" The air was filled with phantoms, wandering hither and thither in restless haste, and moaning as they went. Every one of them wore chains like Marley's ghost; some few (they might be guilty governments) were linked together; None were free." . . . . .
"Whether these creatures faded into mist or mist enshrouded them, he could not tell. But they and their spirit voices faded together; and the night became as it had been when he walked home."

I was enshrouded by fog this morning on the drive to work. Fog is my second favourite dramatic weather condition after snow. So creepy and mysterious the way it changes your surroundings or obliterates them altogether. My advent door has consequently taken a darker turn today with the ghost of Jacob Marley, on his visit to Scrooge to warn him of the events to come. As he leaves, Scrooge sees the air outside seething with miserable phantoms, regretting their lack of ability to do the good deeds they didn't do in life. 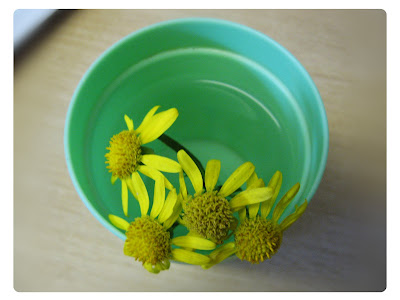 As a contrast to the drama and angst above, I have added these little flowers, a present from Aliya this morning. They are only tiny, but after an hour in their little vase in the kitchen, the room had the scent of honey. 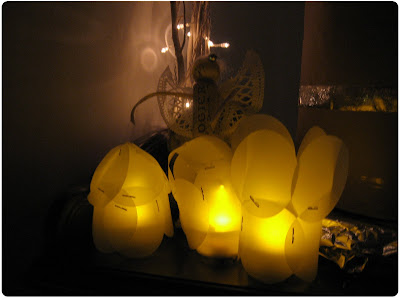 Another quick and easy thing to make-tracing paper circles, roughly stapled together, to soften the glow from nightlights. (LED ones-safety first!)

I agree, fog is a wonderful kind of weather (as long as it doesn't go on for days). As you say, it's spooky and mysterious. We get it so seldom where we are so high and dry that it's as novel as triple digit temps.

I see your flowers and think I should get some fresh ones from the store to bring in some light to these dark days. Although decorative lighting is another good idea.

It is foggy here this morning, and with the snow we already have, it makes for a very mysterious white-gray "glow" all around. I LOVE the nightlights you've made--very pretty & festive. :o) Happy Days, Sarah ((HUGS))

Fog, snow and cats tucked up in cupboards ... what a wonderful world.
Smiles to you, thanks for the ones your images gave me*!*

Amazing that such small flowers should have such a strong scent. How sweet of Aliya :-)
I like your nightlight shades, too - very clever.

Your little lamps reminded my of parchment shades that you made last year - I must look out my led lights!
I knew that I had seen purple potatoes somewhere!!

I would like to like fog but it spells BAD hair for me! But I like the Wuthering Heights aspect it gives to things.
Love your tracing paper lightshades, very atmospheric.