These pictures don't show the wildness very well but it is there. Everything is growing at an amazing rate so I am just lettting it happen at the moment!
Verbena Bonariensis. I love the structure of this plant, and as it is so tall it has the blue background of the sky each day and looks beautiful. It has square prickly stems which are quite raspy on your skin. Some has self-seeded in the concrete where I took the decking up. I should probably pull it up but I am leaving it for now. 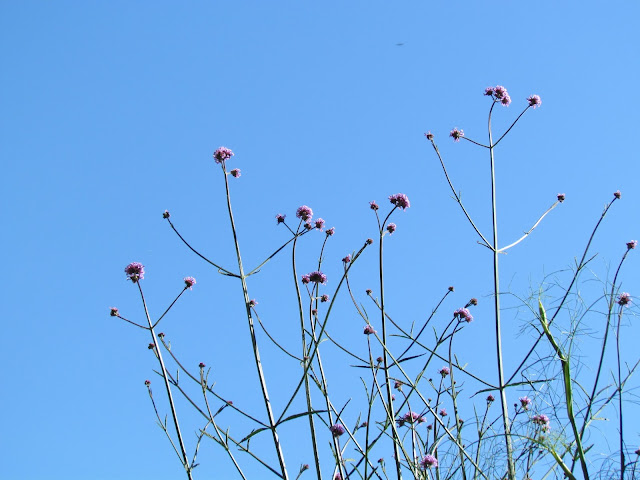 This is about a week ago. The sunflowers in the pots could really do with being in the ground as they wilt each day if I don't water them in time. The ones in the ground are quite tall now and there is not any more room to plant the others. I gave some to next door and have four stragglers left in small pots. I can't wait until they start to flower but hope they get really tall first. 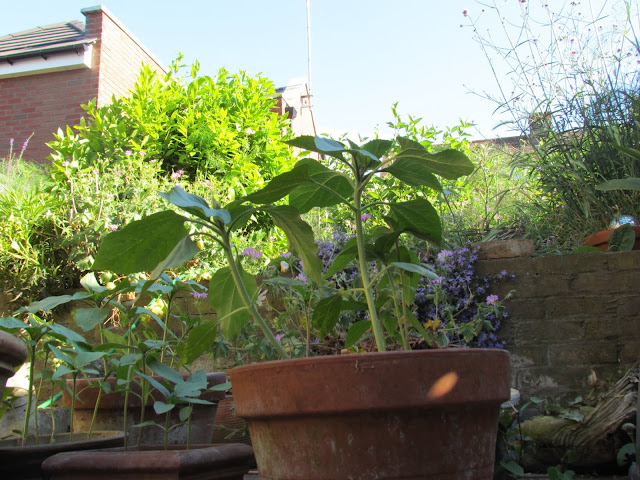 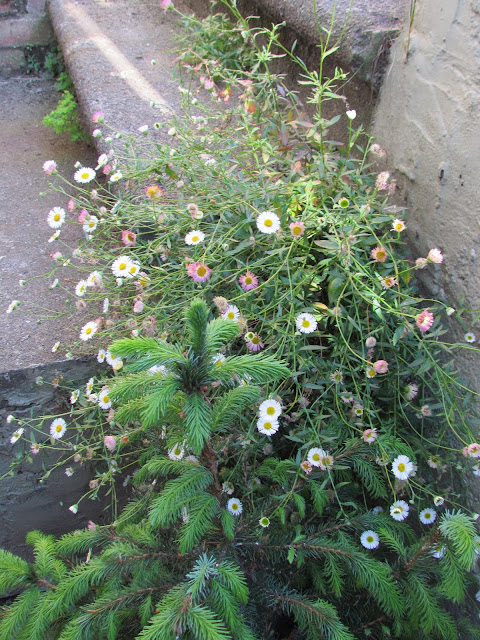 The daisies that grow in the corner of the steps are one of my  favourite plants. They flower for ages and look pretty there. The poor Christmas tree is still awaiting a bigger pot. 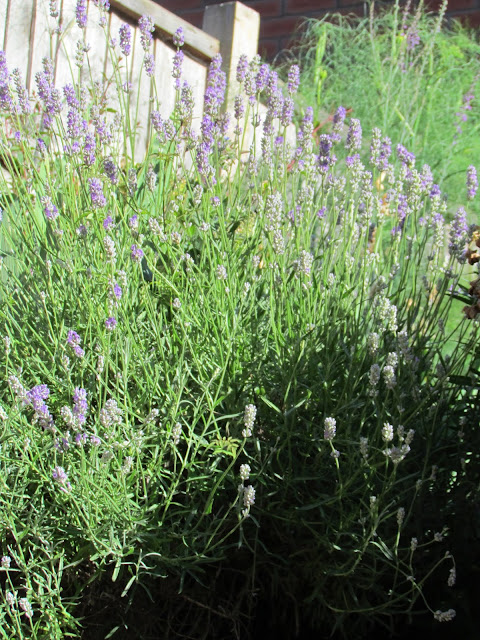 I grew the lavender from seed years ago and it reliably comes back each year. This year it has done particularly well and is filled with bees most of the time.
Posted by Sarah at 14:44 1 comment: 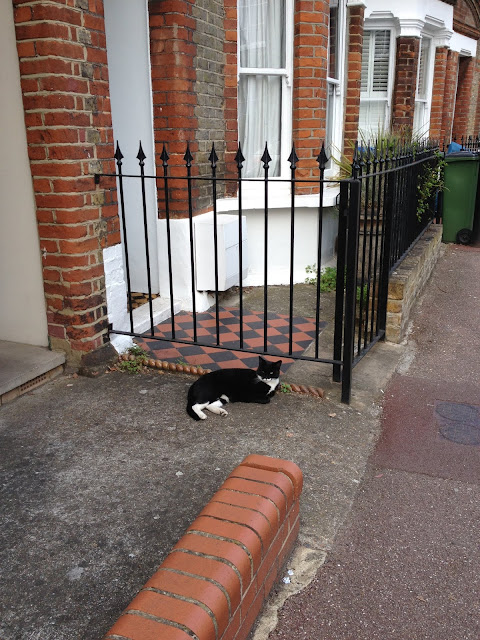 Cat seen on the way to a cat sitting visit. 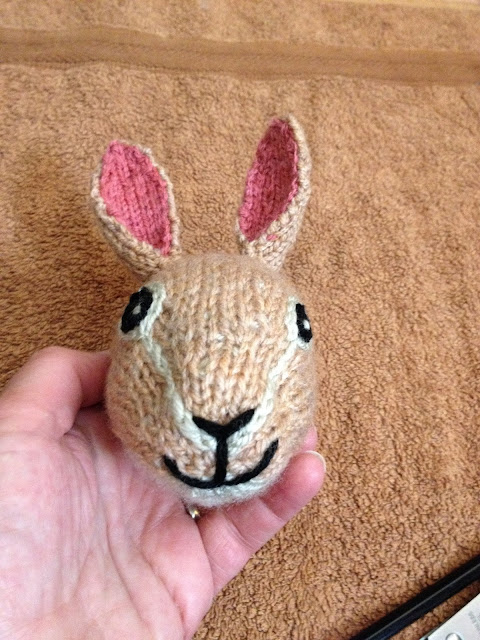 Peter Rabbit's head. He is complete now, but I have no pictures yet. 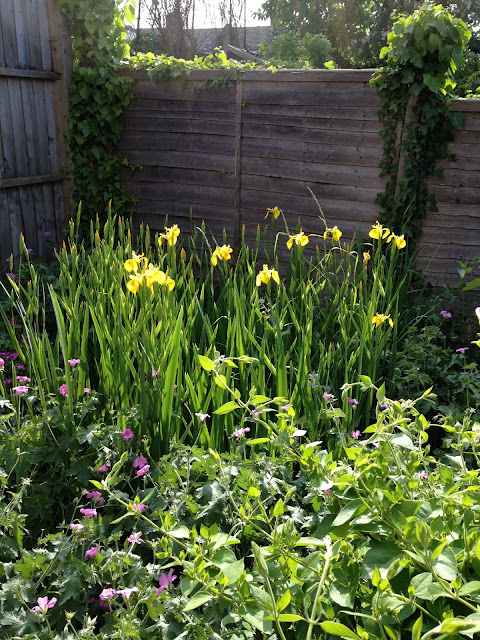 Yellow Flags in the pond, surrounded by pink geraniums. A bit wild but I love it. The bees and birds do too! 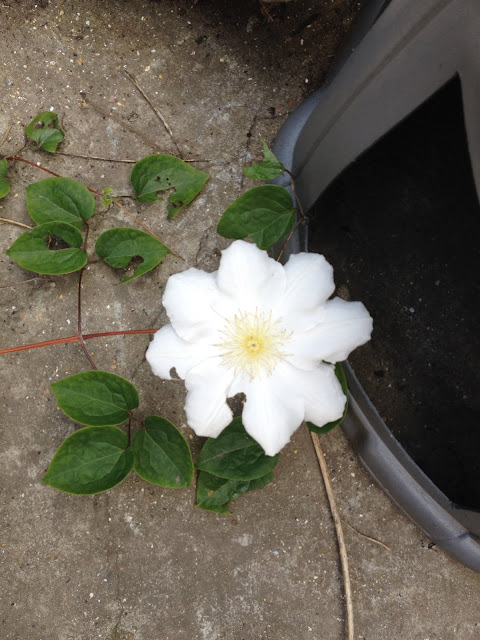 This poor clematis has been in a pot for years. Each year it produces one perfect flower. I really need to move it this year. 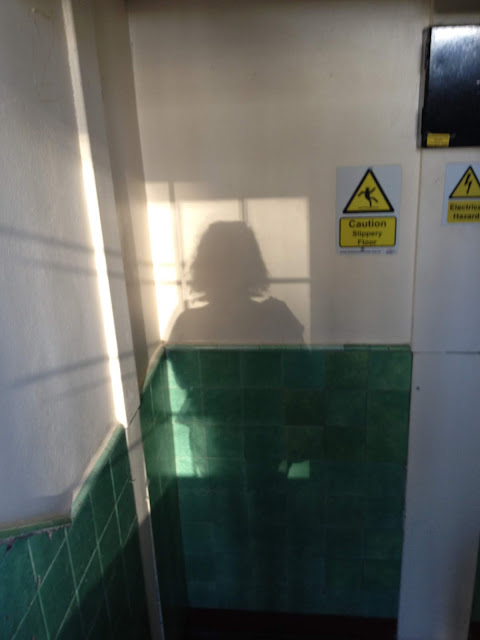 Beautiful green tiles on the way down the stairs from another cat visit. 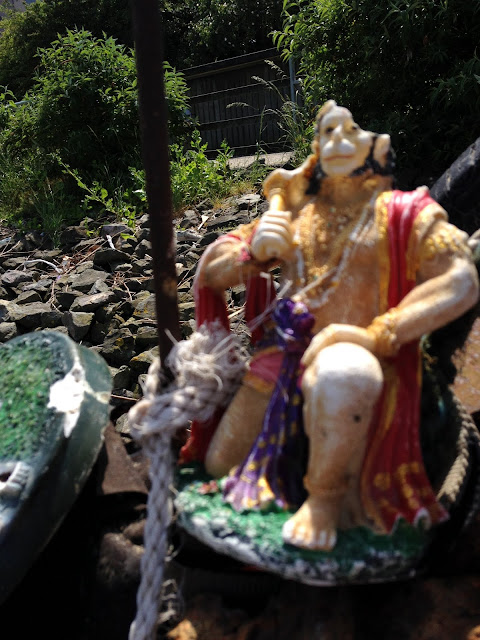 Hanuman on the beach, as part of an ever growing sculpture. 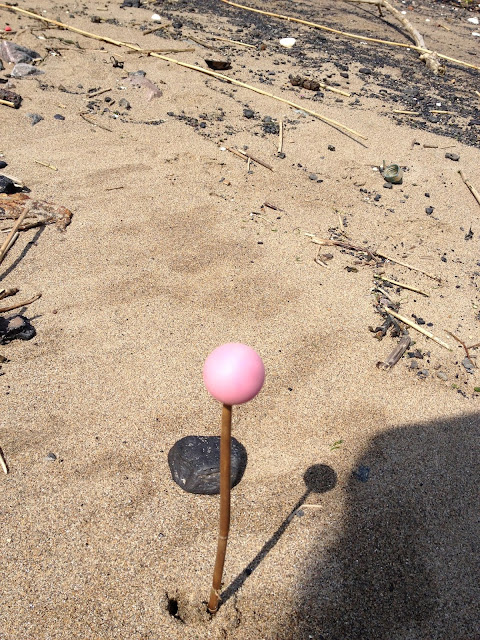 I found the pink ball like this, but didn't leave it there as it was just such a lovely faded colour.
Posted by Sarah at 05:19 1 comment:

A selection of photos from the last two months, part one. Random, just what I like from my camera roll, with only the briefest of explanations.
My Dad's birthday weekend-we had lunch in Lenham where he lives, then visited the summer art fair in the amazing barn in the village. Magpies on the lawn. 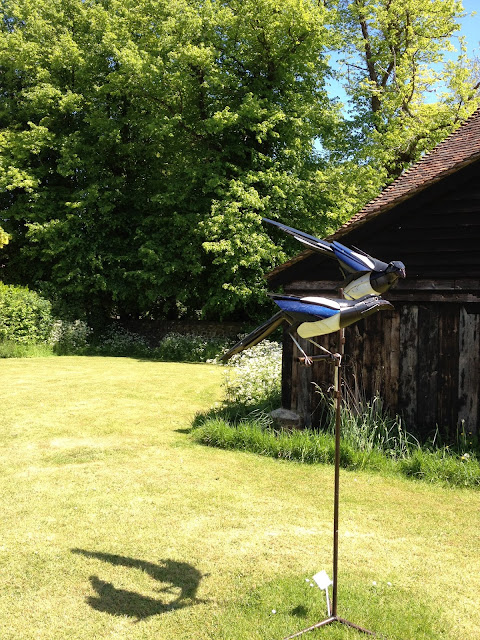 Chickens by the pond. 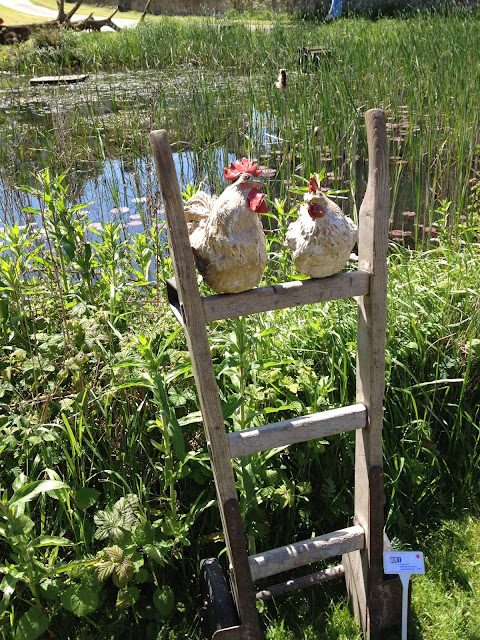 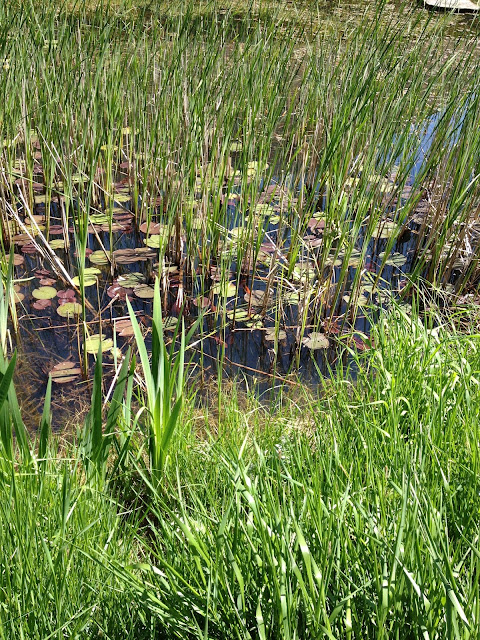 The house next to the barn. 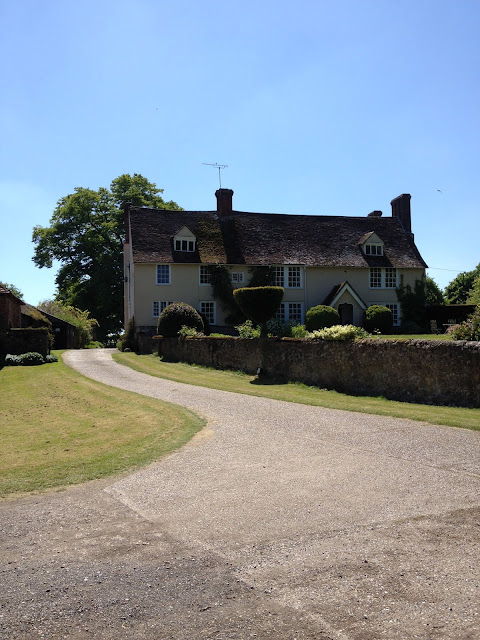 The welcoming creature outside the antique shop. 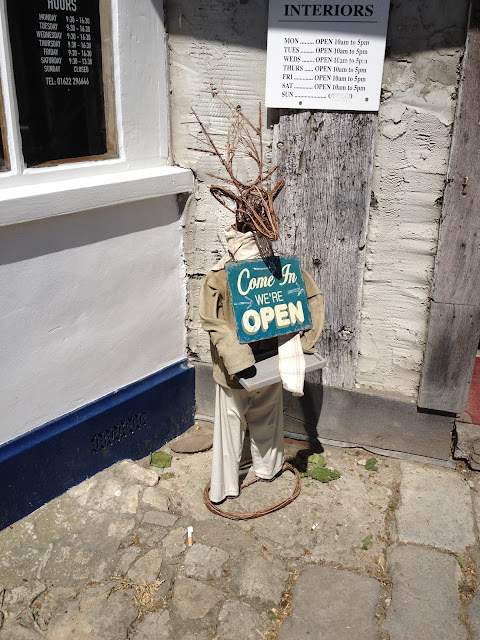 One of my cat clients lives near here and this is the road behind the fancy new flats, where it is (still) free to park. It is occupied by travellers. It is next to an aggregates depot on the river and is not at all fancy, compared to the flats it is next to. As I walked back along it to my car, two skinny little traveller dogs rushed out to greet me. I like the contrast between this road and the next. 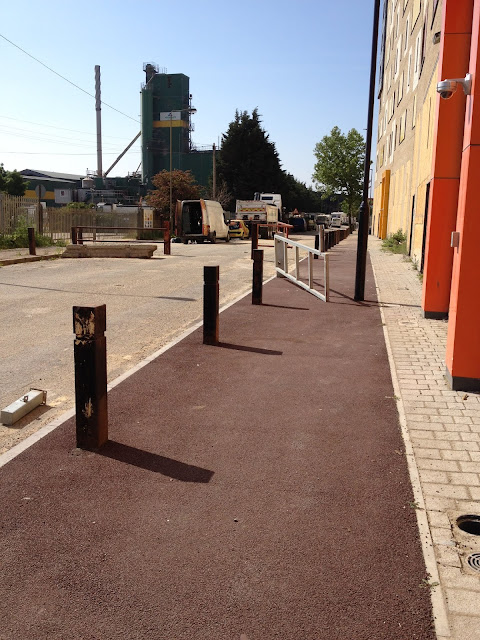 One side of the garden in late April. The beautiful irises are surrounded by emerging fennel, buttercups and emerging salvia, self seeded last year, and a great gap filler. 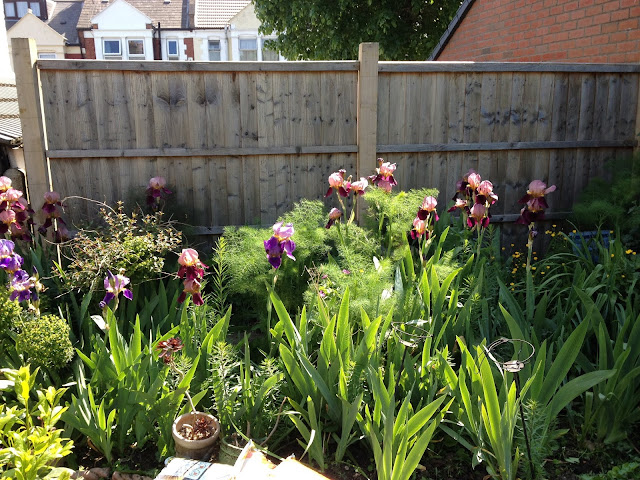 Cassie and Lily on patrol early one morning. We have had night time visits from a boy cat recently, and there have been a couple of times where horrible howling has had to be employed to get rid of him. Here they are investigating his movements. They are on the removed decking area which is made of cracked concrete. I decided to remove the decking as it was rotten, was getting on well with my new crow bar, working into the dusk, when suddenly, I wasn't getting on well, and found myself in casualty for four hours with a cut face, where the crow bar had rebounded from my slippery muddy gloved hands and bashed me. 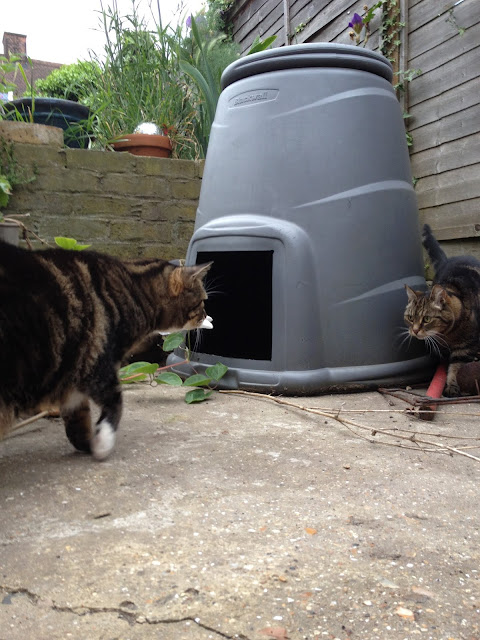 This is the window at the front of our flat, covered in plastic to protect it, and surrounded by new render. I don't think I have mentioned our flat issues on here ever, but we have had some. The simple version is-leaking guttering and roof led to leaking front door and hallway ceiling, and fixing the guttering did no good. The upstairs flat was in the process of being sold, and the owners at the time were unwilling to do repairs, waiting instead for their sale. In the meanwhile, we had about six months of leaking ceiling every time it rained, a hole in the ceiling, mushrooms growing from the plaster and outside the house on the wall, and a massive damp patch on the side wall. On top of this was an endless stream of legal stuff that Andy dealt with, and a massive amount of stress. Finally though, it was sold, and luckily to a property developer. At first he put it straight back on the market and we were despairing, but it turned out that that is just his policy, and, after that he got a great team of builders in and now it is all sorted! The work on the upstairs flat revealed terrible plumbing, which was partially to blame for the leaks. The roof is sorted, the guttering done, and the house is all re-rendered and painted. It looks so lovely at the front. Inside here still needs jobs, but at least the water isn't getting in anymore! 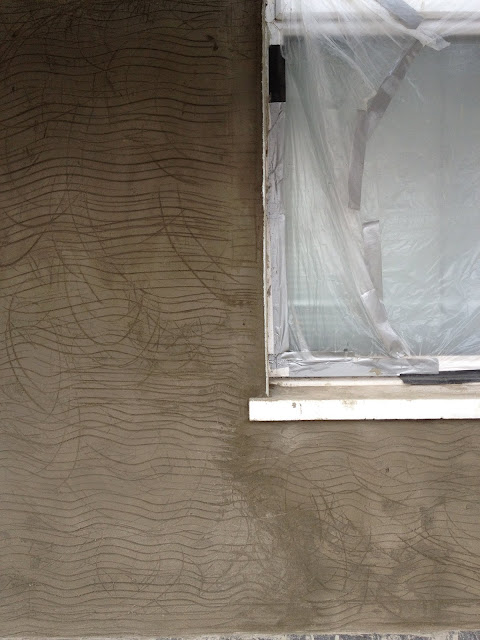 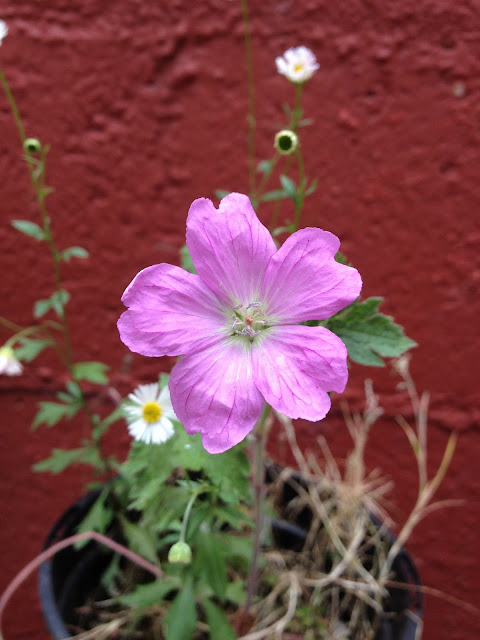