Santa head number one. He now has four friends and is hoping to have a few more. I am making them for another craft fair on the 5th December in Staplehurst Church. Also with Dad. 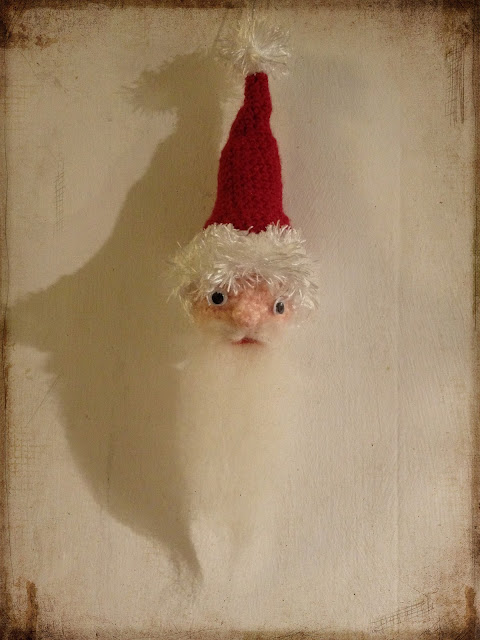 His beard is merino tops, needle felted on at the top. It should stay unless tugged! 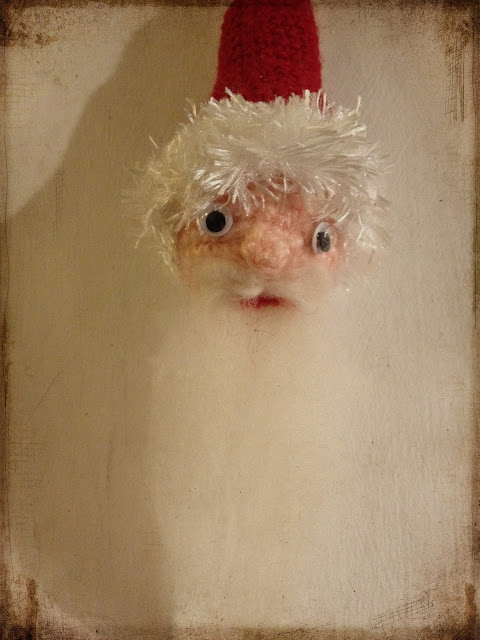 I have come over all House and Garden today, planting daffodils and tulips, and baking an apple, honey, cinnamon and vanilla cake (delicious! and my own invention). I found some ice around the place. I think it was frosty this morning though I didn't see it as I actually had a lie in (something I find hard to do these days which is annoying) 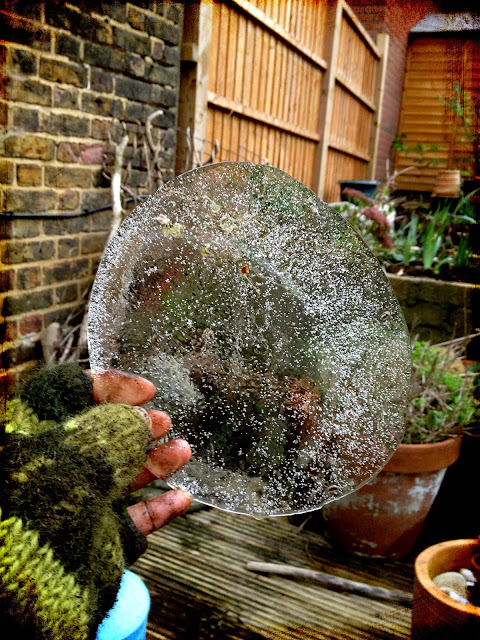 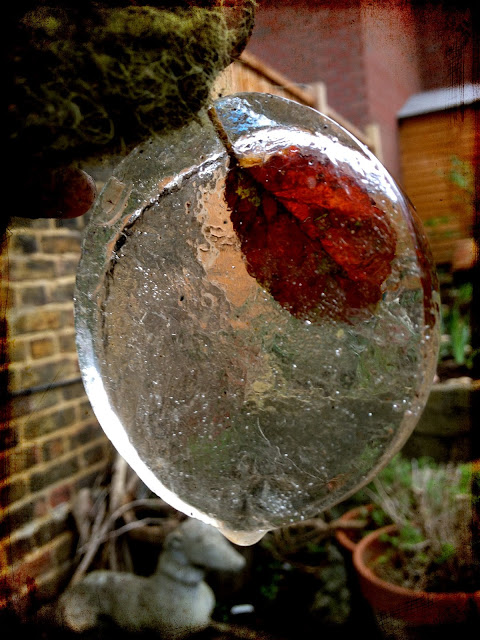 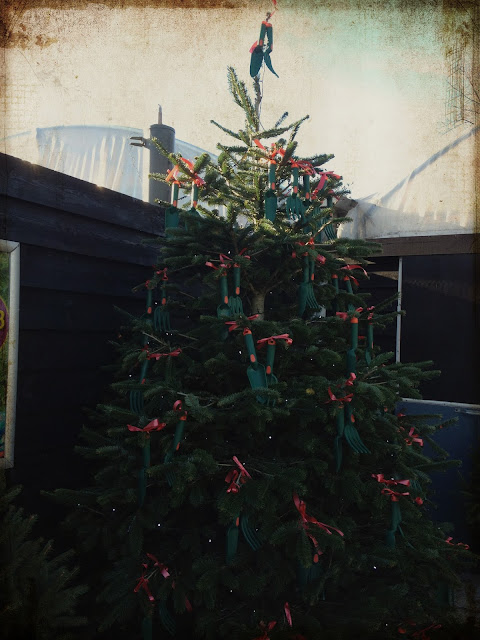 The garden centre where I went for bulbs is stacked full of Christmas trees. I liked the trowel/fork decorations on this tree at the entrance. 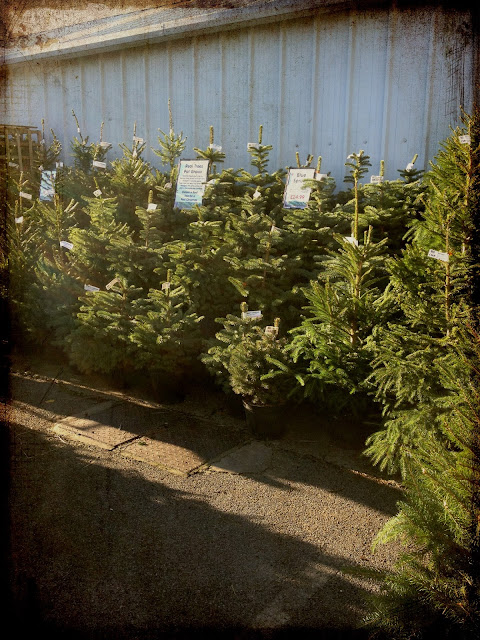 New arrivals-a doll who came in the post for my birthday this week. She is from my sister in law and was found in Corbridge in Northumberland. Isn't she sweet? I love the little French knots for hair. The little bear came from a charity shop. He looked too lonely where he was and I like his sad face and little bow. They go well together. They are sitting on top of a Modern Family DVD so perhaps they are one. 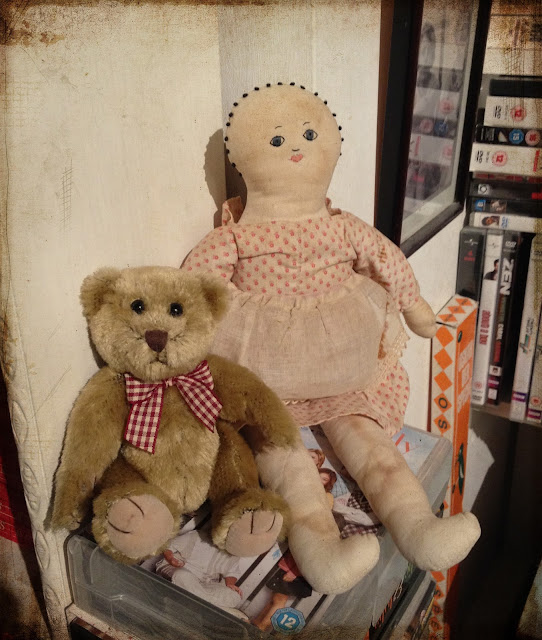 A clip on crochet mushroom. This is another fair idea but it took a surprisingly long time for something so small so has been rejected! 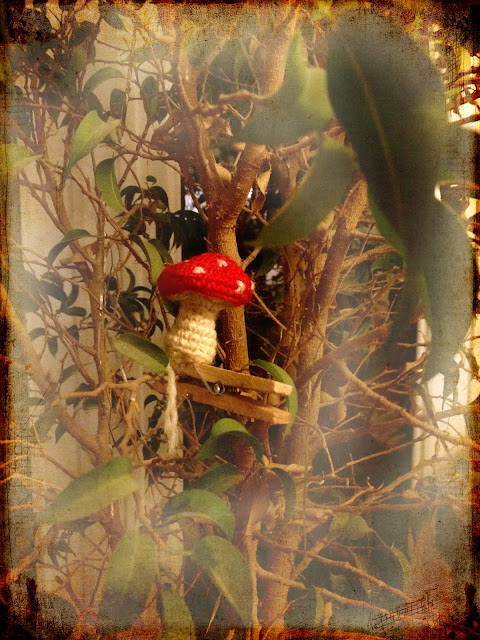 The weather finally became cold this week. This double rainbow was spotted by one of the children in my class on Friday afternoon. It had just sleeted and the sun had then come out. 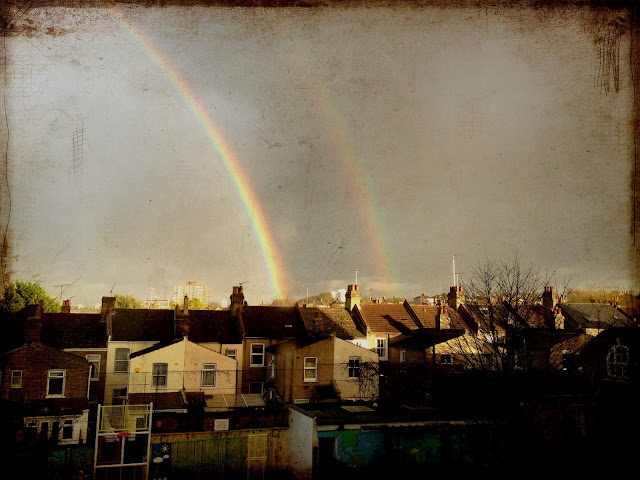 This is Mia the cat, one of the residents of the Cats Protection League shop in Eltham. She was very friendly and followed me around the shop on Saturday for fusses. 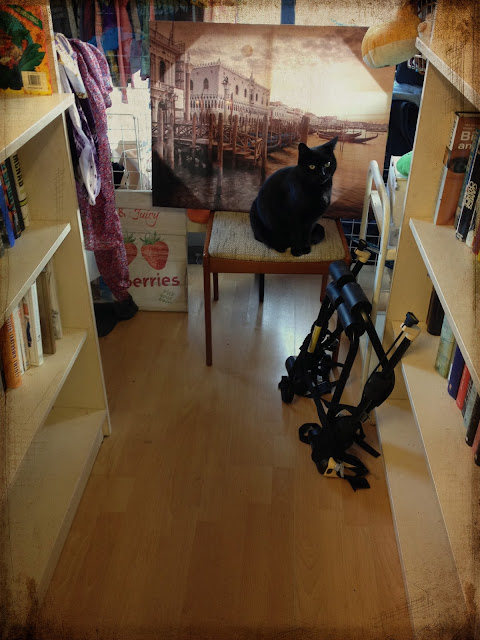 Finally some flowers. I am lucky to be given flowers by four of the girls in the afternoon nursery class every day. One of the girls painted an old bean can silver, so I could use it as a vase. Friday's selection was particularly good! 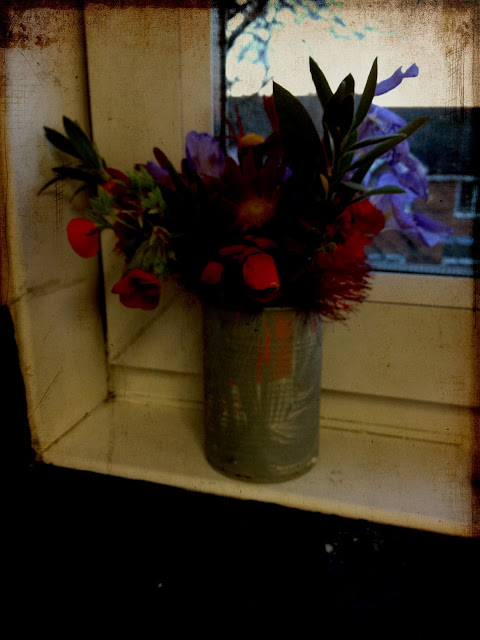 Last weekend was the craft fair with my Dad. It was in this little hall in the hamlet of Stubb's Cross (apparently the name means that there was a gallows there). I went down early on Saturday to set up, and left my stuff there for the Sunday. I took my Mum there on Sunday for the last bit of the afternoon. The last one I did here was very quiet and I didn't sell much. It was quiet this weekend too but I did sell quite a few things and didn't do too badly. I wasn't really doing it for the money, more to spend a day with Dad. I enjoyed the weekend but was really tired as I spent quite a lot of it driving! I went to get Andy late on Saturday night as he had been out in Kent with my brother. We drove back at about midnight and it was fantastic! Hardly anything on the roads and street lit motorway nearly all the way home, plus the radio (which I have only recently got back in my car) was playing really good music. Perfect driving! 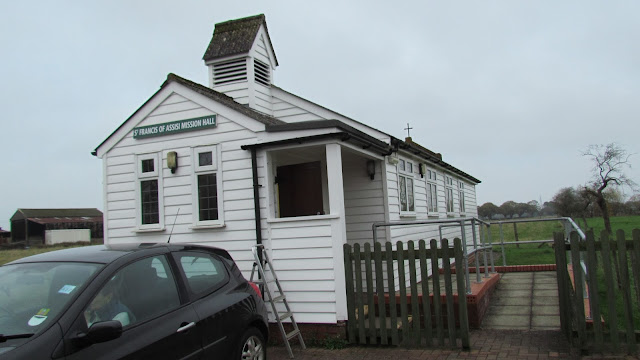 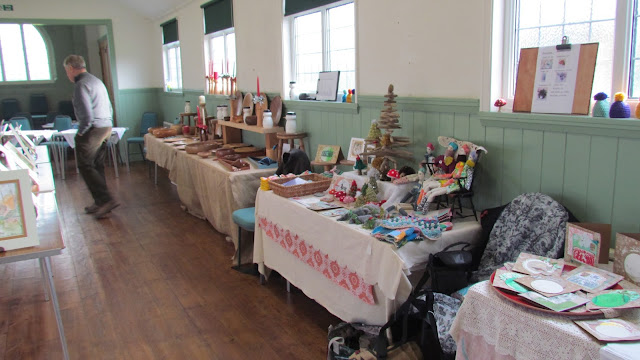 My Dad escaping from the camera! 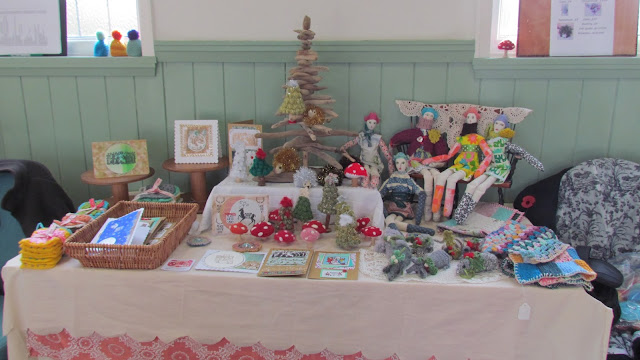 My stall. I sold some cards, all but one of my hedgehogs, a doll, some trees and a Christmouse. 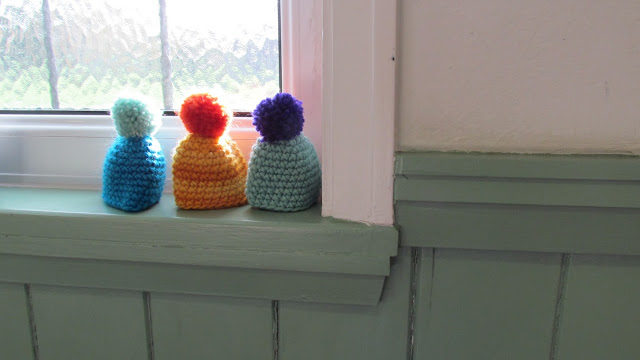 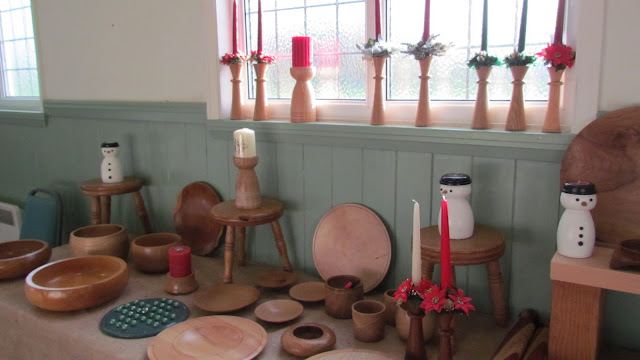 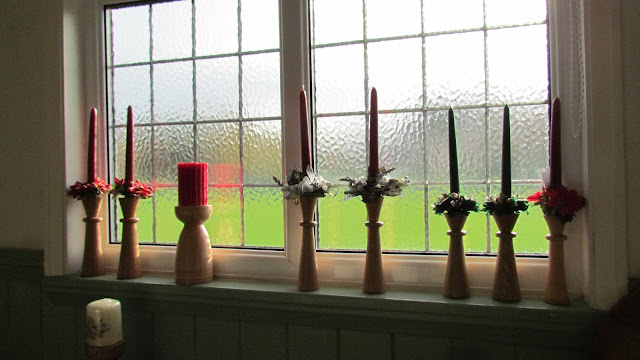 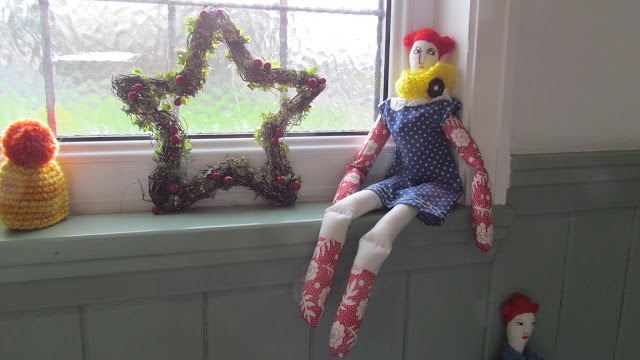 There are sheep in the field next to the hall. I am not sure what breed they are but they are beautifully rounded looking. They are sheltering from the rain here. 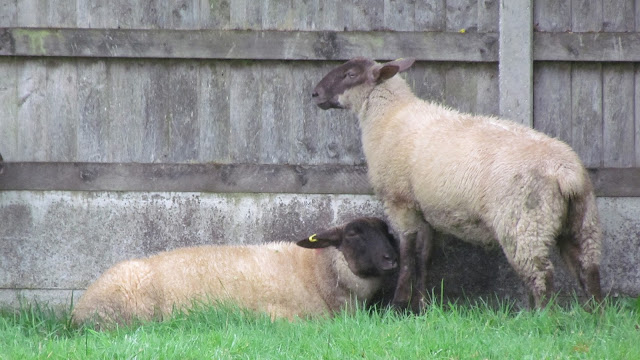 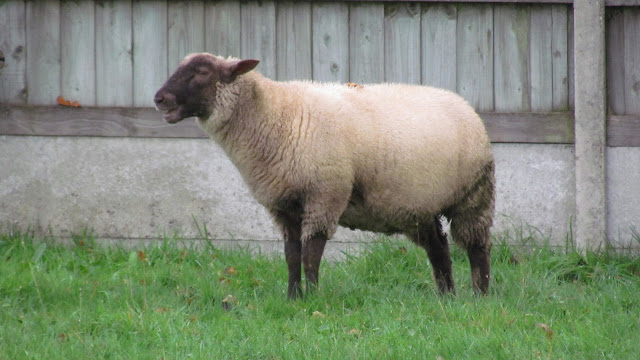 I am doing another fair with Dad in December. It is in a place called Staplehurst. My aunt and uncle live there and it is in the church next door to where they live. I am looking forward to it, and am, yet again, busy making stuff. School is really busy at the moment (when isn't it?) but I am trying my best to fit it all in.