Lots of Photos and Rambling About My Favourite Beach

Everywhere was very windy today, and Dungeness was too. It was fine walking away from the wind but walking back the other way was an eye streaming and ear aching experience! There were lots of gruesome finds on the beach today-gruesome and smelly. I found a bird skull-which still had some fleshy parts on, and I did pick that one up. I have just been boiling it with washing liquid and now the flat smells very bad and I am quite unpopular with Andy, though the cats don't seem bothered! I have put it outside to cool off and then I will see what to do with it tomorrow. Most of the smelly things stayed where they were though. 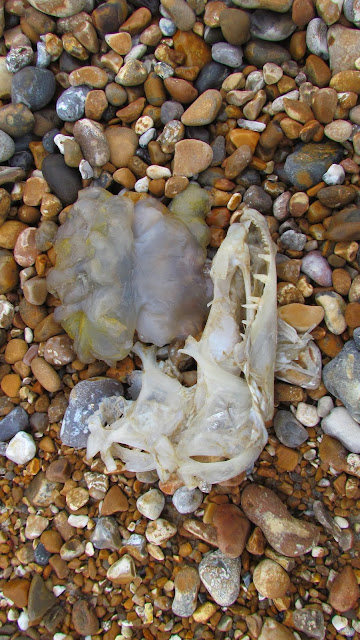 I don't suppose these two met when they were alive, but have ended up sharing a square foot of beach together now that they are not. I don't like to imagine what that fish is with its tooth filled beak. 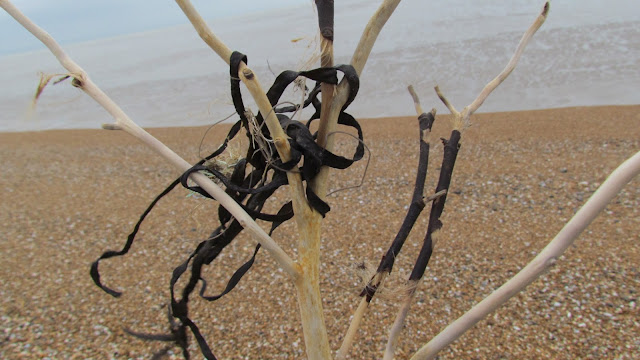 This is just pretty rather than gruesome. 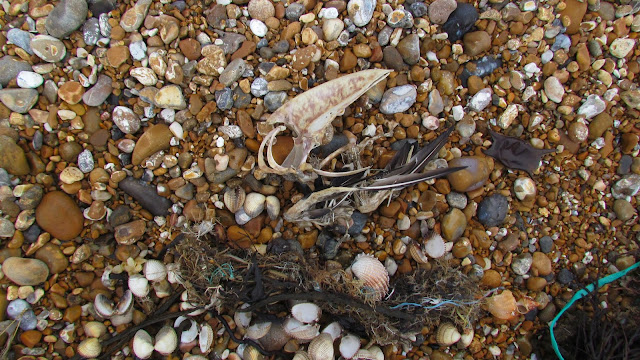 Back to the horror. There were lots of parts of birds like this. There is always a recurring theme at Dungeness, and today it was these, mermaid's purses and beautiful clam shells. 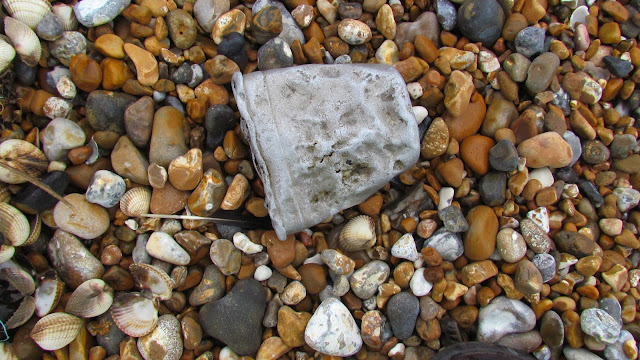 I picked this up but didn't take it, as I was not sure what the mysterious pieces of machinery were inside it, and whether it was made of lead or not. 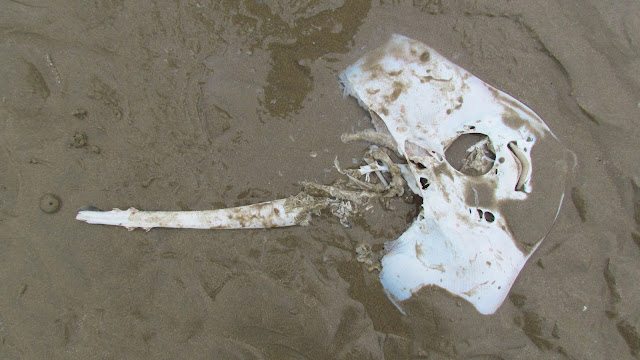 This was amazing-quite large-about two and a half feet long. Its mouth is fascinating. Those things are kind of rubbery, not hard like teeth. I think it is either a Small Eyed Ray or a Thornback Ray. I wish I had turned it over to have a look at its top side. I think they are also called Skate, and are the fish that produce all those egg sacs and mermaid's purses. 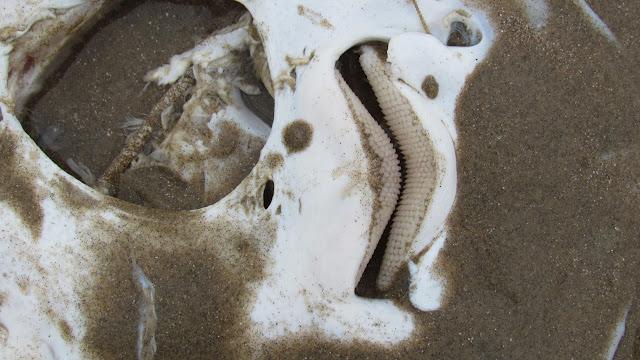 This Cuttlefish has strange sharp, purple marks in it. Not sure what they are. 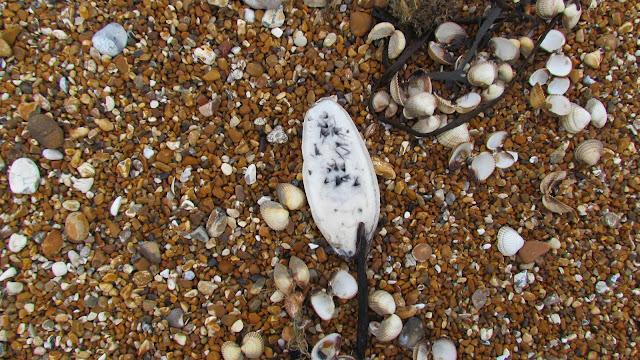 This little skeleton must be a crayfish or lobster or prawn-not at all sure. It was extremely stinky! 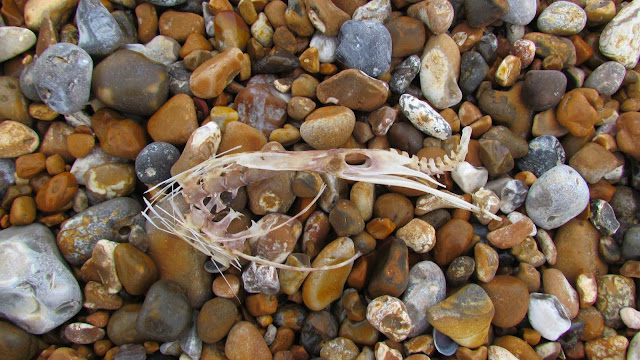 There were lots of dead Dogfish again. Having looked back at all our other visits to Dungeness it seems that this is pretty common. 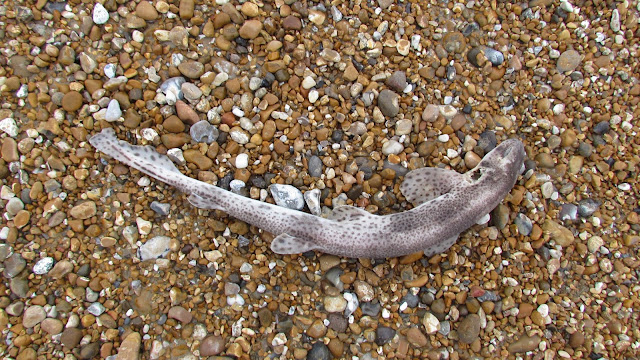 Andy in the distance past a blurry piece of wood. I liked the rust mark and meant it to be in focus! 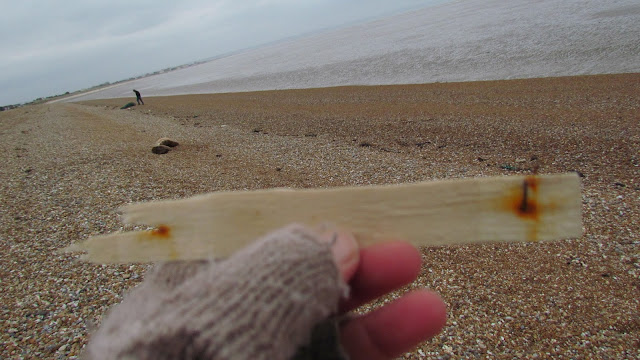 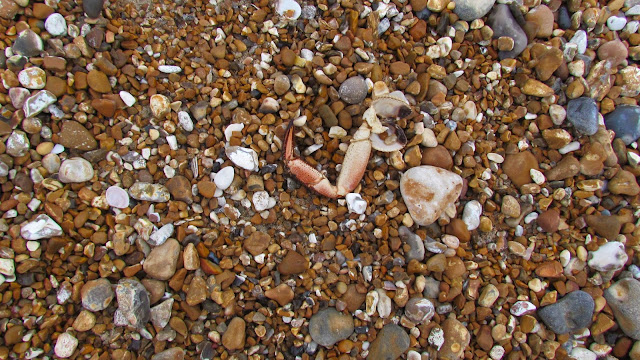 A snorkel mouthpiece. I did actually pick up some rubbish to bring home, rather than leave it on the beach. Maybe on our next visit I will take a bin bag. I would certainly do that if I lived there, as there is so much rubbish. 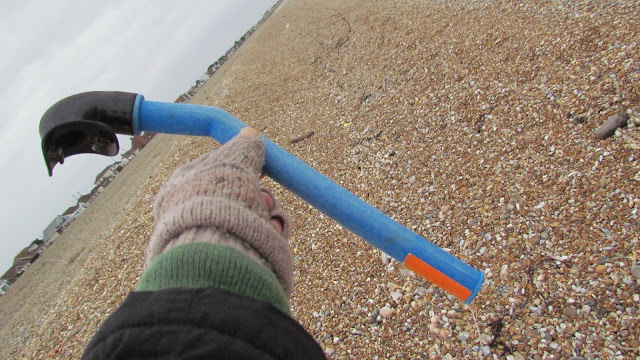 This piece for example, which caught my eye because of the OFFSHOR and SEA wording. 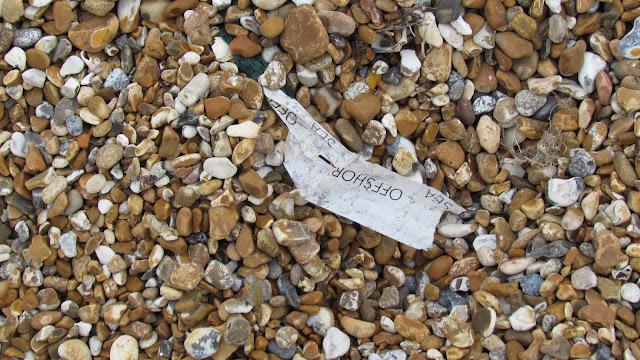 Not sure what this is. Maybe a root. 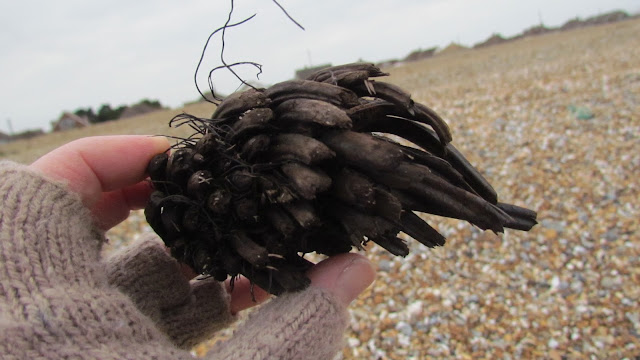 The underside of whatever this is has a very pretty spotty pattern on, like delicate lace curtains or that spotty glass you get in bathrooms. 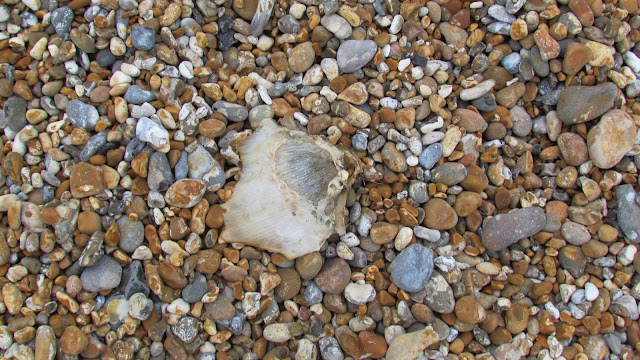 After seeing all those dead fish, we thought we would go and eat some. I wonder about myself sometimes. It was delicious though and the pub was cosy and warm. Then we drove along past the shacks and wooden houses, found the cafe was closed, so went somewhere else in search of tea. 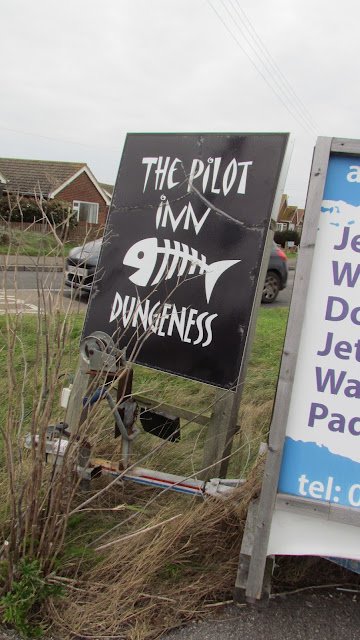 We found New Romney, home of this lovely Norman church, a good charity shop, and a lovely tearoom. Last time we were there we visited the Sainsbury's, but I preferred today's visit. I got some exciting things for school in the charity shop-a monkey toy for next week's Chinese New Year activities, (he is battery operated, and, against all hope he actually works-it is the cutest toy ever) a toy Henry Hoover, and three of those magnetic drawing boards that you then swipe a switch down to clear. 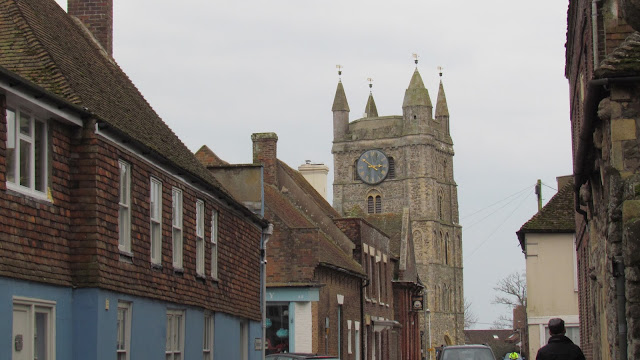 We parked in a back street, and walked past this lovely old building on the way to the main road. It said 'The Priory' on it, and I had a strange little conversation with a lady who saw me taking pictures. She said she thought that lepers were kept there-but she couldn't remember the name of the disease, and thanked me for helping her to. 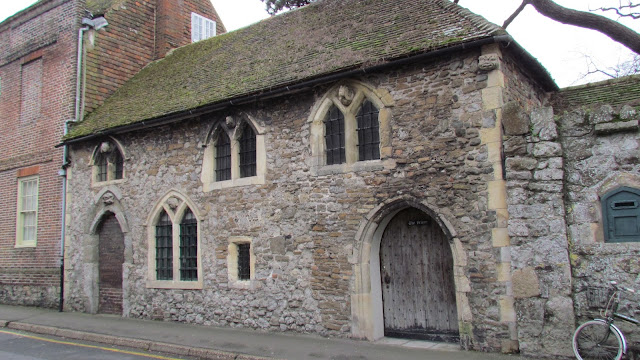 It had some very ugly but endearing gargoyles. 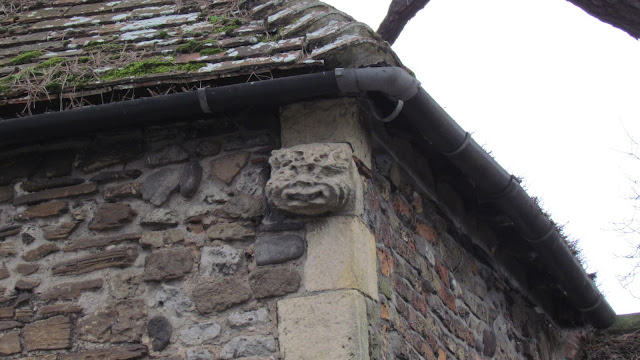 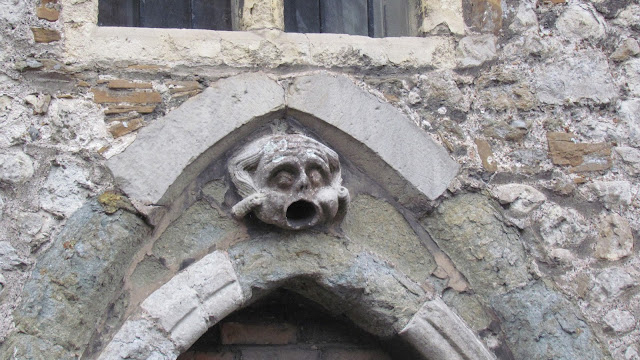 I liked the bike parked in front of the wall. It reminded me of France. 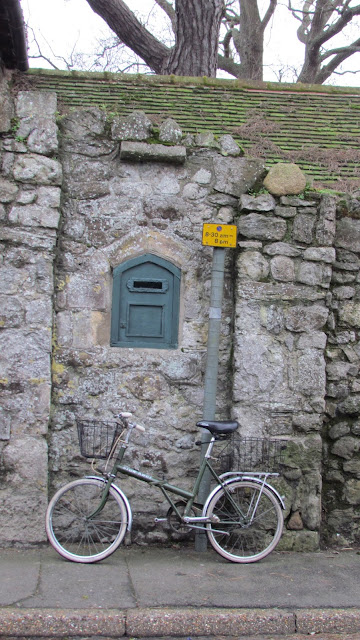 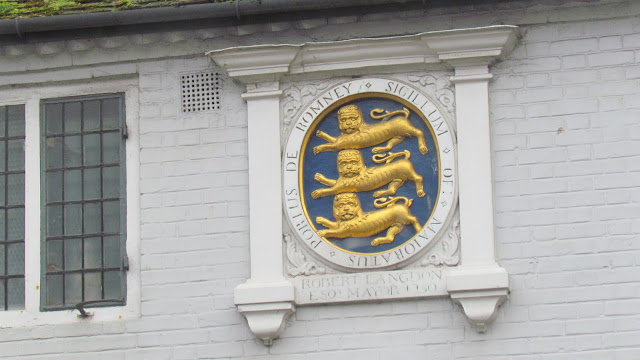 New Romney is one of the Cinque Ports, and I think this coat of arms is related to that. I am not sure though, as some of them have boats instead of the back end of the lions. I have just spent an interesting half hour looking at lots of information about them but it is too much to share here! 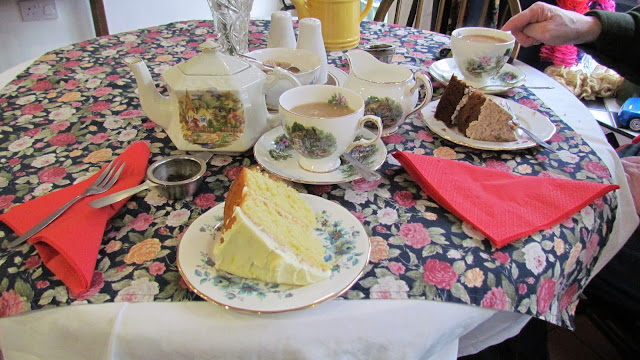 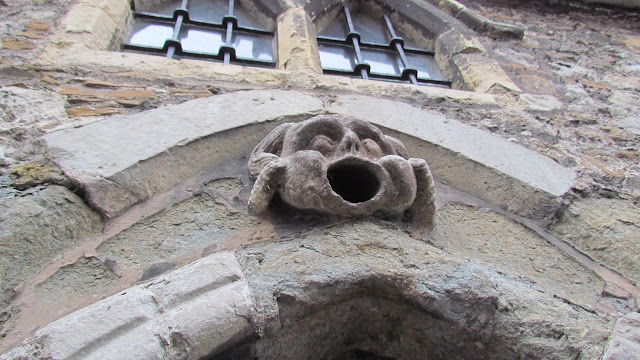 I found all of these dolls at the weekend in the charity shop. They are all destined for my Etsy shop, apart from one that has a problem with her face-it seems to have come undone at the side! I am also keeping the tiny one. The little Welsh one below has already been sold-I was looking out for Welsh dolls for a previous customer, so was happy to find her. I love these souvenir costume dolls. They have such  detail. I particularly like the ones with the painted faces. I also like dolls with the open and shut eyes. They are quite scary but cute. I have a whole collection of Scottish dolls like this which stand on the bookshelf and stare across the room. 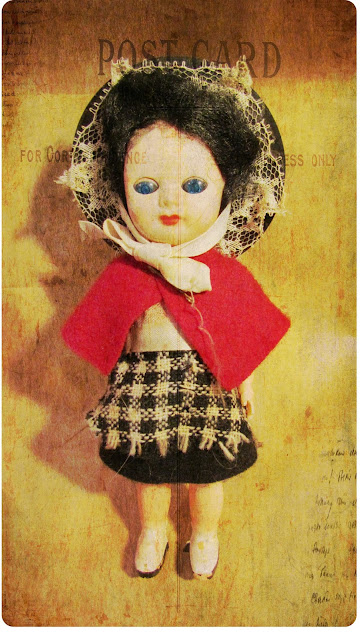 The one on the right below has Napoli on her apron-in very faded writing. They are both quite small-about five inches tall. 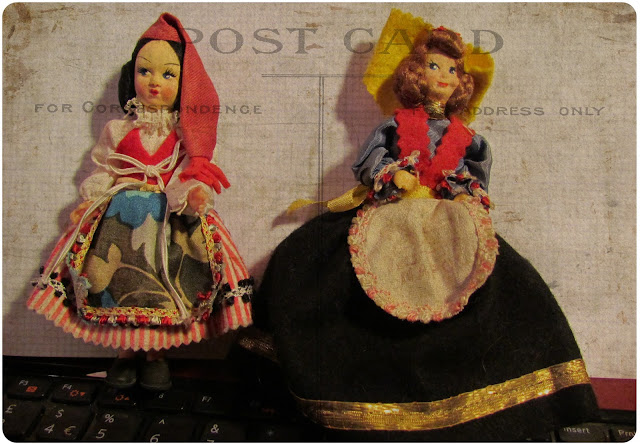 This one has the face problem. 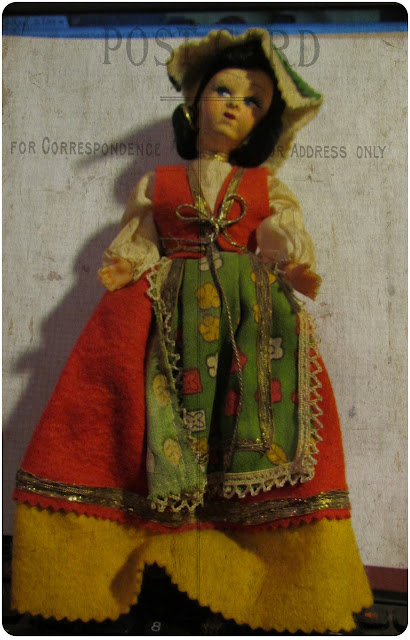 This one is about two and a half inches high. 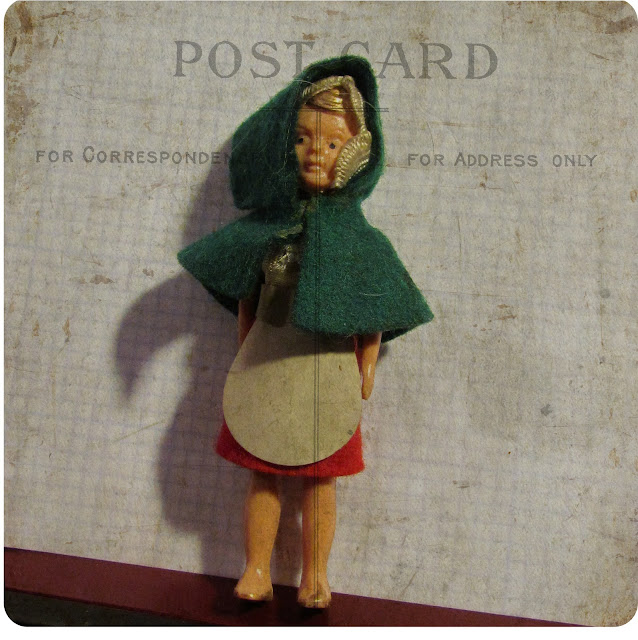 I love this one as she looks so happy. Her arms do go down, but she was cheering like this when I found her, so she still is. 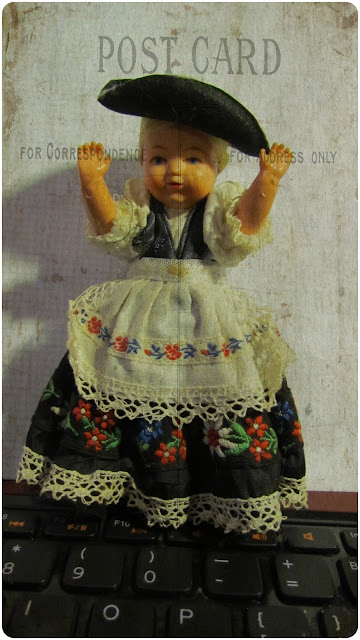 This doll and her baby are from Multnomah Falls in Oregon, which is the picture on the screen behind her. It looks lovely, but scary-a really high waterfall with a tiny bridge crossing it about halfway up. 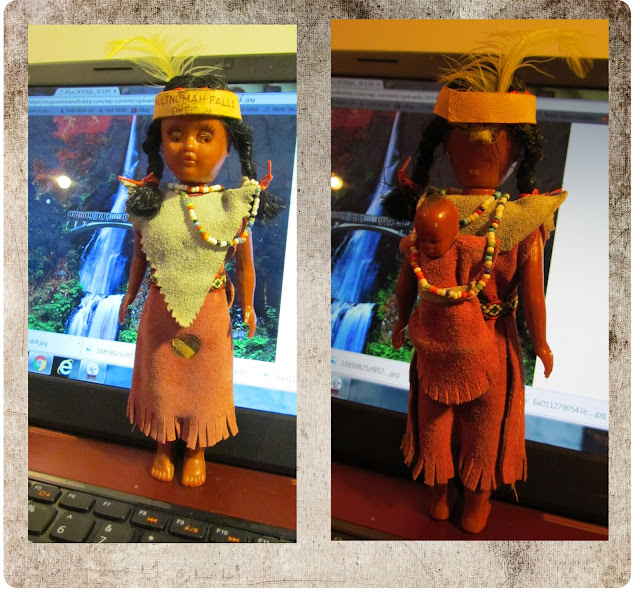 Although she is a bit newer than the others, she still has the attention to detail in the little bead string, and the soft, real suede dress. Love dolls!
Posted by Sarah at 13:01 1 comment: