Paddington Bear is Nearly There!

I have been making a crocheted Paddington bear, and he is nearly finished. I am not sure that he looks that much like Paddington though! I have been following a pattern I got free with a magazine. Well-mainly following it, with a little bit of improvisation, such as making a second hat, as my first one turned out far too small. I decided I wanted these eyes, rather than black ones, as they are more like in the film. I had to stop and start the pattern to make a hole, then regulate the holes by crocheting around the inside of them. I might yet embroider some dark brown around the eyes to give them more depth. So, although not perfect, he is making me happy to look at! 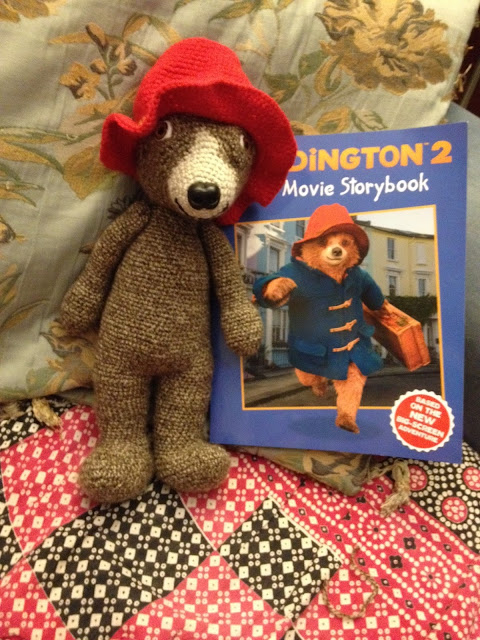 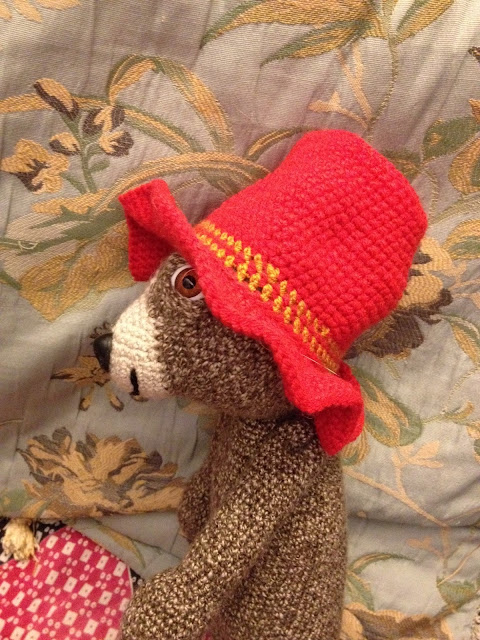 Below is how I made a guide for sewing the mouth. Normally, the mouths I sew are far smaller, and I don't need to do this, but this mouth was big! 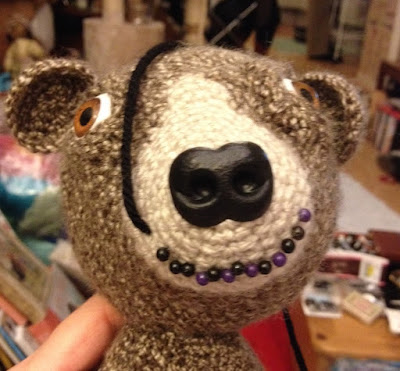 Tomorrow evening I will start on his coat. I would also like to make some prison clothes, like in the film, but have yet to find some suitable fabric. I have got an old t-shirt that might do. I also need to make him a marmalade sandwich to keep under his hat for emergencies!
Posted by Sarah at 15:14 3 comments:

The week before last, I went to Jenny's, my sister-in-law, with Linda Sue, for a crafty day. We did needle felting. Linda Sue made a flower, Jenny made a heart, and I made a little robot. He started a minor obsession with making felted robots and here they are! 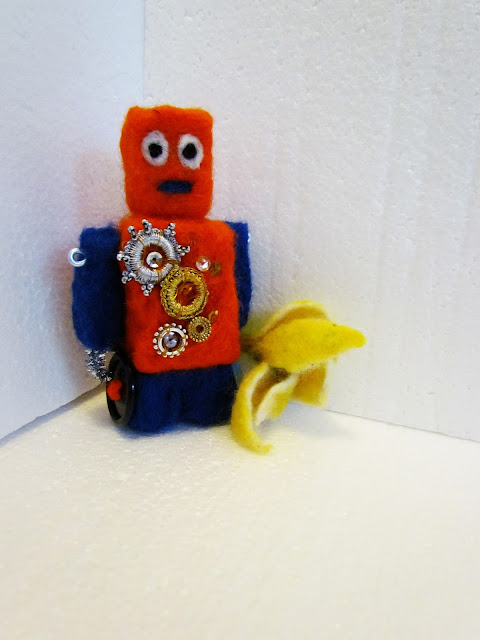 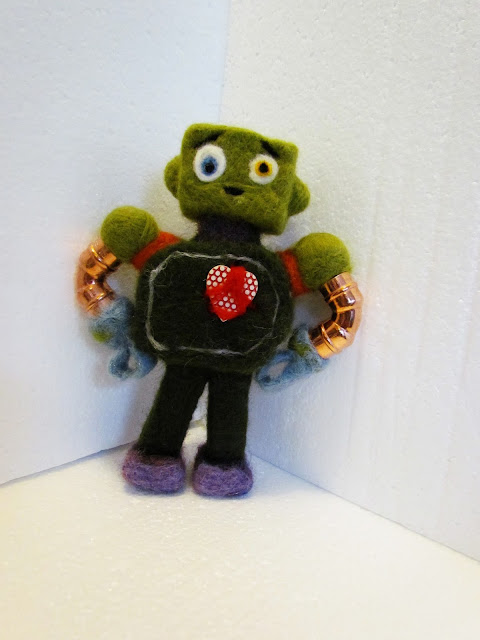 Robot number two was inspired by the tin toy type robots of the fifties, and by the fact that I found these copper elbows, (their real name) in B and Q. 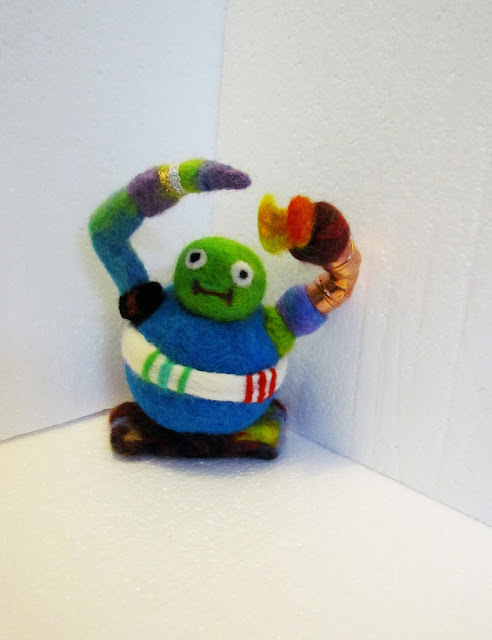 Number three is inspired by the latest Star Wars, the little BB-8 robot. Not the colours but the shapes. The one copper elbow caused a balance problem. I have had to make him a little ramp to correct this, so that he will stand up. 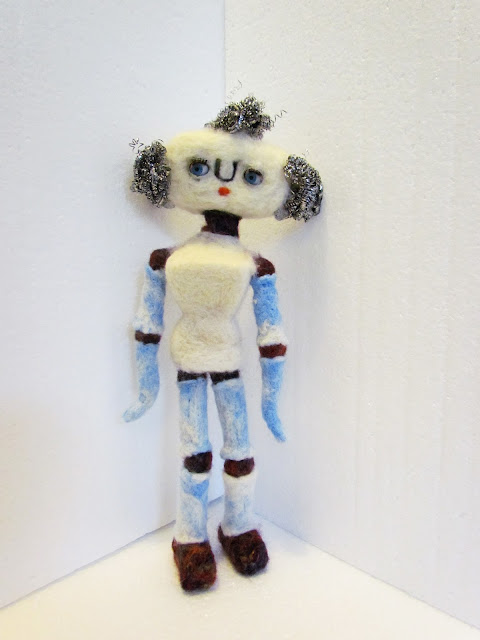 This robot is inspired by the ones that look a little like humans, and have that strange way of walking, like Asimo. I wanted to use some open and shut doll eyes I have had for ages. They were quite hard to put in. I didn't want to use glue so I made a hole and lightly felted it smaller around the eye once it was in. That wouldn't have held it though, so I made a little flat piece of felt, cut a slit in it, put that over the eye and lightly felted that down. 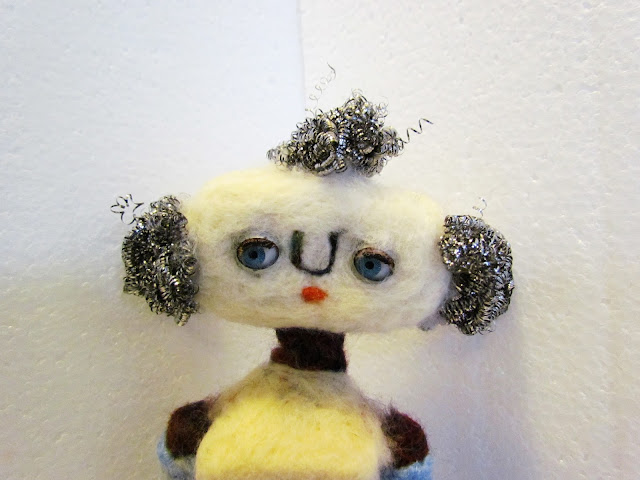 Her hair is made of metal scourer pieces. It is held on by little pieces of roving felted through the gaps, being careful not to break the needle. 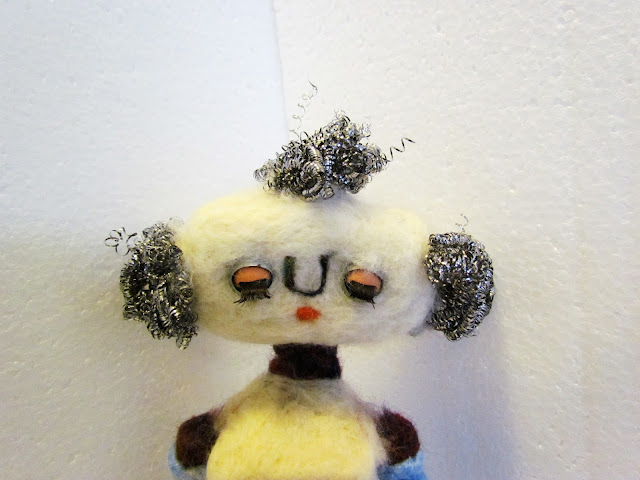 I am pleased with the way she looks, but have made her too tall and skinny to stand up on her own. I will need to make her a stand of some sort. 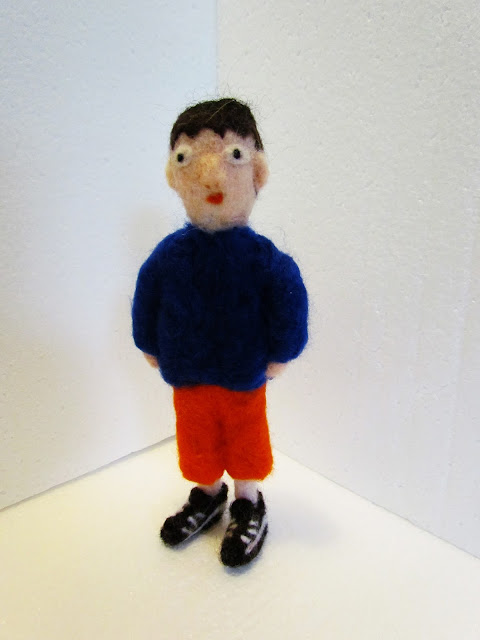 My last robot is actually a boy pretending to be one. This is inspired by an episode of  "The Flight of the Conchords", where Bret and Jemaine are dressed up as robots. 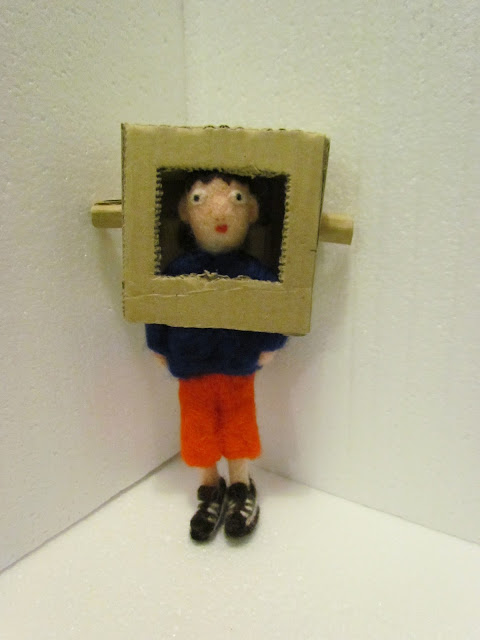 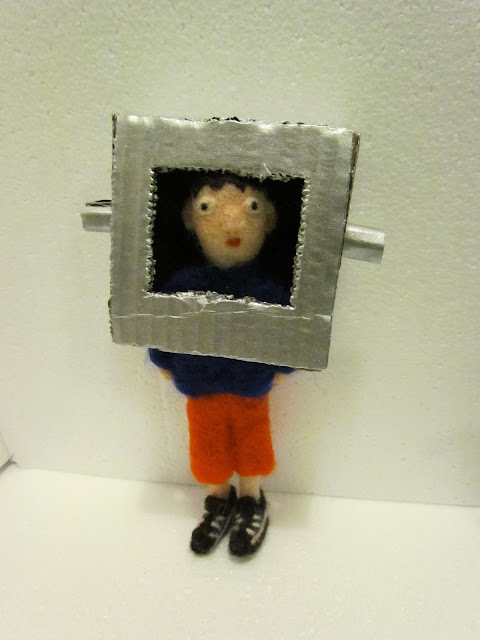 The Humans are Dead. 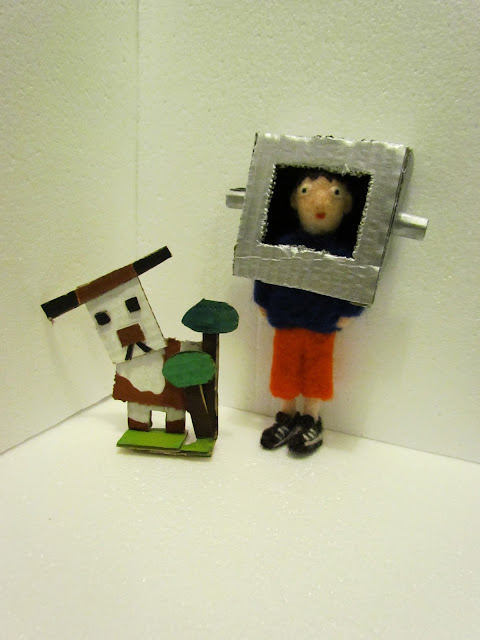 The little pieces of cardboard left over from making the robot head made this cow/dog. 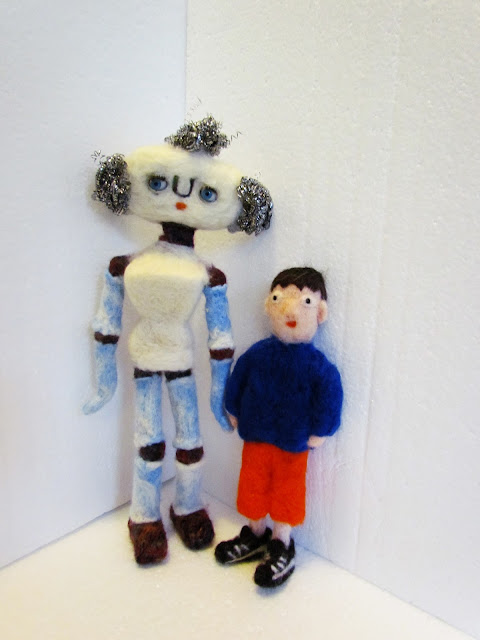 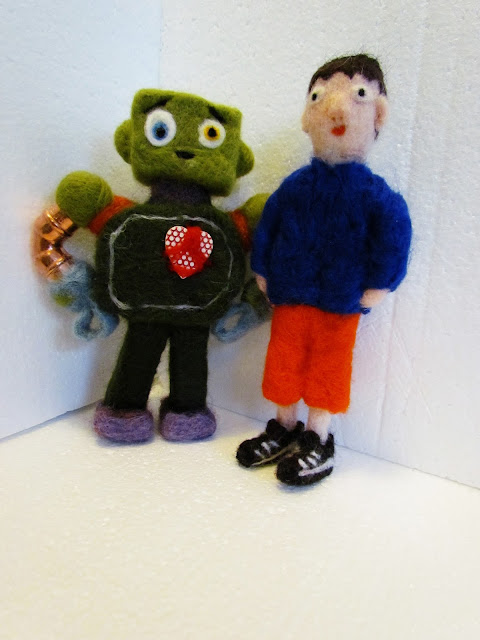 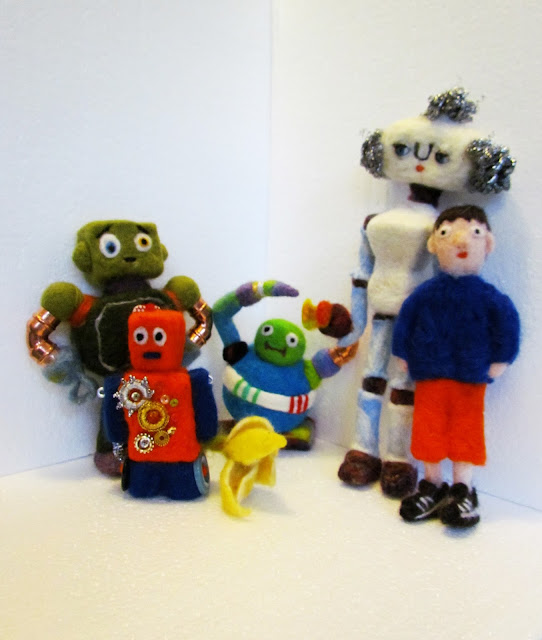 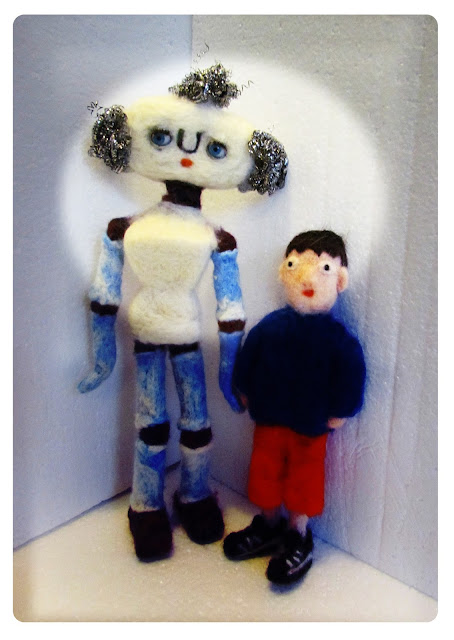 I went to The Museum of London yesterday with Linda Sue. There were lots of school parties there, some more interested in what they were seeing than others. The most enthusiastic child I heard was a girl who had spotted some cherubs in a painting. "Naked baby angels!" she exclaimed joyfully, pointing them out to her friends and adult. I recently found this lovely bowl with four of its own naked baby angels holding it up. It is Dresden china, and if the cherubs were complete with their legs attached it would be worth lots of money. It has been dropped at some point so all the legs are broken off. The faces and tiny hands are perfect though and I love it!
I 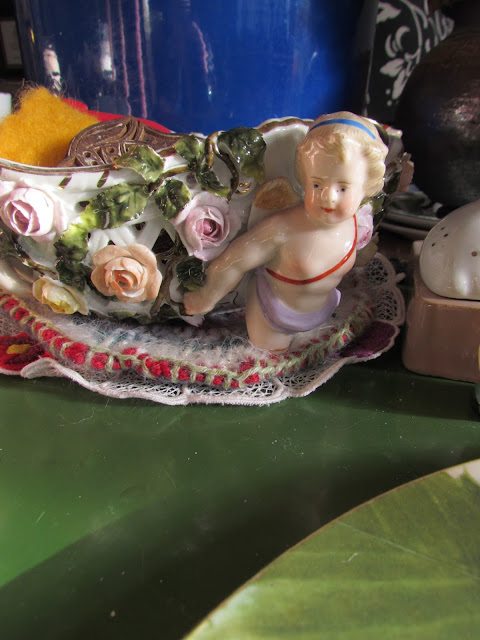 Linda Sue and I also went to Portobello market recently. I found this tiny clown. He is apparently 1920s hand painted china, if the seller is to be believed. I like his cheery little face. 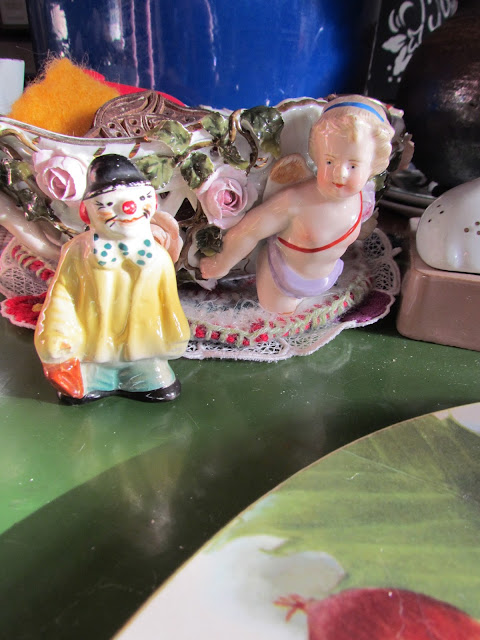