A few photos from the last couple of weeks... Ones I particularly liked. 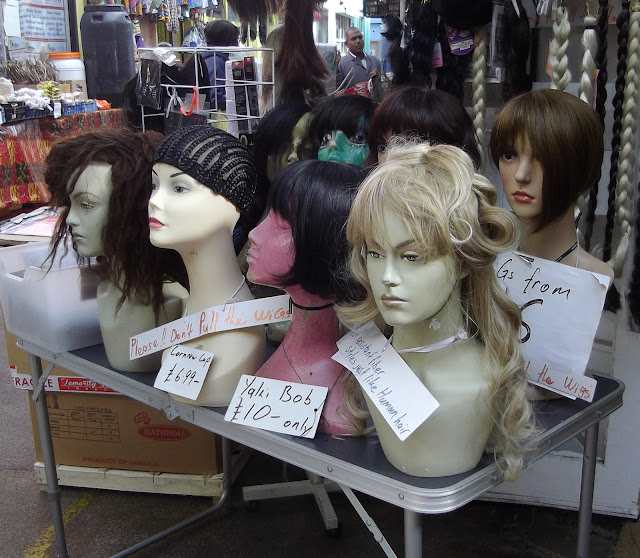 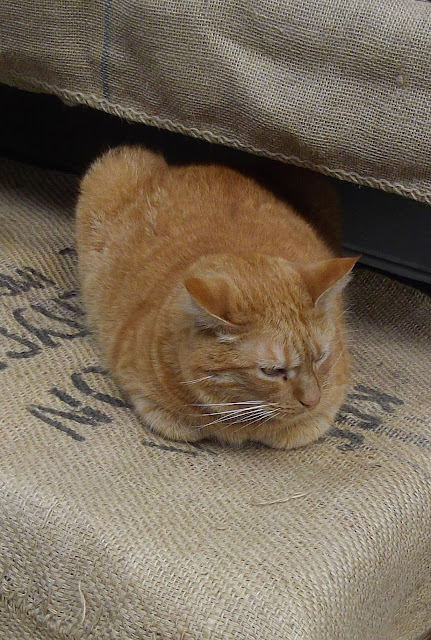 Completely laid back cat in the same place. He ignored both of us taking photos of him, as did his friend, another cat. 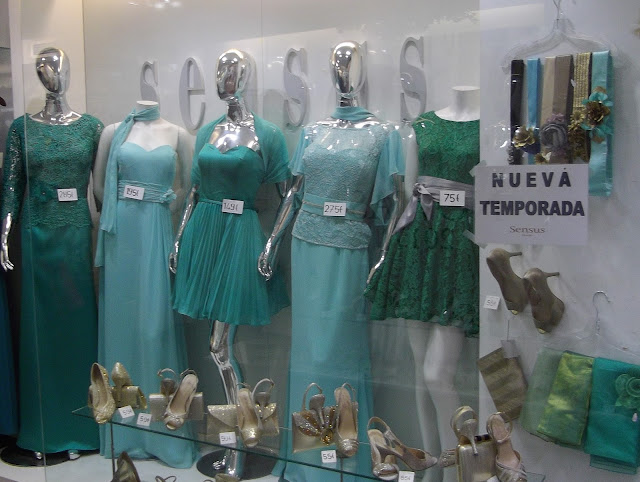 Dresses in Palma, Mallorca. Love all the colours together. 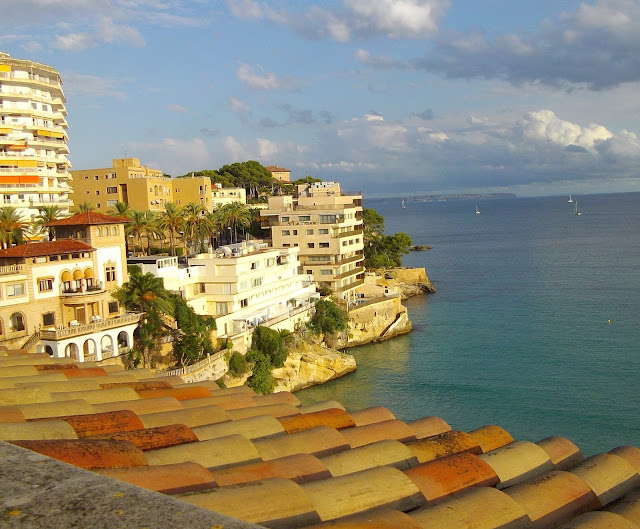 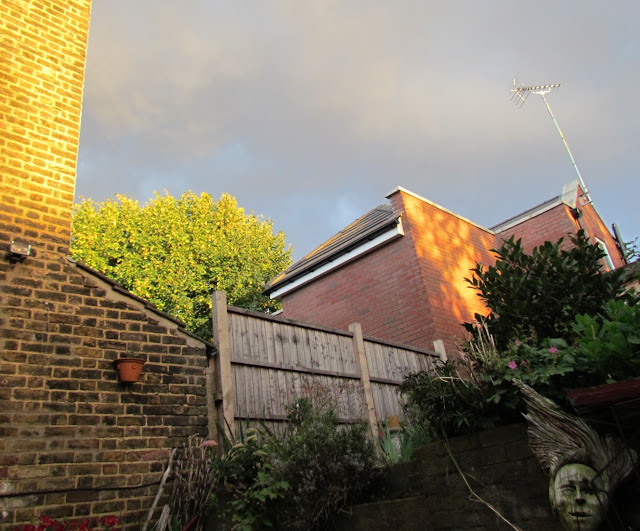 More beautiful evening light at home. It looks like a light show on the wall! 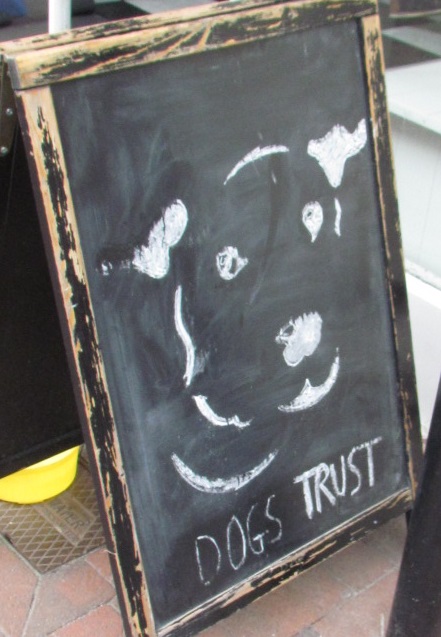 One of many charity shops in Tunbridge Wells, where Linda Sue and I went on Saturday. 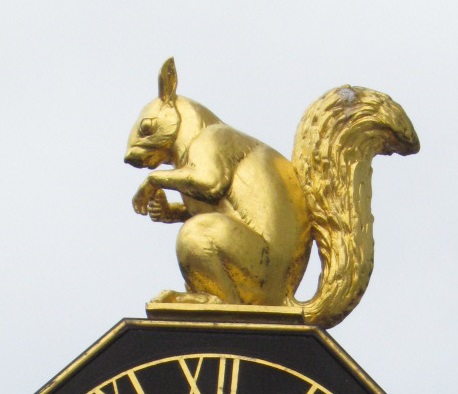 And a squirrel perched on a clock, also in Tunbridge Wells.
Posted by Sarah at 11:34 No comments:

One of the many bees I am making for a craft fair my Dad is doing. He asked me to make some to enhance some honey pots and dippers that he is making. I have made a mixture of crocheted and felted ones. I know bees dont have little pink mouths but I am going for cute rather than real. 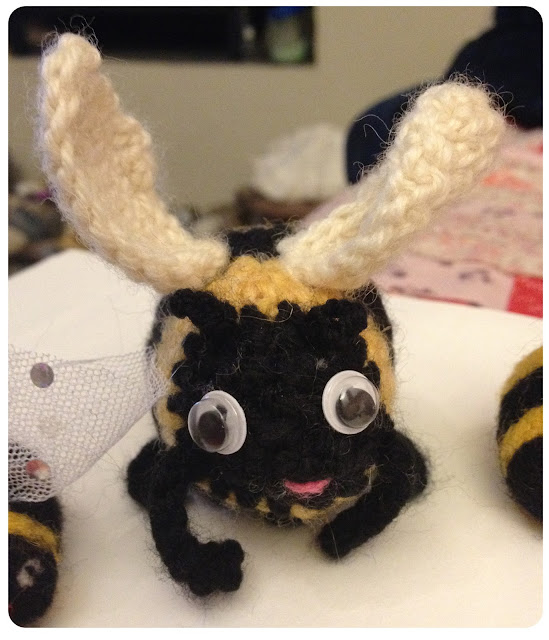 A few recent drawings. This is a cat toy from memory-I saw it in Palma airport but didn't buy one. 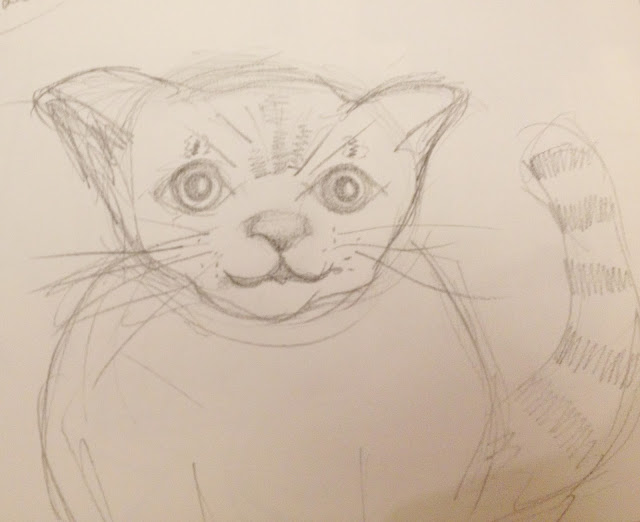 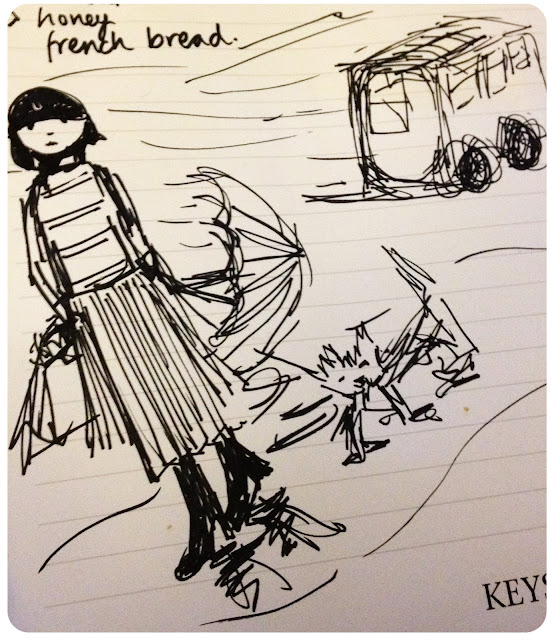 And one in my journal-the buildings in the background are remembered from Palma. 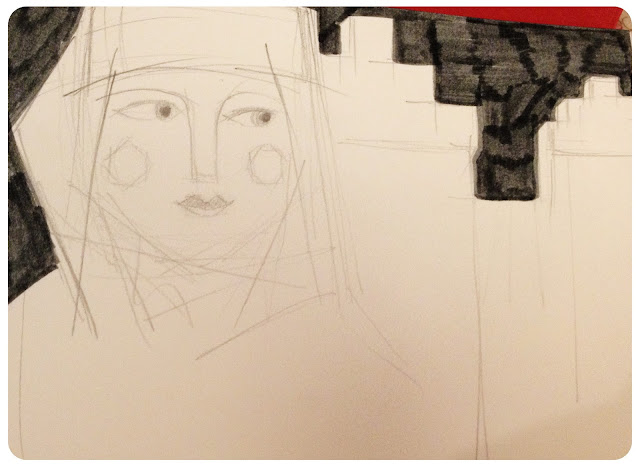 A cover of a book I managed to leave in the shop. I love these type of covers. 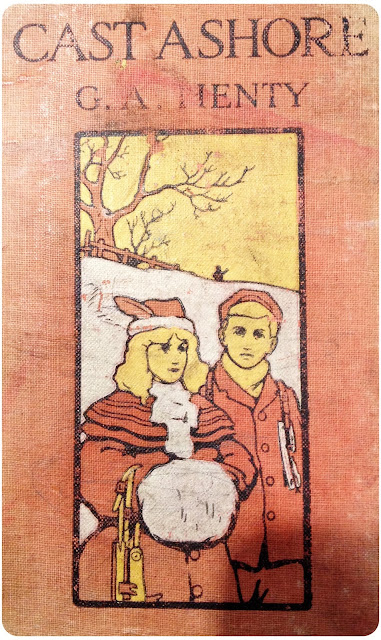 This doll has a tiny spindle and a waft of wool. 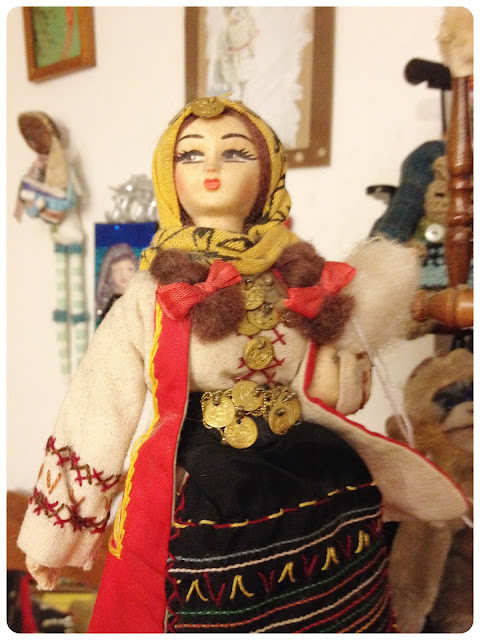 Below are two pictures made with 'Build-a-Scene' dies. I particularly like these two. I just like using white paper or card to make them as they look great against the light. I used photoshop to enhance the effect. 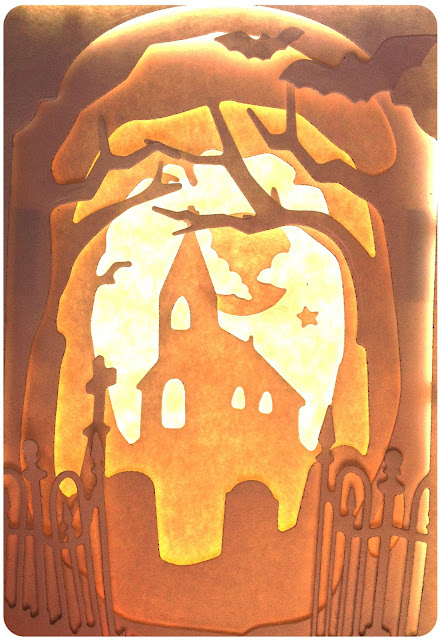 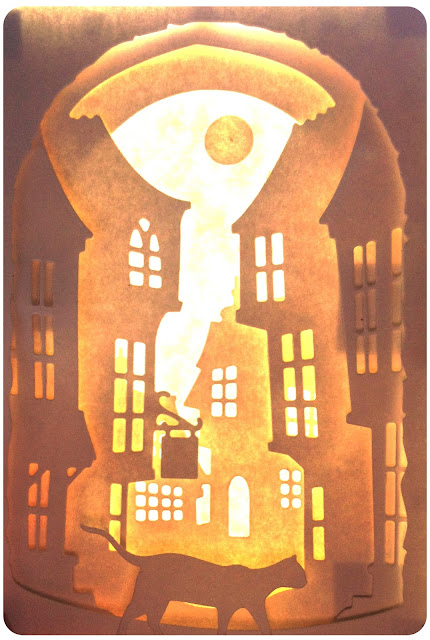 The summer holidays have been over for a week now, although I haven't actually gone back to work yet, as I am back on daily supply, and there is none yet. Anyway, I have had a lovely week, catching up with jobs that I didn't get time for in the summer, as we were away a lot and I also worked for some of it. One of the jobs was getting around to photographing the elephant I spent most of the holiday making. I was inspired, as always, by the Arty Party work, namely the papier mache elephants. The theme was around the world in eighty days, based on the adventures from the book. They ride through an Indian forest on an elephant, rescuing a princess as they do so. I found a picture I had kept from a magazine, of an amazing antique elephant. I decided to base mine on that. Up the top of the post are fancy photos, and at the end are working ones. 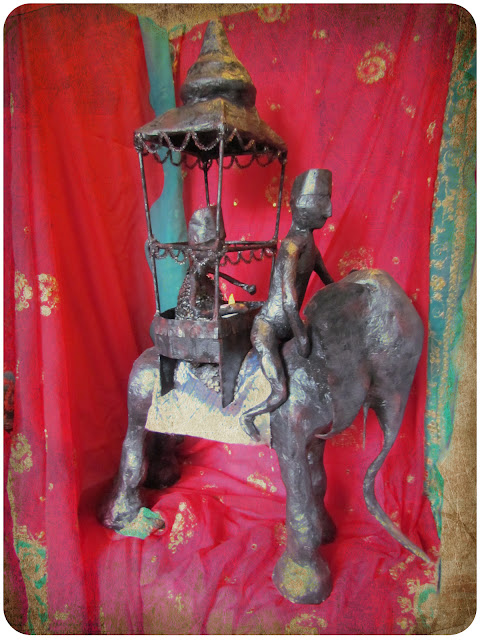 I decided against adding features, as I didn't want to paint on the metal finish. 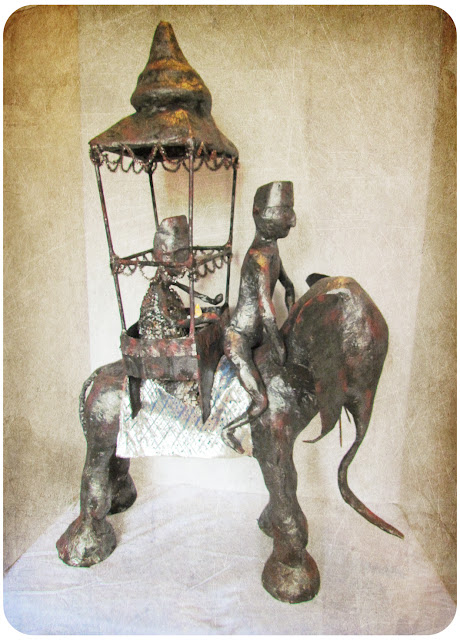 The second recent make, yesterday in fact, is this fan. On Wednesday, I visited the fan museum in Greenwich with Andy's sister. It is a small and sweet museum, in a Georgian house, and was very inspiring. We decided to each make a fan. I thought about things I had around the house, and decided that a fan was the perfect use for some pieces of metal I had. They were from a load of file folders that we got rid of at work last year. I couldn't bring myself to throw them out, so I removed the metal and cut up the card for the kids to use. I cut them in half with tin snips, made a hole with a hammer and nail, and filed the ends. I linked them with wire. I decided to use plastic for the cover. I ironed cut out pieces onto a bin bag. This fuses the pieces together. I added flakes of metal leaf, then ironed clear plastic over the top to hold them in place. (If you do this make sure you iron inside a piece of grease proof paper!) 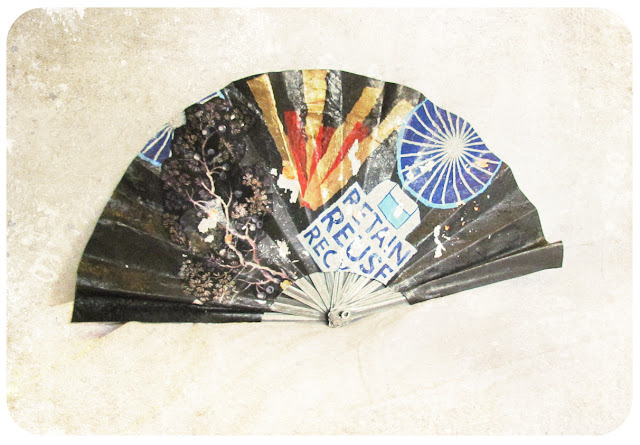 I used a compass to draw a semi-circle at the bottom, and once this was cut out, marked where the spokes would go with a gel pen. I used red liner double sided tape to fix the fan in place, then trimmed the outer edge. (Update-the red liner tape is not strong enough-keeps coming unstuck, not sure what to use instead!) I love it! It may not be the most practical fan, as it is a little heavy, but it does work. 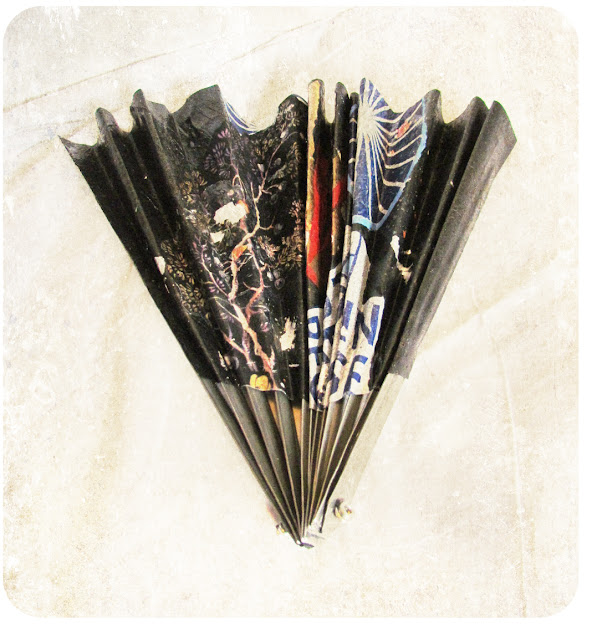 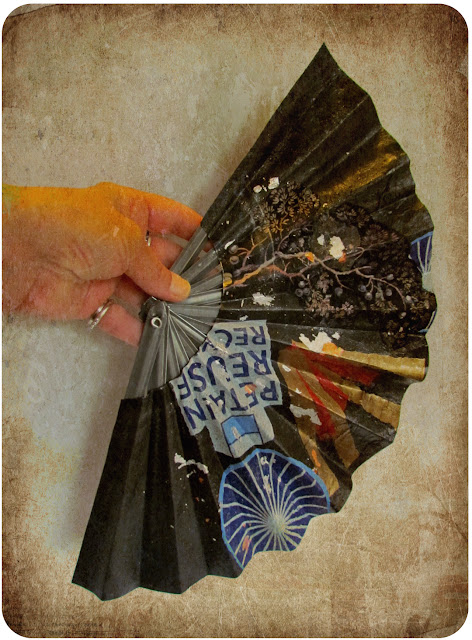 It made it worth saving all those bags I have stashed away with pretty designs on. 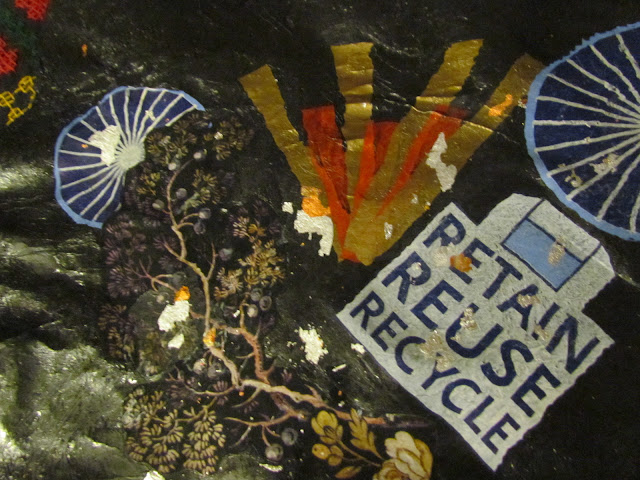 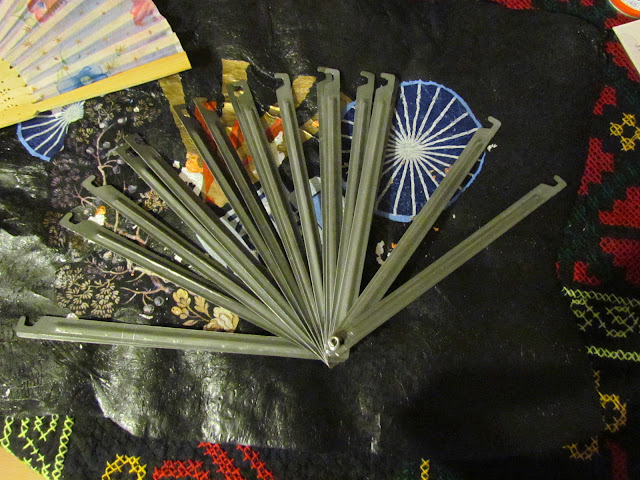 This is the base of the elephant-wooden sticks and card. 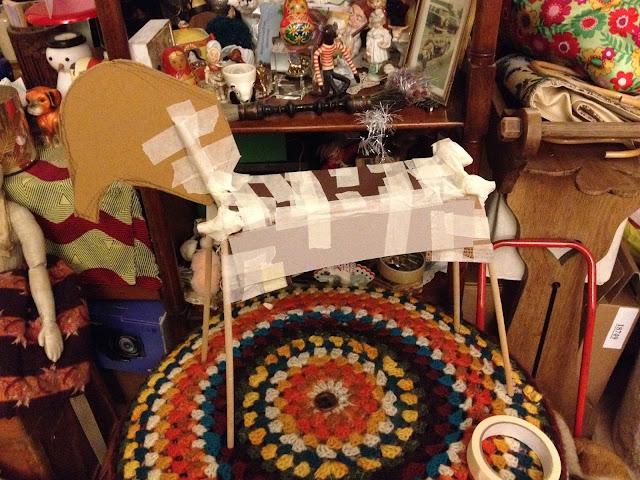 Newspaper added to begin to make the shape. 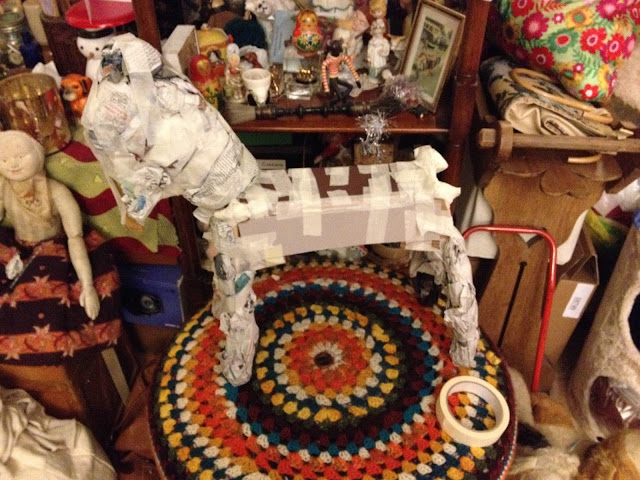 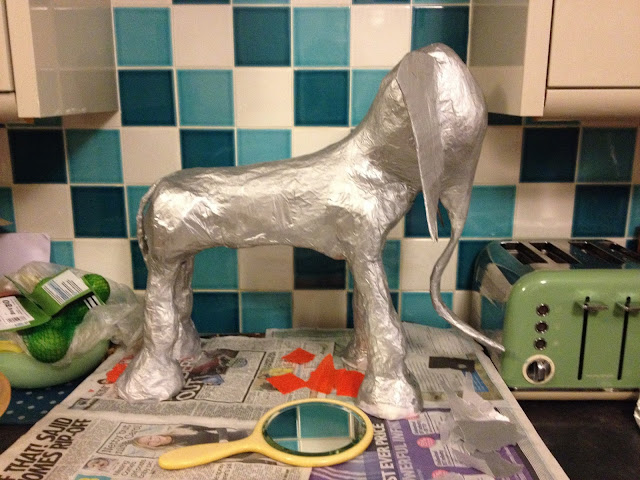 I did a layer of  newspaper, over masking tape, then white and silver tissue paper. Fred at Arty Party recommended using black paint over the silver. I used Casein paint, as it has a lovely matte finish. It smells really strange, like disinfectant, but the smell has worn off now. After the black paint, I used a dark grey metallic gilding paint, dabbed on with a sponge. For the rust, I used Casein Venetian Red paint, again put on with a sponge, but much more sparingly. I did this in my journal to remind myself, rather than as a plan. 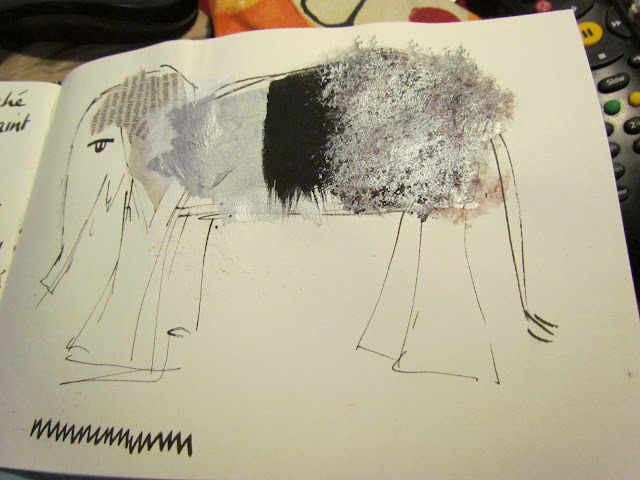 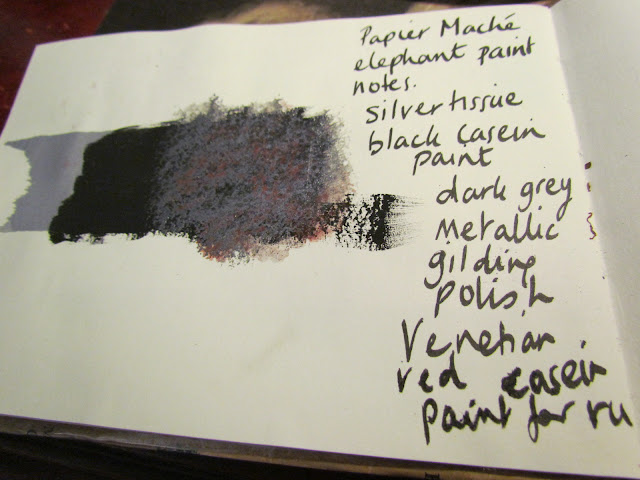 I painted a piece of silver cloth to go under the howdah.
I used nails for the tusks and wire for the tail. 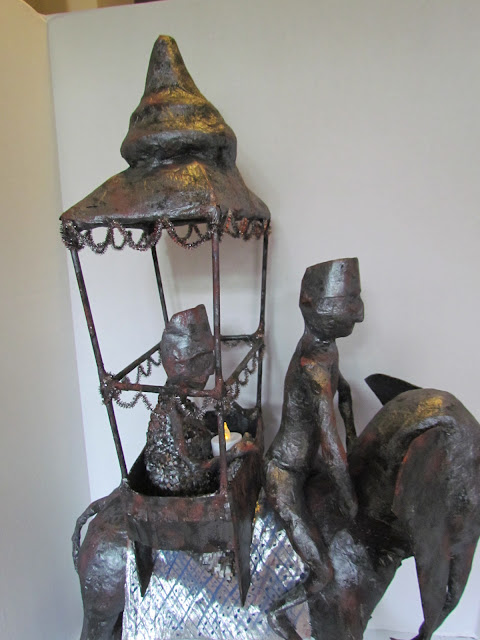 This is the picture that I was using. I made the people with wire and newspaper, and used some packaging that was cut to create a texture, for the woman's skirt. I used sticks and card for the howdah. I made a newspaper mould for the canopy, then papier mached it in two halves, joining them once I had taken them off the mould. I used silver fringing and silver pipe cleaners to trim the howdah, doing the same paint finish on them. I had such fun making it. It is a bit too large to go anywhere though so is decorating the kitchen table! 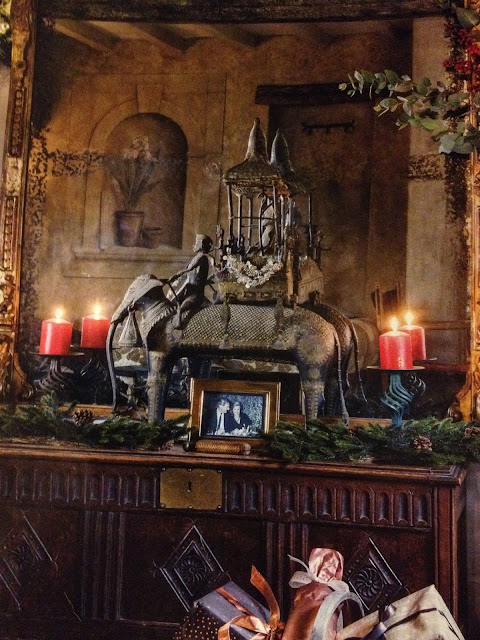 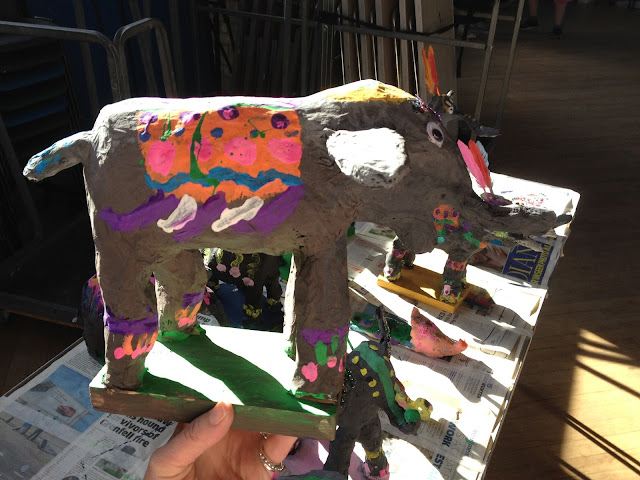 An Arty Party elephant. They were all this cute!
Posted by Sarah at 09:39 5 comments: