The view from the flat of this week's cat. It was a very misty morning yesterday and not cold. The  cat I am looking after this week is my most tricky client. He is very nervous and his nerves can turn to aggression quite quickly. I have looked after him twice so far and this is the third time, and I feel I am getting somewhere. I have worked out what he doesn't like, and what the danger signals are with him, and know how to react so as to soothe him and calm him down. He doesn't like to be touched with hands, and will strike out if I go to stroke him. He may try to get me when I touch his food and water, and also doesn't like it when I get ready to leave. He shows his stress with a certain tone of miaow, a wide eyed and small pupiled stare, and walking quickly towards me. It is usually enough now if I just stand still and talk to him in a firm but soothing voice. During this lot of visits, I have only had two incidents of him either biting or clawing so feel very pleased with our progress! He likes to sniff my hair, will put his paw on my head and will stretch up my legs all without claws. He also, I have discovered, likes to play over and around my feet if I sit on the floor, and does not use his claws on me at all. I bought a long feather toy for these visits as he loves to play and is quite frustrated by the birds he can see but can't chase! Today I took a broom and dustpan and brush to his flat to have a sweep up of his litter. He did not like those! He prowled round the outside of the room over and over again, gradually getting closer to the broom until he was close enough to sniff it. The same with the dustpan. I had to wait for him to calm down, then enticed him out of the room and shut the door while I cleaned, as I couldn't possibly have done it with him in there! Once I had finished I let him back in and, after checking that the broom and dustpan were no longer there, he played quite happily! Needless to say I love him! 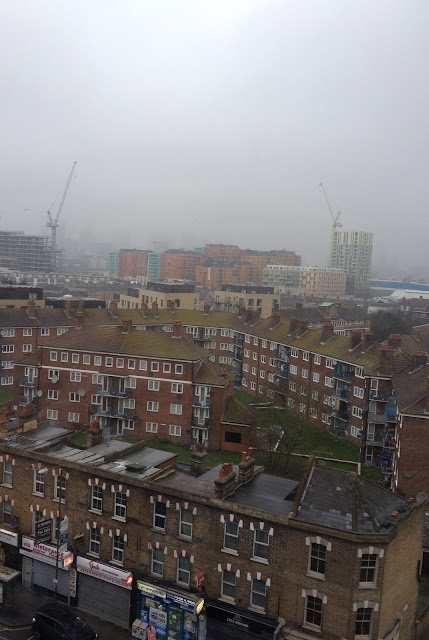 Yesterday we decided to take a quick trip to Sheppey. We went to our usual stop of Leysdown. The beach looked promising, as the tide was right out, but when we got out of the car, there was this terrible smell! It was like the normal sea smell but really stinky. So bad that you could taste it. We decided that we would not go for a walk there after all and left very quickly! We then went to Minster where it didn't smell at all, and had breakfast there instead. 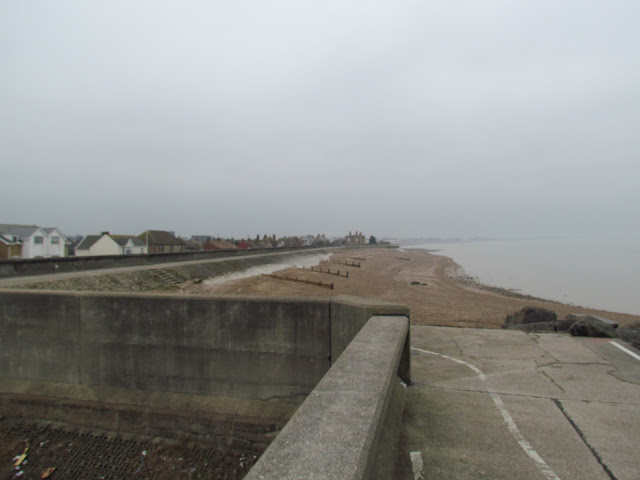 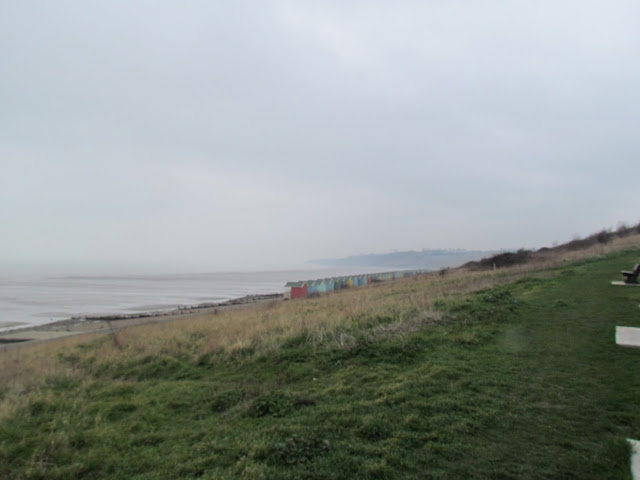 Today, as well as feeding my cat, I tidied the desk. It had got very dusty and cluttered. We had to buy a new lamp, which spurred me on to do the job. Where B&Q is, and Sainsbury's used to be, there is a new IKEA being built. It will make the traffic around here even worse. Yesterday, I had to feed the cat, then go to get Andy from Sainsbury's. The football had just kicked out, and there was something wrong with the Blackwall tunnel. This combination added up to traffic nightmare, and, despite my best attempts to use the back streets and avoid the congestion, it still took me about an hour to do a ten minute journey! 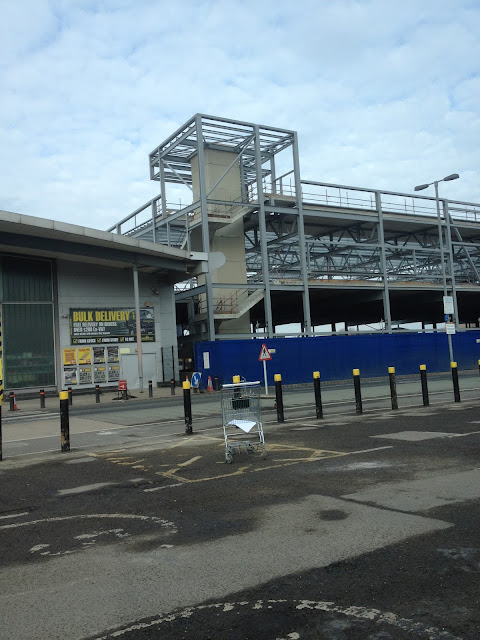 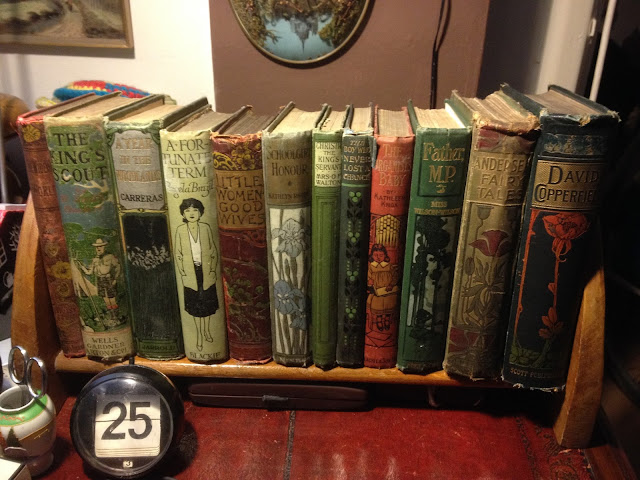 I made room on my mini bookshelf for these pretty books which I am afraid to say I buy specifically for the covers! 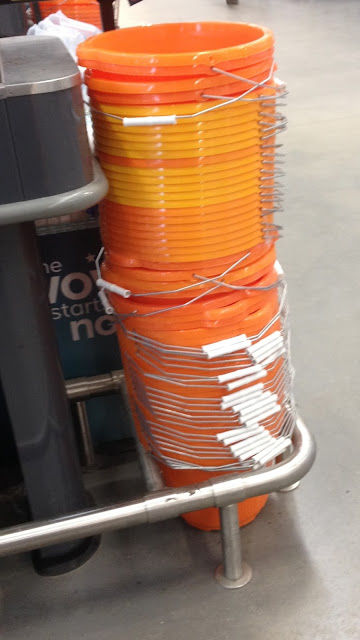 The orange buckets in B&Q are not all the same orange I noticed. This may only be interesting to me.
Posted by Sarah at 13:27 1 comment:

I love snow. Despite it causing me lots of inconvenience this week. it just makes me happy walking around in it. I had to feed cats yesterday, and thought I would leave about 3 as more snow was predicted and I wanted to drive. It started to snow about 2 so I thought I had better leave now, but it was coming down so quickly, and my car was so icy-I had trouble scraping any of it off the windscreen, so I changed my mind and got the bus. My phone died so I have no photos of the lovely walk from Greenwich to Deptford for the second cat house. When I got home, I walked to Sainsbury's for Cornish Pasties, and took loads of photos then to make up for earlier! 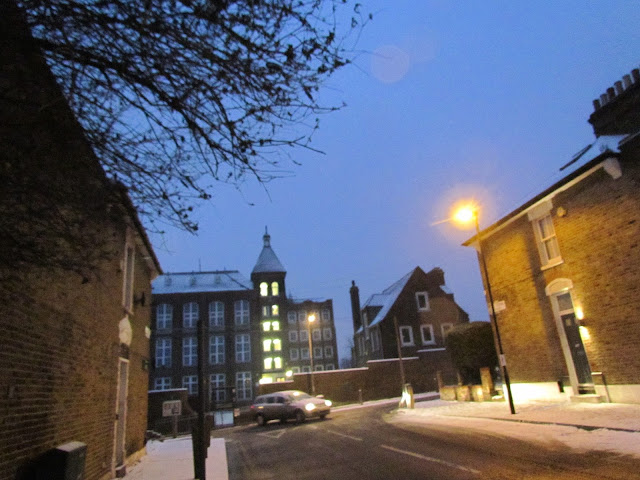 My school-which has been closed for the last two days. 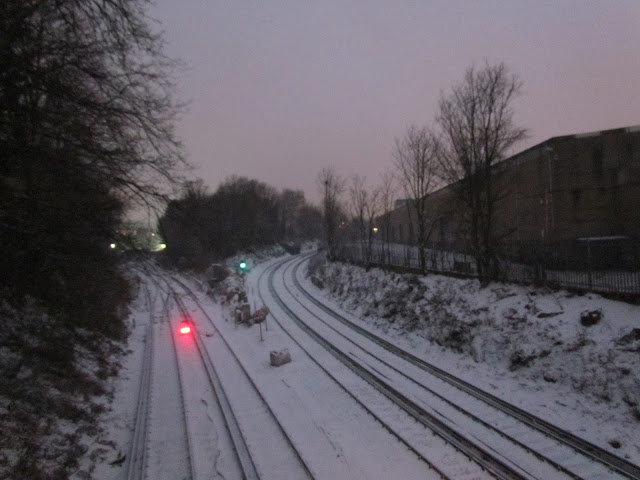 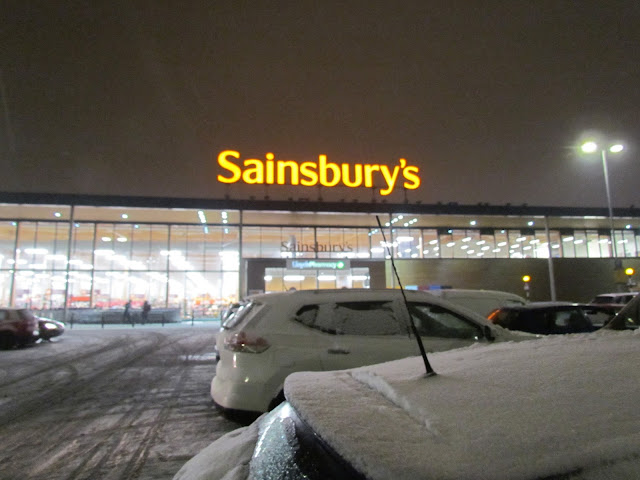 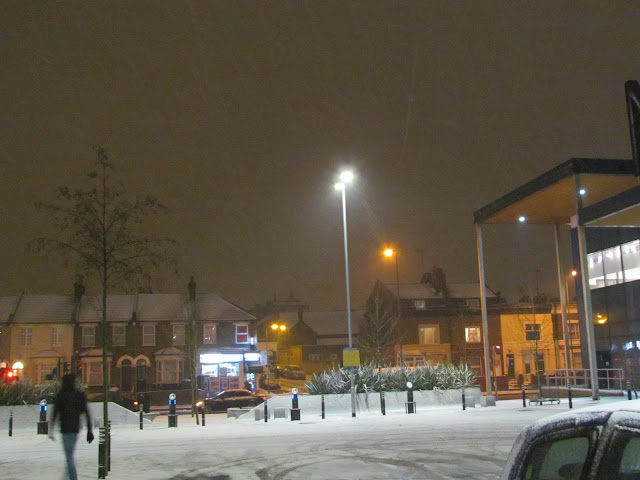 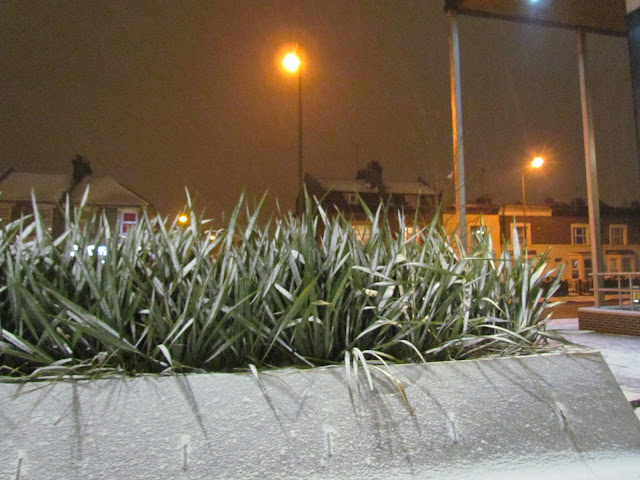 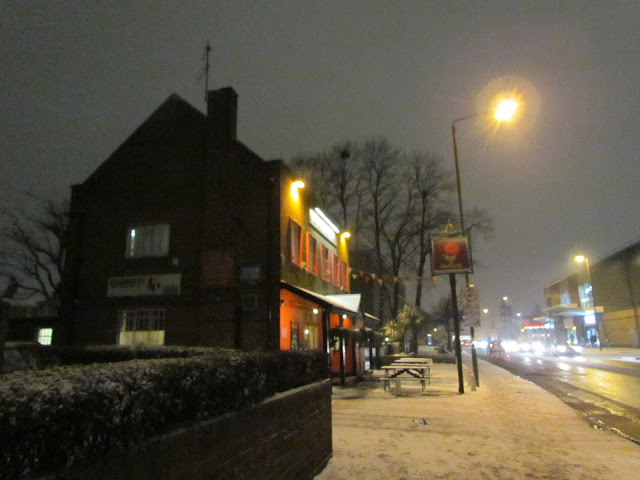 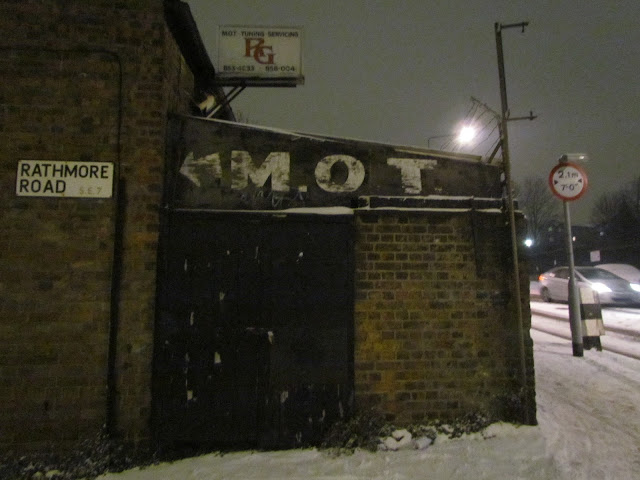 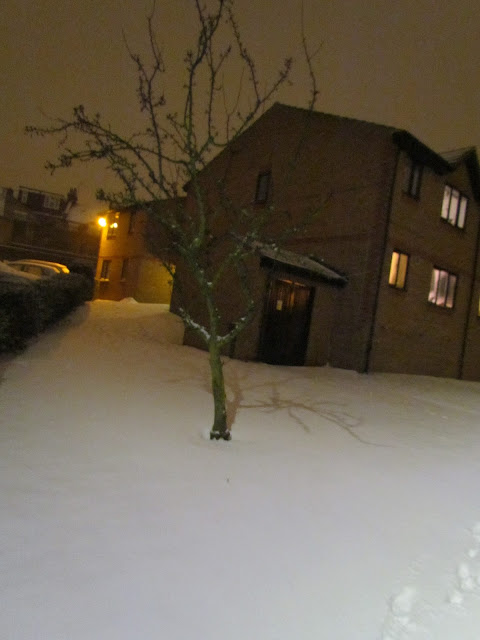 This is a road near me which I used to use as a walking or bike shortcut. You could never drive through it as it is a private road. The snow was great up here, not touched at all. 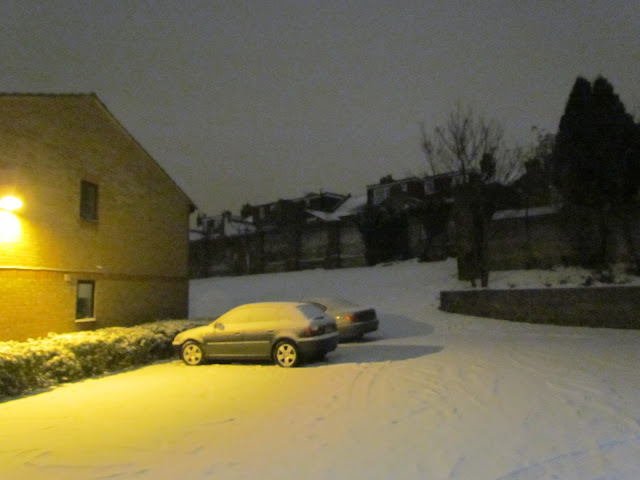 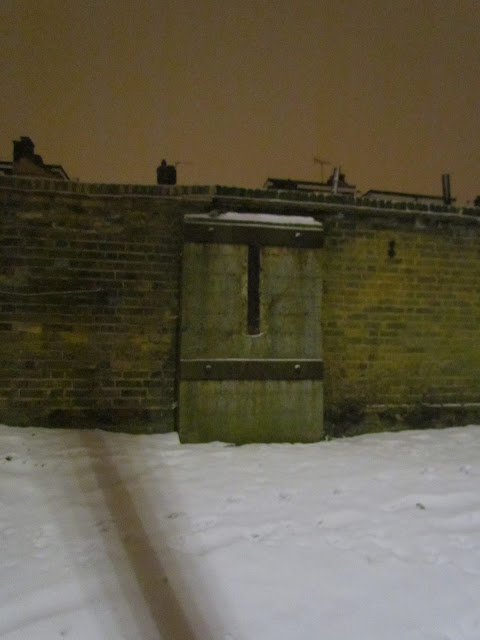 Face on the wall. 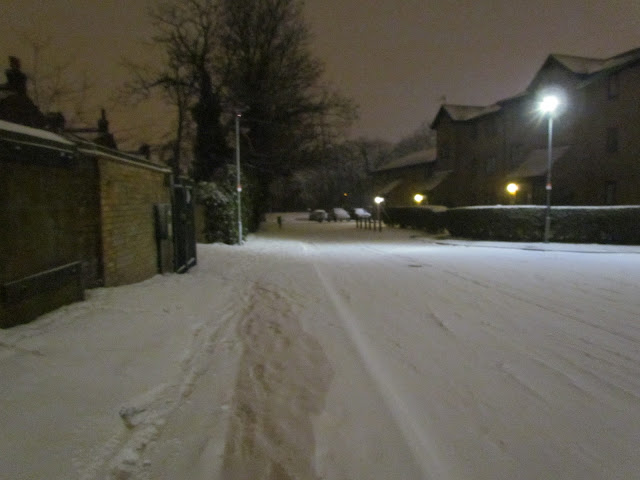 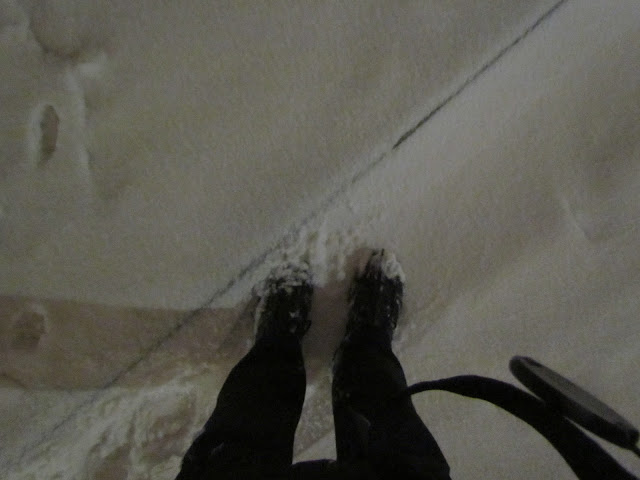 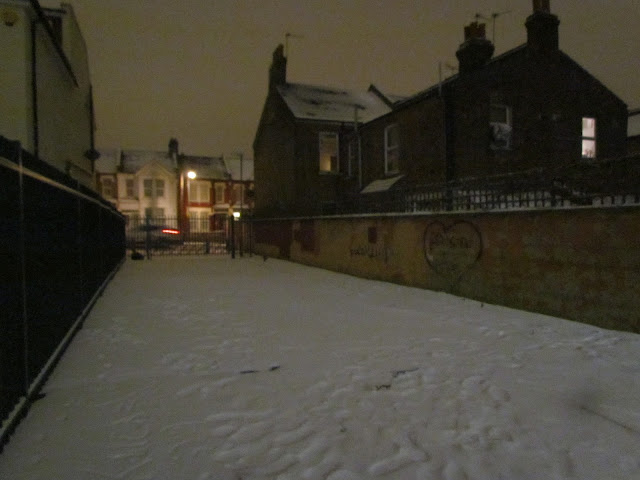 Now it is fenced off so you can't even walk through. I don't know when that happened! 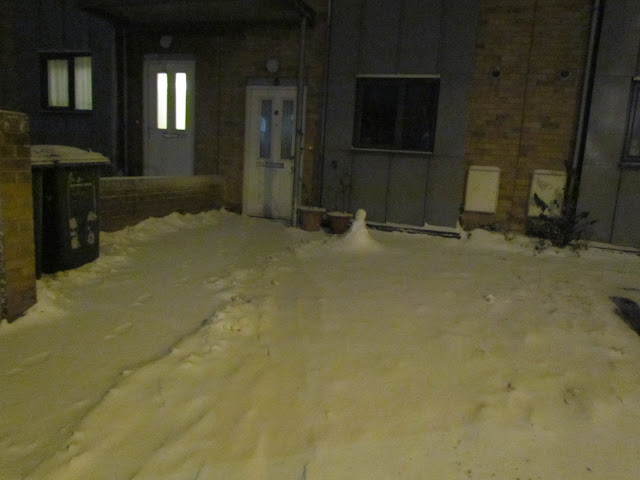 A tiny snowman. This is not good snowman snow, so they did well to even get that much together. 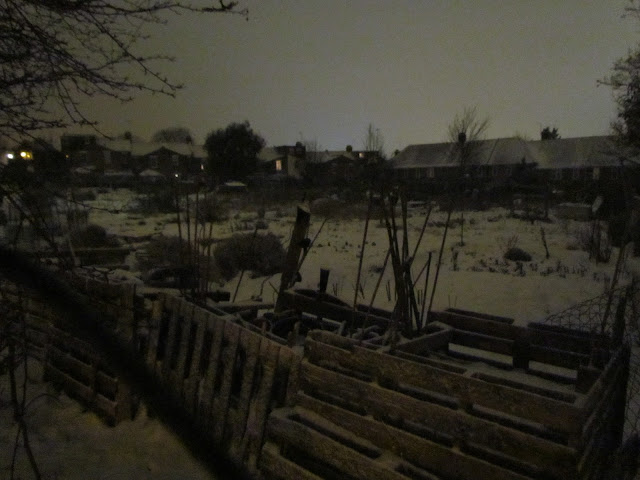 The allotments near my house. 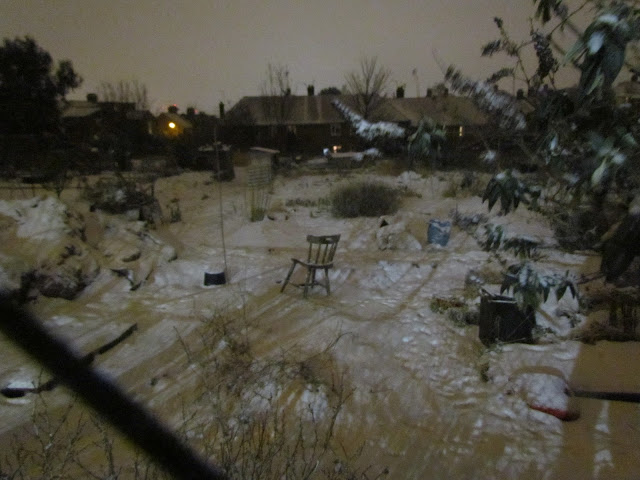