The last few weeks have whipped by! I have been spending as much time as possible with Linda Sue, as well as various family things too. It has been a great month. June has, for the first time in 25 years, not been marred by having to write reports. Below are a few pictures from  June. A theme of words seems to have developed. 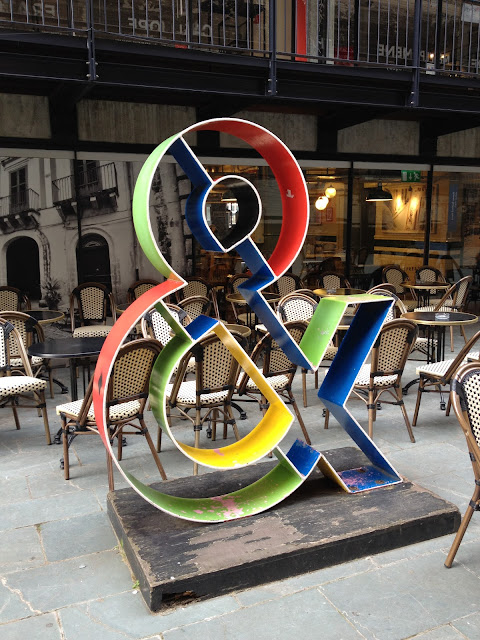 Walking back along the South bank after a family barbecue. I would like this in my garden please. 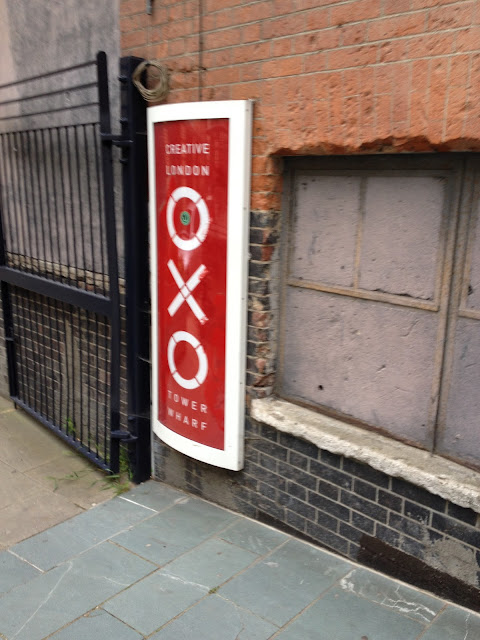 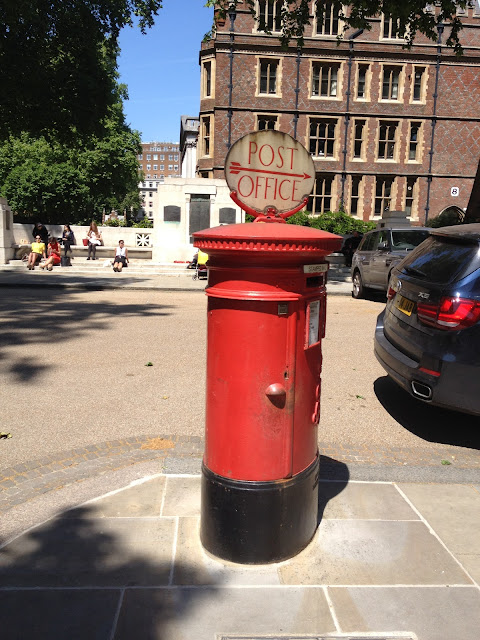 A Linda Sue day where we visited Sir John Soane's house, wandered around the Inns of Court where we found this postbox, before visiting the Hunterian museum. I recommend all of these activities, though the Hunterian is not for you if you don't like dead things in jars (beautifully preserved and presented dead things) 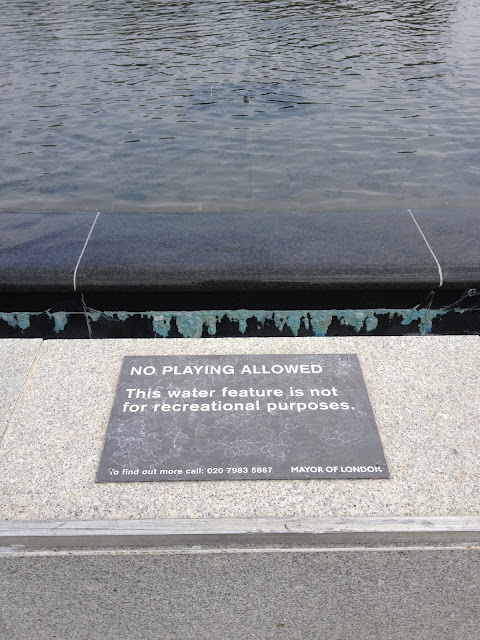 A very hot Friday or Thursday evening when I decided to walk home from North Greenwich. This miserable sign is on the pool/fountain. 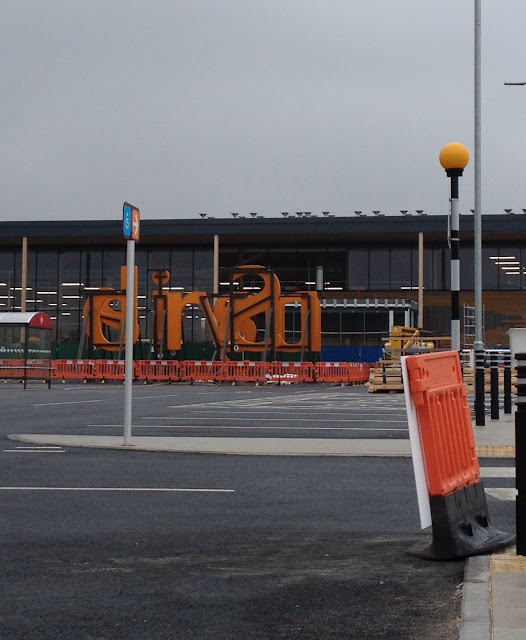 Our local Sainsbury's has moved and grown. These are the giant letters awaiting their roof placement. The store opened this week. We popped in on Saturday morning for breakfast. It is huge! 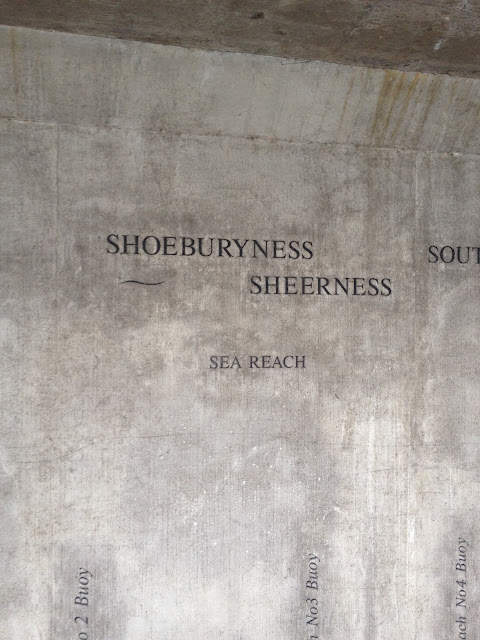 An evening tour of local spots of interest with Linda Sue. This is a carved diagram of the Thames on a wall near the Thames barrier. Sheerness is on Sheppey where my family are from and where Andy and I like to visit. 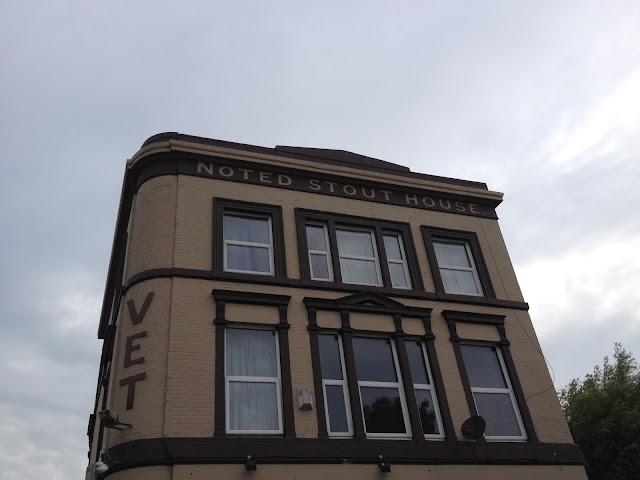 On the same walk-this pub is now a vets, and the one below a ruin-I have posted about it on here before. There is an auction sign up now. 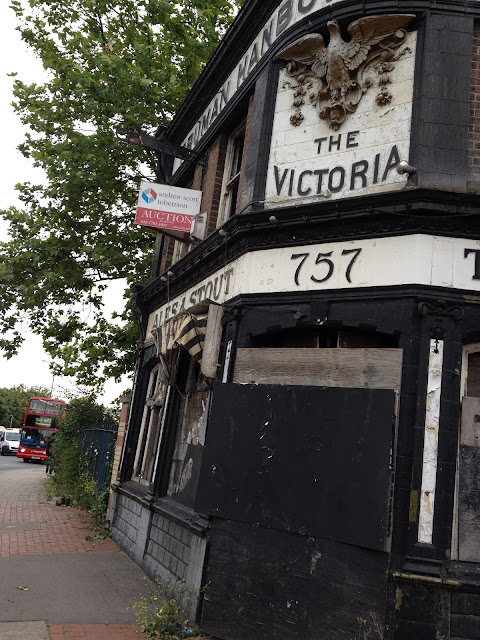 The word PUB can just be seen through the leaves. Presumably to make it visible from the road so you can pop in on your way past. 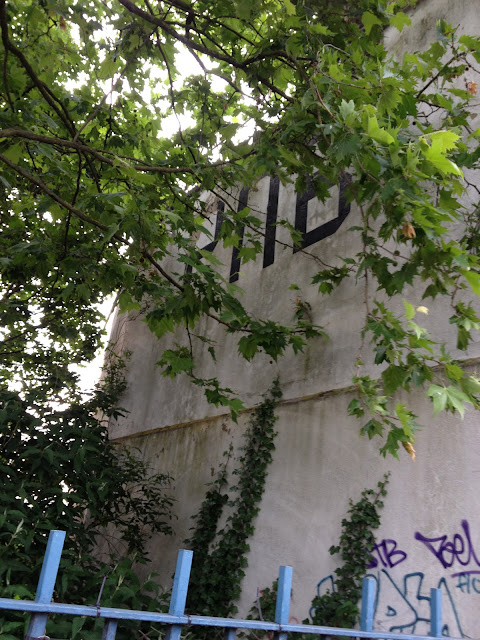 On the same evening-we walked around a secluded and well to do corner of Blackheath. We found a skip. I found a plate. It is my plate as it has my name on it. Nothing wrong with it at all. 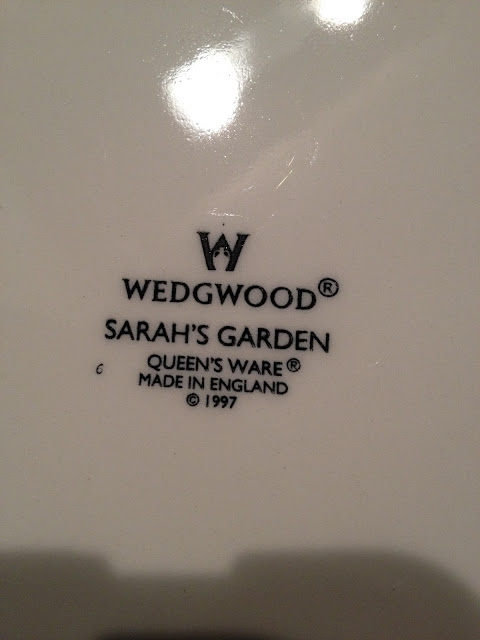 On Thursday we started the day in Greenwich market where we found this little curious clown bag and a stash of house deeds from the 1800s. They are on vellum and have the most beautiful handwriting. I am going to photograph mine to make photo backgrounds/layers for photoshop. 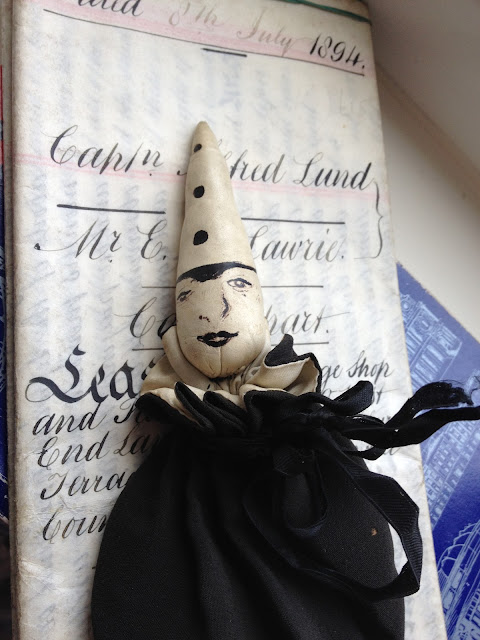 Later that day we went to Rochester, and visited the museum which I have never been in. The Hulks were the prison ships used to house prisoners of war. 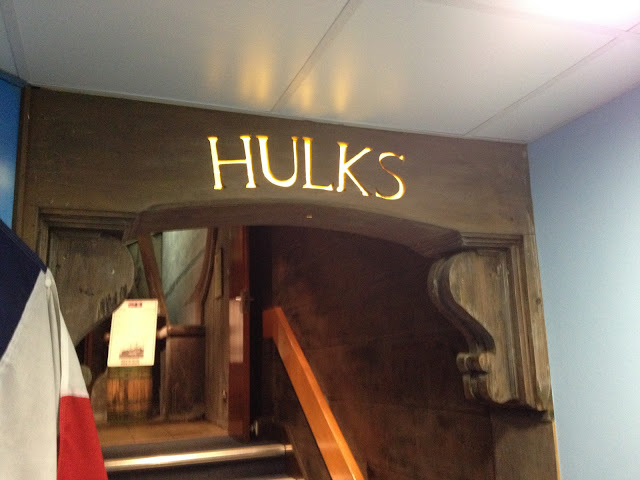 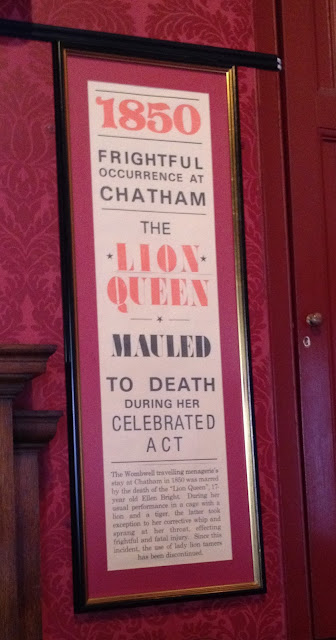 Lastly is this poster. A lion and tiger tamer lady was killed by her animals, thus putting an end to her act. What a life.
Posted by Sarah at 15:17 3 comments:

A Lovely Day Out

Great news-Linda Sue has arrived in London! She got here on Thursday so I thought Saturday was quite long enough to have to wait to see her. My friend Devi and I had already planned a trip to Portobello market for Saturday, so we all met up and that is where we spent the day. We met in Earl's Court near where Linda Sue is staying and walked to the market. There is so much to see there that we spent the whole day meandering down, stopping for lunch, snacks and dinner. We had a lovely day! 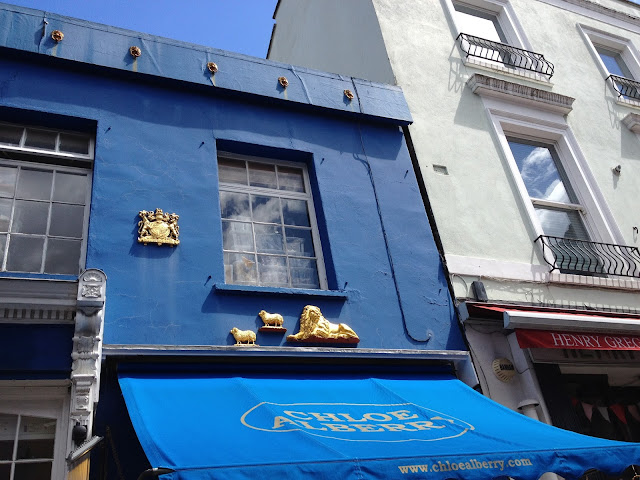 Love the gold on blue. 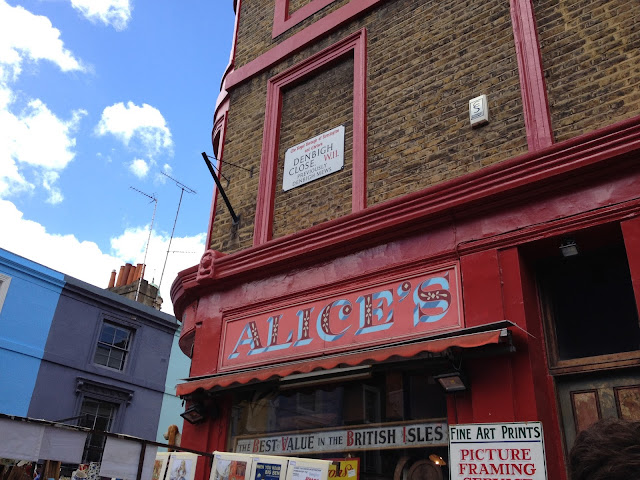 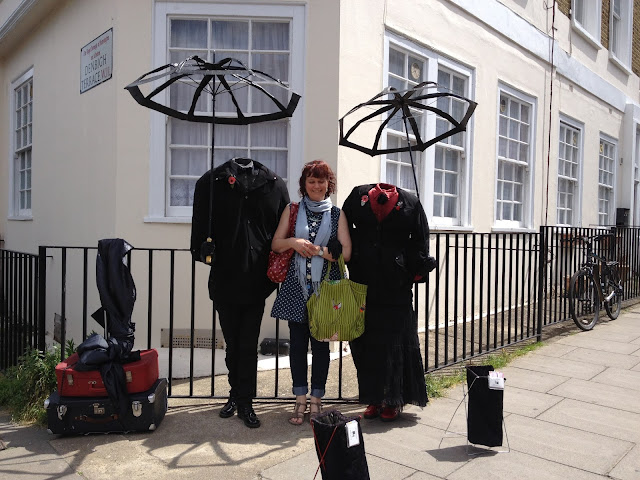 I met a couple of headless people. They patted my arm but didn't speak. 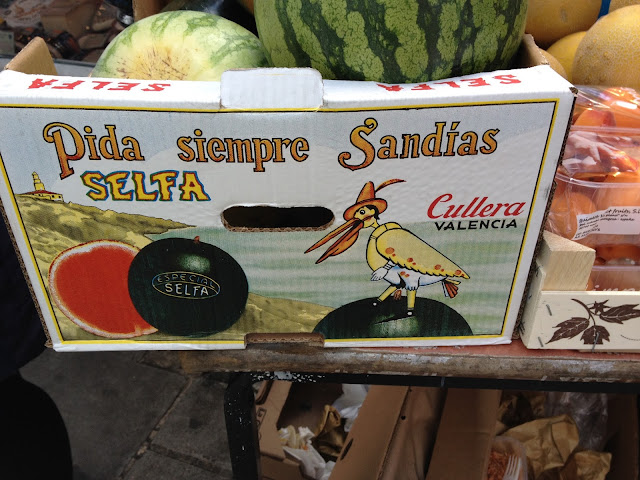 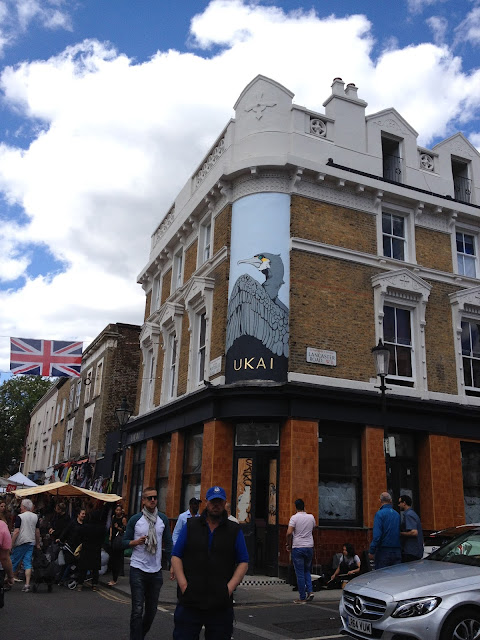 Shag/cormorant (not sure which), on this building. 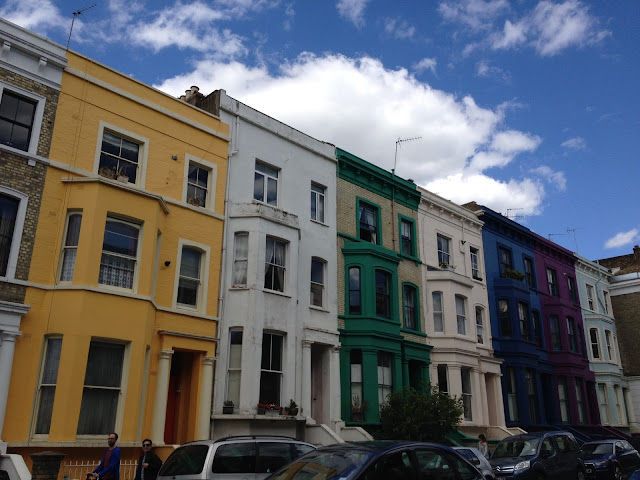 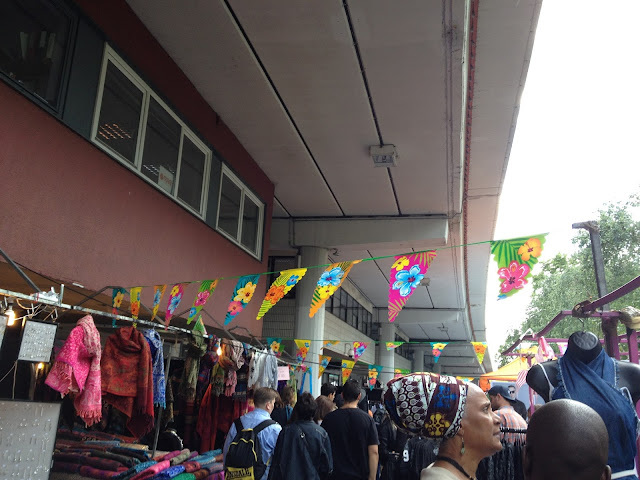 Bright bunting. It was near here that a man with a jewellery stall showed great interest in my necklace. He asked where I got it (the boot fair-where else?!-£5) He was impressed and told me it was worth £60-70. I am not planning to sell it though! 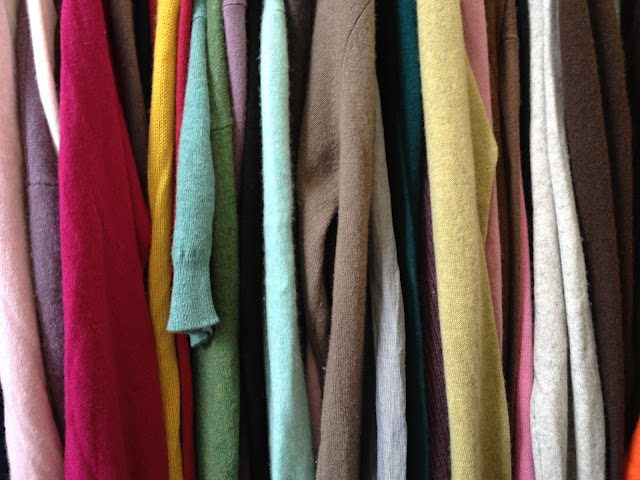 Cashmere jumpers-the green one is now mine-£8! 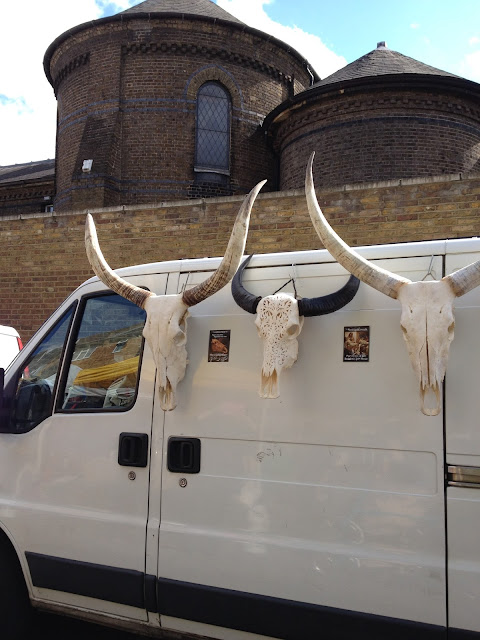 Skulls on a van. This is nearing the end of the market-right down the bottom. I had been pretty good all day-in terms of not buying too much, when all of a sudden there were lots of interesting bargains to be had! This part of the market was much quieter too. 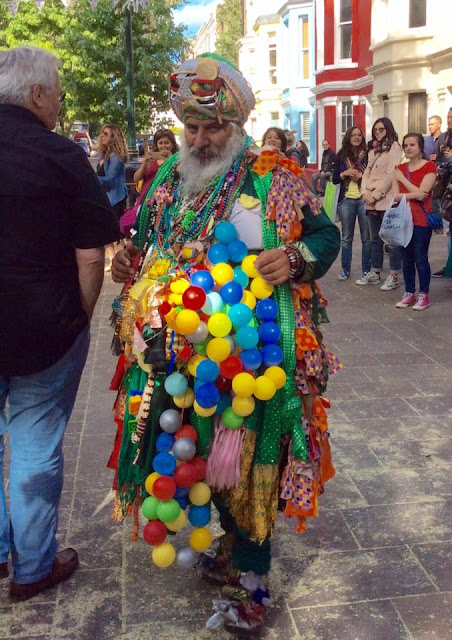 After walking all the way down, we walked all the way back up again. Earlier we had seen a big meal going on outside a restaurant-some kind of celebration. When we got back to that part there was a party with dancing in the street. This man, with his amazing costume, was attracting a lot of attention, but there were also a lot of other colourfully dressed and eccentric people there. A band was playing. They called over a singer to do one song-'Wicked Game' by Chris Isaak. We thought it might actually be him, but I am not sure. Whoever it was though he, and the band, were very good. Credit to Linda Sue for the photo. 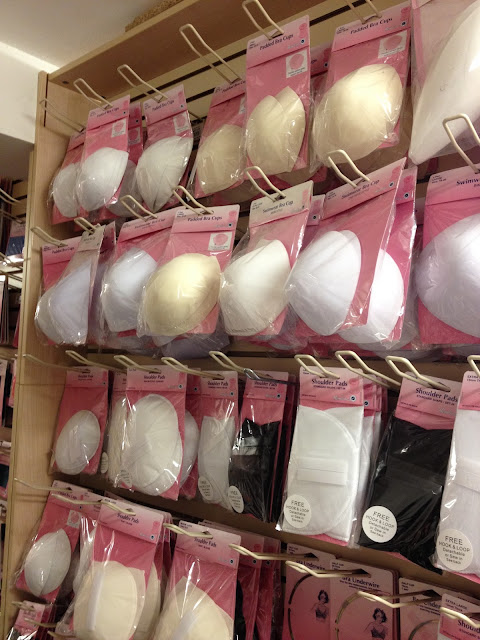 I spotted a haberdashery shop on the way back up. I bought some amazing aluminium rainbow trim. When we looked downstairs I was surprised to find a whole section dedicated to bra making! Everything you could possibly need. 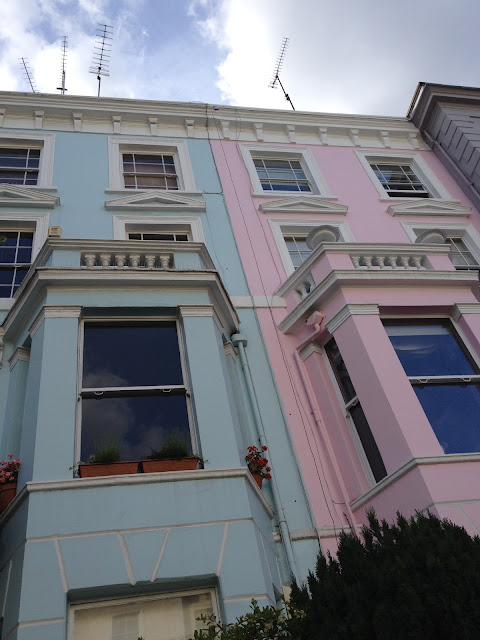 Pastel coloured houses. Like sugared almonds, a favourite sweet of mine. 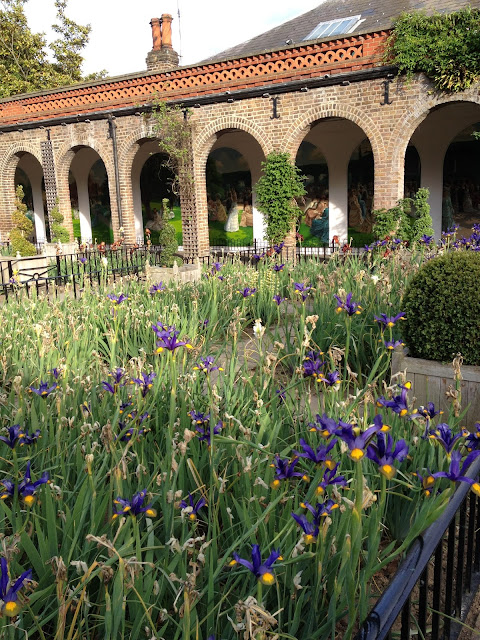 Holland Park. I have never been there before. It is really lovely. 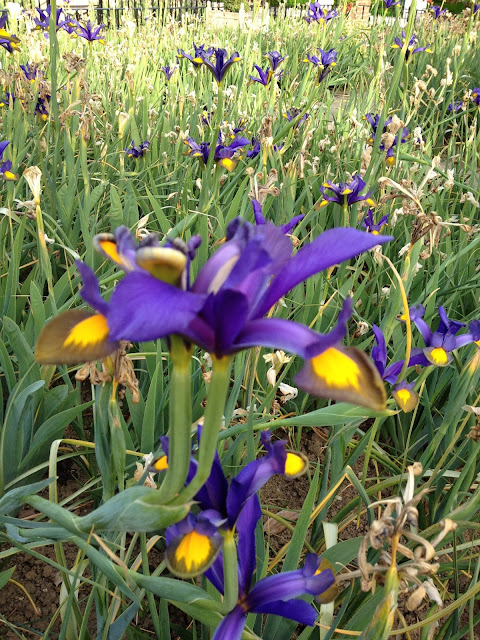 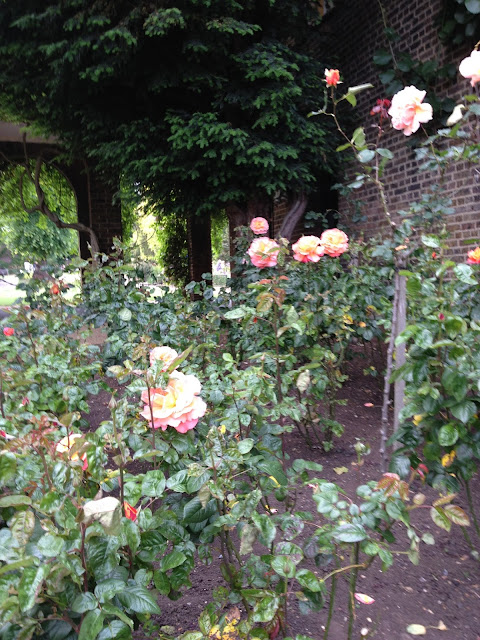 A distant view of Linda Sue and Devi. 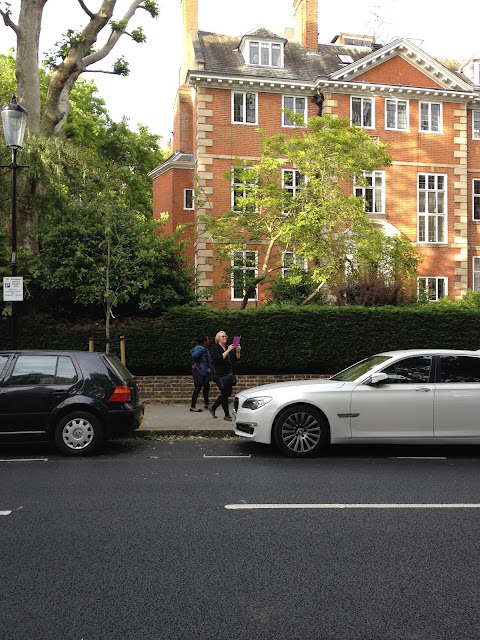 Bird street art back at Earl's Court. We managed to find a quiet pub off of the main road, which turned into a noisy pub very soon. We went a little way down the street and found a downstairs winebar to have a meal. It didn't look promising but we were there so we stayed. We had hummous and pitta as a starter, and beef bourgignon with rice for the main course. Both delicious and very cheap. It was run by quite an eccentric fairly old lady who was very friendly. Not sure if she was French or Italian but she was exotic in her way. In between courses she took herself outside for wine. I loved it in there! 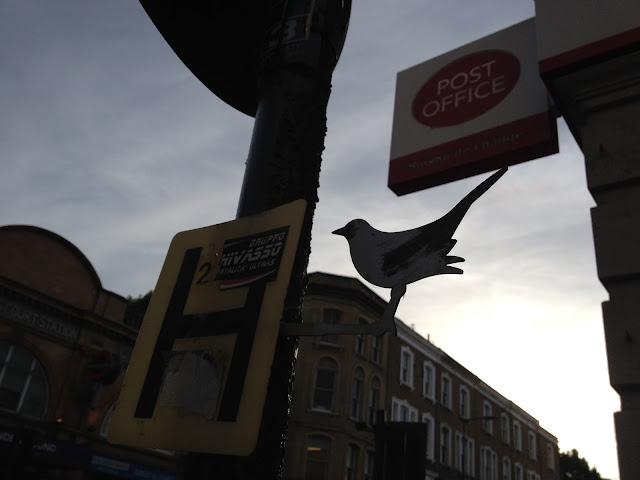 I am meeting Linda Sue on Thursday as I have no work on that day. Excited!
Posted by Sarah at 13:35 4 comments: