Sunflowers in the Park

This morning I met Kim from work and we went for coffee in her local park. I have been there before with our friends Devi and Jeremy, or else I would never have known it was there. It is called East Greenwich Pleasaunce and is indeed very pleasant. It has a sweet little cafe and lots of friendly dog walkers. It is hidden away in the middle of the streets with quite concealed entrances. It somethimes has a fair on the last Sunday of the month which is why we decided to meet up. That wasn't on today but coffee in the park was just as good! These two cheery sunflowers stood out and there are lots of huge and beautiful trees. It has a graveyard of naval and merchant sailors which is why we went with our friends before. 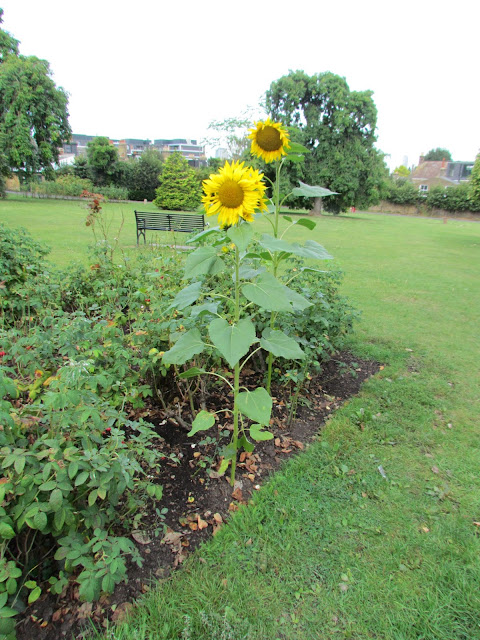 After coffee, Kim invited me round for more coffee and to meet her dog. He is, as you can see, a very handsome boy. He is called Bruiser and is very friendly and sweet. He has the most amazing chestnut coloured coat with lots of shades in it. I wanted to take photos of him so Kim bribed him with treats! 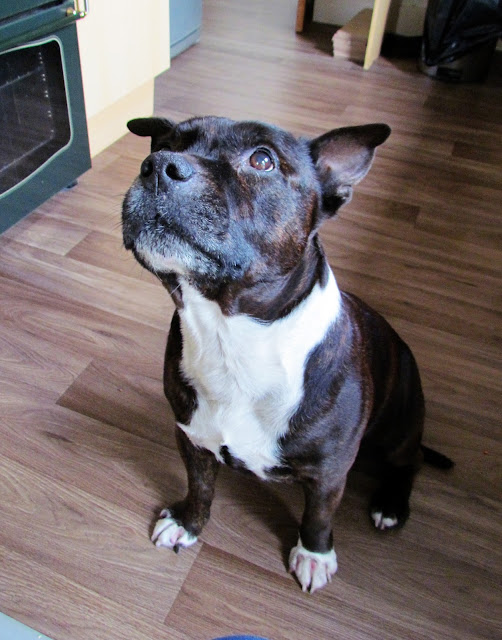 He is wearing his sock here as he chews his paw and is making it sore. He soon whipped the sock off though! 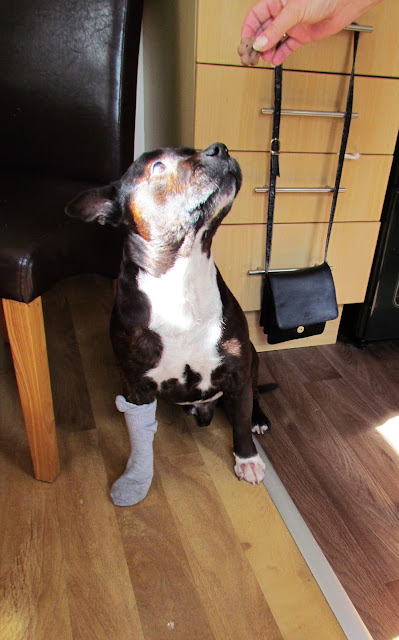 This is a drawing by Kim's grandson. He was in the nursery when I first started at my current school. He was always very good at drawing, really concentrating and looking closely and I loved his pictures. This one is amazing. There is real depth and composition in it and lots of detail. 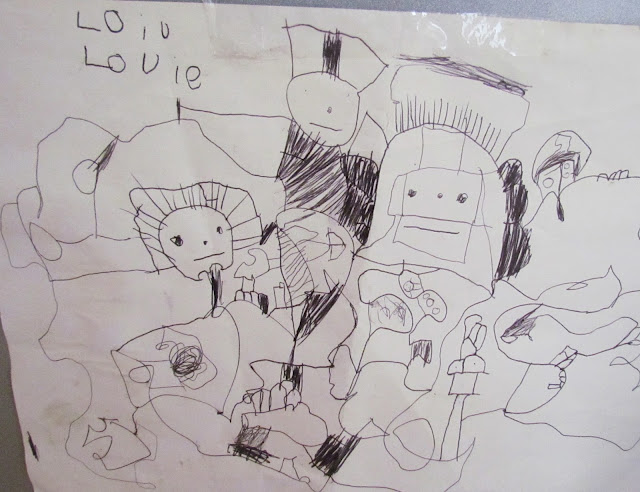 I went to buy ink this afternoon so have now printed out the pictures for Tiger's shelf. I had these three tiny frames as a present from a friend a couple of years ago and they are perfect. 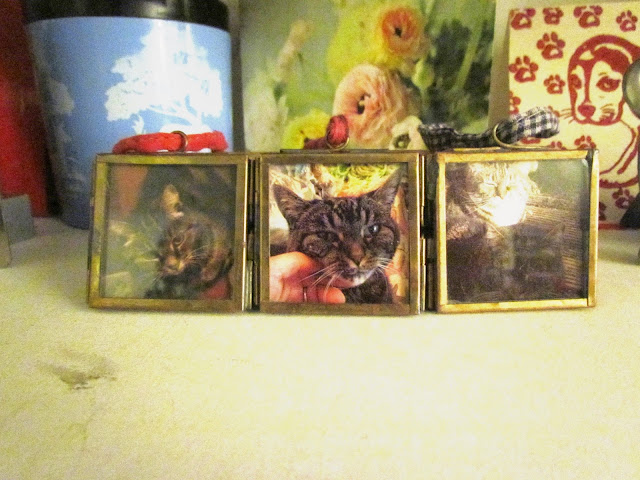 Today I cleared the shelves behind the television with the intention of making a shelf for Tiger. I have her ashes in a beautiful little wooden casket and we wanted a special place to keep them. It might sound a small job clearing the shelves, but it took the whole day! I took three bags of DVDs, books and assorted nick knacks to the charity shop, unplugged the TV etc, moved the heavy naval trunk behind the TV, sorted the remaining books, DVDs and nick knacks and then put it all back. It now looks lovely over there and puts other areas to shame. Oh-I forgot to mention the dust, lots and lots of dust. All gone now. I now have far less stuff on there so hopefully it will be easier to clean. 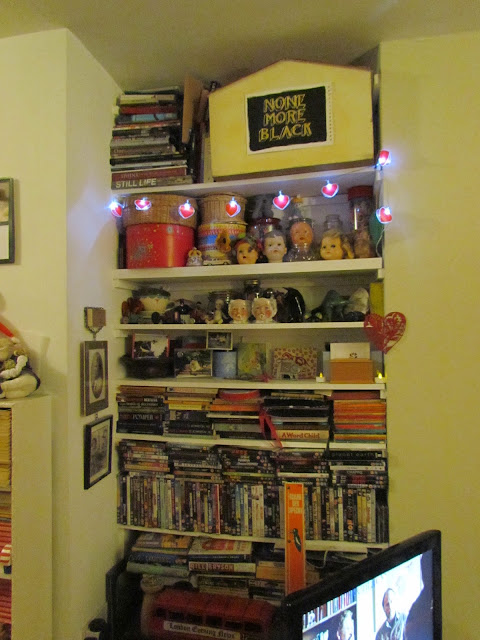 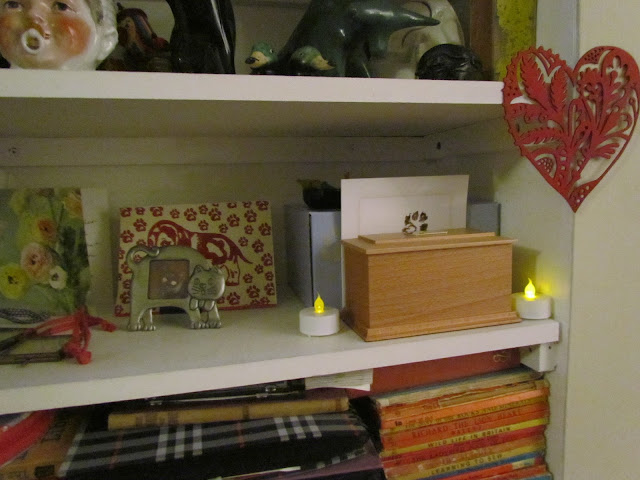 My other cats Connie and Boris are on there too. The only thing I couldn't do tonight was print photos of Tiger as I have run out of ink. I will put Lily and Cassie up there too to keep her company. There is a little bowl of catnip, a treat and a toy mouse. 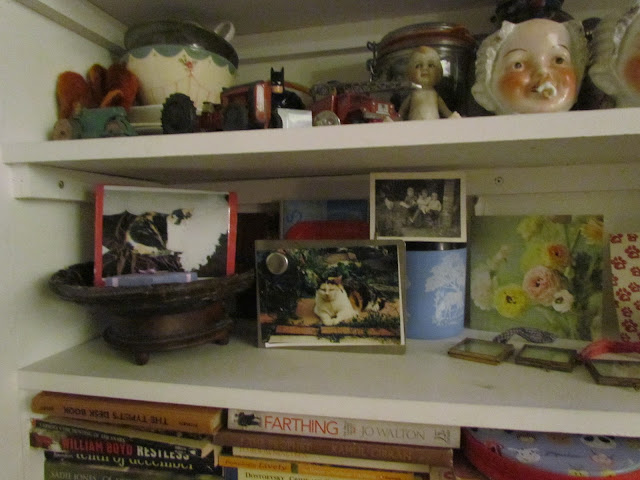 At the back are a couple of photo albums with cats now departed. The black and white photo is Andy's brother and sisters and their cat Pandy. Tiger's cards are there too. One from Chinmoyee, one from Linda Sue and one from the vets. 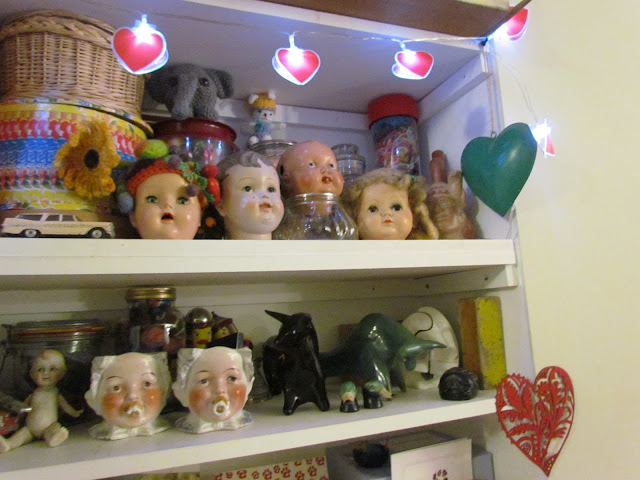 Above are lots of heads, a couple of bulls, a baby and a pair of ducks. There are also some toy cars that were hidden away in a basket. 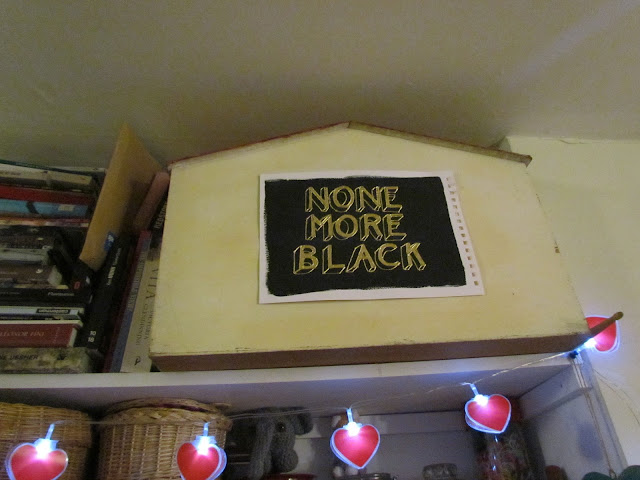 I didn't get the time to sort the contents of this dolls house, so have turned it around so it looks neat. This also means I can stick my gold leaf 'Spinal Tap' quote up there. 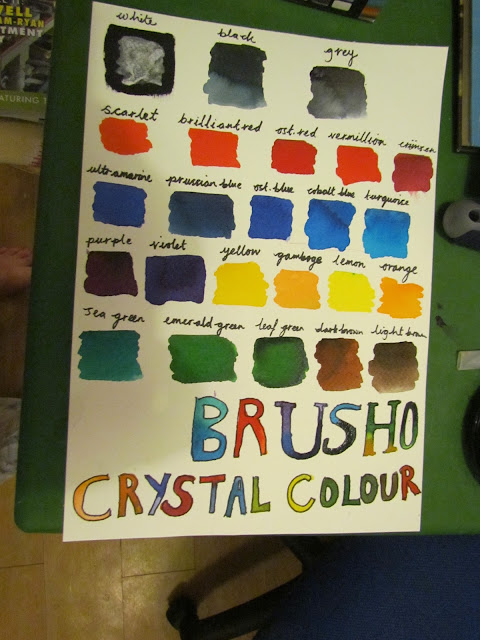 When I had finished, I spent a relaxing hour playing with my new Brusho set. I love Brusho, as the colours are so intense and you can get lots of different effects. It is like magic paint. 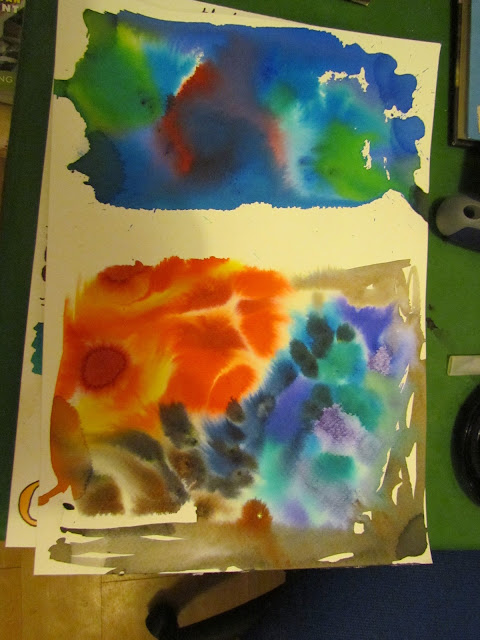 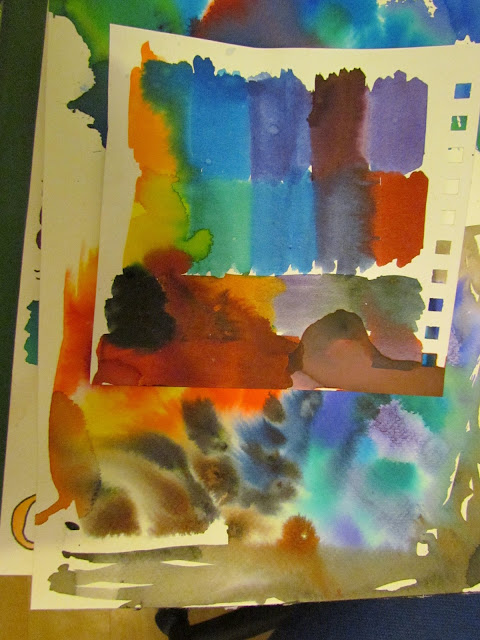 I found this image of a London bus being held up by tea cups. It is from a book on pottery and is proving how strong the cups are. I love it! 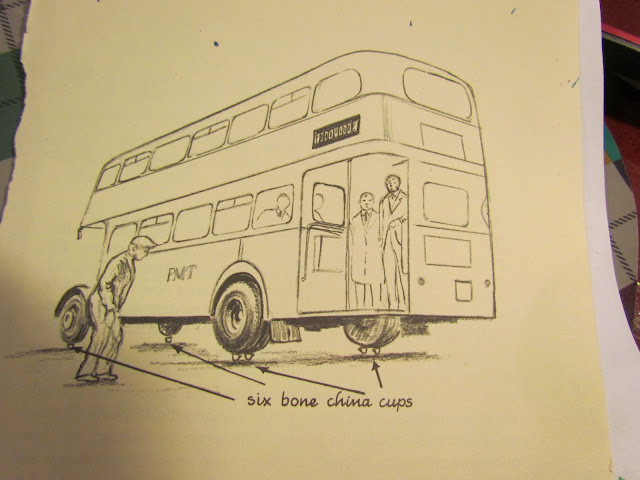 My other two little cat friends are finding out how to be two instead of three. When we came back from the vets without Tiger, and, each time we came home for about a week, Lily especially would look at the door as if she wanted to know where she was. Tiger was a friend to both in that she would sleep next to them and they both knew that Tiger was top cat so relationships were easy. Now that she is not here, they are having to find new ways to do things. I shouldn't put human emotions onto them, but, when Tiger was here and was ill, both seemed almost to know, and to be treating her accordingly. Cassie would sniff her carefully and not try to play, and Lily kind of retreated into the background, as I was spending so much time with Tiger. Now they seem to be working out how to get along in a Tigerless world. They seem to be doing ok, and I haven't noticed Cassie chasing Lily as much as she did. Lily is a tense little cat anyway, and the first week and a half after Tiger died, she was on the edge of madness. She had one night where I was convinced that it was the end. She couldn't settle, wasn't reacting normally to anything and wouldn't eat or purr. But, since then, she has calmed down again, and the last few days has seemed extremely relaxed. I am very grateful that they are both still here, so thought I would pay them tribute! 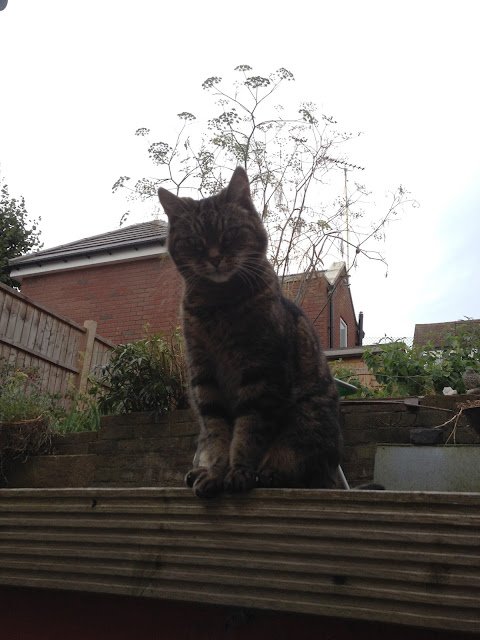 Lily on the decking. She has tiny paws, and well marked stripes on her legs and is, in general, a very pretty little cat. 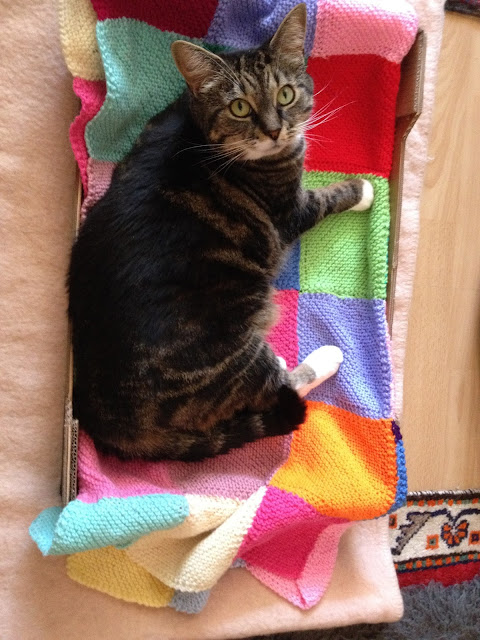 Cassie in a box. Boxes are free and Cassie loves them. She looks particularly cute on this colourful blanket. She currently has two boxes, one for playing and one for sleeping. Her current favourite toy is a tiny cat nip nodule I made from fabric, attached to a piece of string. She is a cheap date!

Two weeks and one day ago, we had to say goodbye to Tiger. I miss her every day and still cannot believe that she is gone. I have spent a lot of time writing down all the things about her that made her her, and that has helped a little. I have hundreds of photos of her and Lily and Cassie, which is also a big comfort. She was a beautiful soul, who loved us every day, so thank you Tiger. I love you and will never forget you.
Below are a few photos, and you can see how much she liked the company of her sister and Cassie too. She loved to lounge, and another warm body never did any harm. 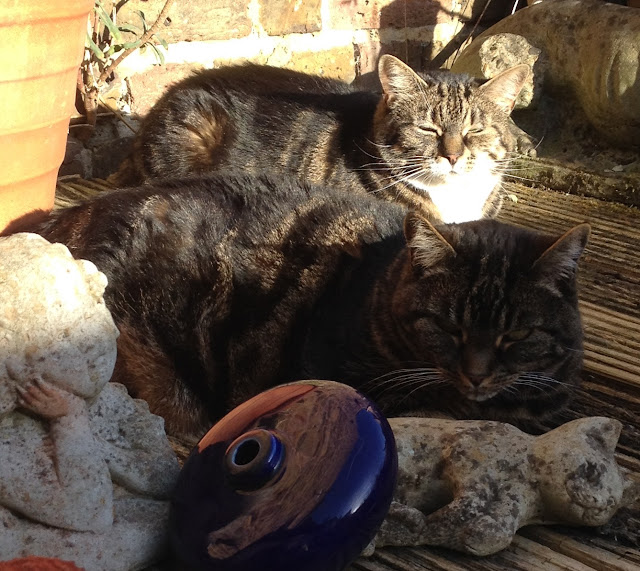 Tiger and Lily came to us about fourteen years ago, just after our cat Boris, who we had for fourteen years, had died. We had planned to get another cat, but were too sad about Boris to think about it for a while. One morning I was walking to school. I came around the corner to find five year six children lying or crouching on the ground next to the derelict old people's home next door. They had been feeding two cats for about a week. They had tried to find out who they belonged to but with no luck. A few days later, two of the teachers, Miss A. and Mr B. climbed over the fence, managed to get the cats, and brought them into the staff room. Lily hid under a chair, while Tiger walked around, making friends with everyone and eating tuna. Mrs H. arranged for them to go to a vets. Nobody in the school wanted two stray cats, and of course, I did. So, after their check up, the two teachers who had rescued them, collected them, and brought them to our flat. Lily continued to hide for another week, and Tiger settled right in. They came to us just when we needed them, and we couldn't have chosen two sweeter cats. 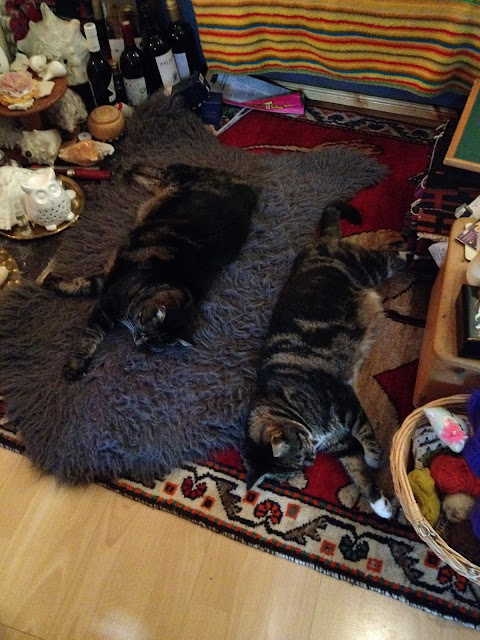 Cassie joined us a few years ago, not a stray, but an unwanted kitten. At first Tiger was appalled. She was a jealous girl. I sometimes called her Tigey Toos as, whatever anyone else had, she wanted. She would rush over to be first for cuddles, treats or food. Anyway, Cassie was accepted so then we had three. 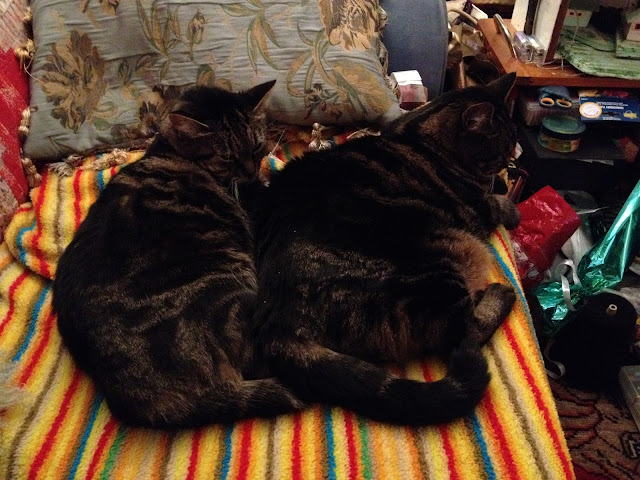 Tiger loved fish and chips fish, bed time and bath time cuddles, (in fact any time cuddles) waking me up by licking my ear, and she was scared of the blower in the bathroom-always eyeing it suspiciously. When we first had her, she would retrieve her favourite green mouse from the bottom of the stairs. She got lots of praise and fuss for doing that, and, after a while, she would leave the mouse, and just come back for the cuddles! Lily is a more timid cat when it comes to humans, but she was always at the forefront of any garden defending that needed to be done, with Tiger bringing up the rear. 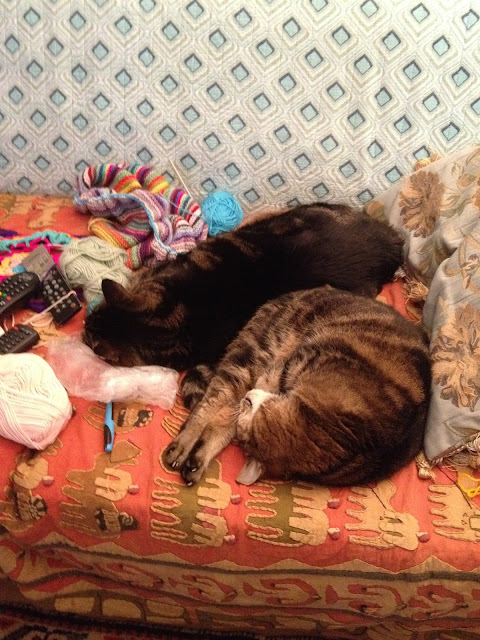 After we moved to this flat, she would sometimes cry at night like she was lost. We would hear her padding around and into the bedroom, and she would then drop a green mouse (her favourite ones were all green) onto the floor and go to bed. 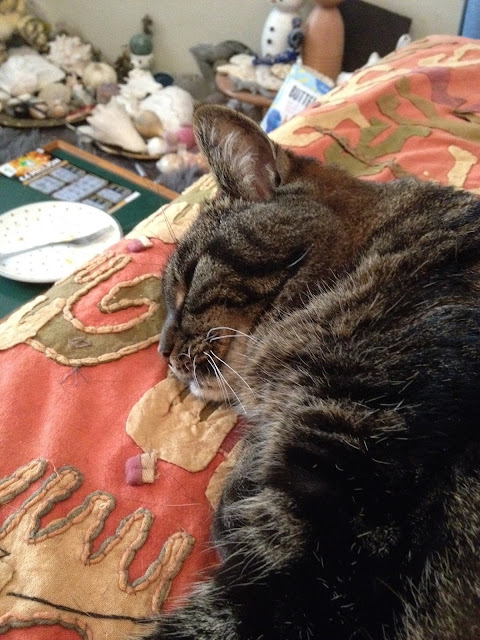 When I was stroking her on the bed, she would grab my hand if I went to leave, so that I would stroke her some more. She was always a very good girl at the vets, though she was impossible to get a pill down. Once, a while ago, we were waiting for the vet to get something, so he left us in the surgery. She suddenly moved fast, whipped her paw under the weighing machine and gobbled up a forgotten treat. 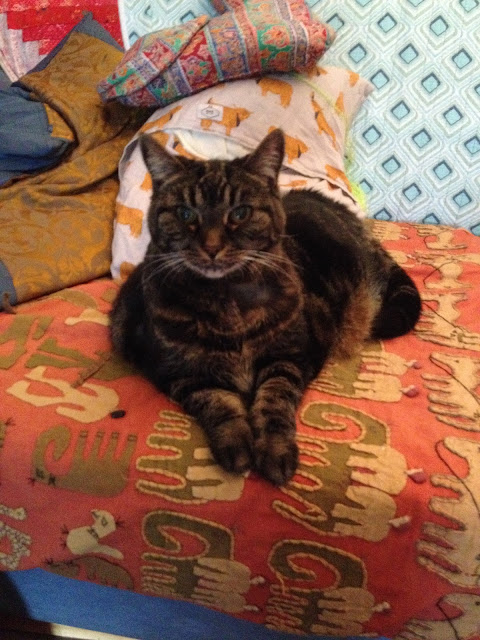 If you told Tiger 'no', such as when she was about to walk across the computer keyboard, or onto your lap when you were eating, she would listen and stop. Then, about two seconds later, she would do a slow walk, repeating her actions of a few moments before, and thus getting what she wanted. It was as if she thought that if she went really slowly then you wouldn't notice her. I have read that cats do that slow walk past other cats to avoid conflict, but Tiger adapted it in her own way. 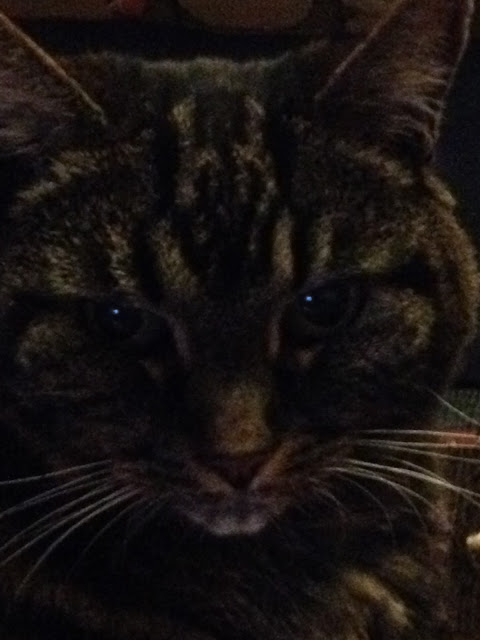 This is her looking at me at night. She came for a cuddle every night without fail, stayed till I put the light out, then went off to bed. I will always miss that cuddle Tiger, and I loved every one. xxxx
Posted by Sarah at 10:24 7 comments: