House Sparrows in the dogwood the other day. They kept flying off and coming back again like a little gang. There must have been insects in the branches though I didn't see them eating. We used to call them Spadgers at home. Andy used to call them Spuggies. I am from Kent and he is from Northumberland. Apparently they are called Spyng or Spurdie in the Orkneys, and Chummy, Craff and Hoosie in other places. They are the perfect LBB. (Little Brown Bird-I think that is a kind of twitcher joke for unidentified birds) A number of years ago there was quite a decline in their numbers, and I remember noticing there were not as many around. They are on the endangered species list in the UK I think but their numbers are gradually climbing. Another good excuse for being a fairly messy gardener! 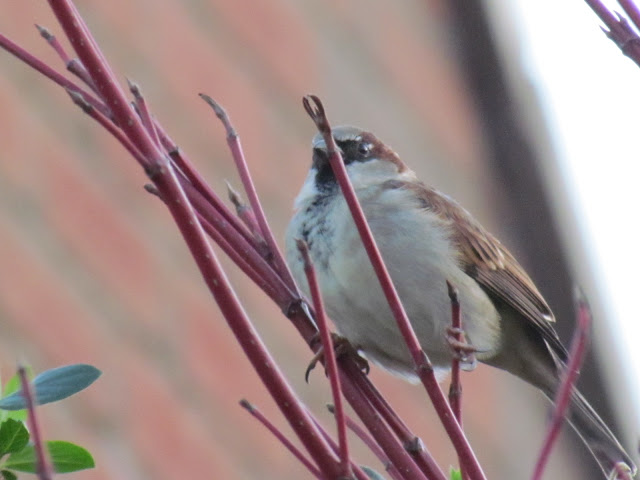 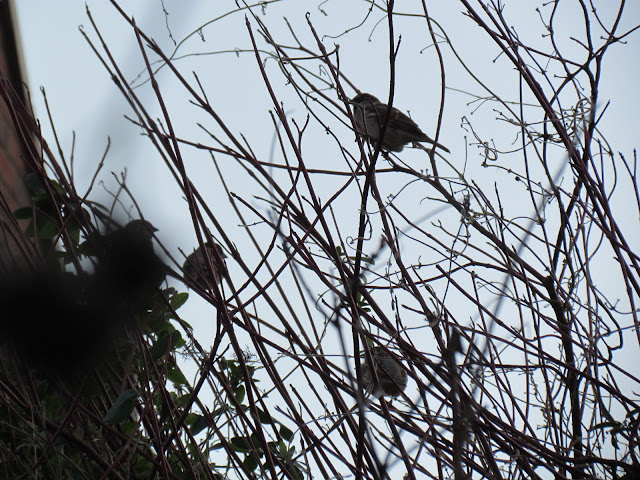 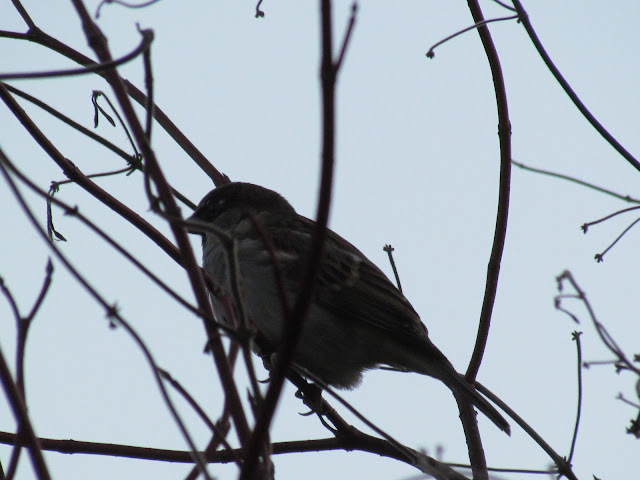 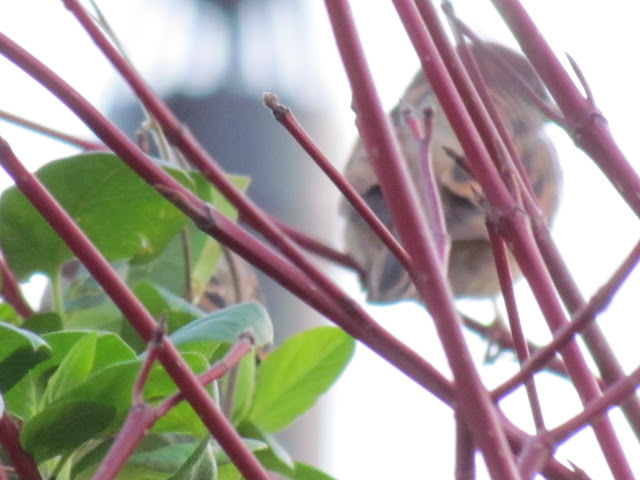 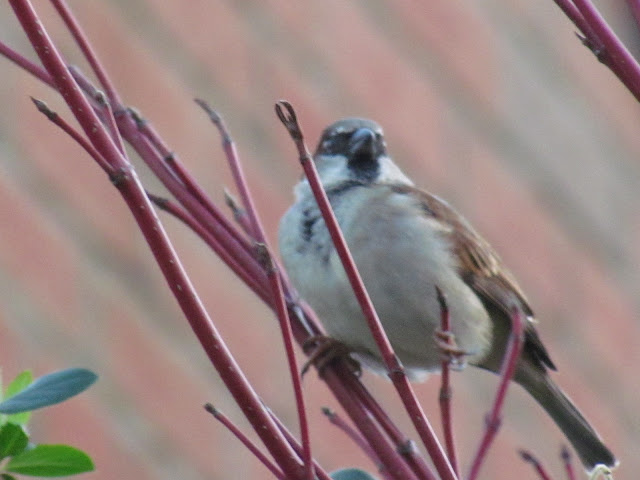 Lower Halstow at 2.30 this afternoon. Fog, bird calls, and thick clay mud, pushed up by machines into a large mud pie for a giant. Not sure what work they are doing there. We only popped by on the way back from Antony's. Unlike the first time we visited, the tide was low and the water wound through the mud until it disappeared into the fog. 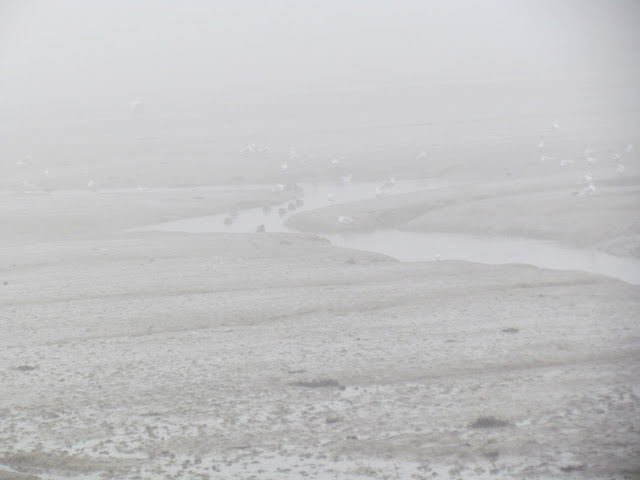 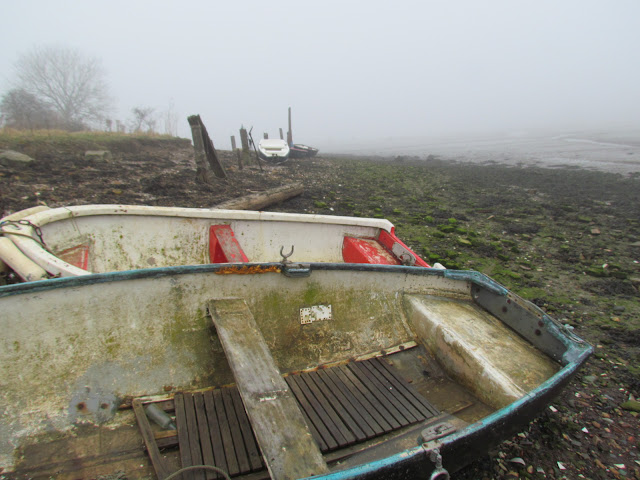 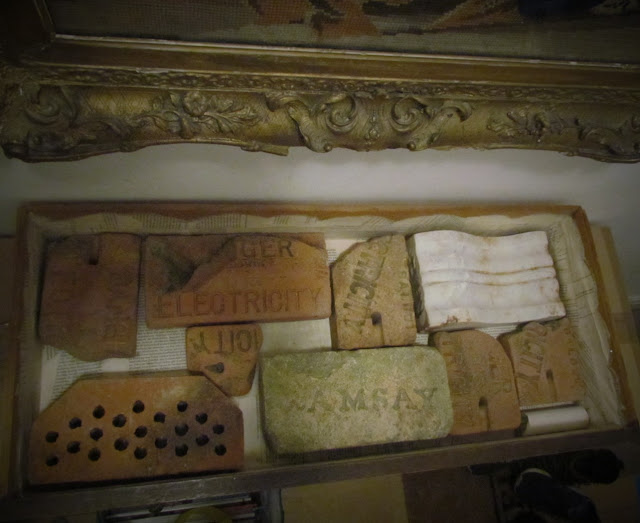 I would like to be one of those Mudlarks who finds tiny and precious thngs, which will all fit inside a shoebox, and not involve heavy bags dripping with stinking mud and river water on the long walk back to the car. I am not. I see big things and blue things. Blue glass stands out beautifully so can be tiny and I will see it. Bricks with lettering have a strange fascination and I have got a small collection. In this box are all my partial electricity cable bricks. I have one that is nearly whole, and I like the small piece that says CITY. The Ramsay brick is from Rotherhithe. I saw it on a gloomy winter afternoon and decided to be sensible, and leave it embedded where it was. Then I got all obsessive once I got home, and went back early one morning, possibly the next morning but I can't remember. That is one of only two times I have been on the foreshore in the dark. It was very early in the morning, about 5.30 or 6 and a bright full moon. It was a bit scary and spooky but magical at the same time. I knew exactly where it was buried so could go straight there and then home again. The piece of carved marble is from the foreshore at Woolwich. There are lots of pieces of lovely marble there. I still have not been to the foreshore properly for ages, but I did pop down there on the way to Esme the cat on Christmas day. I picked up one thing, a piece of china with a wing on it, possibly that of an angel.
Posted by Sarah at 15:14 2 comments:

Another trip to the storage unit today, and time for a coffee on the beach! It was a beautiful day. I picked up pretty stones, strolled along for a while, then off home again. My storage unit is now very full. We are having some damp curing work done in the bedroom next week, so I have been trying to clear even more stuff. My routine is to go there, then to go on to Sheerness which is about two miles away, and get breakfast from Tesco's cafe, then go to the beach. Last time I went I didn't get to the beach as it was absolutely pouring down. Today was much better. 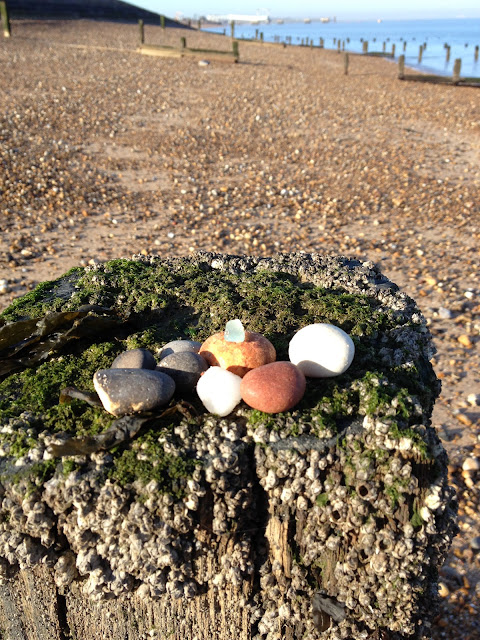 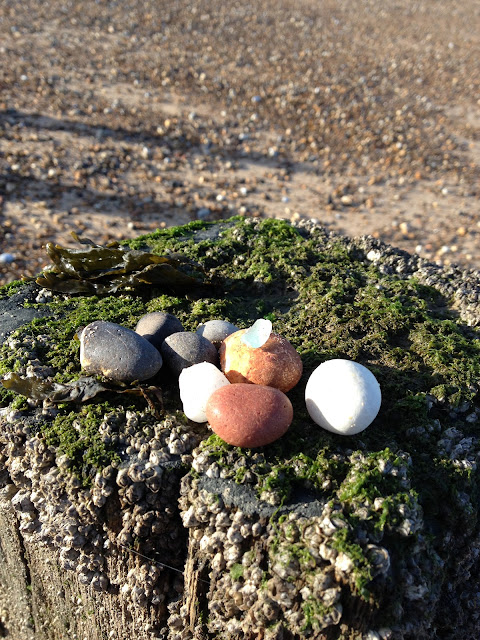 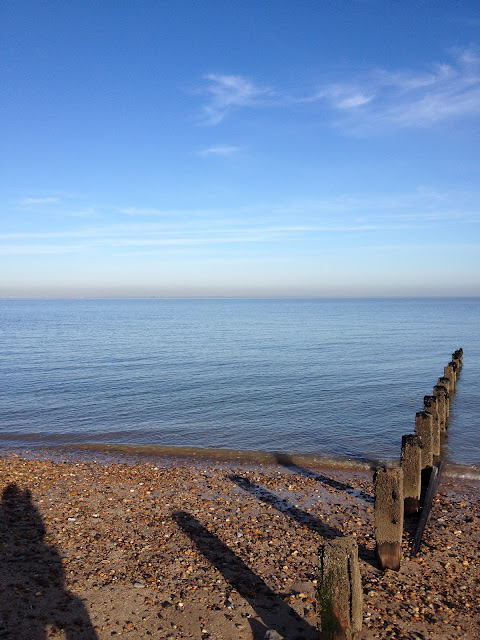 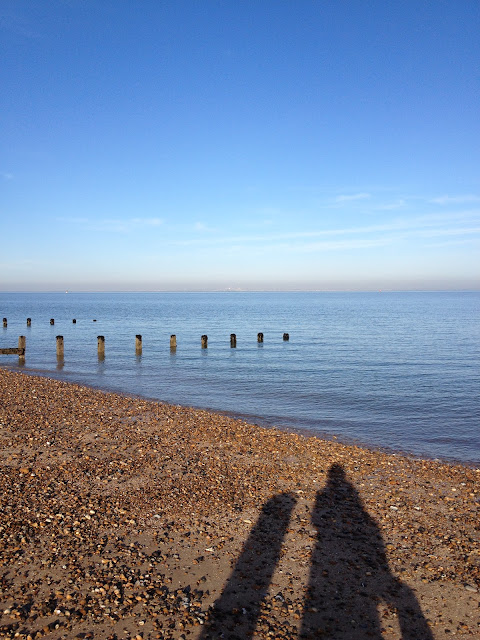 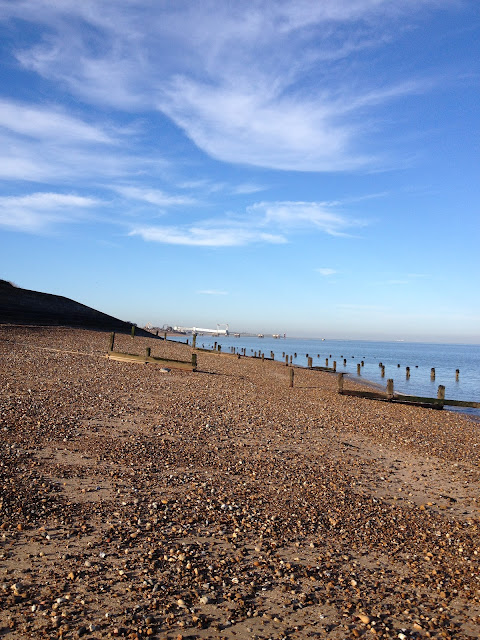 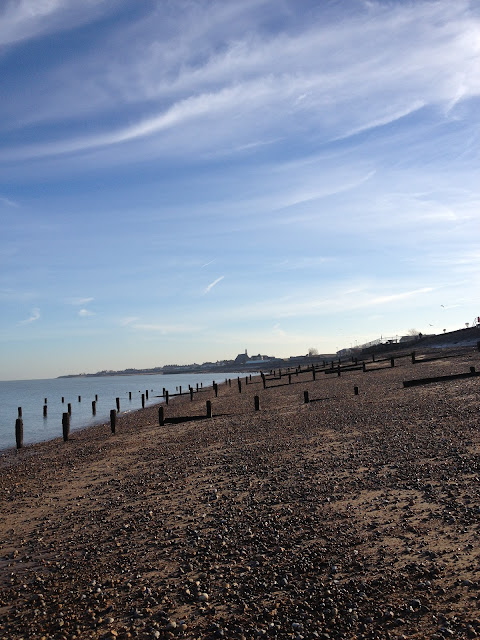 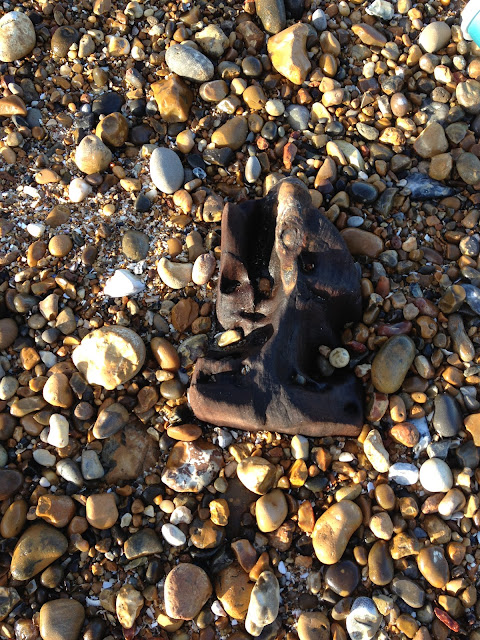 Hi Again!
The last picture is the remains of a wooden post. So worn but still there! The small piers are called groynes and are there to limit coastal erosion, trap sediment and stop longshore drift.
Posted by Sarah at 11:14 3 comments: 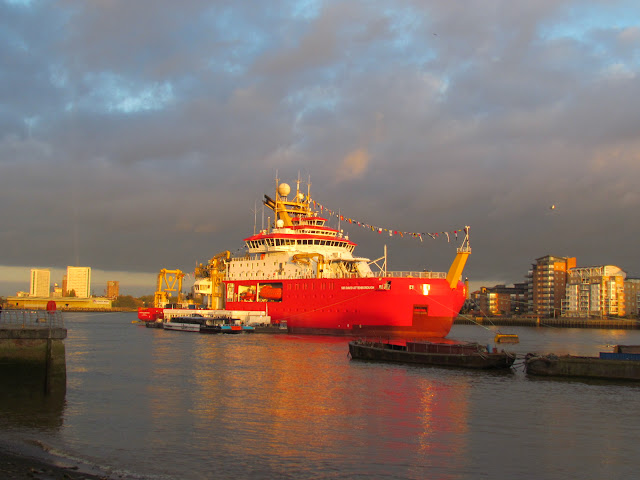 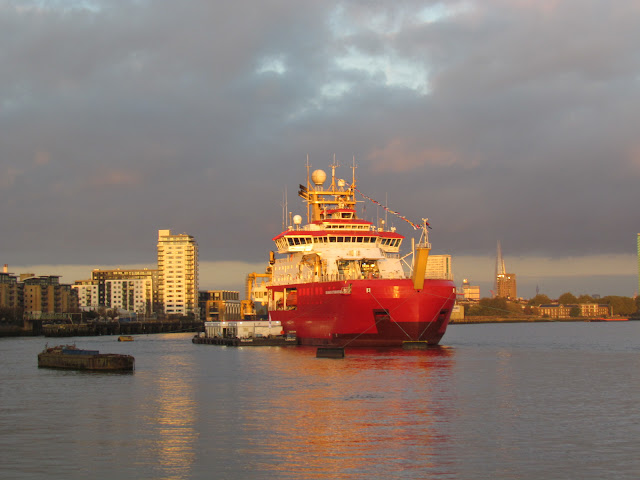 It is not Boaty Mc Boatface, but the Sir David Attenborough. (I think some people voted to name it the first name but the more sensible choice was taken!) (Here is the story of Boaty McBoatface)It is owned by the British Antarctic Survey and is a polar exploration and research ship. It was in Greenwich in October, and I was there early one morning after a cat visit so went to have a look. The light was beautiful and I wanted to post some of the pictures I took, but never got around to it. 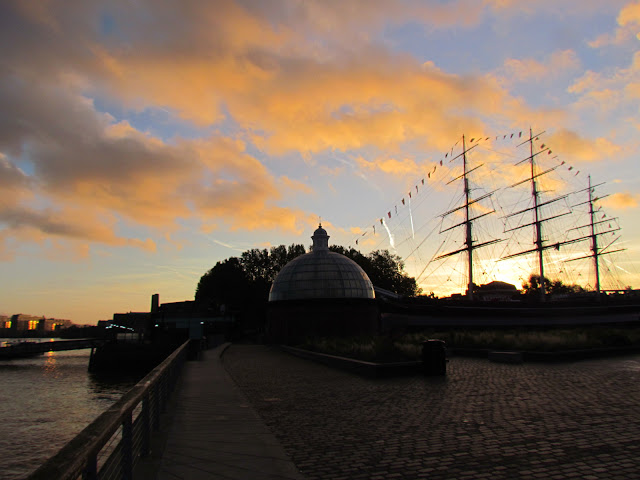 A much older ship, The Cutty Sark, and the dome is the Greenwich foot tunnel entrance. 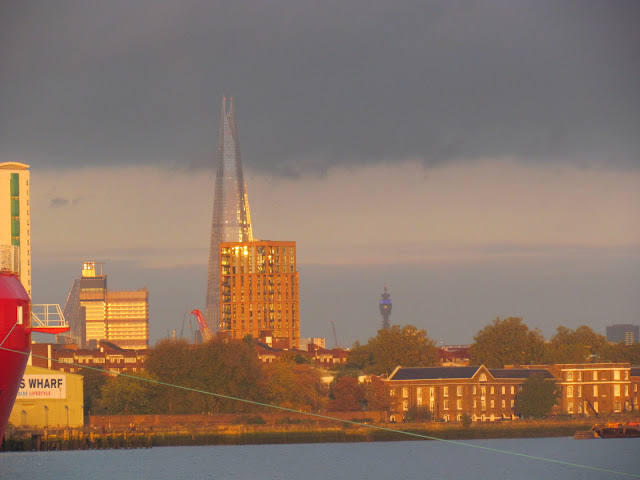 The Shard and the Post Office Tower, which are about six/seven miles away. Convoys Wharf can just be seen behind the ship. The foreshore there is one of the places I go sometimes, not that I have done that for a while. The site itself is the focus of a local campaign to get it developed into something good for the community, rather than yet another exclusive and expensive property development. 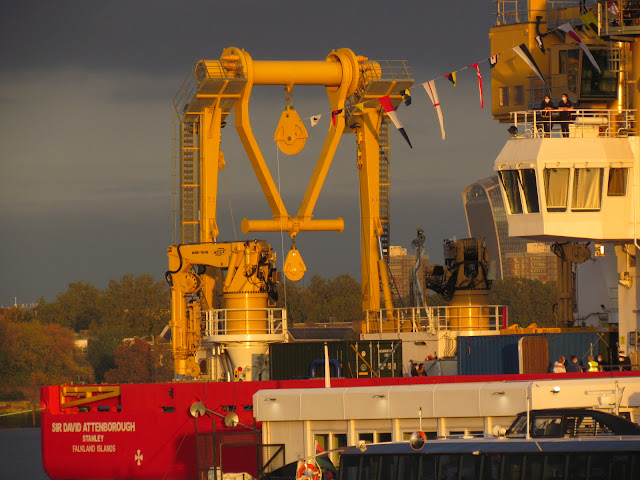 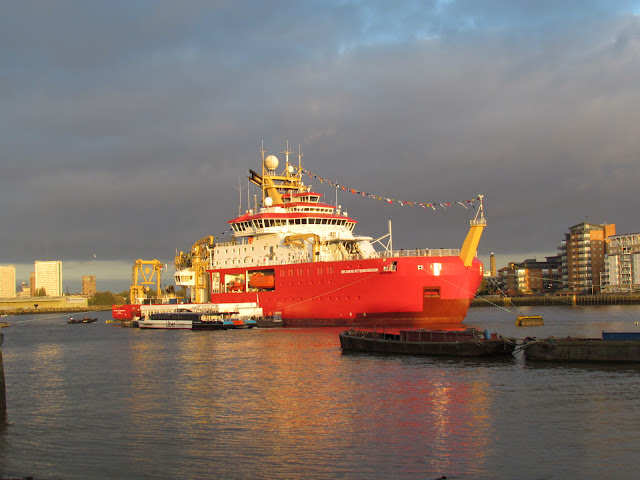 Happy New Year to anyone reading. I have had a long blogging gap but want to come back now!