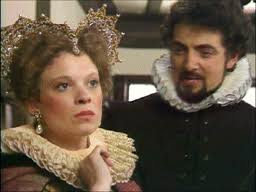 The lady in the drawing has become a strange hybrid between doll and embroidery. I am not going to put her in the book as she has not turned out like that. She is finished but unfinished in that I am not sure what to do with the edges. The only thing different to here is that I have stuffed the skirt. She now looks more Elizabethan than Victorian to me, and reminds me of one of the characters in Blackadder-the Elizabethan Blackadder. The woman who's husband had already been beheaded but Edmund had to pretend he was him, so wore a bag over his head. Sounds gruesome but was fairly funny and the actress looks like this. Found her! She is called Holly de Jong and the episode was called 'Head'. In it she plays Lady Farrow. 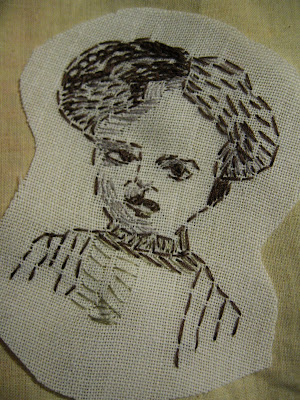 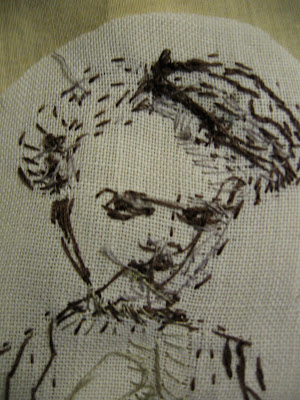 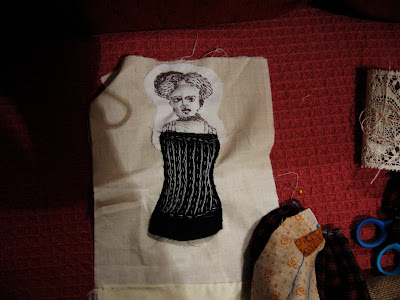 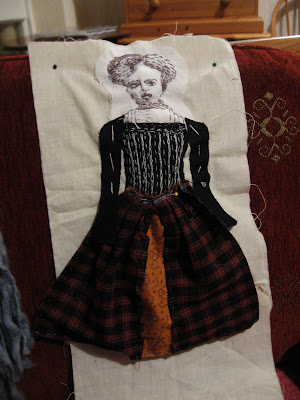 The arms in the finished doll have a lace doily sewn over them.


This is a picture from a book on embroidery I have. I had a look the other night for inspiration on stitches as I only know about three. But the book is really fancy and difficult stuff such as making your own lace and broderie anglaise-way beyond my patience or capabilities. I did like this picture with the caption which says
" Colourful needlework enhances the beauty and comfort of the home, while the knitted jumper gains in popularity with every season"
Indeed! 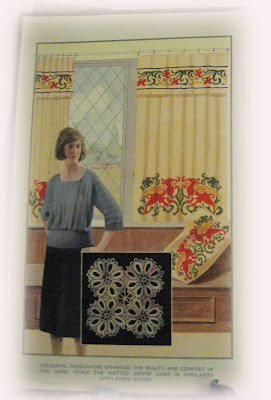 Looking for embroidery tips has ruined my Christmas present somehow. Andy gave me a Kindle, which is an amazing thing and worked fine on Christmas day and yesterday. Today however, I downloaded a free sample of a book on embroidery, which I didn't like the look of much. I deleted it but ever since then the screen has been frozen on a blank screen saying the name of the book at the top-if I try to open the other two books on there, or frozen on a screen saying it can't connect at the moment despite there being three bars. When I try to ring them up for help our phone has then decided not to work properly! I will try again tomorrow, and in the meantime be content with reading one of the many real books I own!
Back to the settee now, for more comedy tv and a cuddle with Cassie!
Posted by Sarah at 11:44

Amazing stitchery, Sarah. Sorry about the Kindle reader going bad on you. Hoping for a quick fix. A cuddle with Cassie sounds like a fine second choice.

Your embroidery is looking great, and she does look like the character from Black Adder.

Your lady is fabulous! To finish her, you could put her right sides together with a backing fabric and stitch round the egde, leaving a small gap to turn her through - this would give a neat finish with no raw edges. How annoying about your Kindle - I hope you don't end up tearing your hair out trying to get help from the 'help line'!!

Sarah, I love this lady embroidery (particularly like the stuffed bodice). What a great wall hanging something like this would make.
Bad news about the Kindle, I've never even seen one let alone used one!!

Hi, Sarah! Hope you've been having a lovely Christmas break so far! So sorry about your Kindle...aaawww... I wish I could share some advice but don't have much experience with those. Let us know how you get on. LOVE your Elizabethan stitched lady--hugely impressive. And I rather like those raw edges on the fabric around her face! You talent knows now bounds! Oh, and such treats was your Christmas lights post last time--such fun! :o) Keep enjoying these festive days! ((HUGS))

My desire is to hang out with you and make stuff until we can not make any more- we collapse in a heap and Cassie brings us tea. I LOVE the embroidered put together lady- just awesome, she! I got a pile of books for christmas- when I settle down to read , one page in, and I am snoozing- it is not the books, mind you, it is that I am weary...guess that happens when age creeps in and nails you to the sofa.
My one remaining kitty, for the very first time in his sixteen years, curled up on me comfortably last night! He is such a wild spook. Perhaps he reckons there is nothing to fear finally, and by finally I mean "end"...I really don't think that he can live many more years. He does surprise me.

she would look great in an elegant frame! (no glass)...

Youir embroidered character looks amazing, Sarah. Aaaah,knitting or embroidery or quilting? I cannot decide as each time I look at a blog I see inspiration! And of course, paper is stil my first love. Talking of which, thank you so much for the lovely Xmas card - it arrived yesterday and I love it! Did you make the original of the print on the front? I think your brad star is an excellent idea. I will adopt it for new cards I make. Now I will just have to find star brads!

Sorry about your Kindle! I hope you find a solution soon!