I didn't know the story of Rapunzel very well. The fact that her mother and father could not have a baby for a long time, and that the herb that the husband steals from the witch's garden is called Rapunzel. It is horrible really because they lose their baby until she is quite old. The morals are hard to fathom. The husband was only taking the leaves because he was worried about his wife, and the witch was only taking the child because she was stolen from. I don't think a child for some salad really constitutes an eye for an eye though. Ah well, those are questions I did not have to worry about today when I used my dolls to help tell the story. And I expect, like me, most of the children will remember the most exciting part of the story, the fact that Rapunzel has extremely long hair which people climb up and down. I bought some herbs for a touch of realism-today was mint-we all had a sniff and some liked it more than others. Tomorrow is dill and coriander. 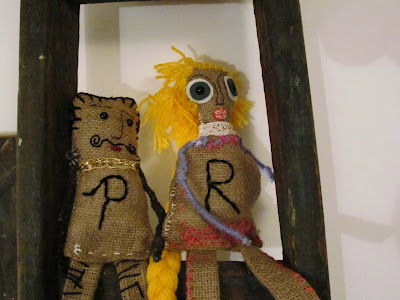 I made two of each of the main characters-so each carpet had a set, and there is a set for the children to play with afterwards, and one to keep for the adults to use. I was most proud of the design feature that Rapunzel has detachable hair! A long plait, a bit of weaving and some elastic worked very well. 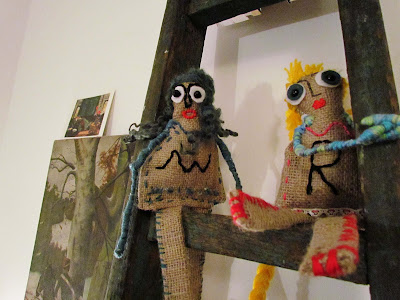 Here are a few pictures of the Rapunzels, the Princes and the witches posing on my book ladder. (It became my book ladder earlier in the year, rather than my lovely but doesn't have a purpose ladder. It works well, though needs to be attached to the wall at the top or it pushes away with the weight of the books and falls over) 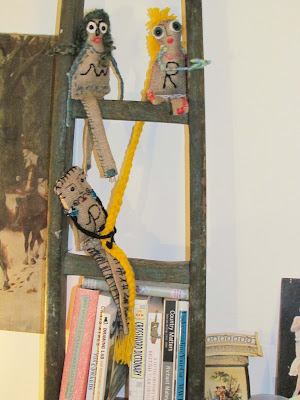 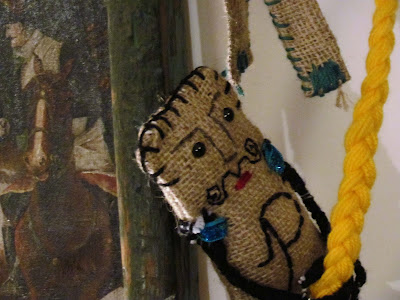 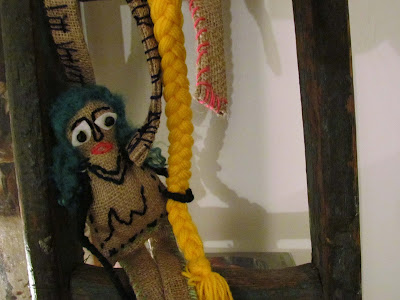 Two shades of green and curly wool tops from Skye became the hair for the witch. I needle felted it on which worked really well. Some yellow wool I have had for about ten years is the hair. I used some recently bought hessian to make the bodies, and wrapped pipe cleaners with wool to be the arms. Don't cut up loads of hessian while wearing flanelette pajamas. I had to get the sticky roller out even after they had been washed. I really enjoyed making these as they are quite rough and ready, and I am better at that than polished and smart!
I embroidered the initial sounds of the characters on their fronts so they can never forget who they are.
Posted by Sarah at 13:02

Awesome Rapunzel rendition! These dolls are wonderful!!
Have a great day.
Always, Queenie

Wonderful! I bet the kids loved it and will remember the story now.

Your creations are so full of fun. I like the big eyes and the long, long braid of hair.

I always wonder how poor Rapunzel was able to maneuver with all that hair hanging off her head. At least caring for it gave her something to do while she waited for her prince.

Rapunzel adventure is really nice... thank you for sharing you wonderful story of Rapunzel I enjoyed reading this article.

Love your view of Rapunzel and your dolls are gorgeous.

haha... these dolls are so cute, Sarah! Love the big eyes... and of course, the long, long braid. But you know, I didn't know that story behind the story of Rapunzel...it's really quite sad. :o/ It's amazing how Disney and other take these stories and turn them around...LOL... Happy Day ((HUGS))

Your dolls are adorable. Yes, I had no idea Rapunzel had that whole story. Like so many kids, I just remember let down your golden hair part.

These dolls are so cute and adorable. Love the long golden tresses. I have begun to follow you so that I can see your new pieces. I also loved the cloud dress. I am also a "sky watcher"

Hope to talk to you again.