The things that caught my eye

Walking into town for something to eat the first thing to catch my eye was this bright badger. He would be fun to felt. He would be better than the weird tree I made the other day-in my mind it looked good-in reality I am not so sure. 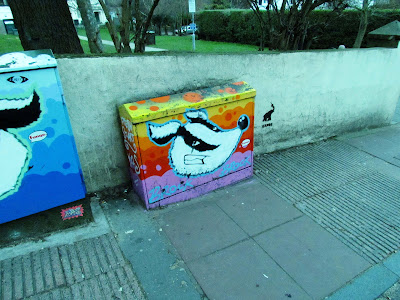 Brown's restaurant had a Parisian feel, and we had a French waiter to enhance this. We had cocktails-I had a delicious one with pomegranate in it, wine and fairly good food, though I had to send my main course back-shepherd's pie-totally burnt on the top. As the waiter put it down he gave it a funny look and that convinced me. This is only the second time in my life I have done this-most embarrassing you know, but if something looks totally inedible then there is no choice. The second one to come back was delicious. 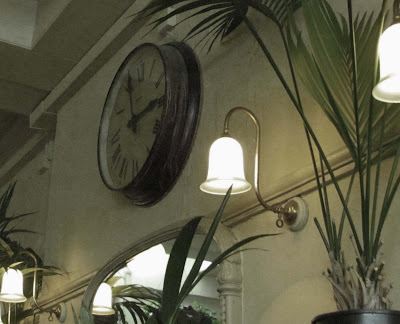 I wanted to see the sea, so we walked down there, past cosy windowed shops. We came out of the shelter of the side streets and it was freezing! We didn't linger. 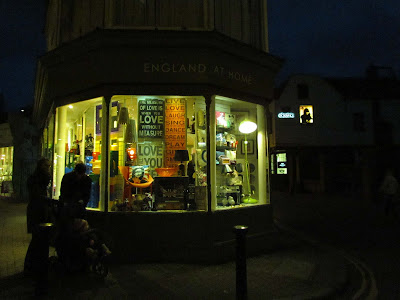 I got two pictures of the pier at night-both blurry! 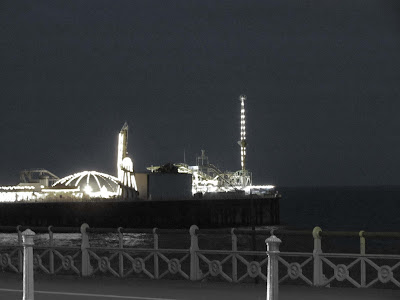 We met our niece for a drink in a pub near the station. It was lovely to see her for a while before going to the party. A singles party full of songs from the past-good and bad! Then back to the hotel in a cab as the weather was horrid. Snow which later turned to sleet and to snow again a bit later. It didn't really lay in Brighton so I never got to see the sea in the snow! The journey back on the train was fine though, and very pretty. 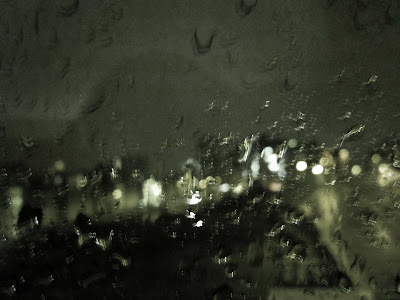 Cafés near the station. 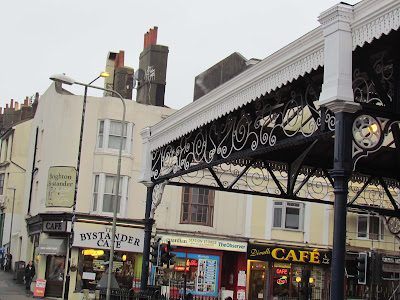 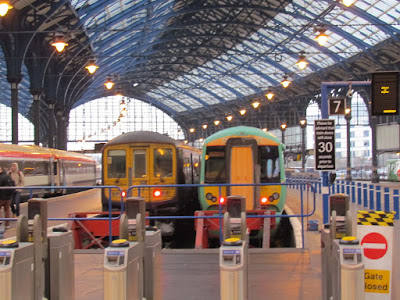 A little fox in the snow that Andy's brother spotted. 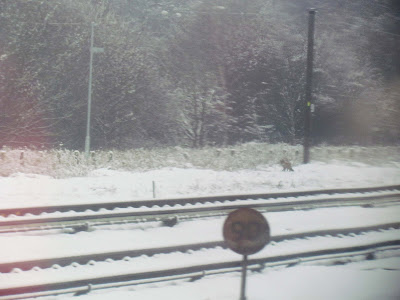 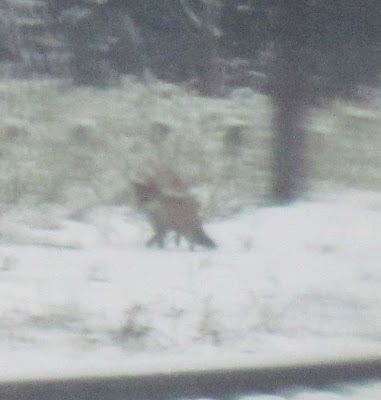 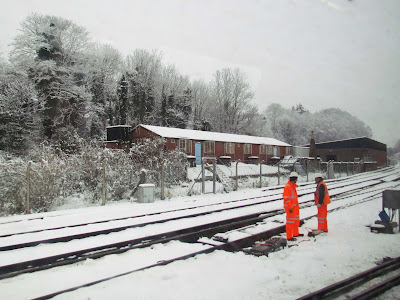 Orange men and a blue door. 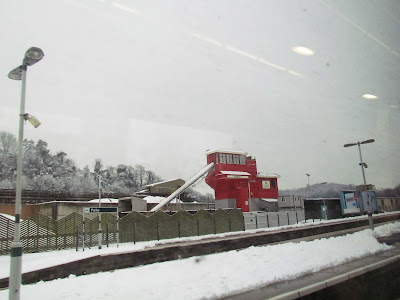 It's never good when your waiter gives the food a funny look, is it?

Yours is the only blog where you can see a "bright badger". I love it here!

Do come and read my children's poem about a monkey and a tea party.

Aside from having to send the food back, it looks like a good time was had by all. Thanks for sharing your pictures with us. I really like the winter shots with the bits of bright color.
Have a great day.
Always, Queenie

Sounds like a lovely day, Sarah and how lucky to spot the fox. Nice to meet you!

Lovely, lovely, lovely. Now listen to me for a moment. The only person to be embarrassed should be the chef for sending that out without a thought. That is sheer nonsense. Someone proud of his/her food would never let a customer see a failure.
Or send something else saying that there was a problem with the oven or whatever, but not to ruin the meal for their guests.

I wanted to ask you this before, and I keep forgetting, what is buttermilk called in Britain? I could not remember if it is buttermilk or something else and I certainly couldn't find it there when I was looking for it. I have posted a recipe for some really delicious - what we call biscuits here - and I thought maybe you would want to try them. They are worthy and not so much trouble.

Take care of yourself and stay warm. Hugs from here.

This looks like quite an unusual but fun winter holiday. At least fun until there is travel involved. Even in all that winter you found bright colors and a busy fox.

Glad you got back safe. I like the idea of the restaurant, tho' not the burnt offering. The shop front and pier photos offer a warmer feeling against the other pictures which convey how cold it must have been.

Oh Thank you for taking us along! Very enjoyable! The red building looks like a giant chair- is that it's intention? Someone should put a giant Telly in front of it.There you go, guerilla art!
Sent a small parcel to you yesterday, I know it will take ages to get there! Let me know...

The poor server probably felt more embarrassed having to bring the dish to you than you did asking for a new one! Oh and to see a fox! We don't have foxes on Vancouver Island (just deer, cougars, black bears, whales, sea lions along with the smaller wildlife).
Love the blue door!

love the photos! I've only driven through Brighton once on the way to some conference or other a long time ago. Loved the Pavilion and would like to go there properly but it's such a long way from here.

I thought it was Brighton.....was going to ak untilI saw your label.
The snow looks so pretty.

Oh, how lovely & special the sighting of the fox, Sarah! LOVED seeing/hearing about your trip... glad you had a great time, in spite of burnt shepherd's pie. ;o) Love the colorful badger... Happy Week ((HUGS))