Recently when things have made me laugh I have had a few occasions of near hysteria-usually on my own in the car-where I almost can't stop laughing. Such as today when a van passed me on the A2. It had the name 'Accurate Roofing' on the back. It just struck me as really funny and that the least a roof should be is 'accurate'. Later it didn't seem so funny but it did make me laugh at the time. And other times I have had the same thing but with crying-such as recently when I watched a programme about a project to re-introduce tigers to an area of India. There was a female tiger and a male in quite close proximity but they lived alone. Then they got together to mate and spent about five days in each other's company. Then they parted again. A few days later the male tiger was found dead-poisoned by the local people in fear for their cattle. I just could not stop! I think it is the season. I always forget how this time of year makes me feel, and how I fight against it but still it descends upon me. I am trying to eat well, do exercise etc but all I really want to do is curl up in bed! There are compensations-weekends away-this weekend we are going to Leicester to see friends-looking forward to it if you are reading Rob! Little cats that love me. Books-I am reading lots at the moment-a great children's novel called 'The Sterkam Handshake' by Susan Price, 'One' by Victoria Alexander , 'Death Comes to Pemberley' by P.D.James on my Kindle, and also 'Molesworth'-if anything will make me laugh it is that! Through Sam I discovered the short stories of John Cheever-and am enjoying those. He wrote the story that the film 'The Swimmer' is based on. 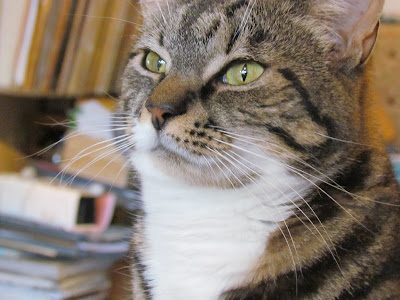 There are things such as interesting toilet graffiti-of the kind you don't see much anymore-to enlighten me. 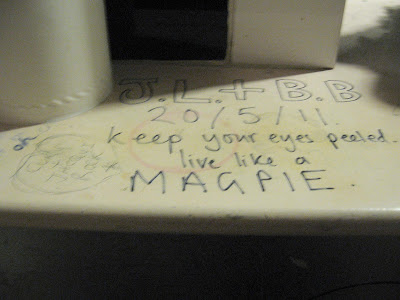 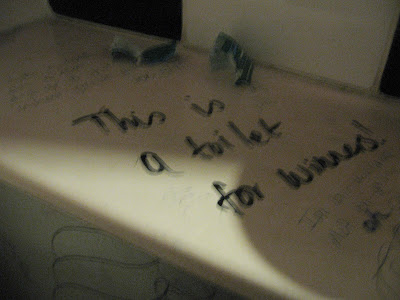 And I liked the positivity of this one!

Then there are lovely surprises in the post. I have taken part in two swaps recently-this is the first-a postcard swap organised by Anne. I received a lovely selection of made and bought postcards from Lee in Australia. I love the stamps she used, the lovely photos she took to make her card, the vintage crochet touches and the pretty packaging. Thank you Lee! (And Anne!) 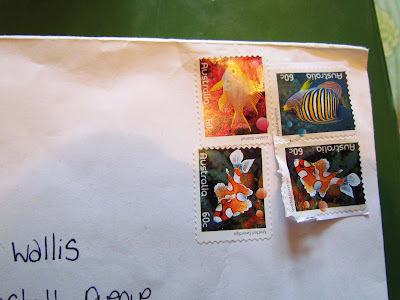 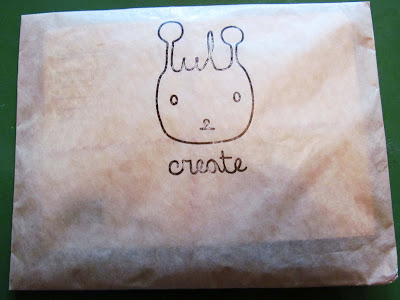 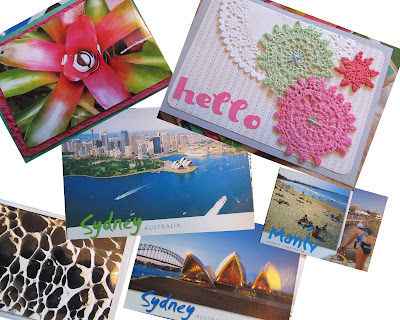 I'm quick to laugh and cry too - always have been.

It's a tiring time of year and SAD affects lots of people. Half-term and the lengthening of the days should help - the clocks go forward in March and we might see some sunshine.

I too am quick to laugh and cry. Thankfully laughter comes easier to me. Laughter is good medicine. A laugh a day keeps the doctor away!

I am right there with you- emotions are taking me over! I found myself in traffic coming home from getting high protein food for our dying kitty and suddenly out of nowhere I thought about my friend who died when we were 14 years old...haven't thought about her in years then boom there it is and I am weeping trying to stay on the road! WTF!Like she just died today!
In winter I have to be very careful about what books I read and I definitely can not watch anything involving little kids or animals.My emotions can not be trusted! I am glad that I am not alone in this craziness- THANK YOU!

I always finds that my moods lighten as the days lengthen - the last few bright frosty days have been a real lift to the spirits. Seeing Lee's postcard of Manly was a lovley reminder of meeting her there!

Oh, no... now I'm crying too! That tiger story is tragic! :o( I'm the same way, Sarah, and not sure it's just because of the season. I feel & experience things very deeply, so I'm either smiling & laughing, or crying...LOL! Although I do experience SAD this time of year, and the emotions do seem to run a bit deeper...hhhmmm... Funny toilet graffiti--I like the positive vibe. ;o) LOVELY fun mail--such treats. Happy Weekend ((HUGS))