The Blackheath firework display and Bernini's Angels on the Ponte Sant'Angelo 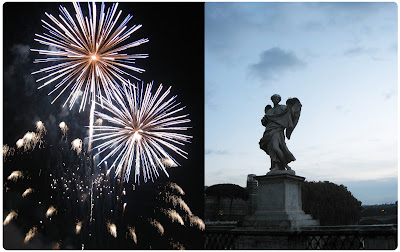 The Angel Bridge was one of my favourite sights in Rome. The bridge was built by Hadrian in 136, and enlivened by Bernini in the 17th century with his beautiful angels. We saw it at night and in the early morning. It leads over the Tiber to the Castel Sant Angelo-on the sight of Hadrian's mausoleum. 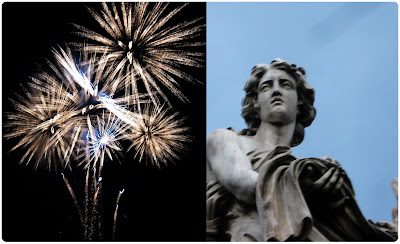 Fireworks and angels seem to go together quite well. 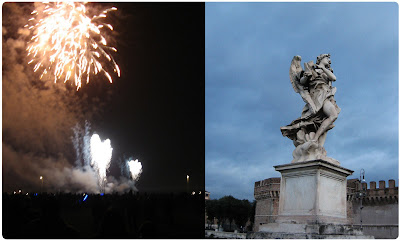 The firework in the bottom left of the last picture looks like a heart, or angel wings. I like the way the people are lit around their outlines. It was a good display. Blackheath falls into the boroughs of Greenwich and Lewisham, so traditionally both share the cost. This year Greenwich pulled out of paying at the last minute so well done Lewisham!
Posted by Sarah at 11:31

Very interesting juxtapositon of subjects. Those two go together very well..with the night and lights and sparkly things flying through the air. I would love to see some Bernini up close and personal. Putting Italy and especially Rome on my list.

I always love to visit your site and see what new header you have on display. This one is so full of excitement! Love the soft background and the sparklers in front.

I think the juxtaposition of the two is fantastic. I am certain that there must be thousands of cherubim and seraphim on hand during Guy Fawkes Day and certainly here in the states on Independence Day. What self-respecting angel wouldn't be attracted to those sparkling shooting shapes. The Bernini statues are stunning. Your photos are superb and the header is so colorful and enlivening. Really Sarah, this is lovely!

Leenie and Noelle have said it so much better than I could have!!

leenie and Noelle said it much better than I could!

Love how you have posted these. Gorgeous on both counts.

Very beautiful Sarah..Love them xoxox hey went site seeing the past few days around my city come take a look...Even found a double decker bus oh to see one in London though ...wow

Ooo... such WONDERFUL photos, Sarah! A little bit of England, a little bit of Italy...*sigh*... We have nothing like Guy Fawkes day here. A few fireworks at mid-summer... a little at New Year... LOL! Happy Days :o) ((HUGS))

I received the book yesterday and I LOVE it! Thanks again!