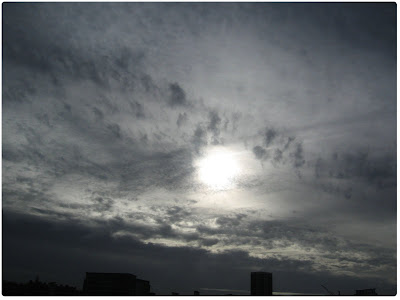 I love grey so grey days are OK. The sun tried to come out this morning but just managed to shine through the clouds a little. We both had a day off from working today and went out to see a couple of exhibitions at Tate Britain. We decided to get the Thames Clipper as the Jubilee line was off, but got the wrong one. Westminster was in sight when the boat started to turn around! We got there eventually. The exhibitions were both good. One was Rachel Whiteread's drawings and the other was the photography of Eadweard Muybridge. Both fascinating and inspiring.
I found this review which, although quite negative about her previous work, sums up how Whiteread draws in a much better way than I could-

''Her gift is for applying a sculptor's feeling for materials to two-dimensional images. In particular, she uses the obliterating opacity of correction fluid to stark effect, blanking out a building in a street, or a step in a staircase to trip up the mind, making it fumble through the white-out in search of what is no longer there.''

I had never thought of using correction fluid as an art medium-but think it is such a great idea-so bought some today!

Eadweard Muybridge had an interesting life and long career as a photographer. He is most famous for pioneering techniques which allowed photographs to be taken of animals (famously the horse-showing how all four legs leave the ground at a certain point in a gallop.) and people in motion, thus showing in detail what the human eye could not perceive. This lead to his developing the zooipraxiscope-a device which took the still frames and reanimated them. Here is a little example. (The drawings are from photos) This was early cinema. His tale is fascinating and the photos he took of the American landscape are beautiful. I was a sucker for the moving ruler illustrating a naked running man! It must have been so exciting to see these pictures come back to life for the first time. It is funny to think how excited I get when I do one of those little animations-how things have come full circle for amateurs like me to try really basic techniques digitally. It makes me wonder what someone like Muybridge would come up with now, with all the technology available.

I took lots of photos along the river-most of which were not great. I played around with the few I liked.
I used one of Kim Klassen's textures-this Friday's freebie actually-called appropriately 'Grey Day'. Go and visit Kim and sign up for her texture lovin' list and you will receive freebies and great offers on other textures and courses. 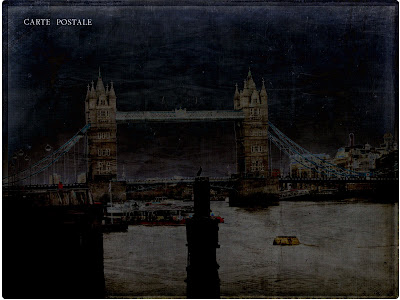 This picture was taken because of the cormorant sitting on the post in the foreground. I used Kim's texture, played around with the blending modes and added my picture back on top before doing some more blending. The effects you can get are so varied. 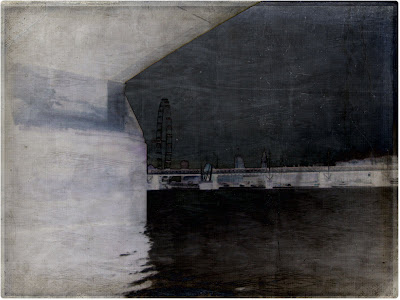 I love the way this one has come out. Like a drawing or etching or some such art technique! 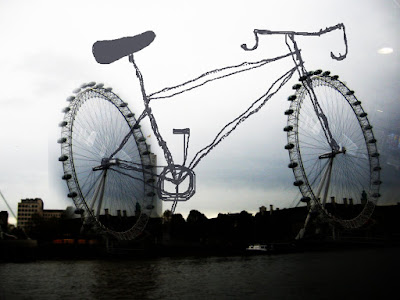 A giant bicycle has somehow replaced the London Eye! 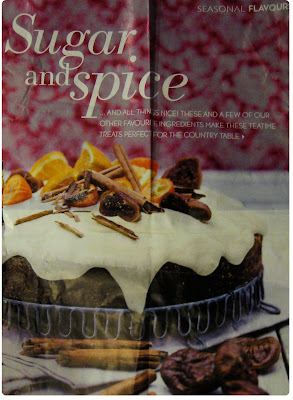 As promised the recipe for the fig and cinnamon cake. It is from December's issue of Country Homes and Interiors. It is really lovely cake-the figs are toffee like and just the right amount of chewy. I am not sure about the icing though. It uses Quark cheese-a kind of curd cheese. The amount of icing sugar it recommended made no difference to the runniness of the cheese and eventually I gave up adding more. It tasted OK with the orange zest and vanilla essence. Any cream cheese type icing with these flavourings would be good. I kept the icing in a container rather than pouring it on so we have used it as a sauce. 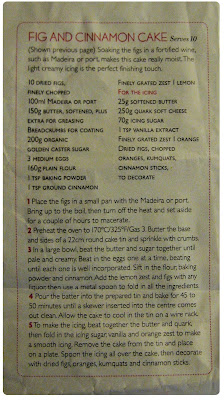 If you click on it it should enlarge big enough to read. Let me know if not and I could email you!
Posted by Sarah at 12:49

The exhibition looks like a fun one. You are so fortunate to live where such events are so close. I love the fun effects you tried on your photos. The huge bicycle over the city really is an eye-catcher!

I just printed out the fig cake recipe. It looks so yummy. I'll have to make some translations from metric distance and weight but that shouldn't be a problem. The U.S. should have gone metric long ago. Don't know if I can come up with kumquats, but that is just for the top decoration so no problems. And I think I'll make a cream cheese frosting for the icing. Have no idea what quark soft cheese is.

thank you sarah!!
i am breaking out the candles!
xoxoxoox,
rebecca

Thank you again for all your visits which are dear to me, and I hope to be able to visit more often now that the sea is calmer :)

Wow! I'm gobsmacked by what you've done with those photos! They are mind-blowingly amazing! Seriously! I LOVE that bike one especially!

I love what you do with photos - the most I ever do is crop mine!! The London Eye bike is brilliant!! It has been grey and drizzly today, so no Sunday walk. Hope you have a good week, love Anne

Sarah, Dearest Sweet Fig, I doubt that I'll be baking the figgy cake any time soon- I am sure I would eat the entire thing myself...I so love what you are doing with your photos- they are absolutely wonderful! Your artist eye can make art out of anything and everything, much like Rachel- loved the video very much. Love that she made the brain,testicle, walnut connection.... Such a rich, entertaining inspiring post- thank you! A parcel on it's way...more junque!

What clever pics Sarah. I always marvel at your clever art and photo work. The London Eye bike is such a clever idea. Looks like a great recipe too. Have a great week. Ros

I love the color gray. Absolutely LOVE it. And, I think it is so underappreciated. So, you can guess I love this post. Love it.

terrific post of results
i never would have the correction fluid as a product either
kool!