Work in progress-a shed as just a frame with no roof. 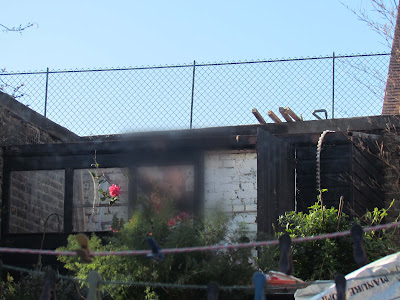 I did this part. I used the rest of the Sterling board-or OSB board-Oriented Strand Board-I had no idea what it was-just looked it up-which was used for the roof to make panels, so I can hang tools. I used my hand drill and a power tool! An electric screwdriver my Dad bought for Andy a while ago. It was great! 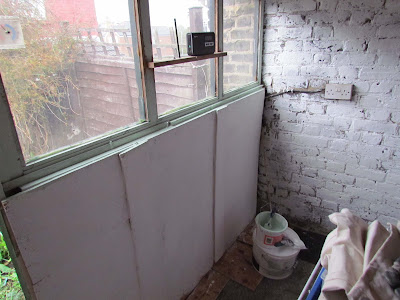 Lots of painting went on in there today-using up all the old tins, and one completely new tub of emulsion I didn't realise I had. 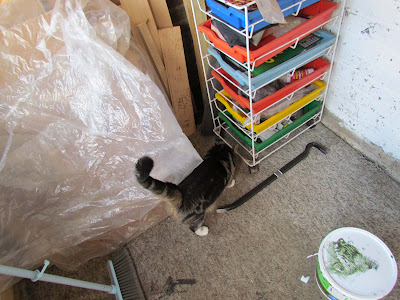 Cassie loves the shed. The other two have not been in there at all yet. 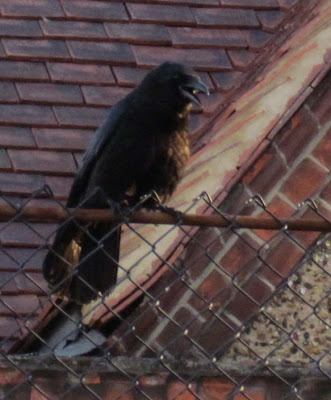 A crow who is nothing to do with this post, but was being strangely noisy yesterday evening-not normal crow noise but a kind of throaty chirruping. I think it was talking to its mate. 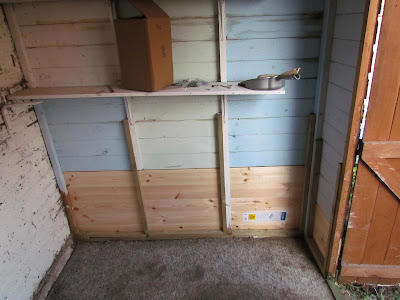 Replaced boards at the bottom. 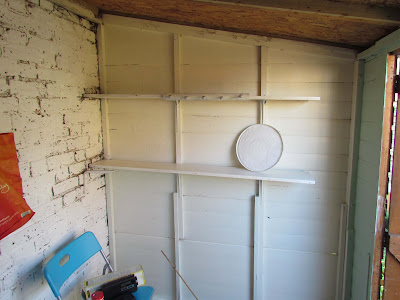 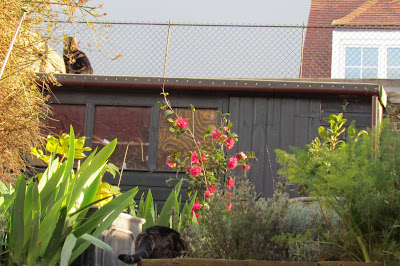 The two pictures I took of the outside were blurry for some reason, but these of Cassie on the roof will do. It looks so neat! I have done three more coats of outside paint and will keep going until it runs out. It goes on very thinly. 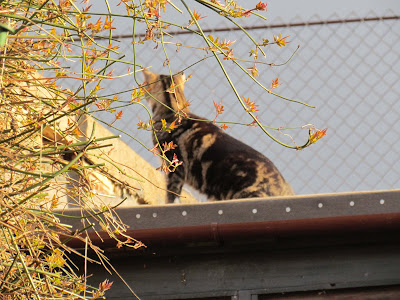 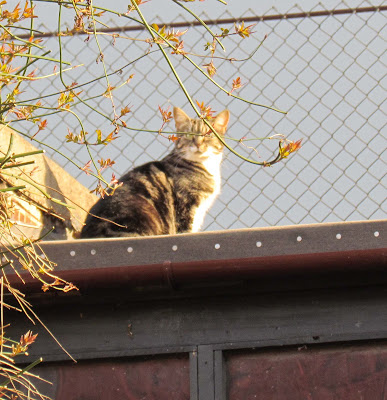 Someone asked in the post the other day if it was going to be my studio. Wouldn't that be fun? I would love to have a little retreat in the garden to go and listen to the radio and do something or other creative. I could put all my little lanterns in there, and we could have cups of tea on rainy afternoons. To achieve this I need to get rid of an awful lot of accumulated stuff, both from the shed and from my art storage boxes. I have to admit I have so much stuff I don't use half of it as I don't know what is there. I am going to donate some and sell some. Operation cleanup will start tomorrow, but first I have to get the essential boring stuff back in there-the suitcases, cat baskets, tools and fold up chairs.
Posted by Sarah at 12:59

Looks great! and the kitties love it too :o)
Have a great day.
Always, Queenie

It looks so clean and tidy Sarah. It would make a nice tea house but I understand about needing a place to store things. Isn't it amazing how many things we gather after being settled in a place for a while!
I think the crows have spring fever here in Canada too. They are driving my cat nuts. Soon they'll be dive bombing her when she gets too close to their nests in the neighbour's yard. Happy sorting to you!

Wow you've been busy! The weather has been so bad here it's not been fit to do anything outside. And for some reason I haven't felt like doing much at all, not like me.
In my kitchen there's a bit of concrete filing a hole in the old floor. It has a dog's pawprint in and 'Judy 1988' written. I hadn't the heart to change it!

Very FUN to see your shed project in progress, Sarah...love how you've made over this space. And it looks like it's very much kitty-cat approved too. ;o) Happy Weekend ((HUGS))

You get a lot done at your house. Good thing Cassie is there to keep you in line. Good luck with that de-junk project. When I have such an undertaking I try to ask myself if I would keep such things if I were moving. Sometimes, sometimes, that helps me decide.

I have to admit that I think crows are one of my favorite birds. We have two that seem to hang out at our house. Gets the cats all riled up! They are so vocal and seem so smart. I have never thought to take a picture of them. I'll have to catch a picture of them one morning.