Mum found this photo ages ago and had it on her easel in the sitting room, along with her unfinished painting of my sister's tortoise Steve. My brother pointed out that I bear a striking resemblance to the woman from the film 'The Ring'. I do look a bit evil I suppose. My Dad took the photo. I don't know what the occasion was. It was either 1975 or 1976. Maybe it was at the end of the summer term when we were leaving. I am not sure if this is only half the class, as there are only fifteen children in the picture. Maybe class sizes were a lot smaller then, I don't know. It was probably taken in the garden next door to the playground, which was where the vicar lived, and where we were allowed to play in the summer. It was great-because it had a secret hidden tree cave at the back which we loved. I can remember some of the names of my class but I have only labelled one of them, as she has such a lovely name-Paula Rose. She had pretty red hair too and was a sweet person. 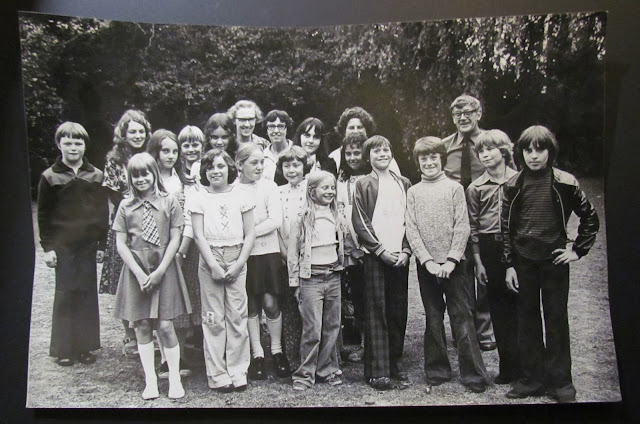 Mr Chaston was lovely. Mrs Bowker was my year 6 teacher-not called year 6 then but probably Class 6. She was from Northumberland and was a very strong character who I liked a lot. She played the accordion and taught us country dancing. She and her husband Bob, and daughter Ann became good friends to our family when my parents got divorced, and they were very kind to my Mum. Mum kept in touch with them both until they died, and with Ann until Mum did. I had a lovely letter from Ann when Mum died. I will write back sometime. I should have done already but everything was so difficult so I didn't. Mum used to worry about Ann and supported her quite a bit I think. We used to go to their house sometimes. It was great. In the middle of woods in Kent, with dogs and cats, music and weaving. They had a lovely Alsatian called Nicky who used to hide his head under things and think he was invisible. He used to suck my arm like a baby sucking its thumb. Sounds disgusting really but he was a sweetie 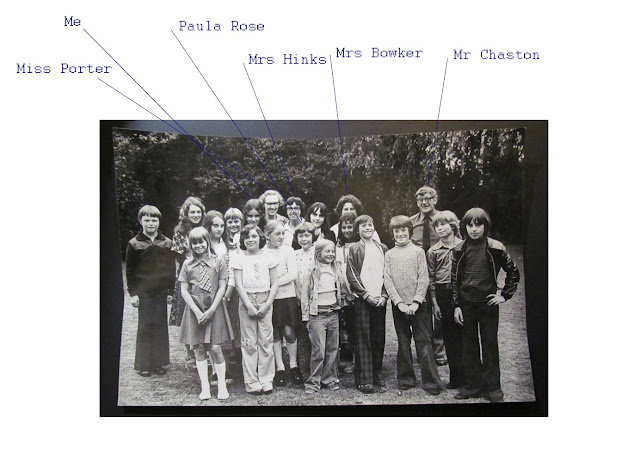 Mrs Hinks taught me in the second class. My first teacher there was Mrs Bottomley. She used to worry about me because all I did for ages was quietly cry! I hadn't been to nursery so it was the first time I was away from Mum and clearly I wasn't happy about it. 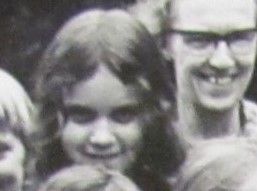 And then there was Miss Porter. Straight out of the 1940s with her tweed suits and short bob. She was big on maths and I wasn't. I used to copy the boy I sat next to and hope for the best. She had this fantastic role play shop in her room, with salt dough cakes and bread, but I don't remember ever being allowed to play with it. She also had a poster of wild life, or maybe just birds, that I would snap up if I saw it in a charity shop or market now. We sat in rows, which I don't think was very on trend for the seventies, but she was definitely old school. Mr Taylor was the teacher in the next year and he was a lot more laid back. At some point we had a guitar playing young man-probably a student. I remember him singing the Streets of London song by Ralph McTell to us. I think the girl in the background of the picture must be a student too.

Pretty cute kiddo! All of this post made me laugh except the dead people part.Young thang, if you were ten , and that was 45 years ago, that makes you younger than springtime.

I love old photos, so many memories if you can remember the people in them. It was 1963 when I was in Grade six.

I'm so glad you labeled everyone! I would never have been able to figure out who was who. Love those '70s fashions.

LOL--I have to go with your brother---you ARE a cutie,
and I say this with love and laughter,
but you do rather look like the girl in The Ring here...
--of course it was just bad photography luck of the moment. :)