Orange, Treasure in the Attic (Loft) and New Journal

Orange is such a cheering colour, and I love to use it. My favourite jumper is orange-two different shades. A charity shop bargain which it is hardly ever cold enough to wear. Doll painting has stopped over the last two weeks, due to tiredness and clearing chaos. I have now tidied my art desk again, and it is all set to go with my next painting which I started before the chaos. In the meanwhile, I have been using my Brusho paints, as I took them to school this week to use with Reception. They had a wet piece of paper and sprinkled the Brusho powder onto it from the pot where I had made a hole with a pin. They loved it, and it made me want to use them again. Lots of drippy, spritzed experiments, and two little foxes. I also coloured the layout picture for the painting after the current one is done. I had this doll from Linda Sue sitting on the bench with some others, and the robins were on there too before they went on the fir branch. The colours just looked so lovely together, then this title came to me so that is who she is. A bit like her former guardian who is a lady who looks after all the animals. I prefer the righthand version. I have painted the Paynes Grey background already. 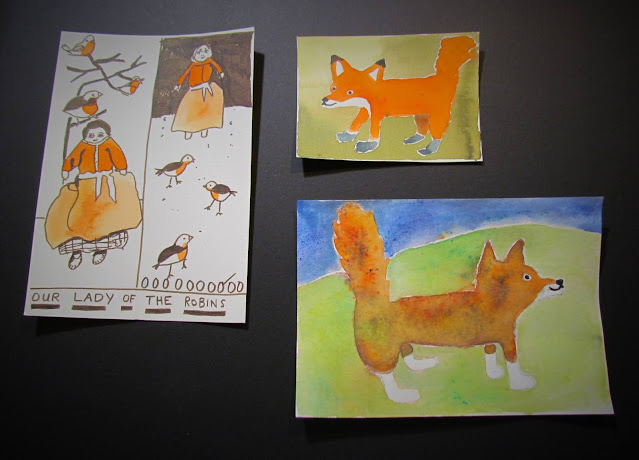 I have quite a collection of lacquer boxes, in all states of repair. They are really beautiful things, and useful too. I don't see them very often, so when I saw this lovely rusty orange one yesterday, I had to bring it home. For only £4 it was a bargain. I had just been to the post office, posting hopefully my last Christmas parcel, and some cards, and the charity shop is temptingly next door.

Below is the loft treasure. My Mum's loft had all sorts of things in it, all pretty well arranged, and It took me about three visits to clear it and sort it, possibly more. This is part of an old bedspread that I think I remember. There was this colour, then a purple one too. A couple of them were whole. This is part of one that wasn't. They were being used as lagging and insulation. I had to crawl between the rafters to retrieve them. This phoenix like bird makes a good cover for this little book. 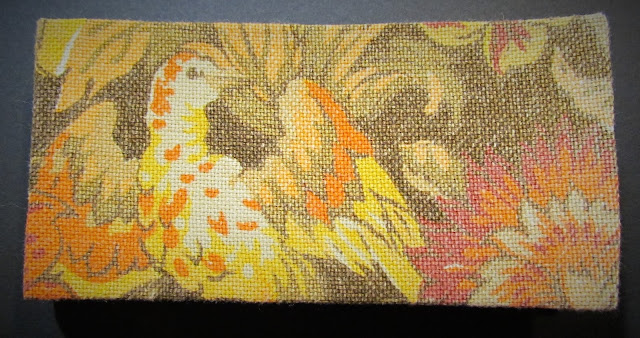 The paper was from Mum's stash of craft things.

Below is my latest journal which I have just started. It is in a book called 'Mrs Galbraith's Air', which I bought for the cover, already used on another journal. 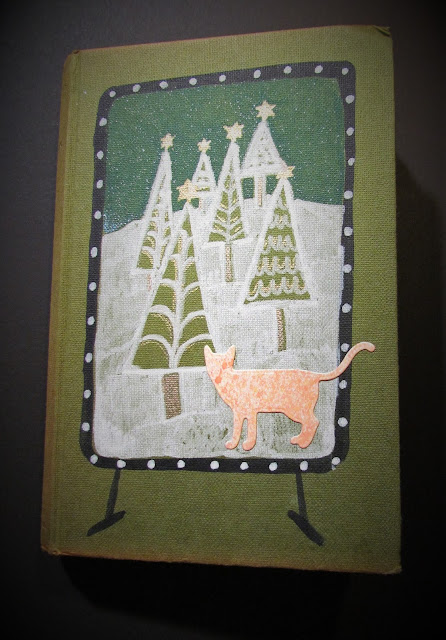 A kind of wintery, Christmassy cover, with a cat I found in a bag of cats I had left over from making my Aunt Vera's 80th birthday card a few years ago. She was my Mum's sister. 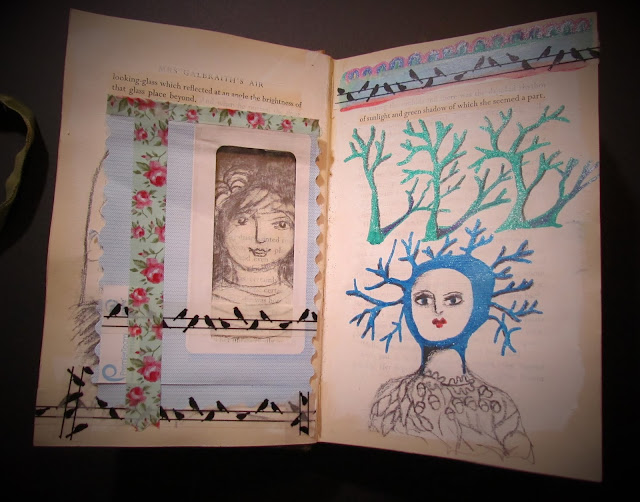 Above is an attempted interpretation of the pieces of text I left visible. The shiny paint pens are lovely, but took about two days to dry on the gessoed surface! 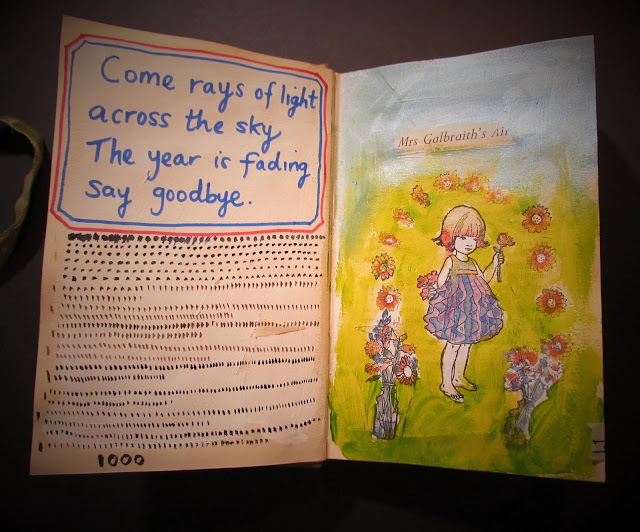 I love this quote. I heard it on an advert-it is from a song I didn't know and I thought it was beautiful.

I had a vague idea in my head of making a painting or drawing with just one mark for all the people who have died from Covid here. I experimented on this page. The enormity of the numbers is hard to comprehend, and I wanted a physical representation of some kind. Each day the total number of deaths is announced and I know the news readers don't mean it to be, but it comes across as almost cursory now. Every day I think of all the people coping with their loss and how the lost become a number. Each Friday I write down the figures-the new cases, weekly average new cases, hospital admission average, daily deaths and total deaths. I am doing it to keep some kind of a track in my mind that does not rely on what the news tells me is the trend. 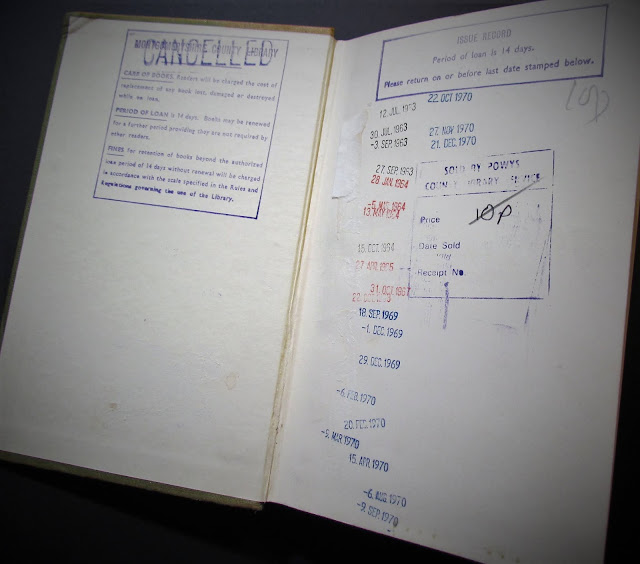 I love the page of library stamps, and also see that I bought it for 10p. Cheap!
Posted by Sarah at 13:36

I love that beautiful fabric from your mom's loft. What a beautiful find! Your posts are always full of such beauty and creativity. And YES, I love the library stamps too!

I like orange as well, and yet I don't have any orange clothing or orange furnishings. I wonder why?

Orange has been one of my favorite colors this year , and vermillion and bright yellow. Cheerful colors! Loving your journal, Too. Especially! Lucky find from the post office charity shop next door! Who could resist, not you! It is so cold in our house I have not been able to paint little things, I need to add more layers. I will be sending something orange to you after Christmas.And what Steve said. yes to all of it.

So much to love and comment on here!
Orange + Blue is my favorite color combo, like oranges in a blue bowl,
but orange alone is pretty swell too.

The Madelines' hair is really sort of orange, don't you think?

Brusho? I looked it up and I don't know if we have that sort of paint powder sold here in the US... Looks like fun!

The phoenix fabric feels just right for the times to me--I'd just posted a mural of a Phoenix rising from the ashes, and the girlettes dressed up as the Firebird (same thing) last year---
In a season of loss, does it help to remember some things may rise afresh from the ashes?

Or, what the heck---it's just a beautiful bird!
And yet... you literally did give it another life---rescued from being insulation!

I wish I could give you a house and all the cool old things that don't sell at the thrift store---you would spin treasure out of them all,
...like Mrs Galbraith's Air.