Angel chimes from my friend in Holland a few years ago (the small ones) and from Mum's. I realise that Mum's ones are going around backwards so need to twist the sails. I have mixed the Christmas things I kept from her house (a small selection-she had lots of Christmas things) in with mine and it is comforting to have them there. I am trying to enjoy the things about Christmas that I love and think about how Mum always enjoyed it and made it so special. The day itself will just be Andy and I here. I had cat sitting jobs as normal until Sunday when the new measures were announced, and they all cancelled, apart from the owners of Barney, a new client who I visited for the first time today. He is sweet and entertaining. After seeing him, I spent the next two hours returning keys I had collected last week. But I am glad not to have to go anywhere, and will think about Mum and try to enjoy it as she would have wanted that. Andy and I are going to go for a walk to the river if the tides are right. My brother was going to visit us on Boxing Day, but can't now which is a shame. Things seem suddenly to have gone from bad to worse. The tier four is basically lockdown, Brexit with no deal (so far) is looming, lorries are queueing up in Kent, unable to get to the continent because of the new 'mutant' strain of Corona virus, and 40 countries have banned travellers from the UK. My mince pie consumption has grown exponentially in response to all of this. I also bought a chocolate yule log cake today. Oh dear. 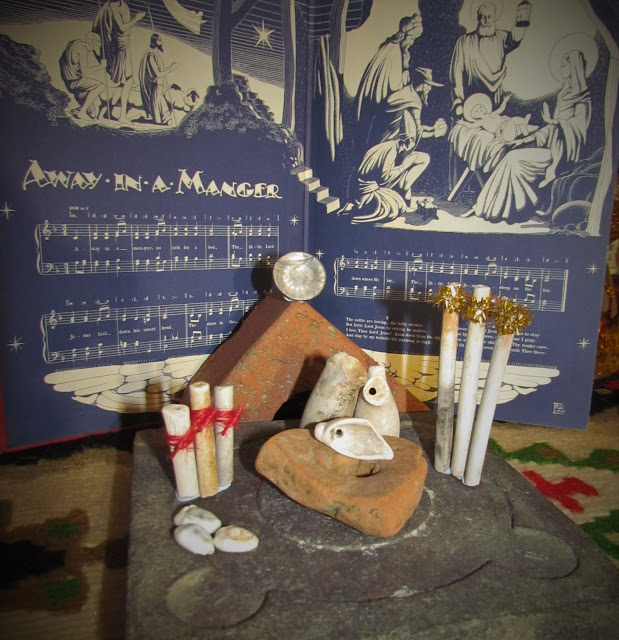 When stressed, creating something is always a good distraction, so here are this week's creations.
Steve shared some minimalist nativities on Facebook and it inspired me to try one, then two of my own. Pipe stems and bowls, and some cowrie shells make up the first, and a magnet toy that I found during recent tidying made the second. Fresca made one today out of household stuff which works well. 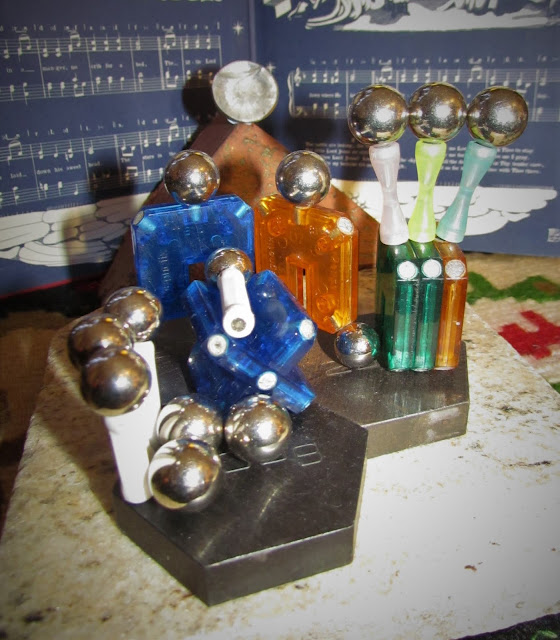 This little dumpling is from Linda Sue. I do wish that I could find out who made some of my dolls. I wonder if this person made up the pattern. She is just such a little character. 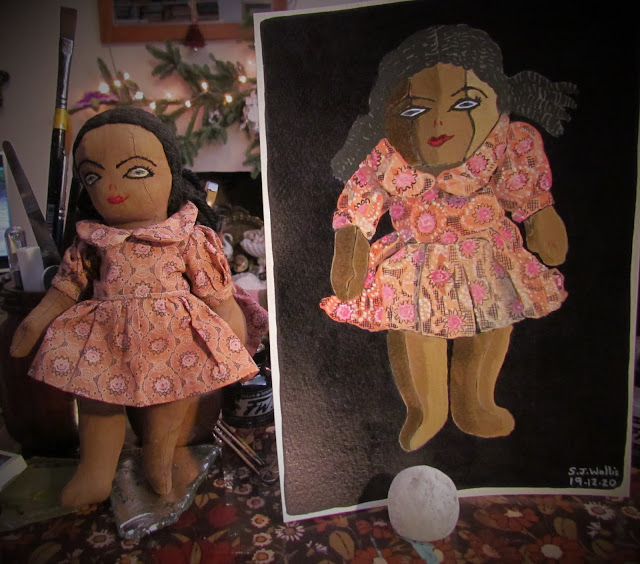 As usual, I really enjoyed painting the pattern on the dress. It was a puzzle, and I had to start again a few times. Now I have started the Robin lady one. 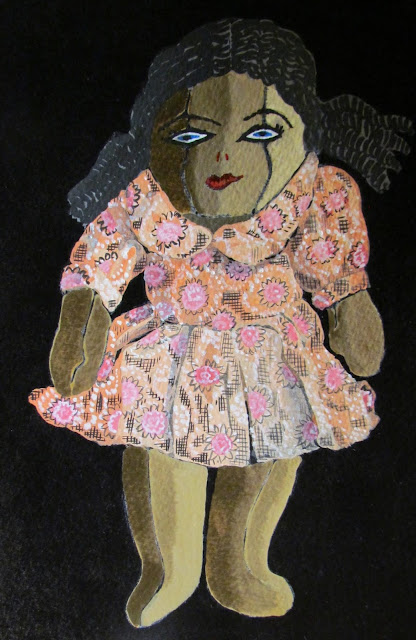 Probably more mince pies and Christmas stuff tomorrow! One more thing-Lara Maiklem, the London Mudlark, shared the Alexander McQueen video, for their Spring/Summer 2021 collection. She was sharing it because it was filmed on the Thames foreshore, and it was along the lines of, 'I wonder if they know what they are sitting in?' I read all the comments on her post after watching the video, and because it was a bunch of Mudlarks, they were a bit dismissive of the video, and how the Thames mud was filthy etc. But one of them used to work in television or films, and said that the section where the girl made a mud angel was probably filmed either in green screen, or at least they would have put a cloth down with some imitation mud on it. There is also a part where two of the models are walking along thigh deep in the water, which would not be a sensible thing to do, and the person was talking about how that may be green screen too as risk assessments would not allow that. Anyway, despite all the mudlark carping, I was pleased she shared it, as it is mesmerising. The soundtrack is made up of strange noises, whistles and clicks-they sound a little like starlings, and the characters are dream like figures on the foreshore, with lots of possible little stories to show or tell. I loved it! It is called 'First Light'. Jonathan Glazer is the film maker and he made 'Under the Skin', which is from a book of the same name by Michel Faber. I loved the book, and the film too. It evokes the atmosphere of the book really well I think.

I really like "first Light", thanks for posting that beautiful piece. I hope you are right about the mud angel. That mud really looked delicious. I so love your doll paintings, they are all wonderful. This one is such a little weirdo isn't she. Great job on the dress.
I am thinking of you and your Mum and will do forever more. Thank you so much,
Sarah, for allowing me to have time with her, I really love her, as you know. Such a difficult Christmas- we will have a proper one next year! I am jealous of your mince pies, We have NONE!! How can that be? Thinking of you- love

Oh also- BRILLIANT nativity scenes! I LOVE them and i did laugh.

I love your Nativity scenes. I also love the dress on that pretty doll, reminds me I have several ideas for clothes to make for my Meg. I haven't made any mince pies this year, I just know I will eat far too many if I do.

Oh, the trio is pipe BOWLS... of course.
We don't have those here in the Midwest US--I only know of them from "Detectorists", which is one of my favortite TV shows of all time.


I like the tenderness of the pipes, but the magnets are magnificently minimal!
Shiny!

Your doll portraits are AMAZING!
(I'll write you a personal note about Racer...)
They are an art form unto themselves.
Have you always painted them like this, or are they new this year?

I am gently sad for your Christmas without your mum, and gently happy for how you carry on her love of Christmas.

P.S. Thanks for mentioning the London Mudlark--I didn't know of her---I just ordered her book for my friend bink, who has always wanted to dig in the Thames shore.
(I might prefer to sit up above somewhere and watch... The mud looks scary to me--not because it's dirty, but because it's slippery and I am a wimp that way.)

Thanks Linda Sue. My Mum loved you too. She often talked about that day.
Thanks River. I look forward to seeing your dresses!
Thanks Fresca. I follow an artist on YouTube called Natasha Newton. She lives somewhere in Surrey I think, in a big house owned by her parents in law. She paints landscapes and birds, and has a very distinctive style. One of her painting videos had how she prepares, and although she sometimes works on black paper, mainly she paints her dark background and works on that. So that gave me the idea about the backgrounds. She uses Payne's Grey. I have been using my acrylic inks which I prefer to acrylics themselves as they are fluid, and you can just put as much or as little as you need more easily. I have been using Payne's Grey for the background, and I really enjoy the process of building up the colour on top of it, and leaving some little dark outlines. It can take quite a few layers, depending on the colour of the paint. So, it is something I have started this year.

And also, thanks for your Christmas card letter, I loved the masked bear! And I am glad Racer has arrived!

I love your nativities! Especially the one made from the pipe stems. Walking thigh-deep in the Thames does NOT sound advisable! I'm sure the lawyers would have intervened!