Views from a Height, Loss of Control, Journal Pages, Cake and a Cat

On Monday I was at a school in New Cross. I walked up the hill to the end of the road at lunchtime, and found Telegraph Hill. It used to be known as Plowed Garlic Hill. The name 'Telegraph Hill' came from a semaphore telegraph station built on the hill around 1795. Housing was constructed in the area in the late 19th century and the park was opened to the public in 1895. (All this from Wikipedia) 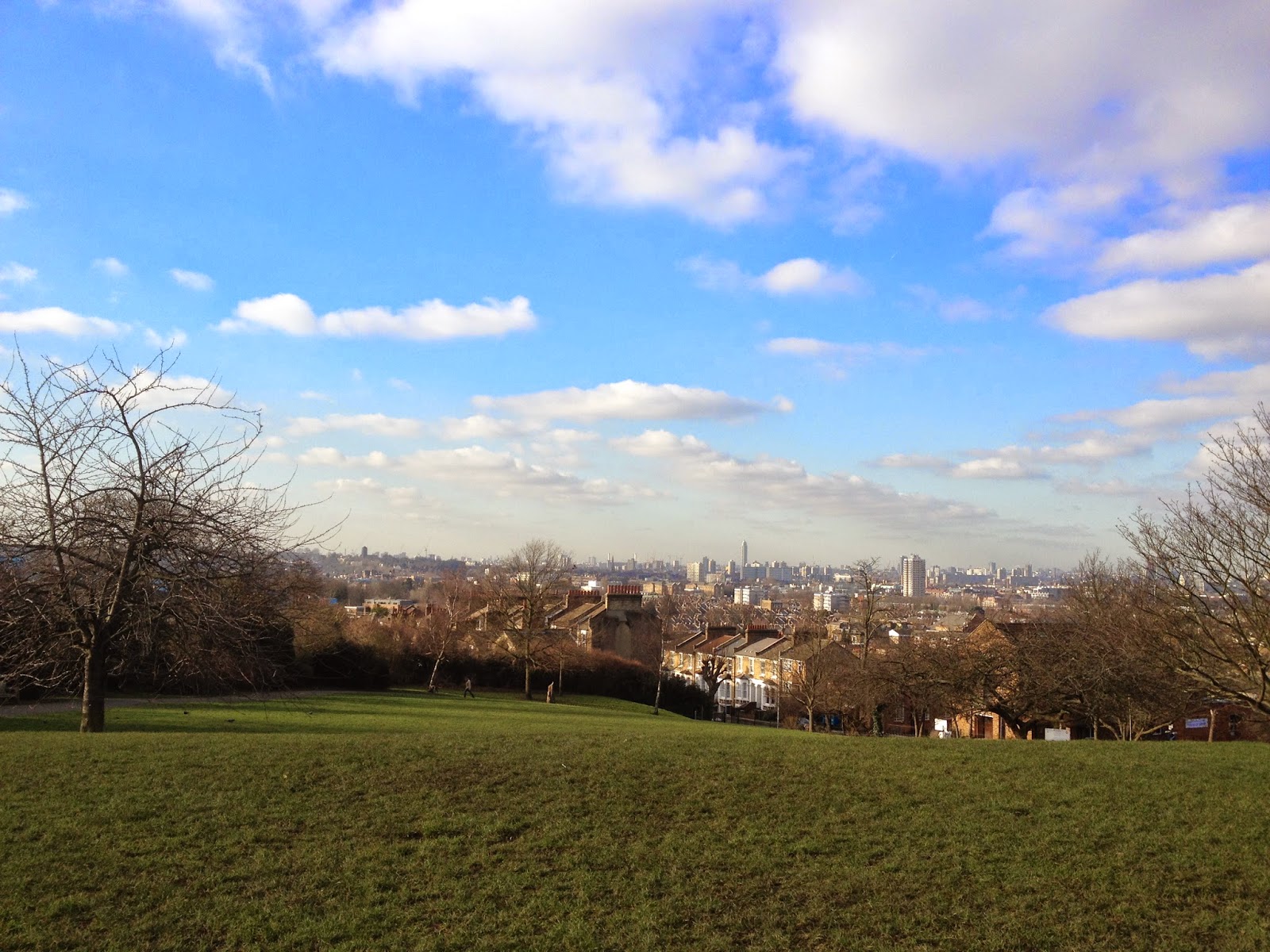 I pushed on to the very top, and was at first disappointed that houses blocked my view. Then I turned around and saw it! 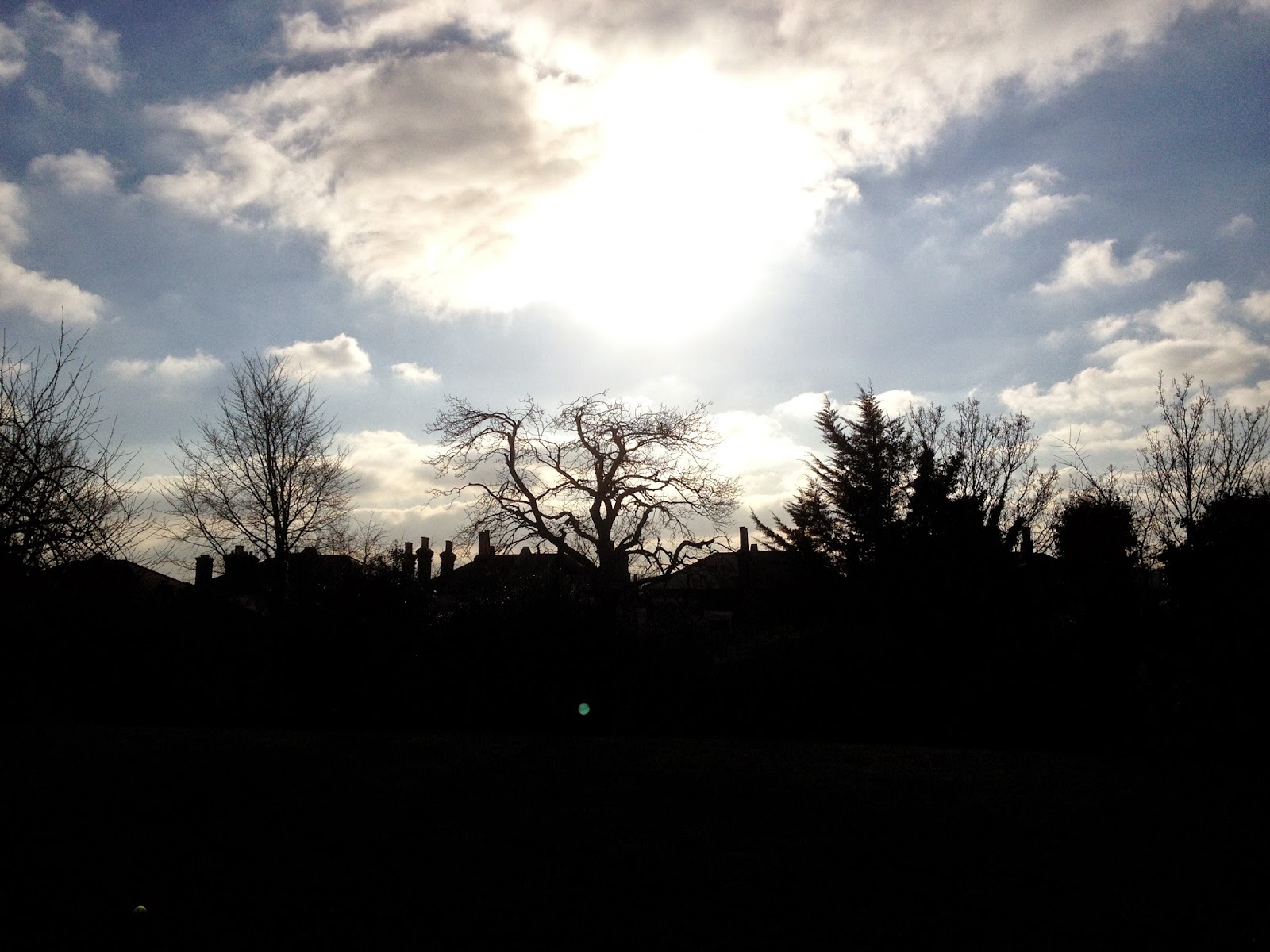 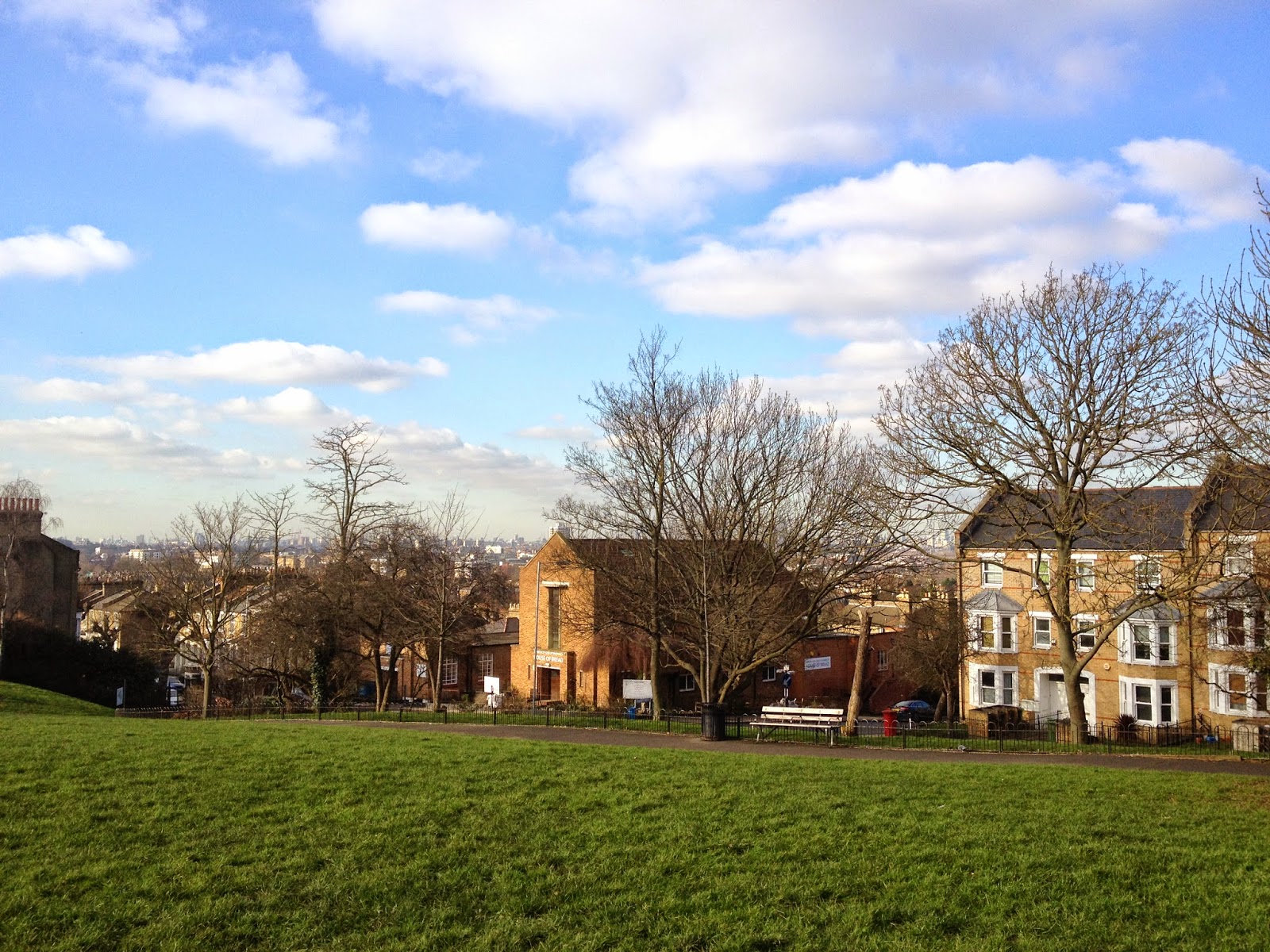 Lunchtime was the best part of Monday. The class I was in was nice but the day felt chaotic and it left me feeling a bit grouchy. 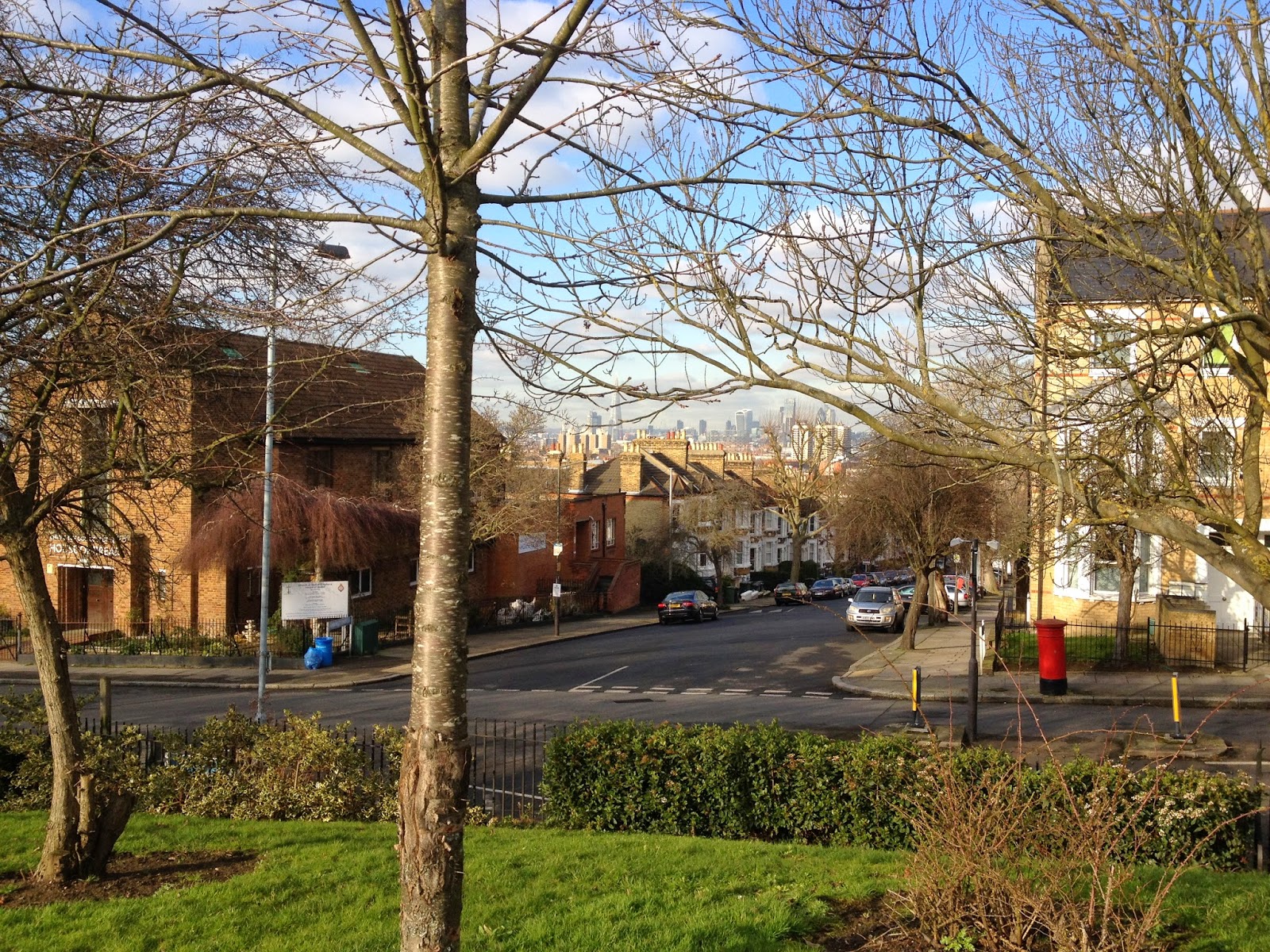 Tuesday is now a regular day, teaching Year 2 in a school just down the road. Last week I taught five different lessons, and had the associated marking to do. I was there until nearly six and had to take some work home. Unheard of for a supply! I liked it though. The people are nice and so are the kids so I will stick at it. This week I was back. I will do year 2 on Tuesdays for a while and then Reception and Nursery on Wednesdays. It is great to be able to pop home at lunchtime. The school is in a massive red brick building which has great views across East London. This was taken from the staff room yesterday morning. 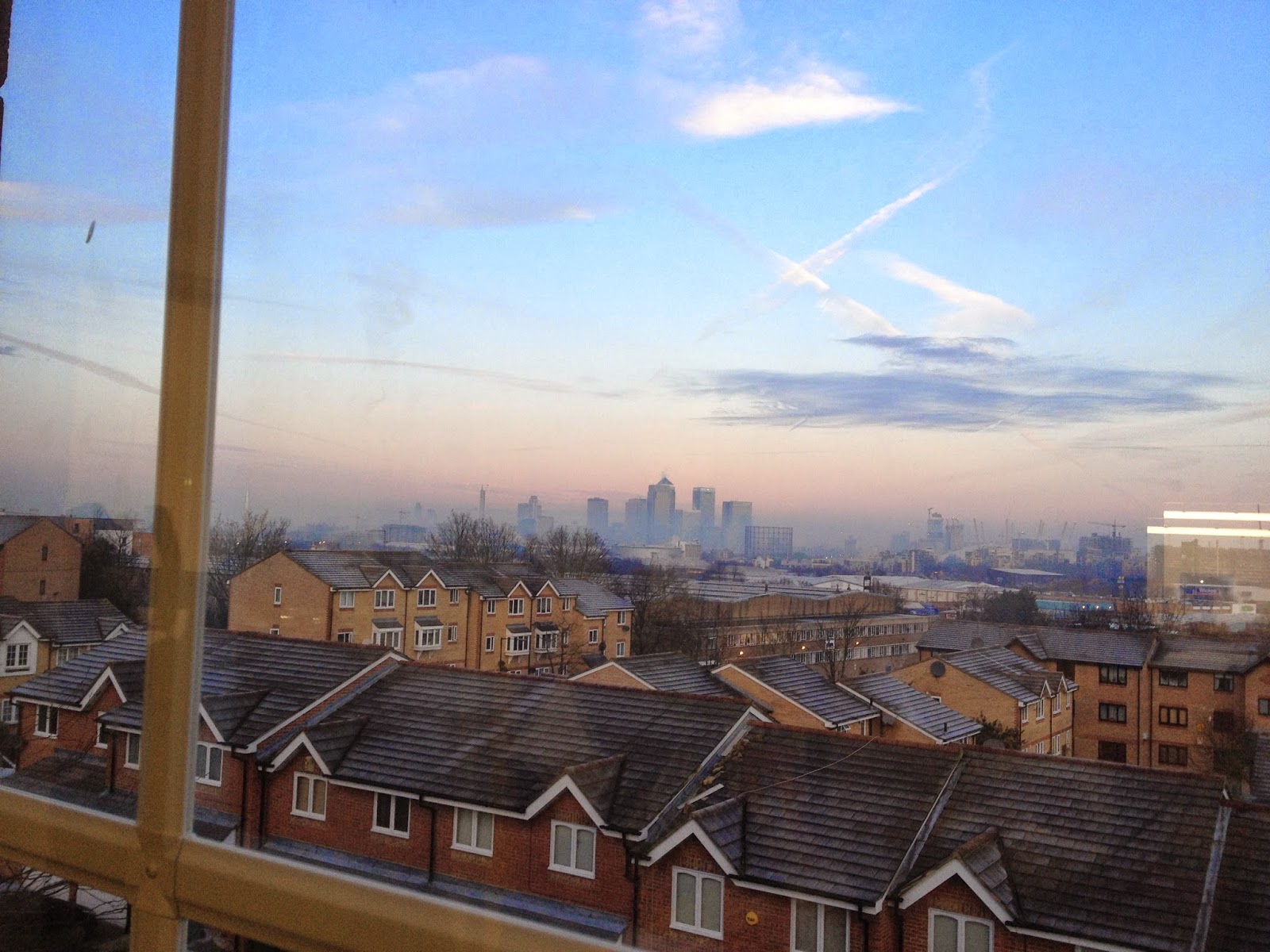 The loss of control came last night and involved my car. I decided to drive to Hobbycraft after school to get some more crochet hooks. In Golden time on Fridays I am teaching some children how to crochet. Last week they made finger chains. I need more big hooks.
I got as far as the big roundabout in Woolwich. I was driving around to the right, whilst changing lanes from the middle to the left when suddenly I had no control over the steering. It was a horrible feeling. I reacted by wrenching the wheel from side to side to no effect (it felt like nothing was there) and presumably slamming my foot on the brake (all the time thinking 'I'm crashing, I'm crashing'-shouty thinking!). This caused me to do a big U-turn and hit the central curb of the roundabout with my left front and rear wheels. I re-started the car and drove it up onto the grass. I couldn't believe that I had managed to not hurt myself, crash into anything hard or hit any other cars. None of the cars behind me were very close, there was nothing in front and nothing to the side of me. I was lucky! What I thought had happened was either a burst tyre or something to do with the steering. My left rear wheel was damaged and the tyre flat. What the AA man who came to my rescue thought had happened was that I hit a patch of oil on the road and skidded. The damage was done when I hit the curb. How he actually described it on his form was that I 'slid onto curb'. It felt somewhat more dramatic than that! So, I skidded. I have read the advice on what to do when you skid. I even listened to some on the news this morning. What you need to know most though, is that you are skidding. I did not know that. I had no idea what was happening. Probably even if I had I would not have reacted correctly. It all seemed to happen very fast and I cannot imagine having the time to do the things you are supposed to before impact. 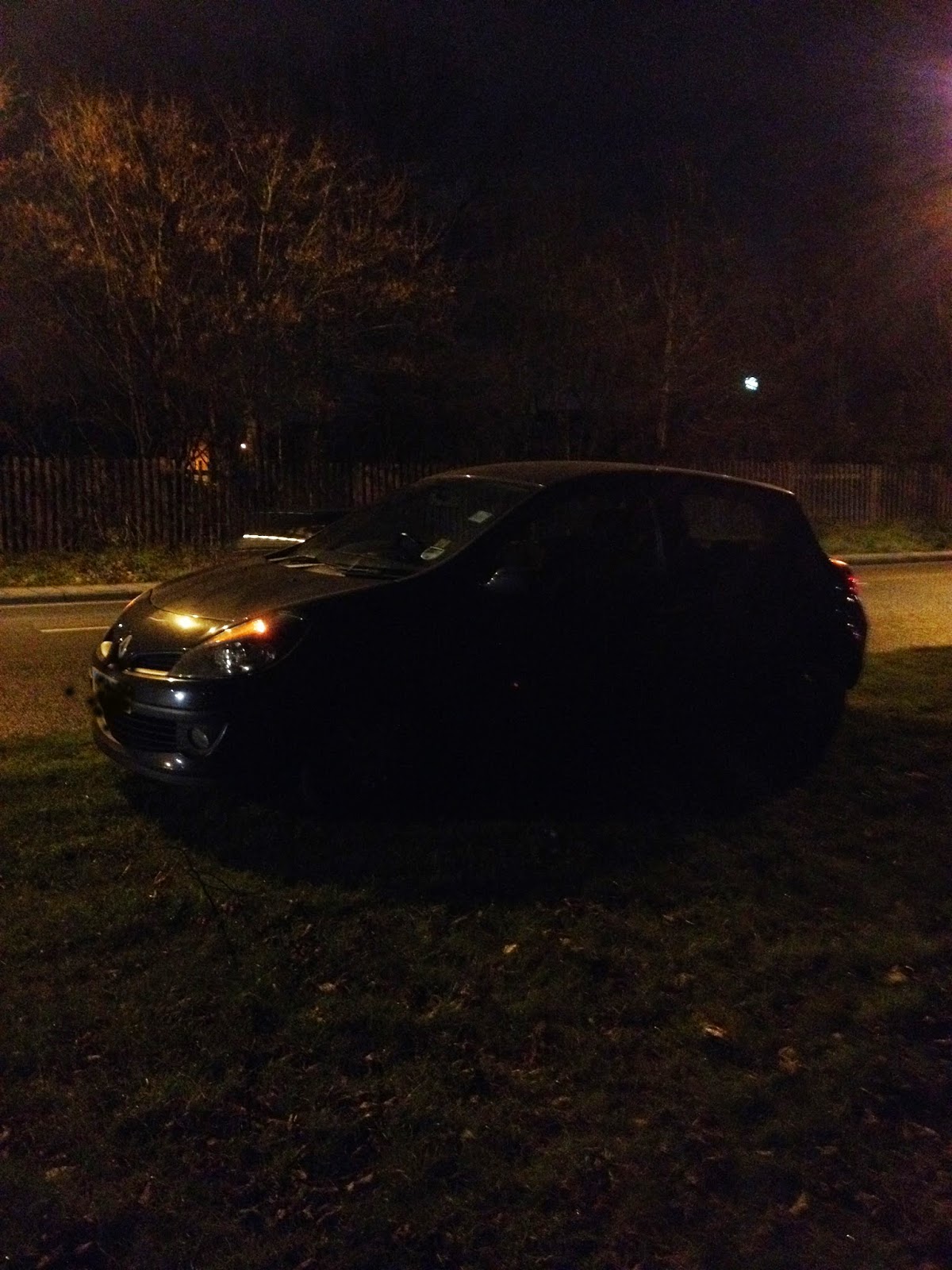 Poor car on the roundabout, facing the wrong way and with a broken wheel. It was freezing so I only stood outside for a while. The AA man checked it over and changed the wheel, and then I was able to drive home. At about 20 miles an hour all the way. I don't think I was going that fast around the roundabout but it must have been too fast. The car has gone to the garage today to have a proper check. 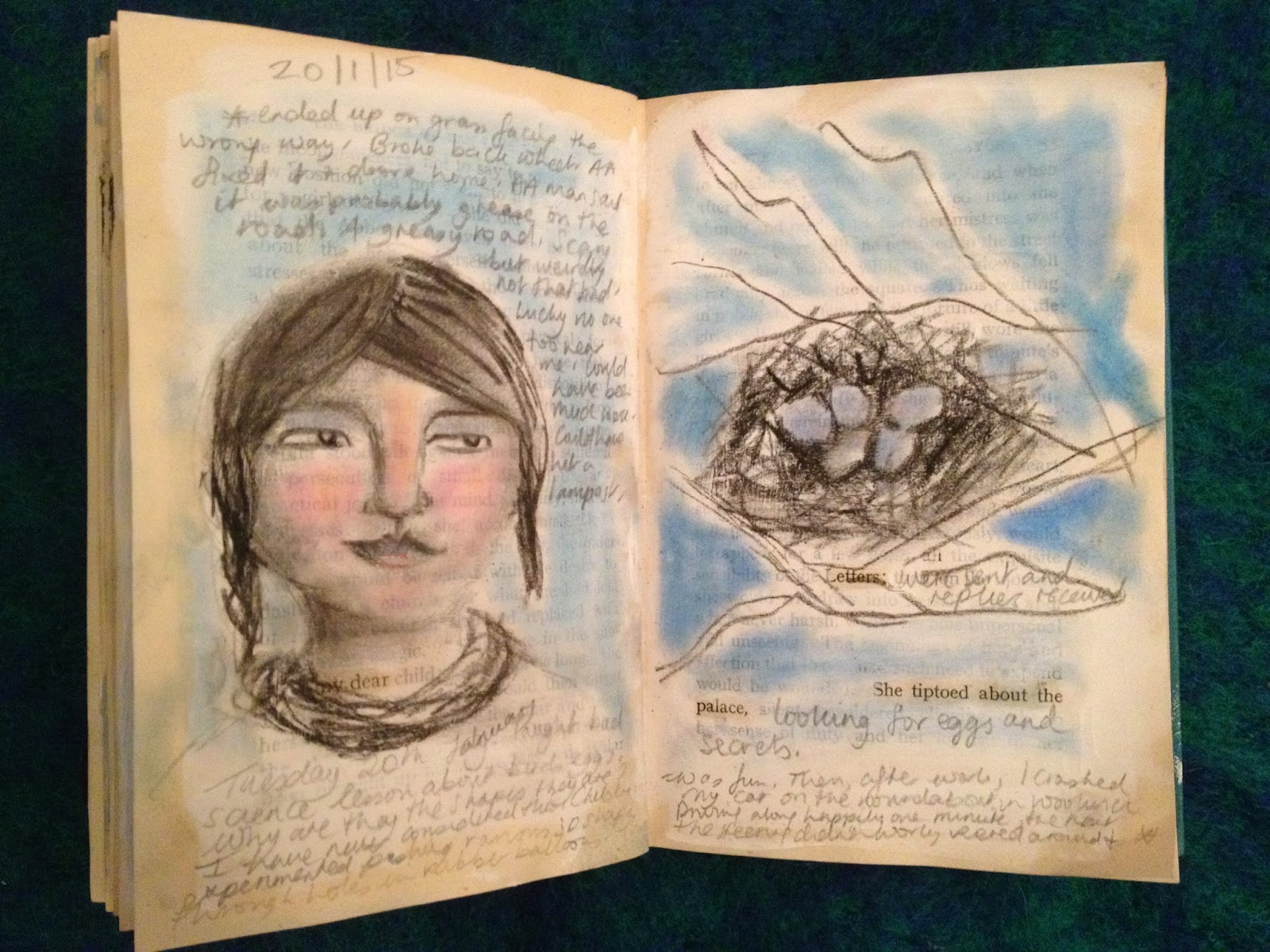 This is the page I did last night. Part of it is about the car, and the other half about a particularly bad science lesson I did with year two about eggs. Ah well, can't get it all right! 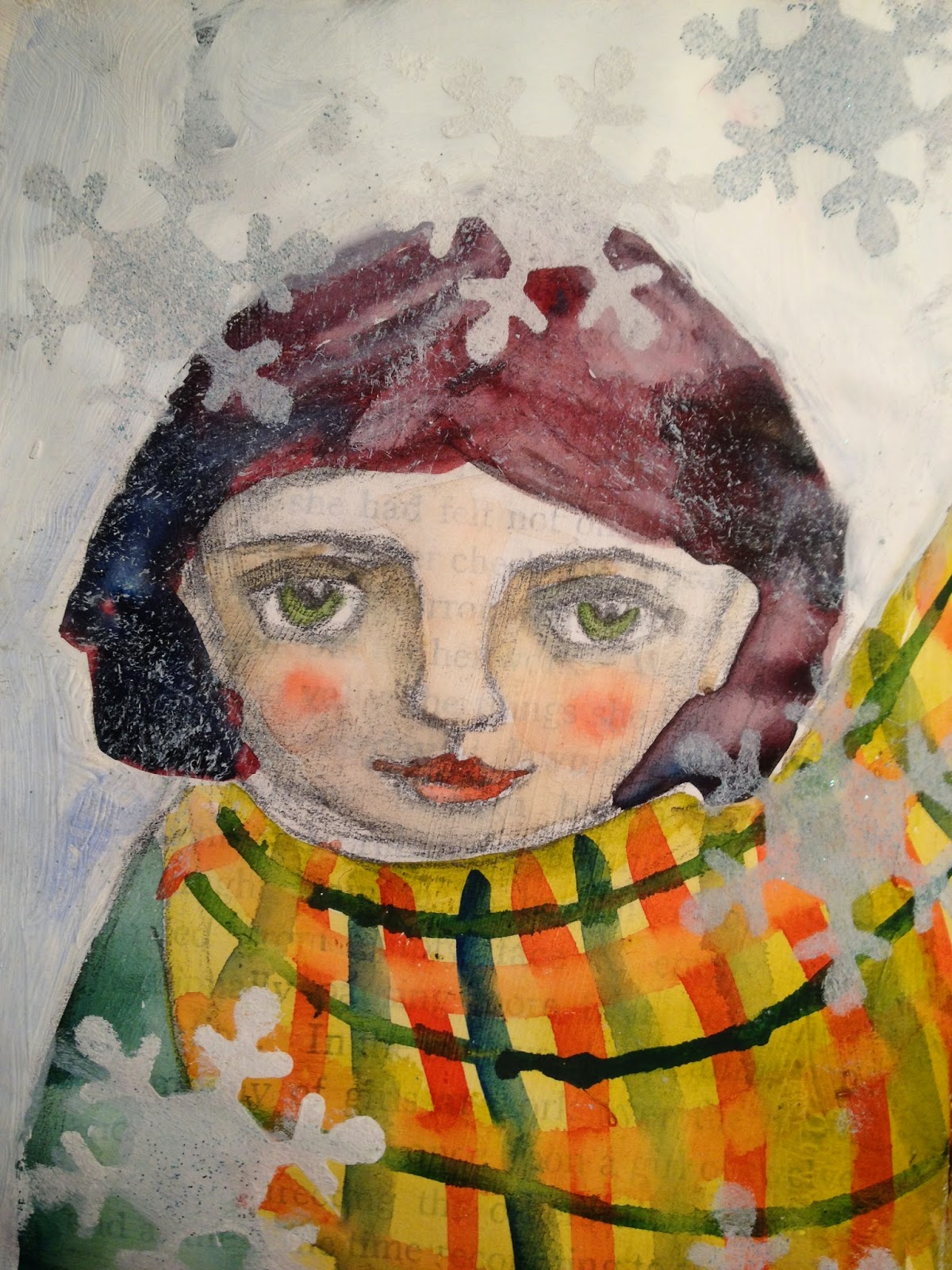 This is about wishing for snow. No show snow. If it does snow I won't be driving in it. 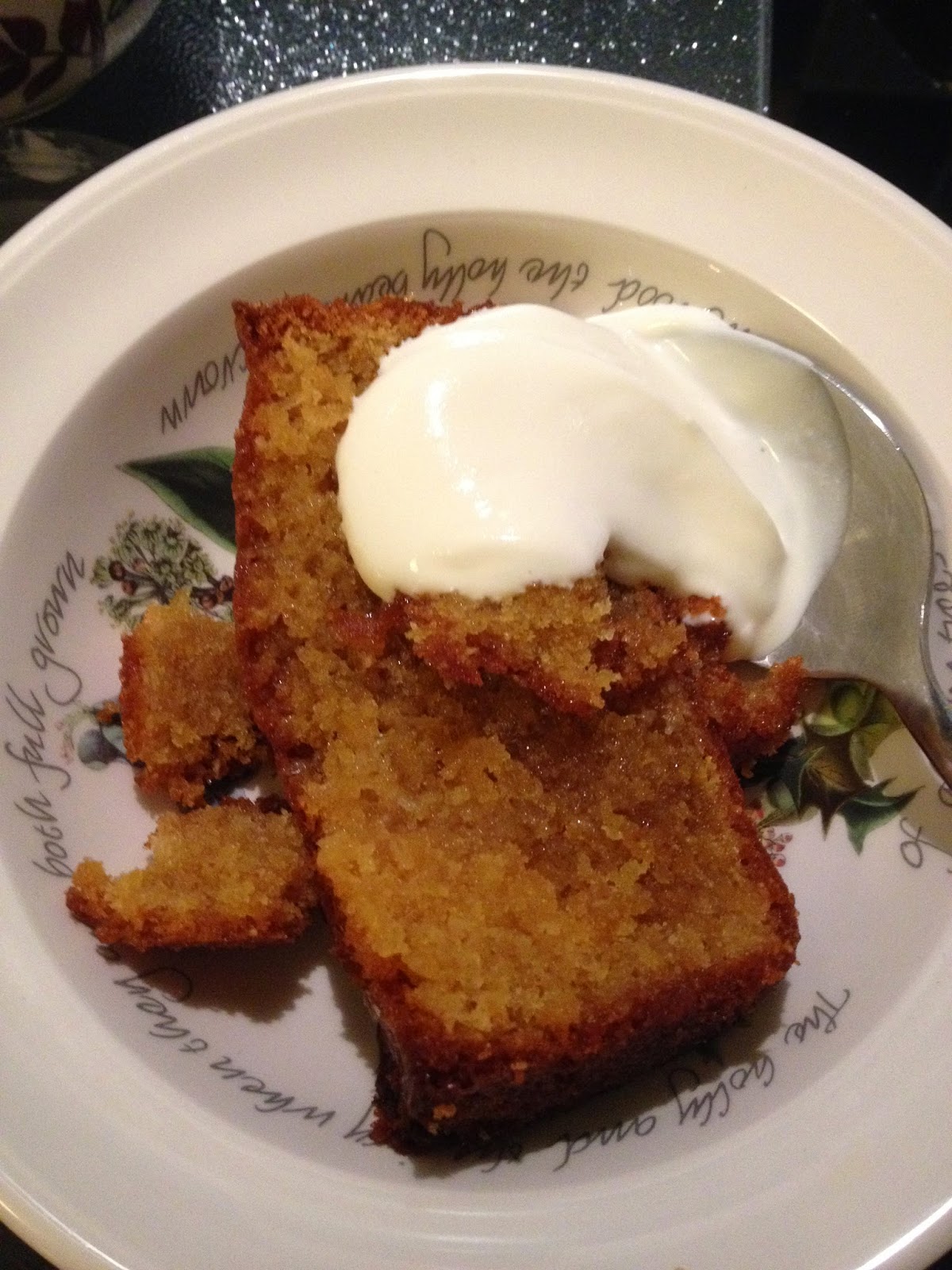 Lemon drizzle cake with soured cream. Delicious! Tonight I made lasagne and rice pudding. I don't know what has come over me! 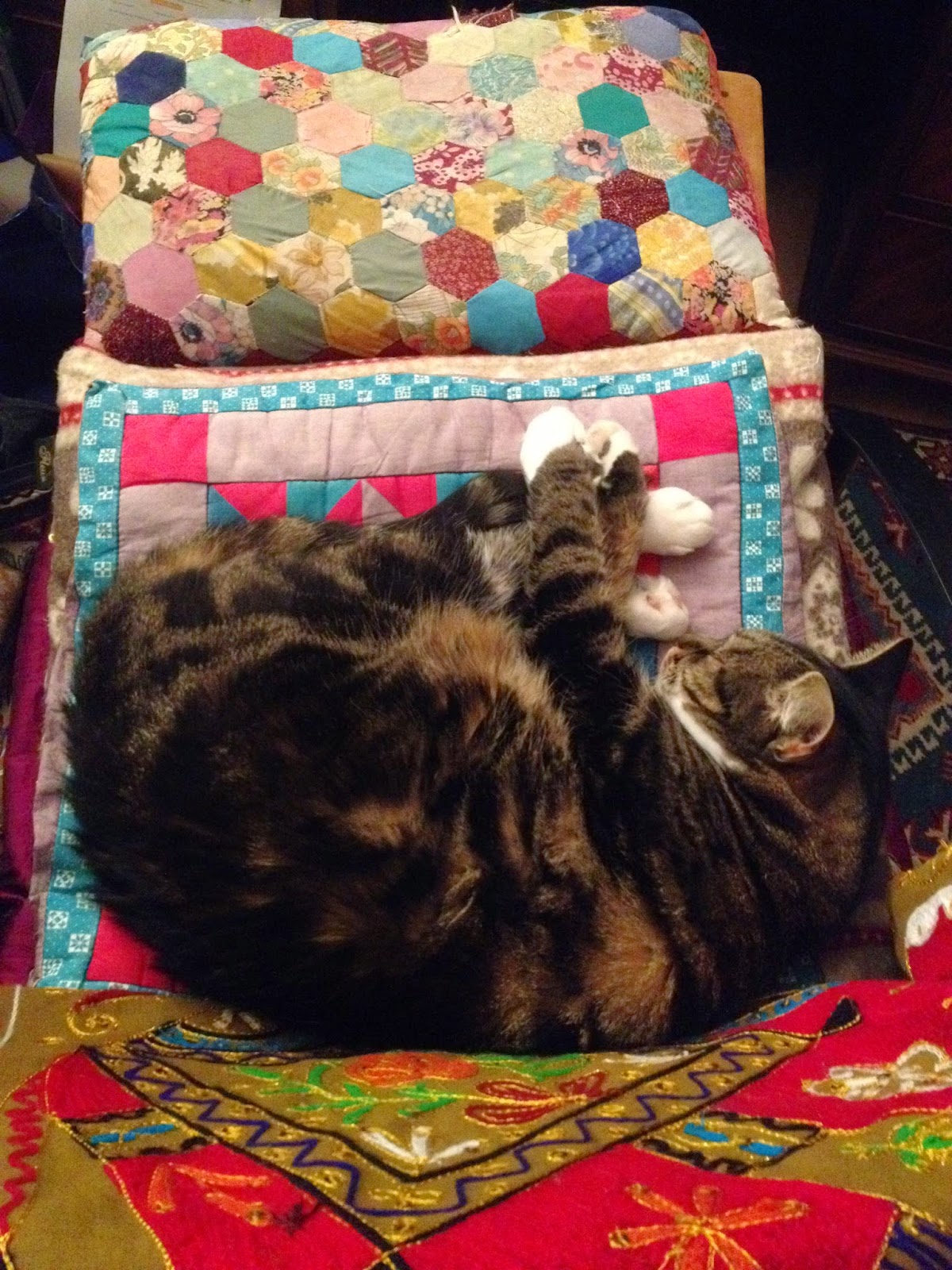 Cassie on the computer chair. She or Lily take it over, then I have to get the stool and sit in front of them to get on the computer,
Posted by Sarah at 15:04


That is so scary! Damn oil...cozy kitty, and fabulous artwork! Must be winter, I have been cooking, not as fancy as yours, mind you, but spending considerable time in the kitchen. Comfort food.

that cake looks so good...

Sarah, I'm glad that you are fine. Your skidding with your car sounds so scary. Oh, that cake look delish. I have to venture out and bake more cakes. I'm always baking cookies all the time.

I love that wintry view of Canary Wharf. So scary about your car! Glad the damage wasn't worse.