My Diwali story basket ready to take to school this morning. 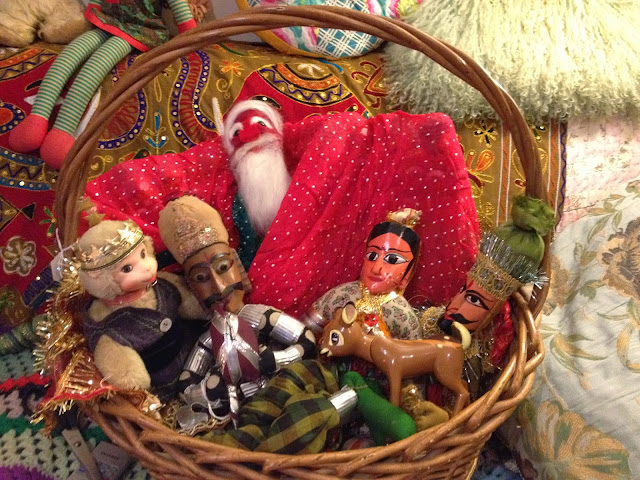 Once upon a time, there was a Prince called Rama. His wife was called Sita. Rama's father wanted him to be King, but his wife wanted her own son to be King first. So Rama and his wife had to go and live far away in the forest for fourteen years. Rama's brother Lakshman went with them.

The forest was beautiful. One day, a pretty deer ran past the house where Rama, Sita and Lakshman lived. Sita wanted to play with the deer so Rama and Lakshman went to catch it. They told Sita to stay in the house, and made a magic circle around it to protect her.

When they were gone, an old man came to the house asking for food and water. Sita felt sorry for him and let him in. Once inside the house, the old man changed into the ten headed demon Ravana! He took Sita away and flew to his island where he kept her prisoner. He wanted her to be his wife. 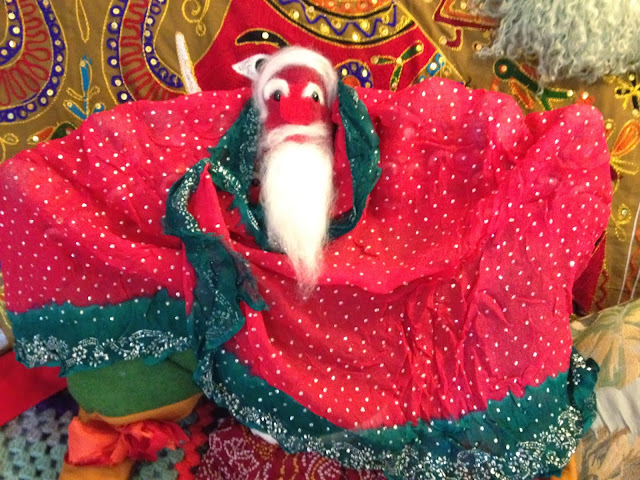 When Lakshman and Rama returned they found Sita gone. They called upon their friend Hanuman, the monkey god. He called his monkey army and they flew off around the land in search of Sita. Once they found her, there was a big fight. Ravana was killed and Sita was rescued. As it was night time, and very dark, all the people across the land lit a small candle. All these lights together helped Sita, Rama and Lakshman find their way home. They returned from the forest and Rama became king.


I love this story and Diwali is a great and pretty Hindu festival. The Festival of Lights. I usually tell the story with pictures but this year I couldn't find my resources. I wanted to make the characters but couldn't do so all in one weekend. Then I remembered my Indian dolls. I have had two of them for ages and one for a shorter time. They became Rama, Sita and Lakshman. The monkey God was easy and just needed a crown, waistcoat and belt. ( I made it a black belt because he is good at fighting!) The only part I changed in the story was the part about the demon being killed. He just got pushed out of the way. Having found most of the characters I decided to make Ravana. I used up lots of things and didn't have to buy anything. The joys of being a hoarder! The red fleece fabric was bought this summer in one of the American charity shops. (The best one in Lynden) The green felt was the perfect colour and size for the huge shoulders and slim waist I had in mind. The trousers are sari fabric I have had for ages and which was perfect. The shoes are an old pair of trainer socks which I never wore as they are the annoying kind that just end up inside your trainer halfway down your foot. The method of making the legs is based on the Indian dolls I already had. I think these dolls must be intended for story telling. They are made for effect and parts of them are very crude. The best part of them are the carved and painted wooden faces. Needle felting worked very well for the noses-a piece of felt stuffed with a little roving and needled felted on. The eyes are from my box of eyes. I had such fun making this doll!

Having looked through this post I realise you can't see his legs. So here is one more picture! 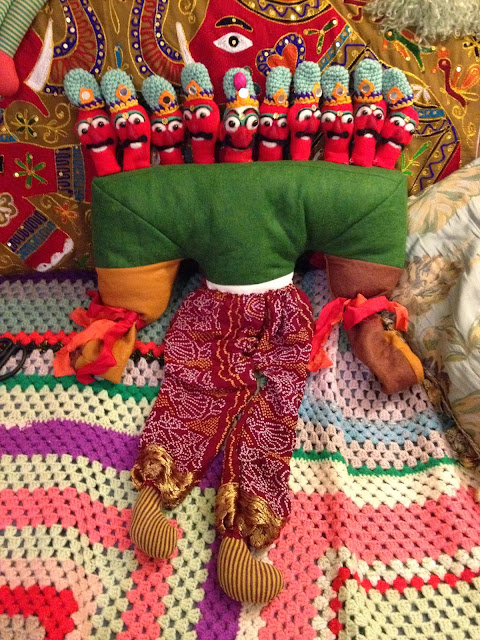 It is a really wonderful monkey god doll. I had to giggle about the banishing of the bad socks that end up in the middle of the foot.
Have a great day.
Always, Queenie

What lovely dolls! I bet the kids were fascinated by it all.

I'm a little late but, Happy Diwali! :o) I love this tradition/festival... And your dolls are WONDERFUL, Sarah! And must say, LOVE all the crochet about here too! :o) Happy Days ((HUGS))