A mixture of pictures with all sorts of subjects and no links except they are from today. We didn't go to Hastings in the end, as my friend felt it was too far and too hot. So we went to Rochester instead. 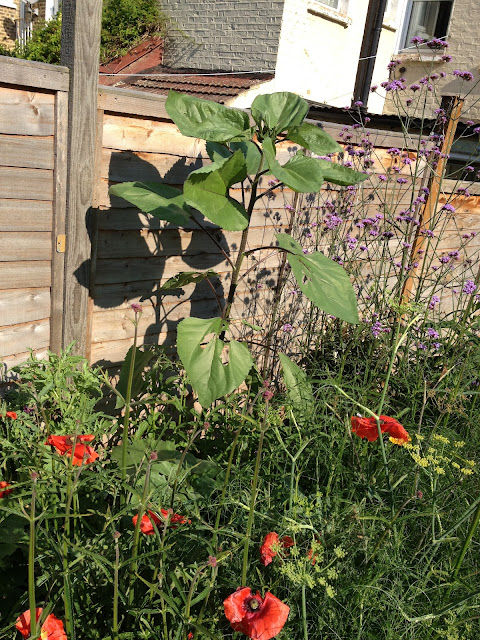 A tangle of poppies, verbena and fennel surround the one big sunflower that has survived the snails. Though I see they have had a little go at one of the leaves. 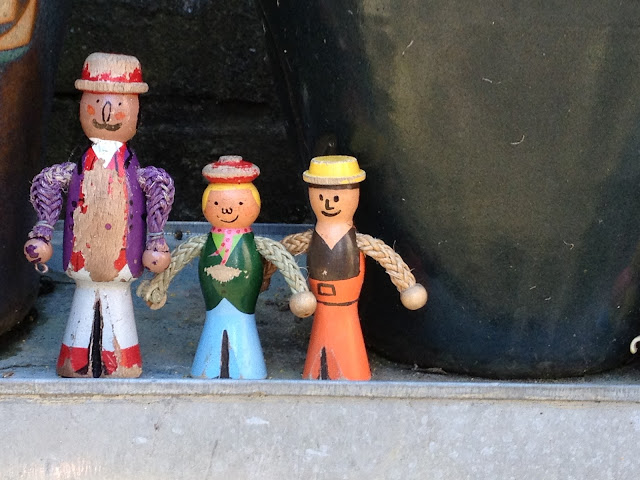 Small wooden people enjoying the sun. They may have to live more under cover if the rain returns. 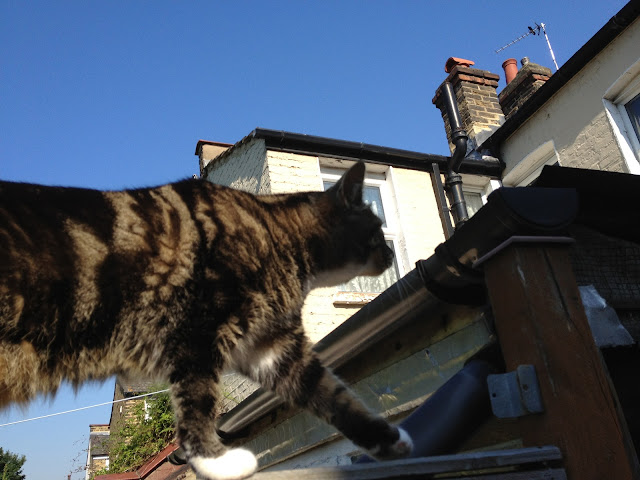 Cassie off to the roof. She loves it up there, prowling around and looking down on all of us. She jumps from the corner of the roof onto the decking, which makes a very big thump and does not look very safe at all. 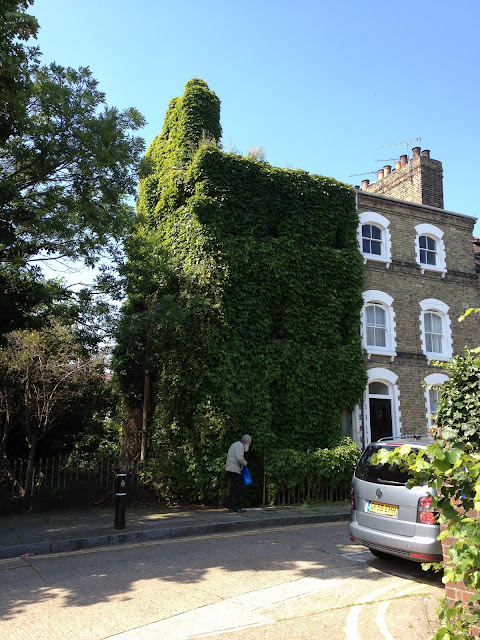 A man who could be Father Christmas holidaying in Rochester. The ivy covered house is amazing-almost like the ivy has eaten it. 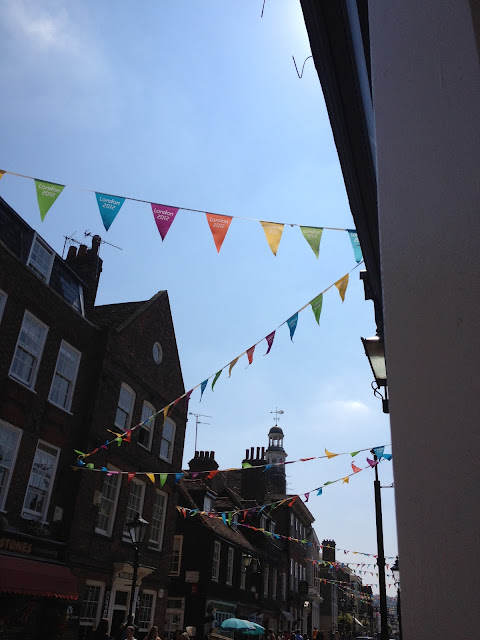 Rochester was extremely busy and we almost didn't find a parking place, even though we were there quite early. I guessed something must be going on, but it was only later that we realised there was a graduation ceremony at the cathedral, as lots of students in caps and gowns appeared. The Olympic bunting was looking pretty in the sun. 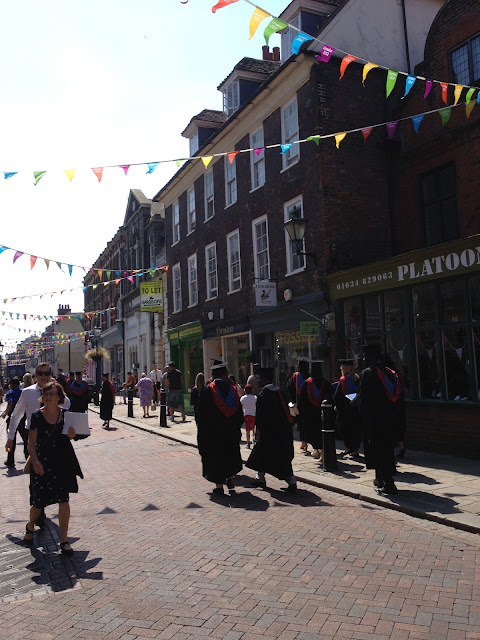 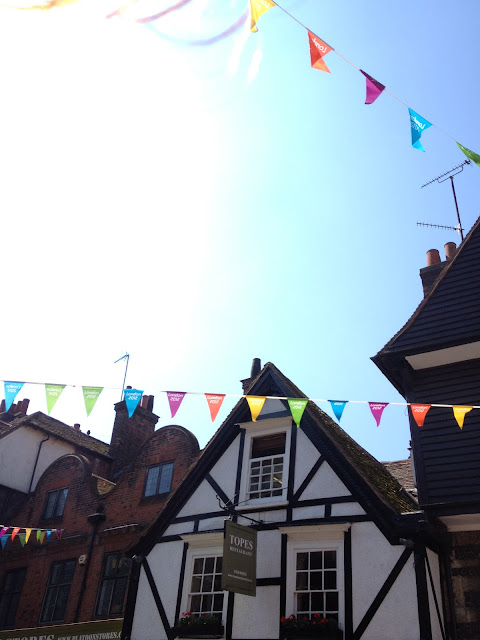 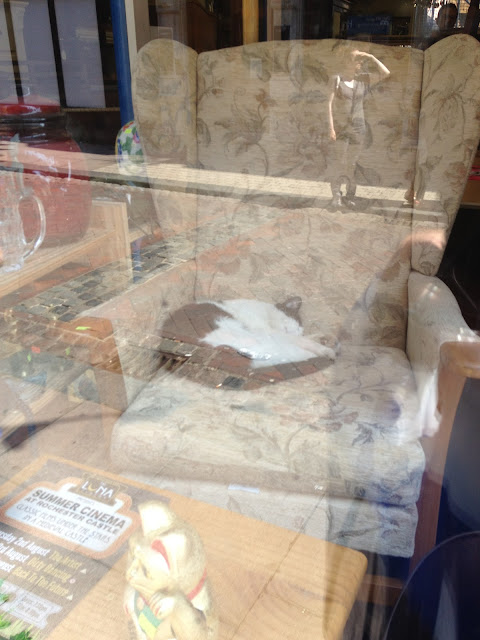 Two cats in a window. 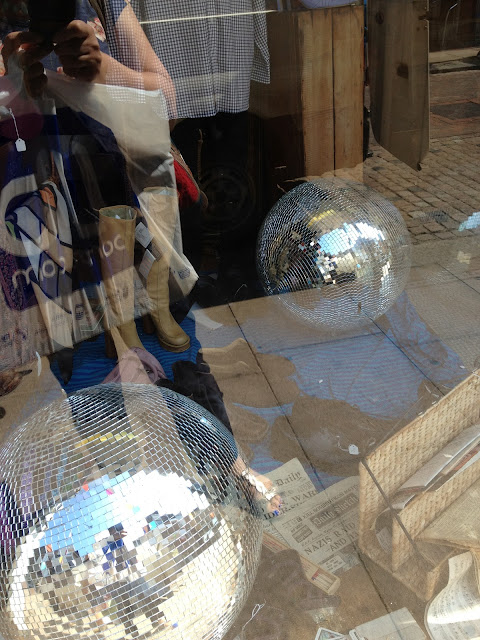 Two glitter balls in a window. 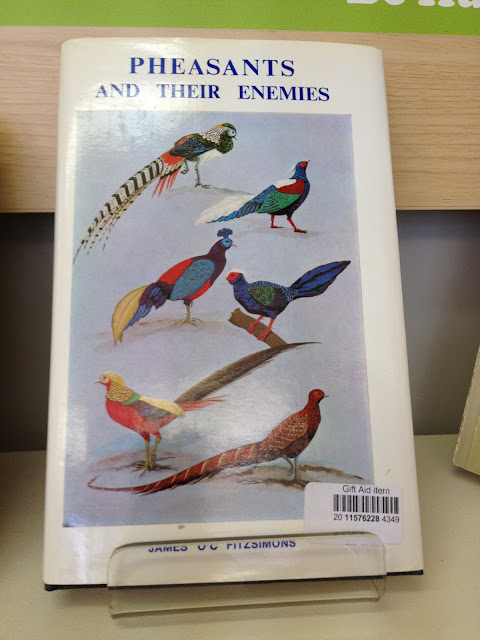 The title of this book tickled me with its anthropomorphic spin. 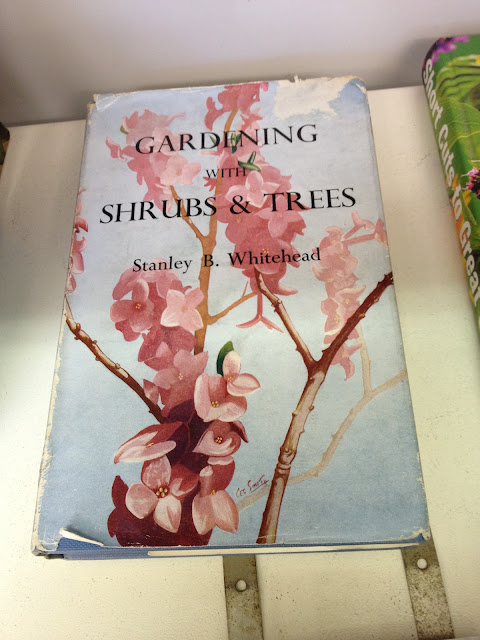 I liked the cover of this book, but restrained myself from buying it as it looked a bit dull. 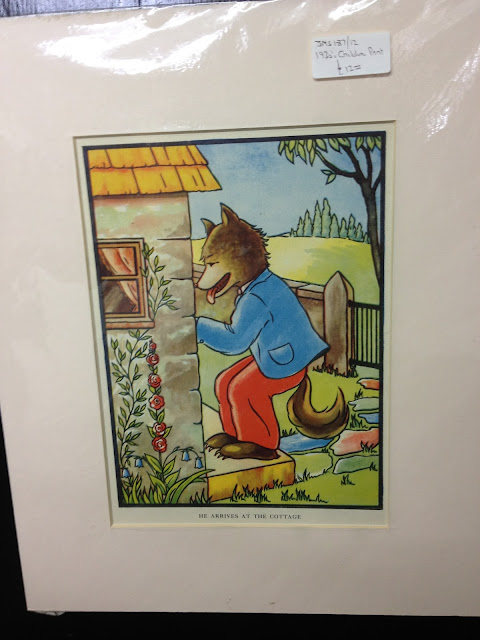 I also didn't buy these-£12! Too much. But I liked them! The wolf looks so jolly. Mr Wolf was the favourite baddy in my class this year. 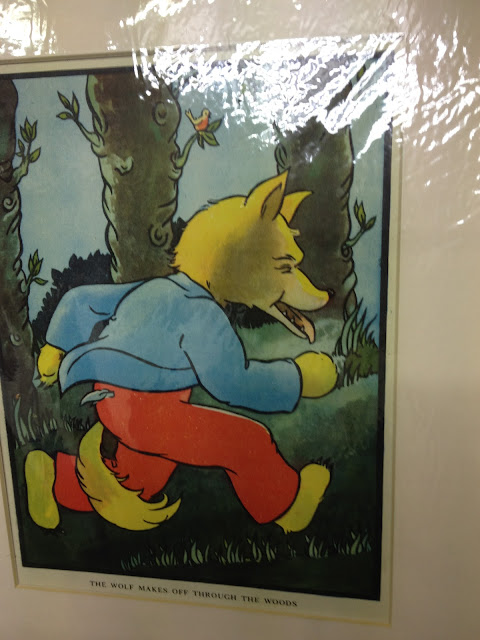 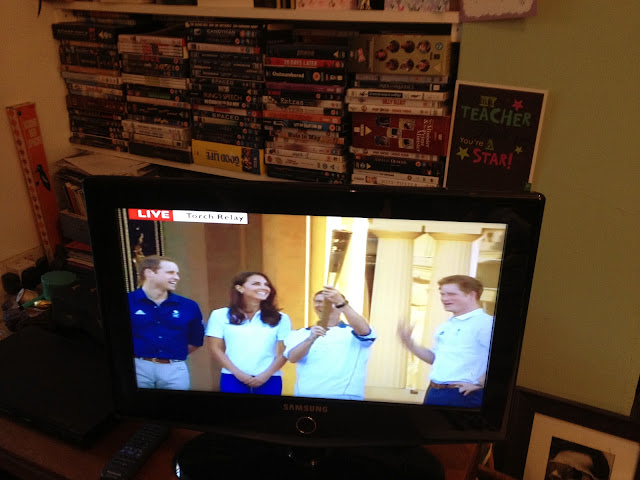 Torch bearer, torch and Royals.  The torch is nearly there, and the olympics are nearly here. Tomorrow we are staying in to watch the opening ceremony, then on Saturday we are going to our only event, the equestrian eventing in Greenwich park.

A recent journal page-my journals have been a bit sparse recently and have mainly turned more into sketch books. This is a moleskin book with watercolour paper-it is lovely! The drawing is of four of my china poodle collection. The one with the quizzical head and flappy ears has a moveable head. The one on the left is my first ever china poodle. He is some kind of Dutch liquer bottle. The second from the left is just white china and the one on the right is pink. Very fifties dressing table looking.
I don't know what it is about them but I love them. There is such a variety around.
Posted by Sarah at 14:47

It's been very hot here as well, a lovely change! My daughter goes to uni in Kent so will have her graduation ceremony in the cathedral, very grand!
Hope you take photos at the eventing event you go to!

Wonderful this & that post today, Sarah... LOVE the kitties in the window...and sweet Cassie of course. Fun with the bunting around Rochester. We will likely stay up to watch the opening ceremonies tonight. :o) Happy weekend ((HUGS))

Cassie's white feet are so sweet and I always love her determination to blaze an individual trail. I am 'anonymous' who asked about her. Had known which posting option to use since I'm not blogging at the moment!

Really enjoy your photographs as I used to be a Londoner. Your friend was right about the heat travelling to Hastings. I'm in Eastbourne, just along the coast at the end of the A22, it's been HOT. If you are still hankering after the sea air, come down to Eastbourne for the annual Lammas Festival, it's forecast to be cooler this weekend!
Kay
smockerydolls.blogspot.com