(Sing to the tune of Frere Jacque)

The giant Usain is finally finished. I love him! I put him up on Friday, so the kids have not seen him all put together yet, only in parts. It has been so lovely to be able to do a project that has taken more than a week-the way we used to work in the other nursery meant that this was hard to achieve, but now is easy! 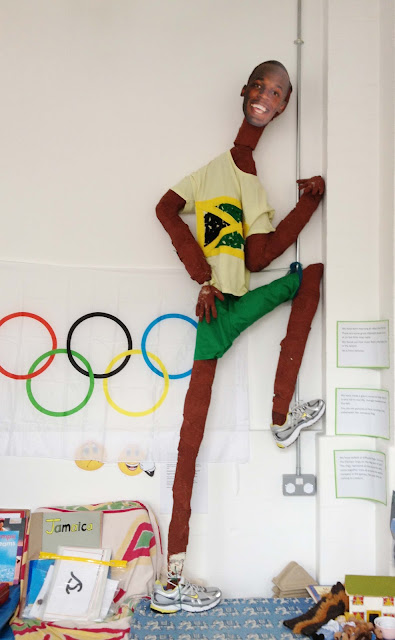 Medals for 75 children in the early stages of preparation-this job took me a very long time! We are going to write something like "You're a winner name" on the back. We are having some mini Olympic events this week, such as javelin using foam pipe lagging weighted with corks. 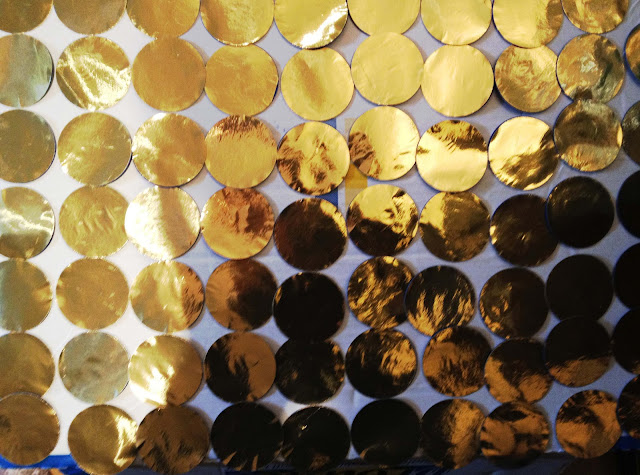 Other Olympic things seen while out and about this week... 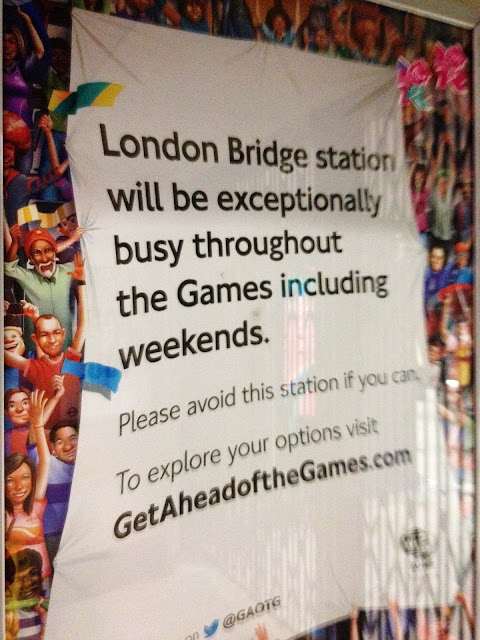 There is a hilarious announcement by the mayor Boris Johnson about the travel chaos arrangements during the games. It sounds like something out of the 1930s. (It doesn't sound as funny here but booming out in the echoey station it was!) 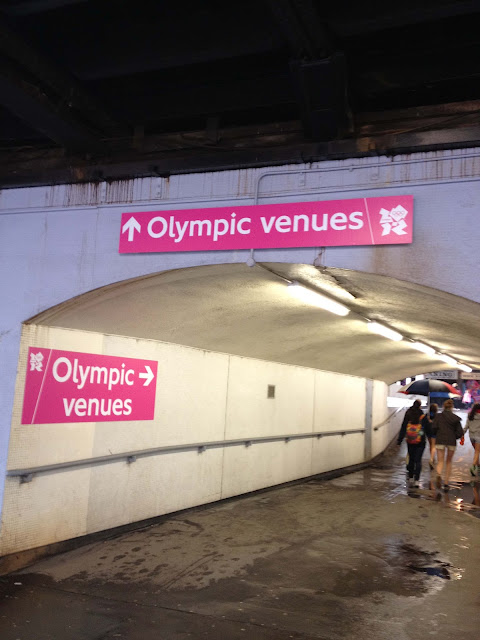 You may have heard about all the G4S business this week-in that they admitted that they would not be able to provide the vast amount of security staff ordered, and so the army has stepped in. The news has all been very negative so far, but hopefully it will all work out. There is certainly a lot of last minute preparation going on everywhere. I went to London Bridge to meet a friend yesterday, and it has been transformed and actually looks pretty good. The Shard is just outside the doors, and there are men in high-viz jackets everywhere, finishing things. 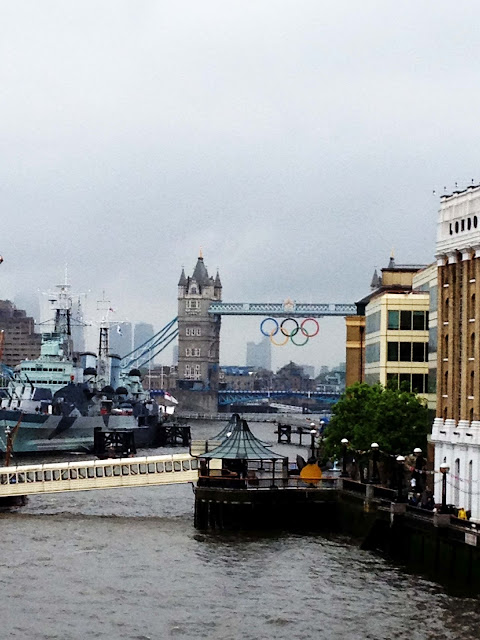 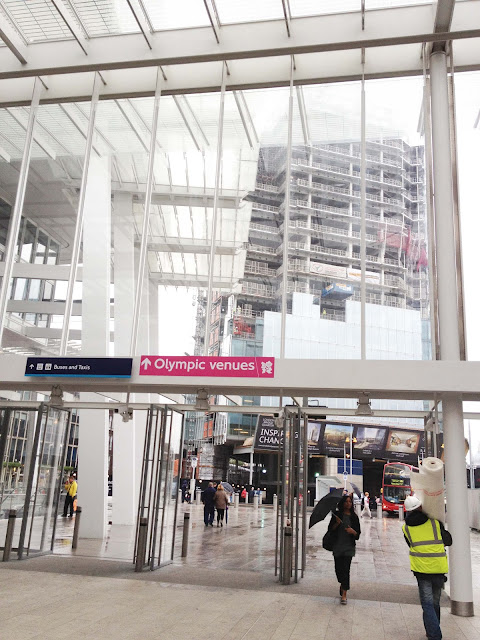 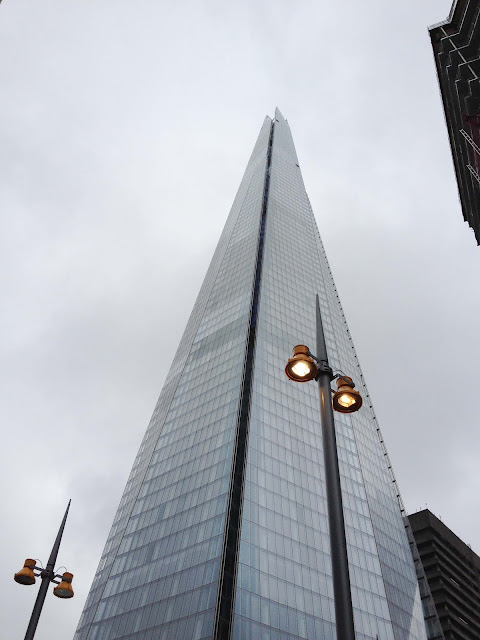 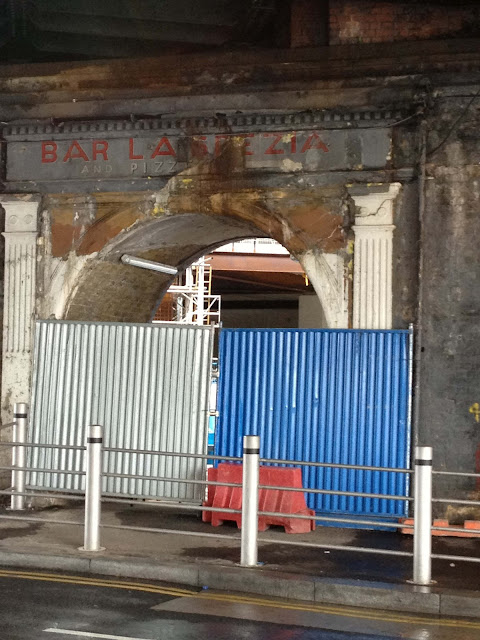 They seem to have missed a bit! I like the weathered writing above this arch and the way the fencing is patriotic. It will probably be painted over this week. 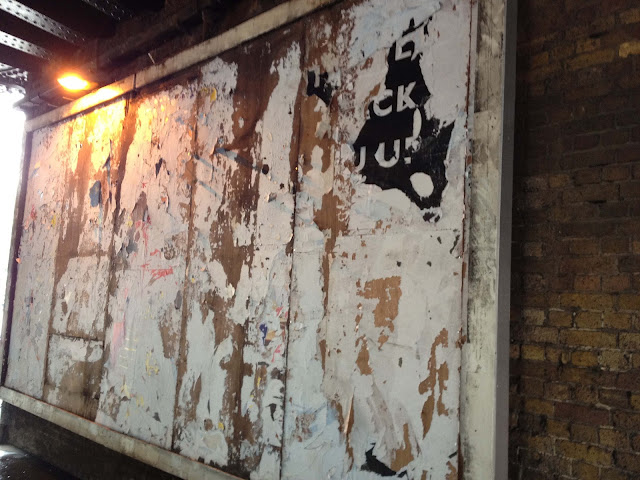 This billboard has seen better days. I love the way the layers are exposed when they get like this. In Rome, the posters seemed never to be removed, just stuck layer upon layer. 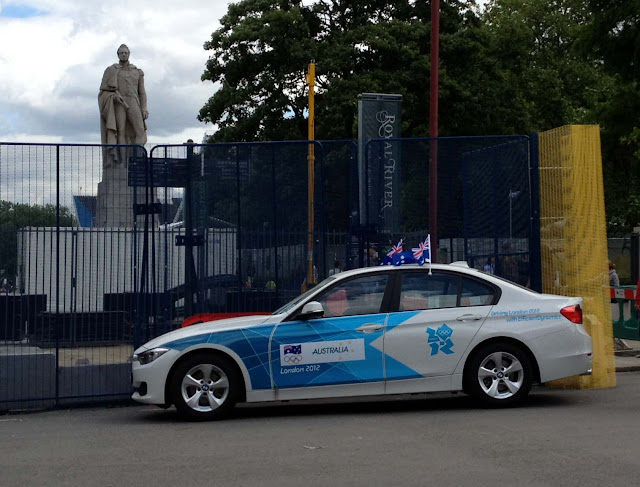 Some members of the Olympic Family all the way from Australia. I don't know who invented that term 'Olympic Family', but I wish they hadn't.
Posted by Sarah at 14:08

Love the rings on the bridge and the low angle on "The Shard." Best wishes for all kinds of Olympic success to your students and to London in general.

I am so very excited for the Olympics to begin. You must be beside yourself!

I love what you are doing for your students, the rings on the bridge look amazing.

Yay, Usain Bolt! I think you made a lovely sculpture - you put such a lot of effort into your work with the kids, and I am sure they will remember your classes even when they are old and grey.

I love your Usain! What a lot of work you kave put into your Olympic medals - you deserve one for being such a good teacher I heard on the radio that the "Olymoic Lanes" on the roads came into force this morning -even cyclists will be fined for using them (it makes me think if the old USSR!!)

How neat! The rings on the bridge are so pretty!