Grrr rain! Grrr moving! Grrr builders not doing things when they promised to (though the builders have actually been very nice today) Grrr everything! That is my less than in reality moan about today, a bad day, one which I had bad dreams about last night, rightly as it turns out. We had to unpack and sort out everything today as the kids are in tomorrow. The classroom is just about usable, we have no storage, a door which wasn't there last time has appeared between our room and the headteacher's office next door (though it is rumoured he is only in on Tuesdays-the head of the other school, not ours) The kids will probably not be able to go out properly for at least a week. The toilets are through four sets of doors-three at the actual toilet and our classsroom door, and we need two adults to go with a child each time they need to go. We don't know yet if our lunches are arranged and the full timers are back in for dinners tomorrow. I could go on but it is very boring so I won't. Instead I will show you my creative efforts from the weekend. I could have done loads of work yesterday and Saturday evening, but instead I chose to make bears. Miniature bears! I am so pleased with them. It is a mixture of things that have combined to make we want to do this, the main one being the lovely lady that Linda Sue and I met at the market, who made all manner of creatures from all kinds of fabrics. One of the sweetest things on her stall was a little rabbit made from mohair. It was £30 and I could not justify it somehow, but it made me want to try to make my own mohair creature. Instead I bought a mohair rabbit from Ebay-it is very sweet. But that is another story. I asked the lady where she bought mohair from-Germany. I have since read that Germany produces most of this bear making fabric-Steiff bears are German aren't they? Should have realised. Then I found a woman getting rid of some of her mohair stash on Ebay-and bought three pieces in the end. I am being very careful and economical-and tiny bears don't take much fabric anyway. 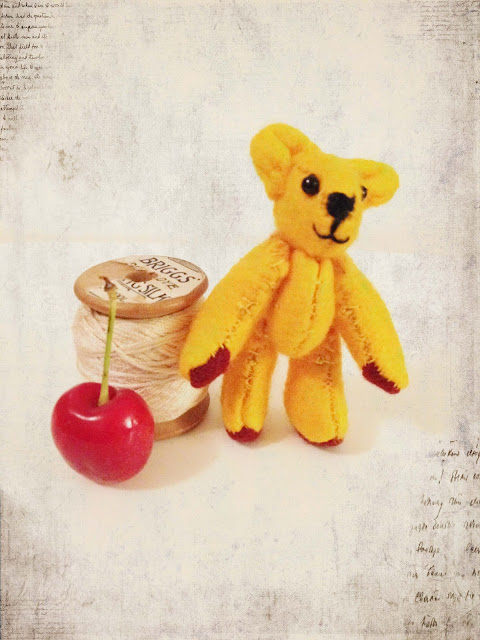 This is little prototype bear. He is a dangerous bear. Not so much for his fierceness, more that he caused me to be almost stuck on top of the desk in the back room, where I had climbed to get the bead box (once I remembered where it was!) and from which I couldn't get down. If you could see all the extra school related stuff in there at the moment you would see why-grrr! 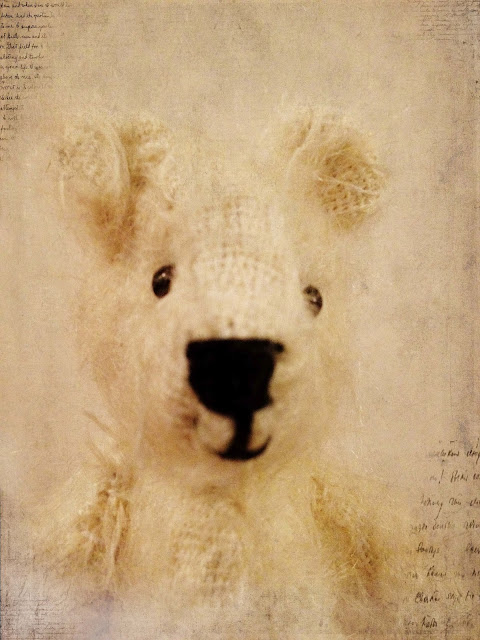 Little white bear is 150% bigger than little prorotype bear, and is made from the posh mohair. I used Kim Klassen's 'Aurora' texture, with other photoshop filters, to fancy up the photos a bit. I like the nostalgic look they have now. (Thanks Kim!) 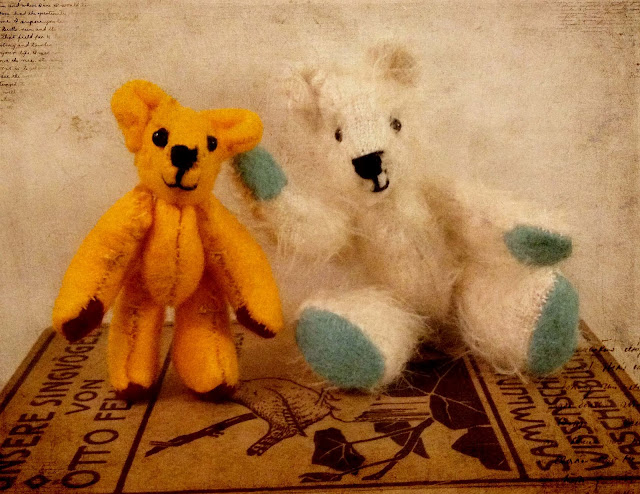 The beauty of the fur is that the stitching disappears-unlike on the felt bear.
'Frankenbear' is what Andy called him! 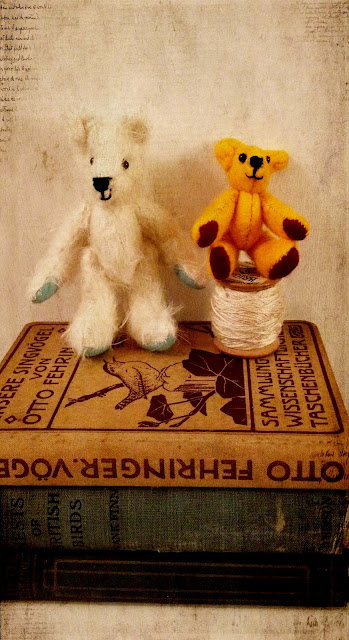 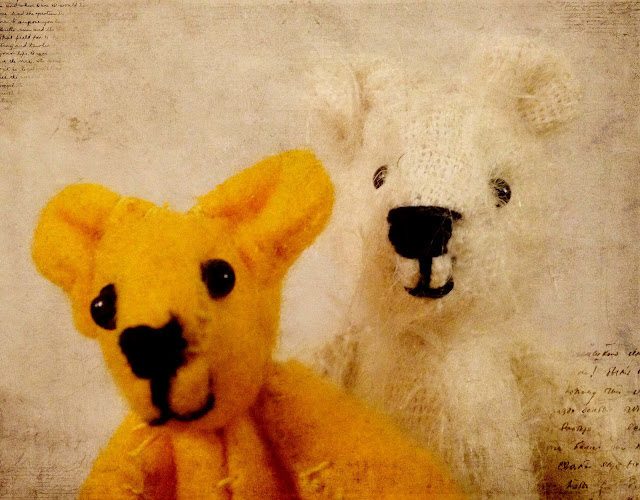 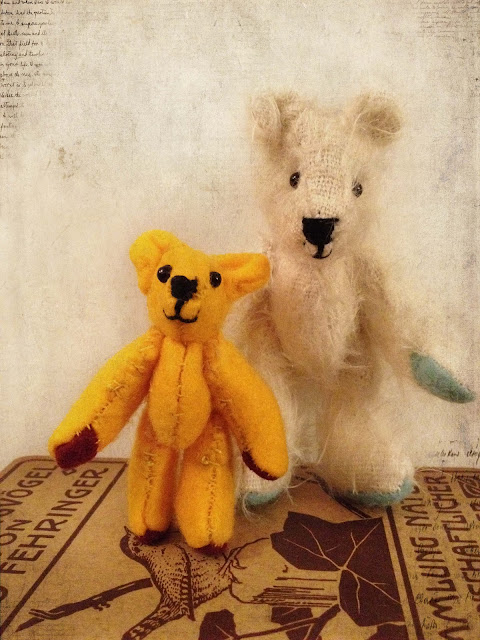 It sounds like you have every right to join your new bear friends in a big GRrrrrr! Good luck with the new classroom. Love the friendly smiling bears.

Grrrr is right! Too many doors I'd say.
Your little German mohair bear is so soft and sweet looking. I like that the stitches are hidden. His little padded paws just add to his cuteness!

I love the bears!! Isn't it funny how "improvements" somehow end up being anything but? I wouldn't want to have four doors between me and a small child needing the toilet - usually when they need to go, they need to go NOW!!

Those bears make GRRR turn to GRRREAT though, don't they? :)

Frankenbear is my favorite bear in the world- Oh, I do love little yellow grr bear as well- but mohair just does it for bears, does it not? I had a wad of mohair favbric and thought I had it in storage- but alas it is not there- Sorry. I will keep eye out for some at charity shops and the like.. Your new family is adorable- promising indeed- Rabbits and owls and spiders would be so cute, too- you can do anything- EVERYTHING!
The school is certainly schooling you in lessons of patience and "make-do" ish ness. What a pain!
I miss you....

Have quite the soft spot for miniature bears. And they are good companions to Grrrr your way through the day with.

Sharing my mantra for tough moments with you... "May all be well, and all manner of things be well..." :o) I hope things will be more smoohter sailing for you, Sarah. SWEET little bears! ((BIG HUGS))

Oh Sarah, schools and moves designed without the children and the staff in mind... grrrrrr!!! I'm sorry to hear this and hope the situation improves.

Your bears... amazing - so cute and SO full of character! Is there nothing that you can't turn your hand to and do fabulously?! I've said this before but I feel compelled to say it again - your creativity, and how you dive in and give anything that takes your fancy a go, is SO inspiring to me!