I saw this window in the Bath Fashion Museum, and just had to have some of that knitted bunting! I am in the middle of making it at the moment. There was a bit of trial and error in making the triangle a pleasing size, neat, and tapering well. This is my pattern written in a non-knitting pattern way, should you feel the need for some knitted bunting too. I am using 4mm needles, and any yarn I have which is a colour I like-though I have mainly stuck to wool rather than cotton as I think all the same material looks better. Though from a distance it won't show.
Cast on 25 stitches, knit five or six rows-to make about a centimetre of straight section for the bias binding. Then, knit one, knit two together, knit nineteen, knit two together, knit one. Knit four rows. Repeat the above-knit one, knit two together, knit most of row, then the last two before the last stitch, then the last stitch, then knit another four rows. I preferred reducing it on the stitch not immediately at the end as it looked neater. (I tried reducing it in the middle of each row but a definite angle developed-interesting!) Once you get down to the last few rows, knit four of the row with four stitches, then two or three of the really tiny rows as it gets too skinny. And just improvise the reduction until you are down to one. Very easy! I like the way the little tails have been left at the end so I have done that too. 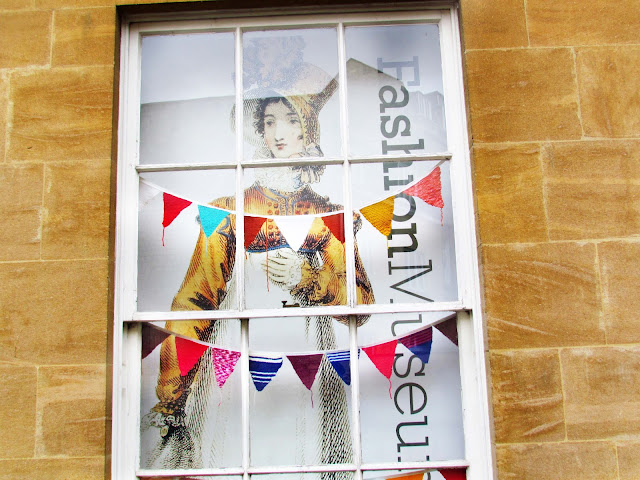 I went through old copies of Country Living magazine the other day, looking for tea party inspiration. I found so much that I have temporarily covered the little piece of kitchen wall I use as my photo background. So pretty and so easy. I might do this more often. 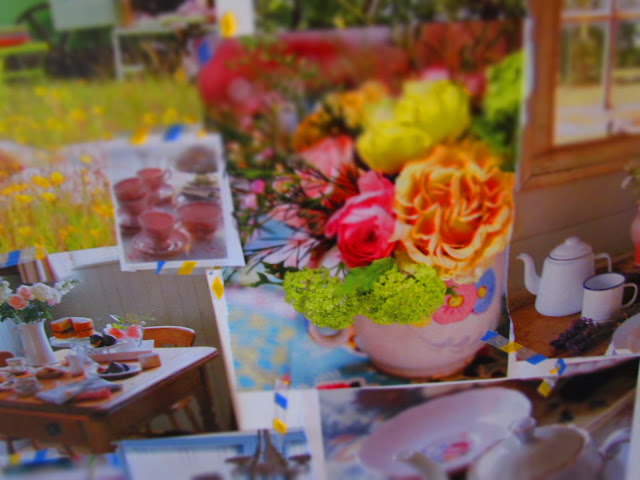 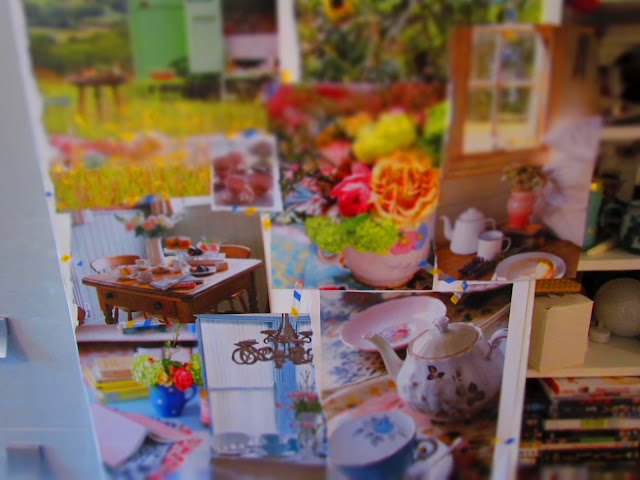 Here is the reason I have been thinking about tea parties-the Mad Tea Party, hosted by Vanessa at A Fanciful Twist. I love this event, and started thinking about it ages ago, but needed some extra ideas. It is on the 28th July-at the end of term I think-perfect! This is the fifth one, and I have now joined in with four. Being able to join in was one of my reasons for wanting to start a blog in the first place. I love Vanessa's magical view of the world, and always come away from a visit there feeling inspired and thoughtful. 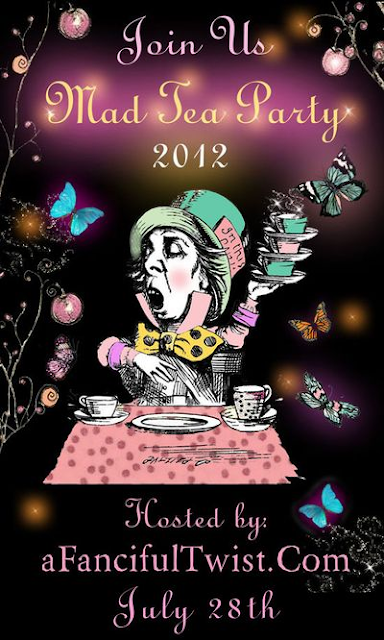 So, inspiration has visited, and I am busy with various projects as usual. I clear the kitchen table, and no sooner than it is clear, then it is full of things again. Ah well, what else is a table for? Eating? No! (Well occasionally!)
Posted by Sarah at 13:31

I too am super excited about Vanessa's upcoming Mad Tea Party!! This will be my first!
Out of all the textile crafty trades I've mastered kniting is not one... You will definitely have to show off our bunting when it is complete. It sounds like great fun.
Have a wonderful day.
Always, Queenie

I like Vanessa's blog. After my book on Lewis Carroll was published I was guest of honour on her blog. We went to a local school and had the party -it was so much fun!

My mum knitted some gorgeous aubergine coloured bunting as part of her Christmas decorations last year, it looks so pretty hanging in the window with sparkly silver thread. I bet yours looks really good too. :-)

It will be my 2nd Mad Tea Party, very excited!!

The bunting looks lovely...and all the tea images are inspirational!

Knitted bunting - delightful. How about some crocheted bunting??

I tried a crocheted piece too, but for this I am finding knitting quicker. I only did single crochet stitch and think double or triple would give a more pleasing effect.