Cutty Sark and The Painted Hall

We visited the Cutty Sark today with my Dad and Joan. It was interesting to see the changes since the last time we visited, before the renovations after the fire. It is much more of a museum now than it used to be, but done in a tasteful and sympathetic way. The floor of the bottom deck is made up of tea chests, and they-or at least mock ups of them have been cleverly used as display areas for art, photography, and information relating to the ship and the tea trade. 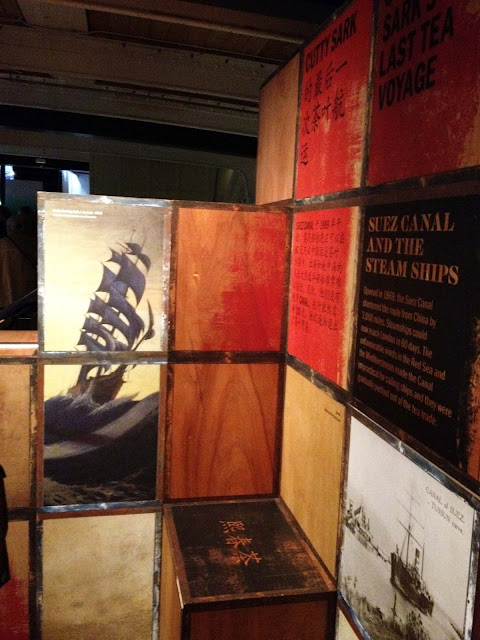 The upper deck is much the same. I love the sturdy wooden pulleys. This deck was in Chatham being renovated at the time of the fire, and so escaped damage. 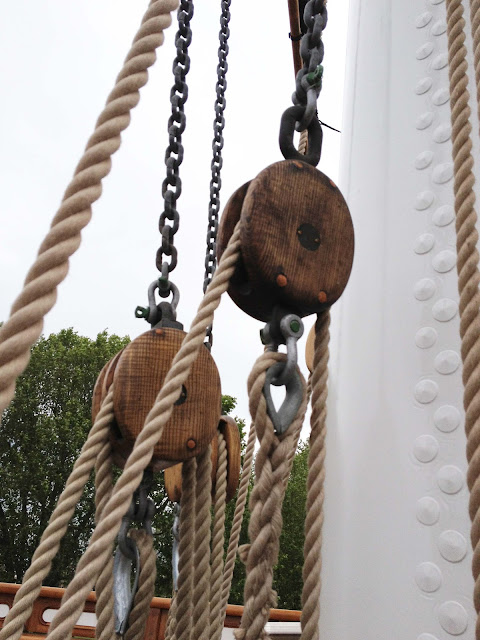 The Tween deck had a lot of interesting information on the wool trade with Australia, such as the fact that a Merino sheep apparently produces enough wool in a year to make 5,000 miles of yarn. That does not sound possible to me! Why is it so expensive then? is what springs to mind! 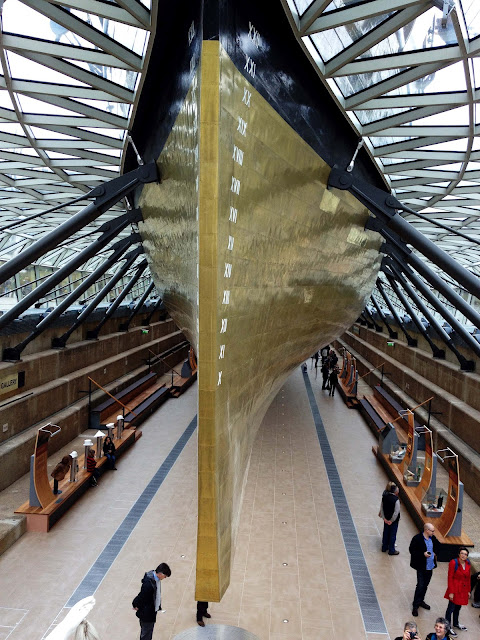 The new feature is the access to the bottom of the boat. It is quite beautiful. Brass is the metal cladding the sides-apparently more resistant to barnacles than copper. 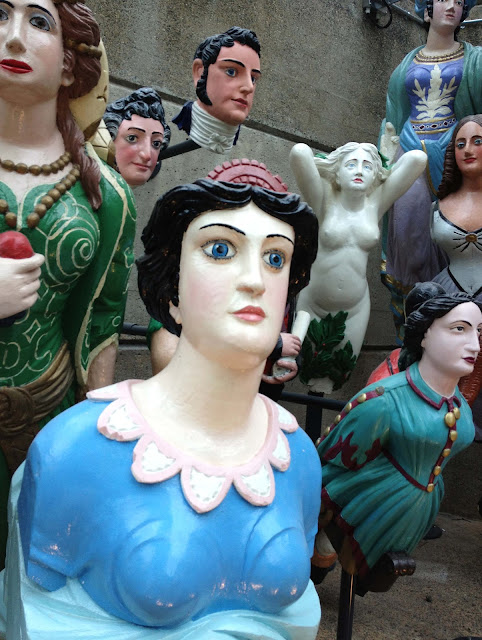 I was so pleased to see that the collection of figureheads is still there. That was my favourite thing when I visited in the past. It seems such a whimsical thing compared to the totally practical nature of life on board a ship. On Viking ships they were there to ward off evil spirits. On these later ships, starting from the 16th Century, they were there to demonstrate wealth and power, and also to illustrate the name of the ship to a non-literate society. (Info. from Wikipedia here) I suppose these must have been elsewhere at the time of the fire too. Phew! 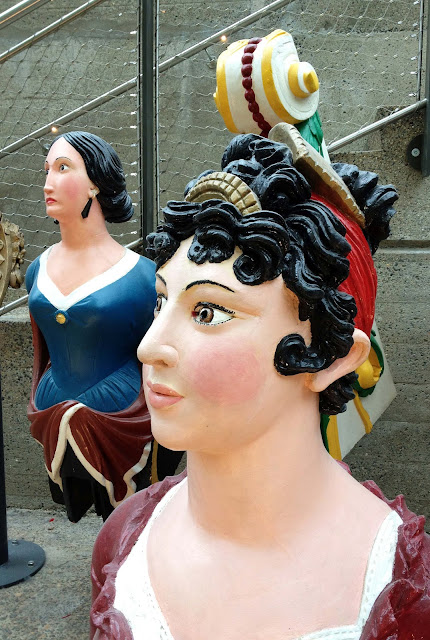 After lunch we visited The Painted Hall. I have not been in here for years and had forgotten just how amazing it is. It is part of the Royal Naval College, designed by Nicholas Hawksmoor and Sir Christopher Wren. It was painted by James Thornhill. It took him nineteen years! He was paid £3 per square yard for the ceiling and £1 per square yard for the walls. Doesn't sound like much does it? 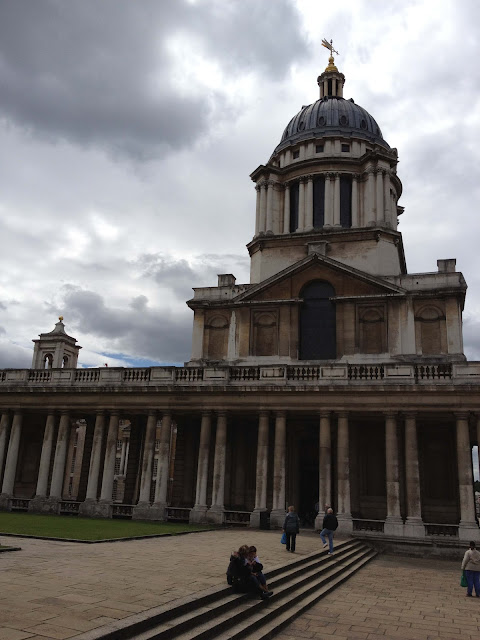 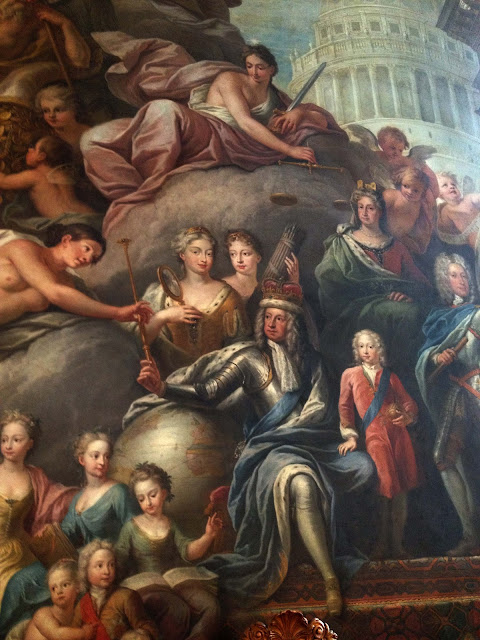 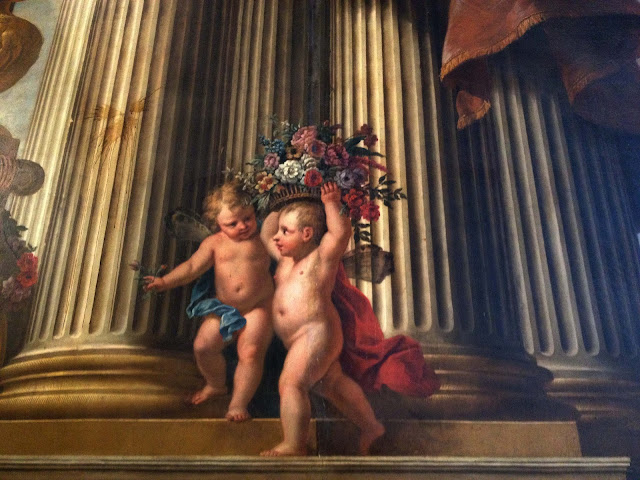 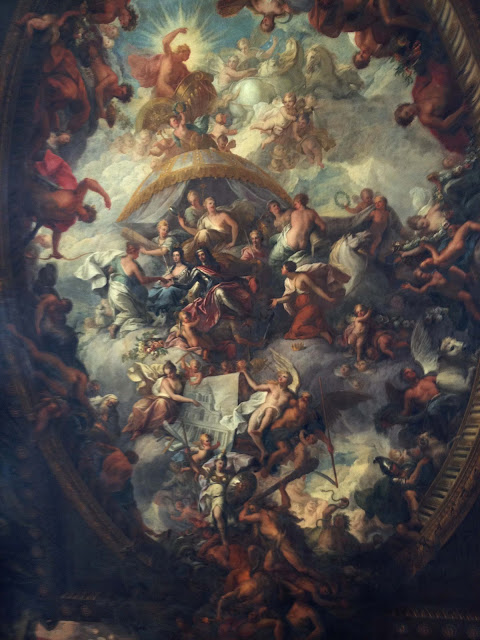 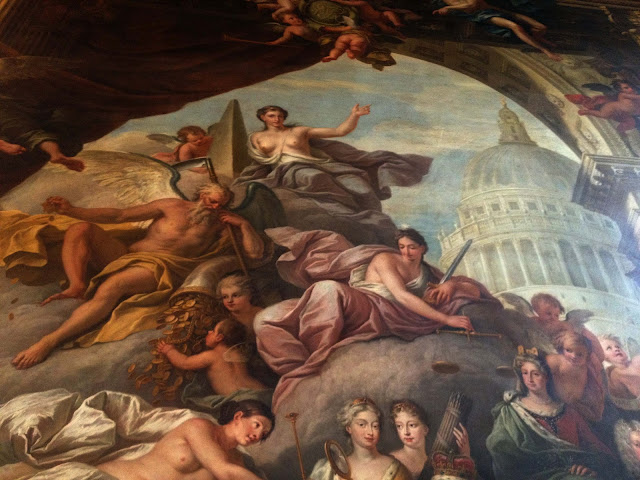 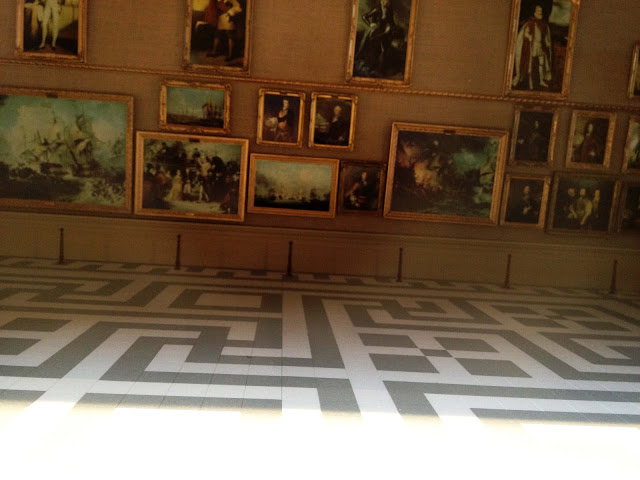 This is a miniature room in a glass case downstairs. I didn't read about it so can't say more. It looks real sized in this photo I think. 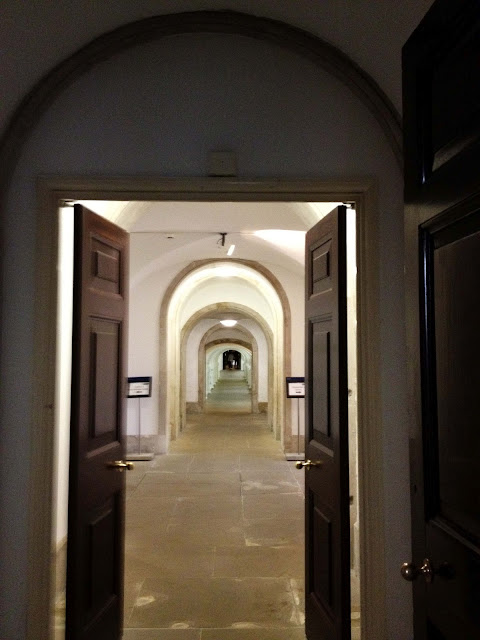 We walked along this underground passage, following a sign for the chapel. We were also following a tour group, and when they turned a corner, so did we, thinking that was the way to the chapel. 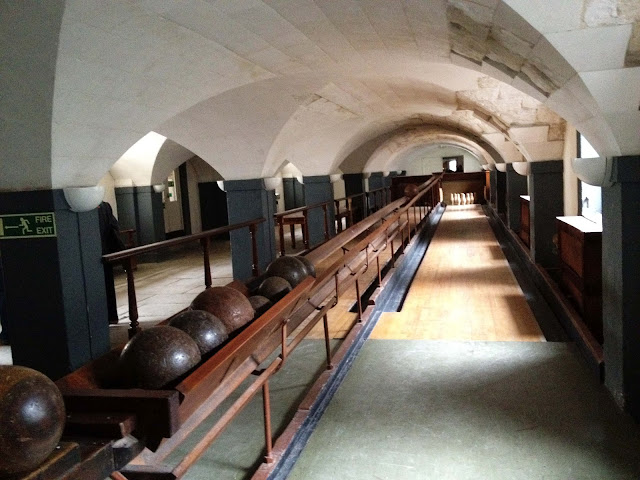 It was not. Instead, we found ourselves in this skittle alley. This was my highlight, as it was only lucky chance that we tagged along behind the group, and it was only lucky chance that they were allowed in by an employee who was collecting piles of chairs stored here for a wedding later on.
The alley is from around 1860. The bowling balls are practice canon balls made from lignum vitae. I have a lignum vitae bead,about the size of an egg, that is for a plumb line. I was excited when I tested it and found it really does sink in water.
I was just looking for information on this place, and found it was used as a morgue. Nelson was laid there before his funeral. A strange mixture of uses for a room. Read about an evening in a haunted morgue here!
Posted by Sarah at 13:32

I love everything in this post, the beautiful figurehead of the woman in the red dress with hair like snakes is fabulous. And I don't think I'd realised just how big Cutty Sark is.
The skittle alley is amazing, I wonder why it isn't part of the usual tour? It's exactly the sort of thing I'd head straight for.
Shame I live so far away...

Fascinating! I love the photos and your descriptions. We use to spend a lot of time looking at the photos and illustrations when we were children of "the fastest ship that travels the oceans" - as you know my Great Grandmother was from Scotland and so some things were as familiar to us as if we brought up in the UK.

What a lovely way to spend a day and may I ask if Sadie was along? I bet she would have gone through the alley barking at the invisible
residents. Hugs from here.

Oh, my, that skittle alley is truly fascinating. I didn't know it was there. Some old pubs still have them, although fewer every year - but this one is extra special. I haven't seen the Cutty Sark since the renovations either. After the olympics are over and the park is back in commission again, I will pay a visit to Greenwich.

Wow! Great pics. The Painted Hall looks amazing. There is so much of London that I NEED to see and we are only one hour and fifty minutes away by train, so I have no excuse. Our youngest moves there to live in August, so maybe then I'll make more of an effort. have a good week. Ros

What a great day! I would love to go back to Europe and visit all these places!

Amazing- AWESOME! So cool and thank you so much for taking us where we did not go,well, we did go there but it was not as interesting as you have made it! We did get into the painted hall and the other big building set up for some massive feed, it was cool but no where near as cool as the bowling alley - superb! How lucky for you! Excellent! Thanks for the fun outing- I miss you!
The heads are wonderful- so in love with all of them!

I am so envious, that you have all thsi so close to you - I must have a serious talk with Malcolm about visiting London and doing all the tourist stuff!!