Look to the Skies

Two pictures from the last week. The first is the new cable car, opening soon, or possibly already opened. You can use your oyster card to ride on it, so I am going to test it out soon! It starts from North Greenwich, but I don't know where it ends up. The only other cable car I have ever been on is in Madrid. It goes to the Casa del Campo-a large country park just outside the city. We were almost the only people there. We had a coke, watched the many sparrows, had a little walk, then got the cable car back. There was a commentary in Spanish as you went along. An amusing experience. Hope this one is as good.

This parakeet and his friends were making loads of noise the other evening. They were in the cherry tree two gardens along. The cats and I were all out in the garden when the birds flew low over our heads, making their distinctive screeching squawks. We all ducked! I have seen them flying over here a lot, but really high up, and this is the closest they have got to our garden. I had my big camera out, so could take a zoomed in shot of this one. 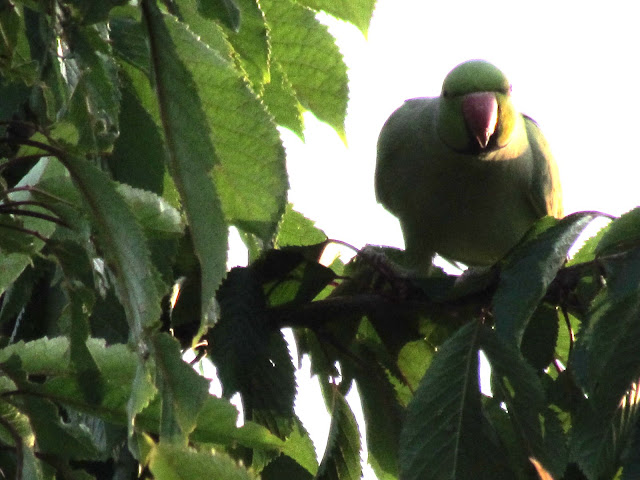 I meant to come home early tonight, to continue with my tracking which I have only just started. However, events conspired against me, and I ended up not leaving until about half four, so I have decided not to do any work, but to knit instead! I am so tired I think I deserve an evening off!
Posted by Sarah at 10:14

That looks like a super-fun ride. Hope you take your camera and us along when you give it a try. You'll have to explain "oyster card" some time, though.

Amazing that you get visits from such tropical birds and were able to get such a fine photo of the little green face.

Oh, that is very clever ... knitted bunting! I may soon be adding to my array of buntings of different kinds! PS If you ever come to Cape Town you MUST go up Table Mountain with the cable car. It has the most amazing view in the world!

Most definitely!! Take a well deserved night off :o) Enjoy!
Have a great day.
Always, Queenie

Oh yes, I will definitely take my camera! An oyster card is the travel card in London. And I must add table mountain to my list of cable cars!

Thanks for the reply. Another thing I'll need to know when I visit your part of the world.

How do those little parrots make it through the winters? Do you leave seed out for them? Are they the same breed as the ones from Telegraph hill (the documentary) I was wishing for an oyster card yesterday - to hop on the train to go to Portland. It would be so good. Handy !
I picked up a handfull of brochures and am sending them along with a witch of a knitty nature. I may get to the Post Office by Friday...

Amazing to see the parrots, I wonder where they have come from? We get similar birds here in New Zealand, in Summer.
Love the idea of the cable car.

I've been on several cable cars - but as I'm scared of heights I have never relaxed enough to enjoy the views!

I saw this cable car when I went on a tour of the Olympic site with the (ahem) British Legion (Leamington Spa Branch). It ends up at the mega huge ExCel site. Where you can...er..currently see...er...nothing ( http://www.excel-london.co.uk/whatson )! But I think there's a load of new restaurants nearby, or something.

These are gorgeous, beats the jackdaws here, though both as noisy!!