I Love This Week!

Yesterday and today I have been doing Forest School Training. Forest School in the UK was inspired by early years education in Denmark and other Scandinavian countries. They have things called 'Nature Nurseries' where children learn through being outside, exploring, engaging with the natural world and following their own interests. Children's self-esteem and ability to achieve are really important and to that effect adults are seen as facilitators rather than the maybe more traditional view of a teacher's role. This is actually pretty similar to the early years curriculum aims here, but somewhat less complicated. The people on the course are from a variety of settings including private nurseries, environmental centres, special schools and advisory bodies. It's great being on a course of this sort-it reminds me of being at college. You have the time to get to know people a little.
Yesterday was very theoretical but today we got to play! We went to the Forest School of the Environmental Centre we are doing the course at. We experienced the way a session is organised and tried out some of the activities that are made available to children at F.S. 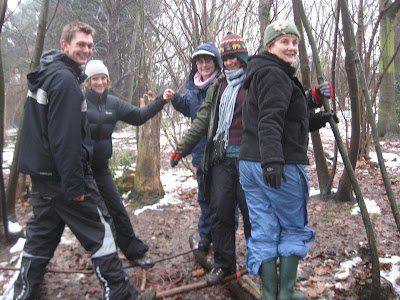 Then we were taught how to tie a reef knot, a clove hitch (I think it was called-my notes are in my bag ready for tomorrow!) and how to lash branches together. We were given a challenge to make a structure which would support our weight. This is the one my group made! We had such fun! 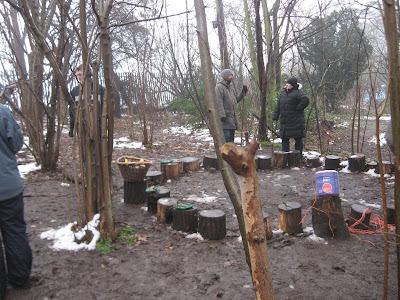 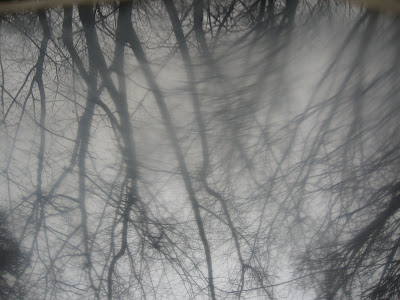 One of the activities was to hold a mirror under your nose and be guided so that you can look into the sky. It was lovely but very disconcerting and it felt as if I was about to crash into the passing branches at any minute. I took this picture to try to show the effect. 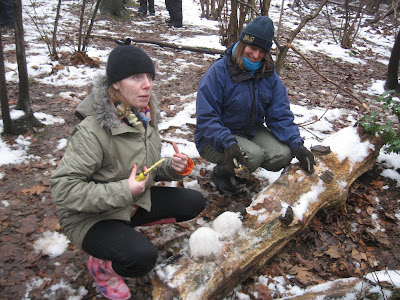 As the idea of these sessions is for children to explore in the way that they need to, activities are suggested but children choose how to proceed. Becky chose to make some 'snow boobs' and this is the moment we were discussing how much we liked them! 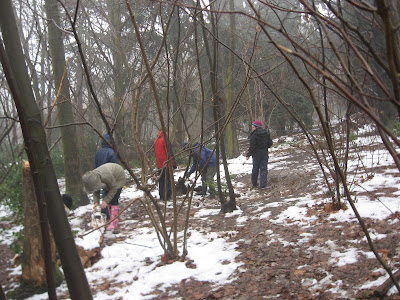 Exploring in our own ways. 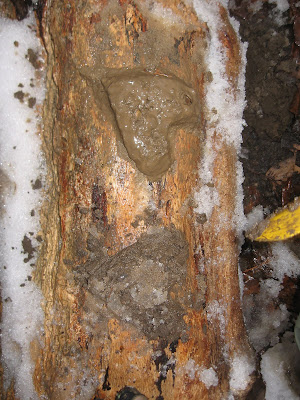 Sue made snow hearts-for some reason they have uploaded on their sides-I still don't know why it does that! 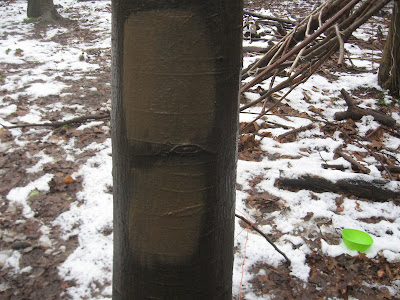 Mud painting, which I loved-believe it or not I have never done that! This is my mud Rothko. 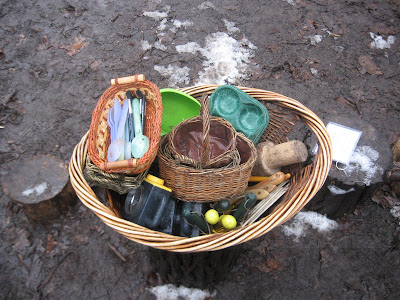 The treasure basket of activities. 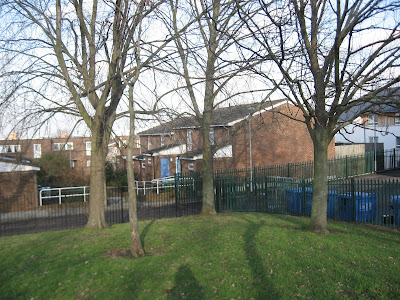 This is part of the site in my school which we are going to use. There are a few trees and it is quite long, slopes down and also slopes over. It has lots of potential!
Posted by Sarah at 14:31

I don't know if we have nature nurseries here in the U.S. I think that is a great idea for little ones. Nature is a great teacher as she is.
From the pictures, it looks like you had fun with your training.

I really wish there had been something like this when I was a child. I really enjoy nature and learning about it. I told Bryan not long ago that I want to study trees. We raise Japanese Maples and I can tell the difference between quite a few of those cultivars. But, I would like to walk in the forest and point out every tree by name. Maybe, I'll start that this summer. Glad that you had a good time at the Forest School training place.

Sounds great Sarah.
Speaking with a Swedish nursery assistant back in the UK a few years ago, she said that they take the children out in all weathers. They just make sure that they are dressed appropriatly. When we were in Stockholm in November and lots of snow about, not only were children sledging down the streets but in the church squares, children were playing in the snow as if it were sand on a beach, building snow castles, making hills to walk up, slide down. It was a lovly atmoshere with the parents either looking on or joining in. It seemed so refreshing. But then again maybe it has been like that in England this past week judging by all the snowmen pics I've seen around.

I love the idea of forest schools. They have started doing some near us.

Very cool these Forest days school. i wish that we have something similar here in Canada.
Nice and cool blog.

Oh, what fun - and what a fantastic idea. As a kid of 9 I had a teacher, Mrs Jordaan, and I will ALWAYS remember her for taking us out for walks (unheard of in those days in our kind of school!) during class and showing us all kinds of odd things - grass, twigs, the way the sun shone and how it changed during the seasons, I will never forget her - she was a true teacher ...

This is great to read about this. Having grown up in the country, after school and on weekends, Nature was our classroom as well. I remember reading about these schools and thinking how fortunate we were after all...
The photos are fantastic, Sarah! You really have quite a way with that camera. Loved the "hearts" on that tree.
Enjoy it!