Well, this Monday was the first of the observations. It was billed as a 'learning walk' which is where the people observing visit classes to get a snapshot of what is going on, with a focus in mind. The focus in our message book was independence, use of additional adults and differentiation. The walk was joined by our 'SIP' which stands for 'school improvement partner.' The head, another member of SLT and the SIP appeared in our room at about 10.45. I was outside re-enacting the Bear Hunt for the third time with a group of about ten kids. We had to do it a lot of times as they all wanted a go at being the bear. They were doing some lovely comic acting! Anyway, the head came out and asked me for my 'Learning Journeys'. I asked if he meant my 'My Books'-a book with photos of the kids which we talk to them about and scribe. It also has artwork in. I have not got far with those this year yet. He said 'No, your learning journeys' I did not know what he meant and so asked the SIP herself. She said 'you know, where you keep your post its and observations'. I call these my assessment folders and have always done this since working at the school. They are sometimes called learning journeys, or profiles, but anyway. I had to tell them that no, I didn't as they are at home where I work on them  (never having time in school.) I offered to show her my excel profiles which is where the information in the observations is used and where I keep photos. 'No, never mind' she said grumpily. So I went back to what I was doing. Nobody had a very good experience of the SIP. (Including the leadership team from what I can work out) She was not friendly. She did not talk to the small children who tried to talk to her in my class. After school we heard that in her opinion, we have not got enough evidence on the children's progress. I don't know how she can say that when she has not seen what I have got. It is very frustrating to be told things which, if you were a part of the conversation, you could explain. However, I do not feel upset by it, because I know that I am doing what I am supposed to be doing despite the shallow uninformed opinion of some. The next step is to help them to see this !
The rest of the week has been quite fun, despite being ill. I, my TA and my EYP all have a terrible cold with various degrees of lost voices, coughs and sore throats. We have all soldiered on though! A lot of the kids have got it too. We have got outside quite a lot despite the continuing rain and have done lots of fun activities. The new smart board is very popular, especially for the animated bear hunt story. Today has been my first day off this month (not ill-my two days off unpaid which are so great.) and I have spent most of it working. That is not the idea but I had a lot of catching up to do after all the late nights doing displays recently. It was worth it as I am now up to date. Yesterday I visited another nursery for the morning to look at their environment and displays. The teacher there used to be an advisory language teacher for Greenwich and she is really good and very nice. I got some great ideas for story telling, but, more importantly I was reassured by the normality of her nursery-the same issues we have such as clutter, working mess, not enough staff, the messiness of young children during  play (which people do not seem to be able to understand or accept) It was a lovely warm place which I think our nursery is too and that to me is the important thing. It was a much better designed space than our nursery. It had a kitchen! We asked for one of those but no luck.
Other things I have been up to... 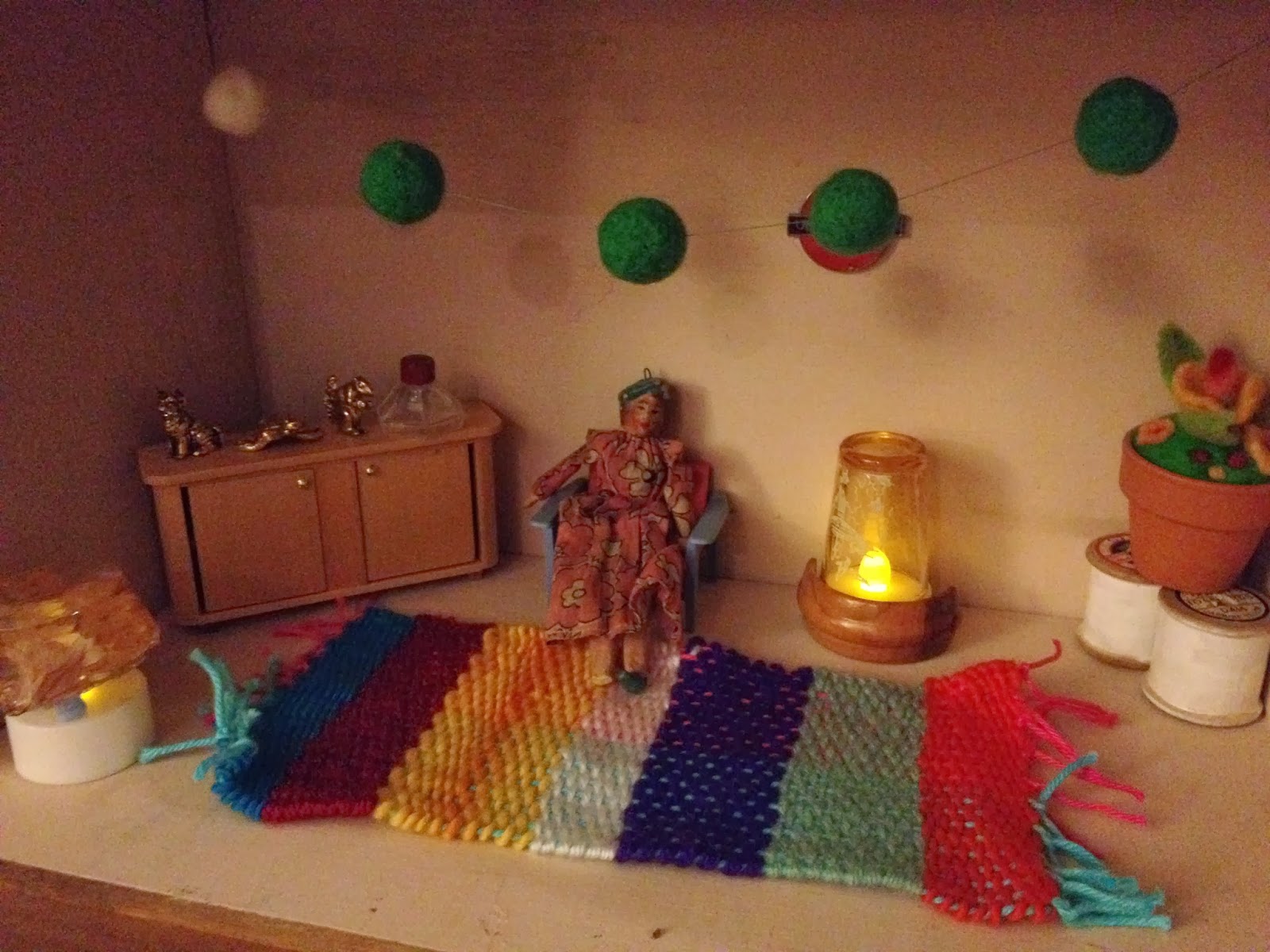 I had fun making a little scene in one of the painted boxes. My weaving became a bright rug which the dolls house lady likes. 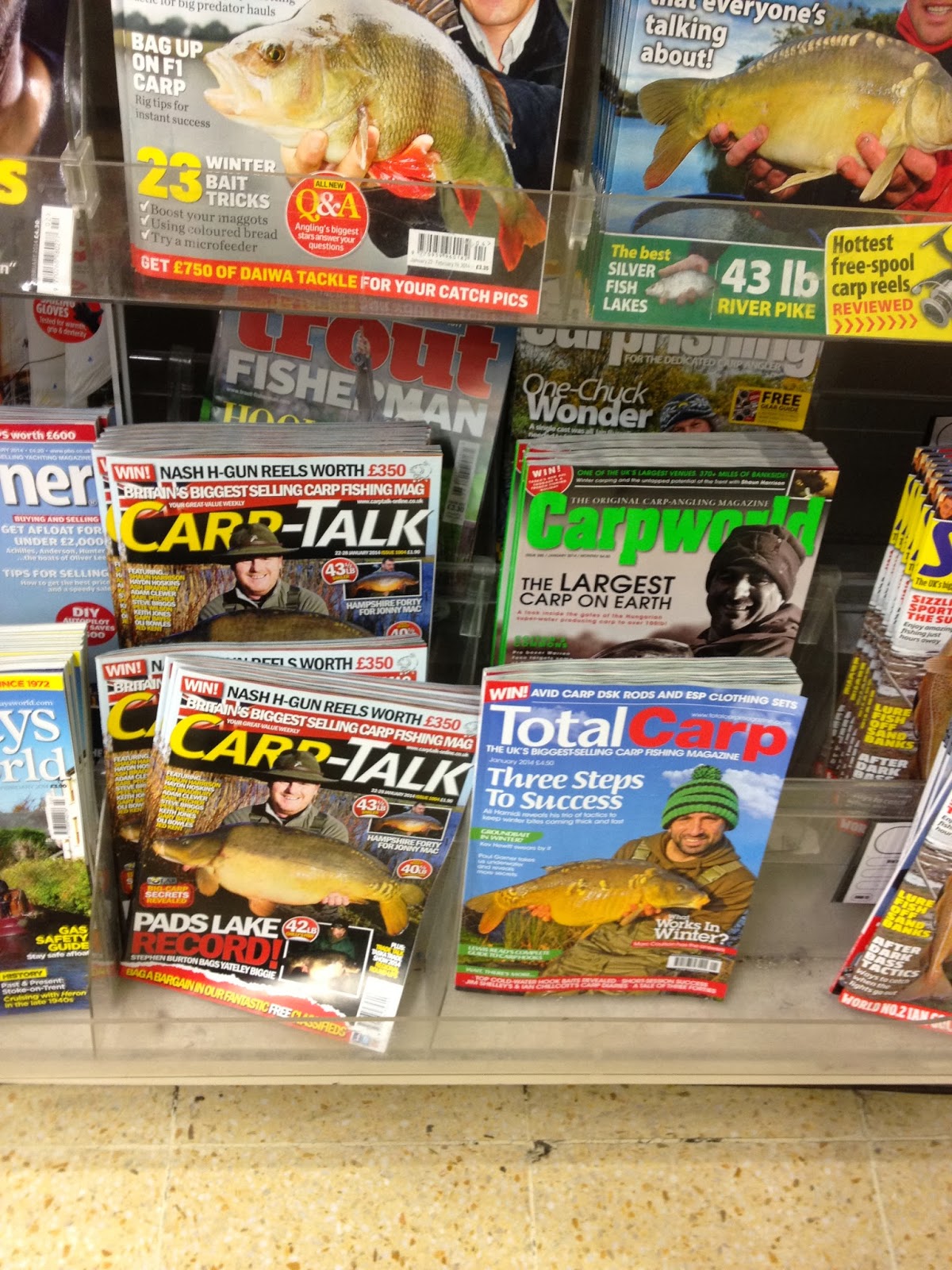 I misread the title of 'Total Carp' magazine  which made me laugh so I took the picture. 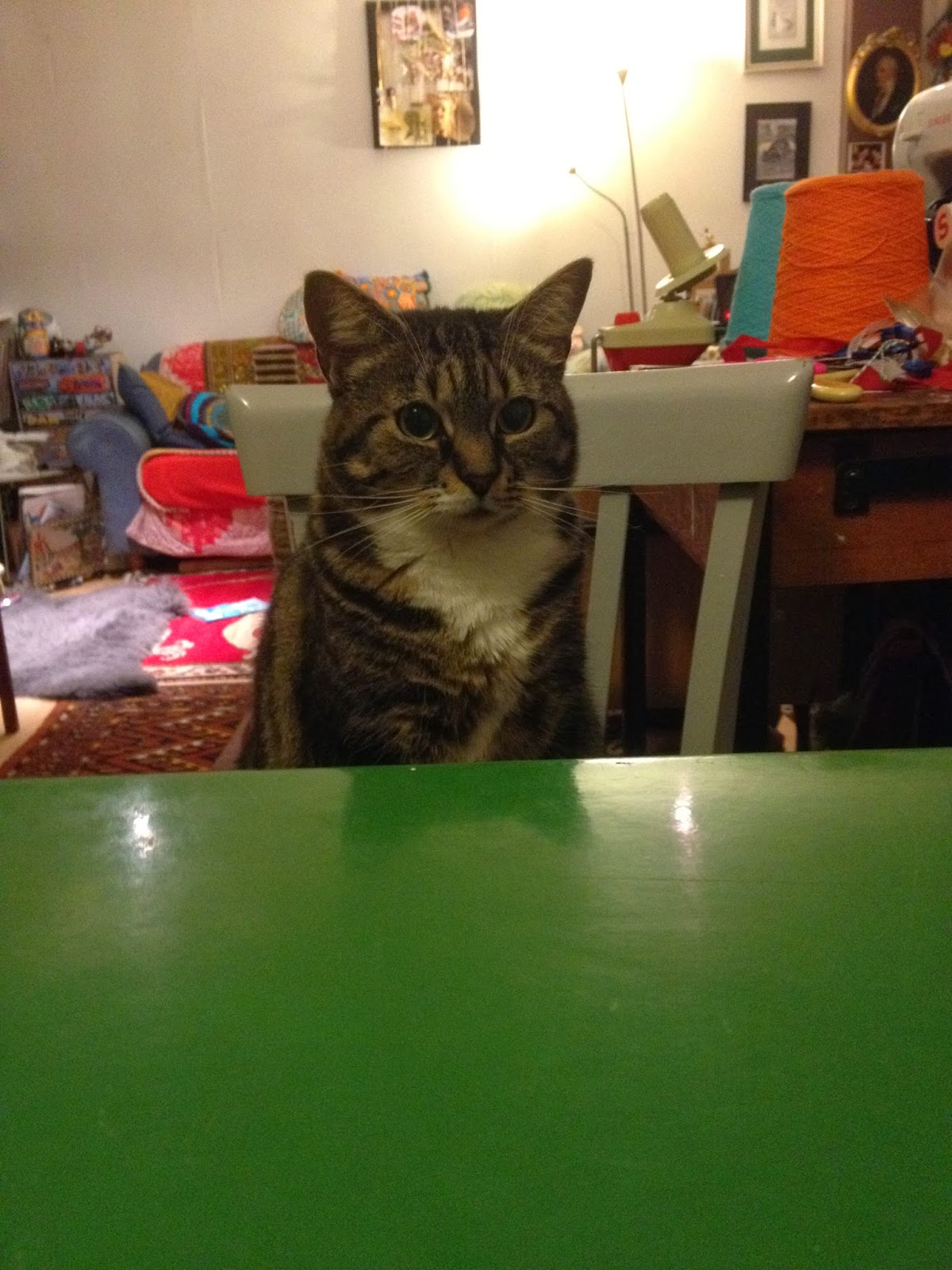 Cassie sat politely at the table waiting for treats. 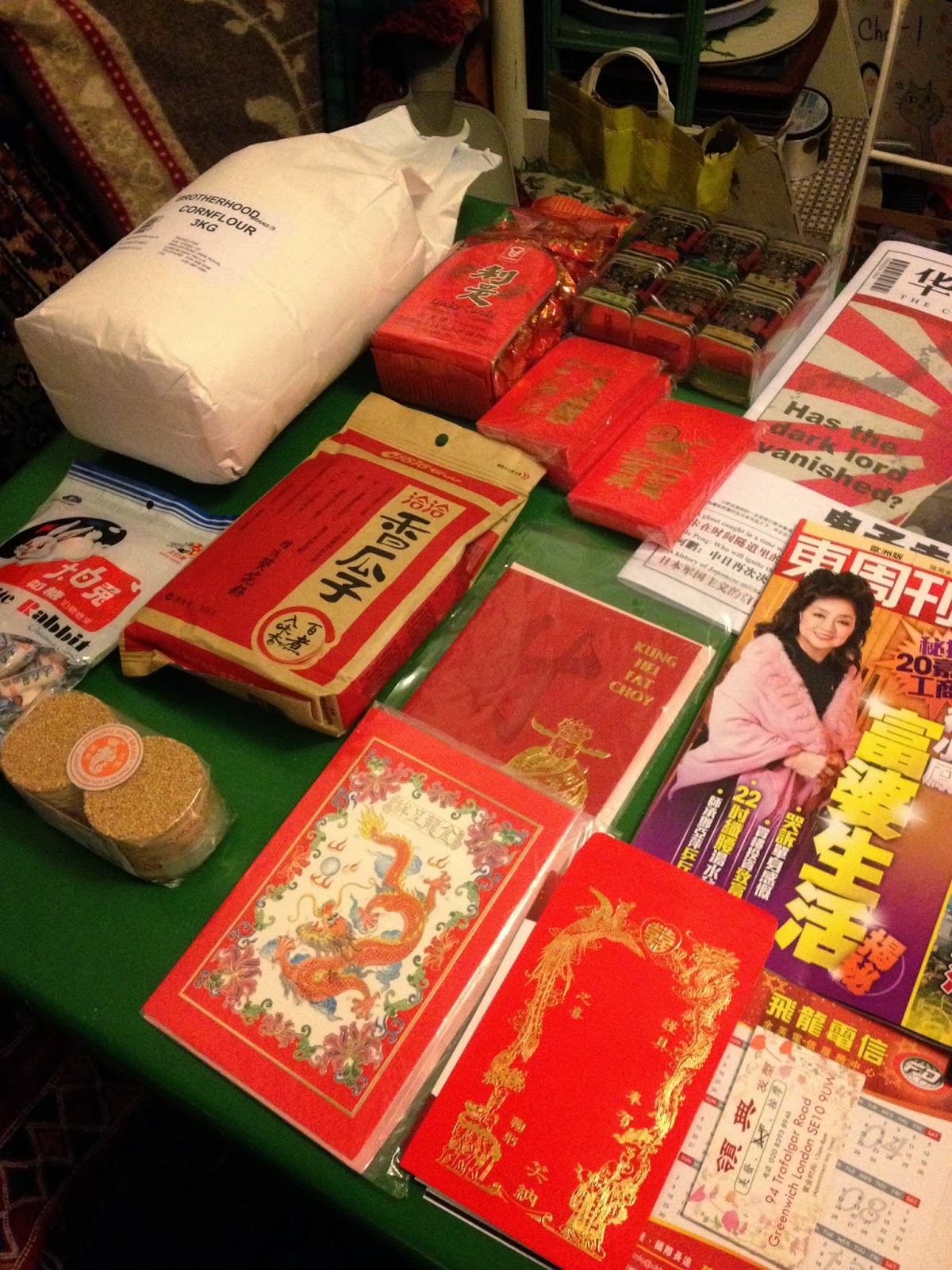 On Tuesday I took a trip to the Chinese supermarket with the other nursery teacher as we needed some supplies for Chinese New Year celebrations. It was fun and most interesting. I can't wait to take Andy there! 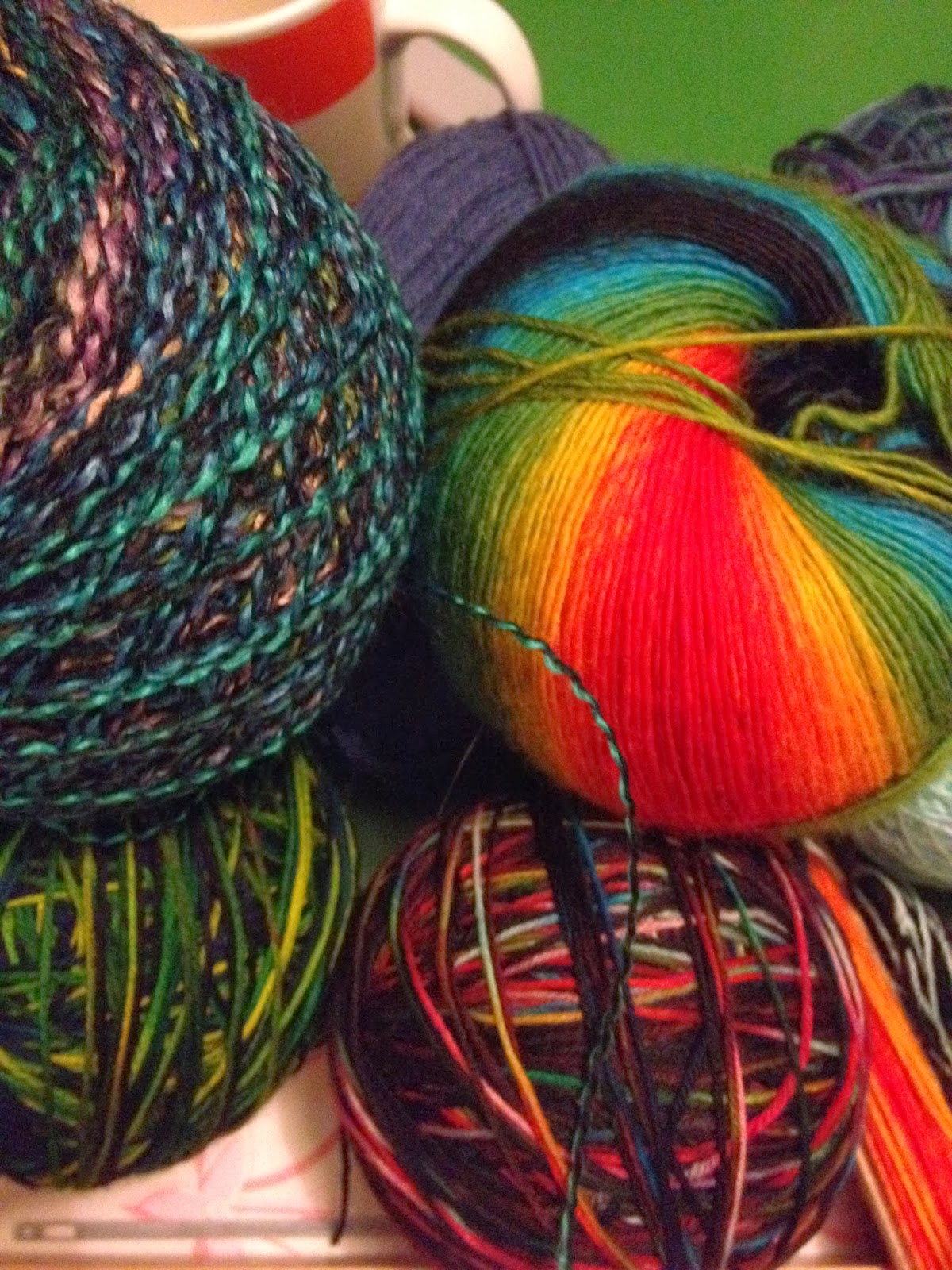 These are the lovely yarns I am using to weave myself a scarf. It is taking a while as I only get a little done each evening. It is quite exciting as you don't know what the finished article will look like as it is wound around the top of the loom. I am hoping to finish it at the weekend. 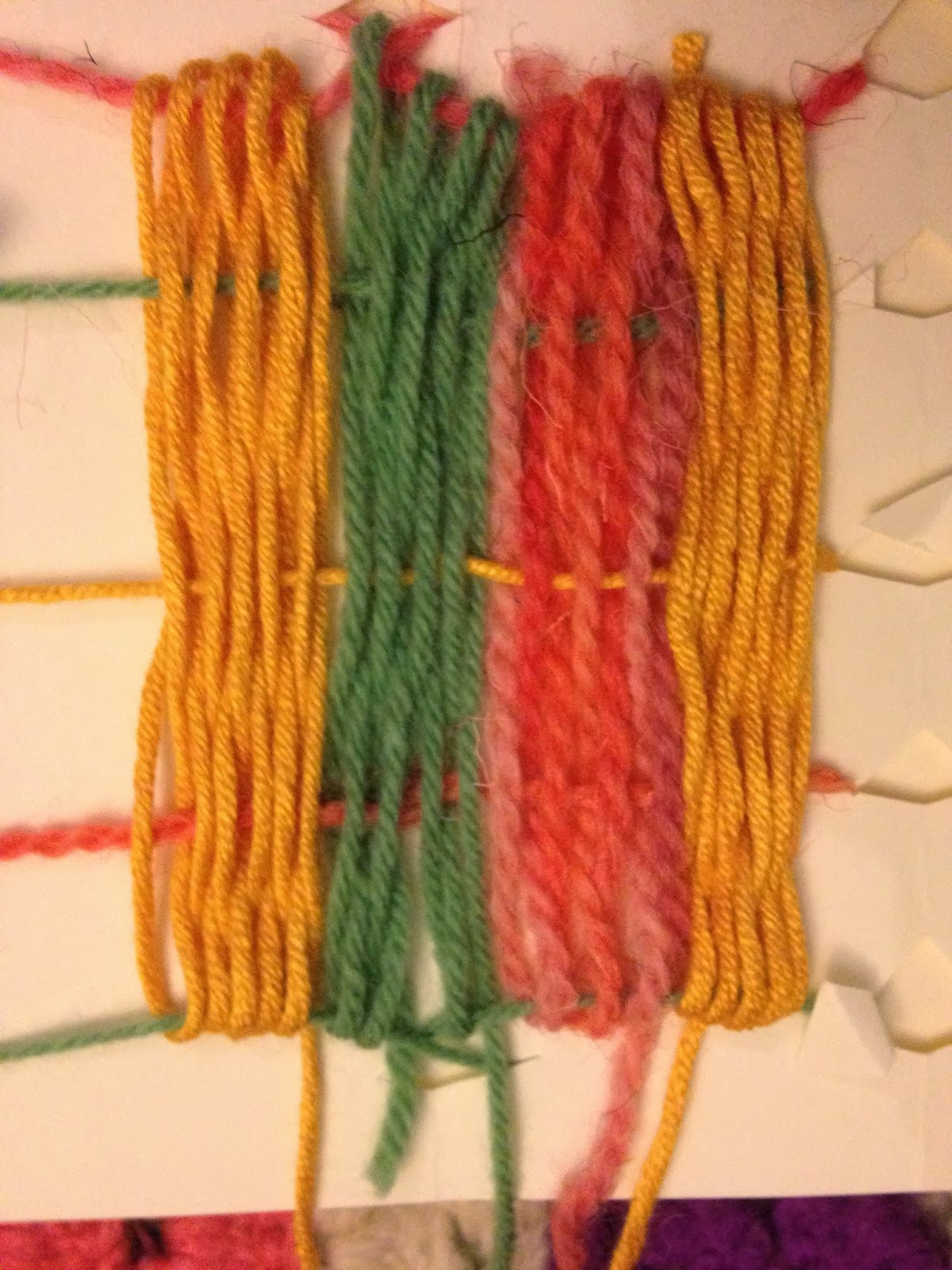 A little weaving in my journal. 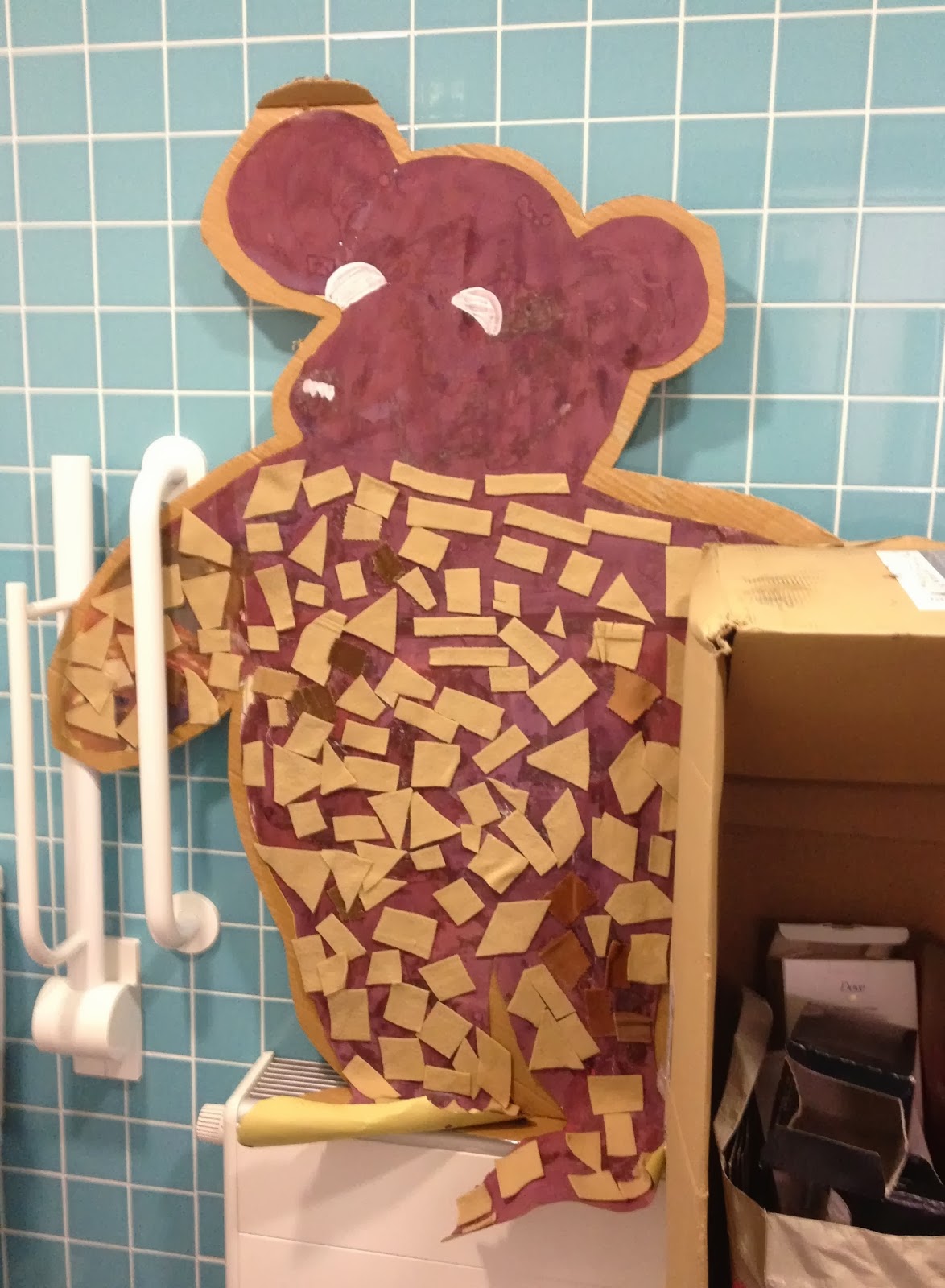 Tiptoe, tiptoe, it's a bear! He is nearly ready to go in the cave, but is currently residing in the toilet. 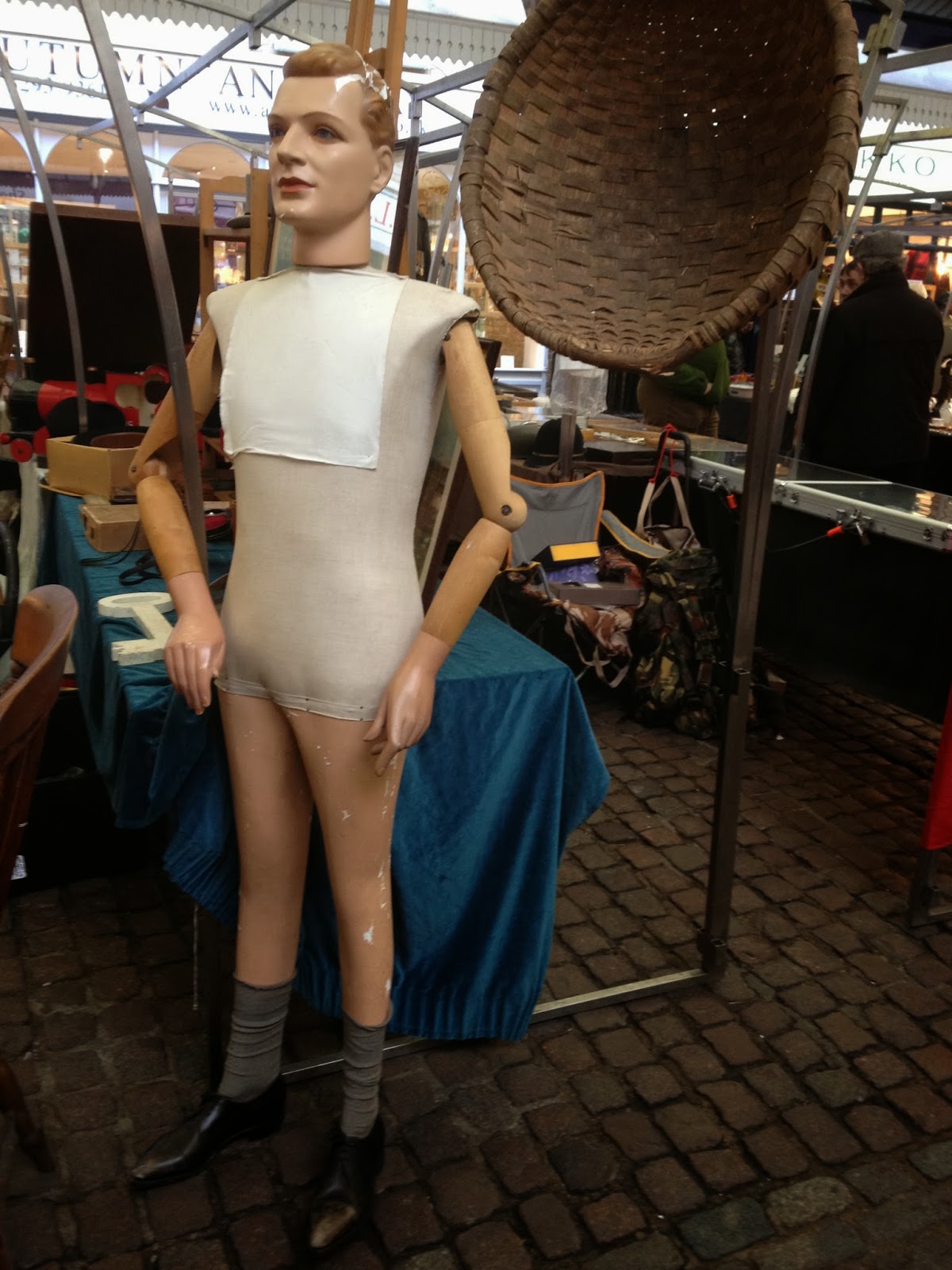 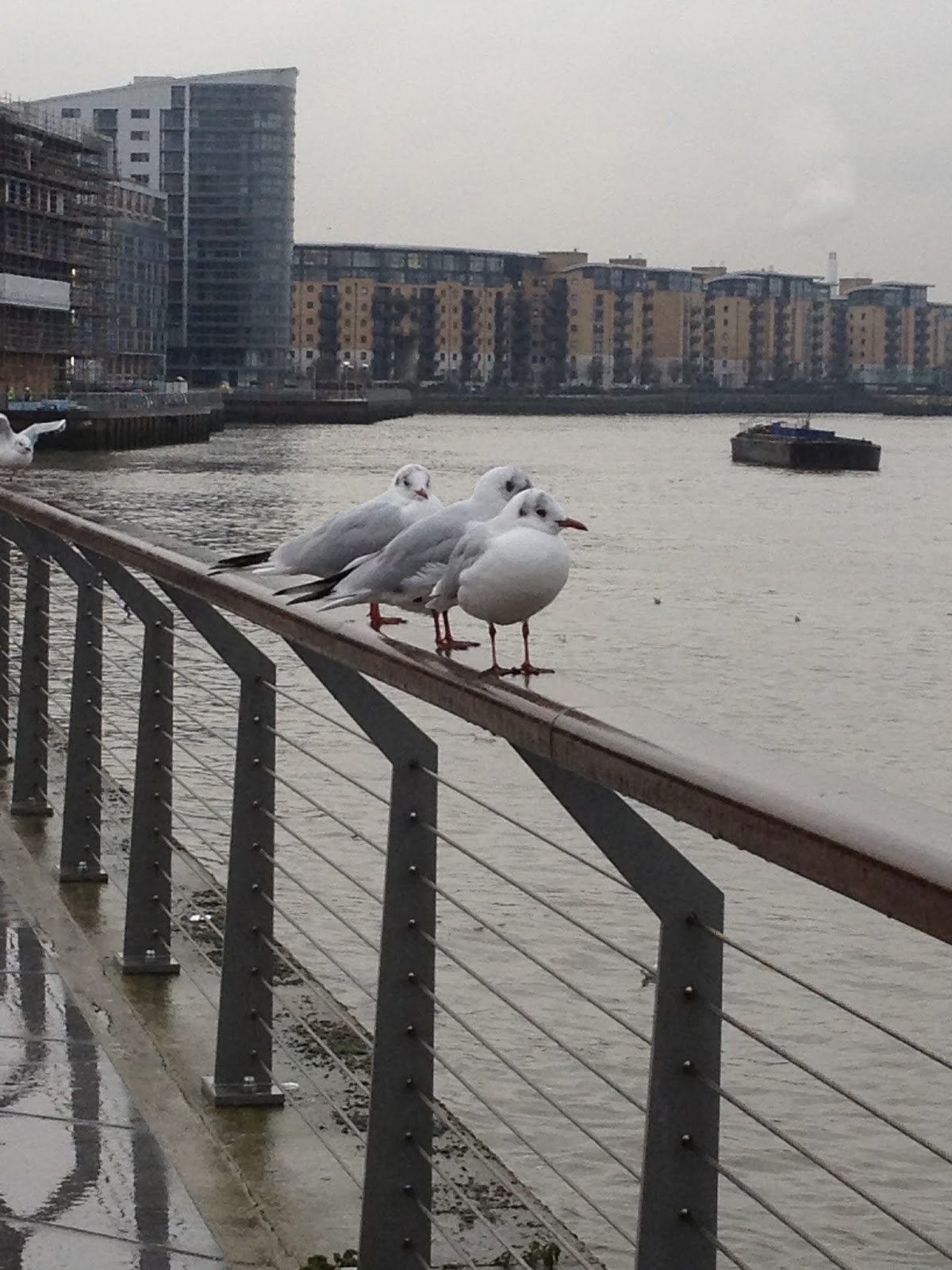 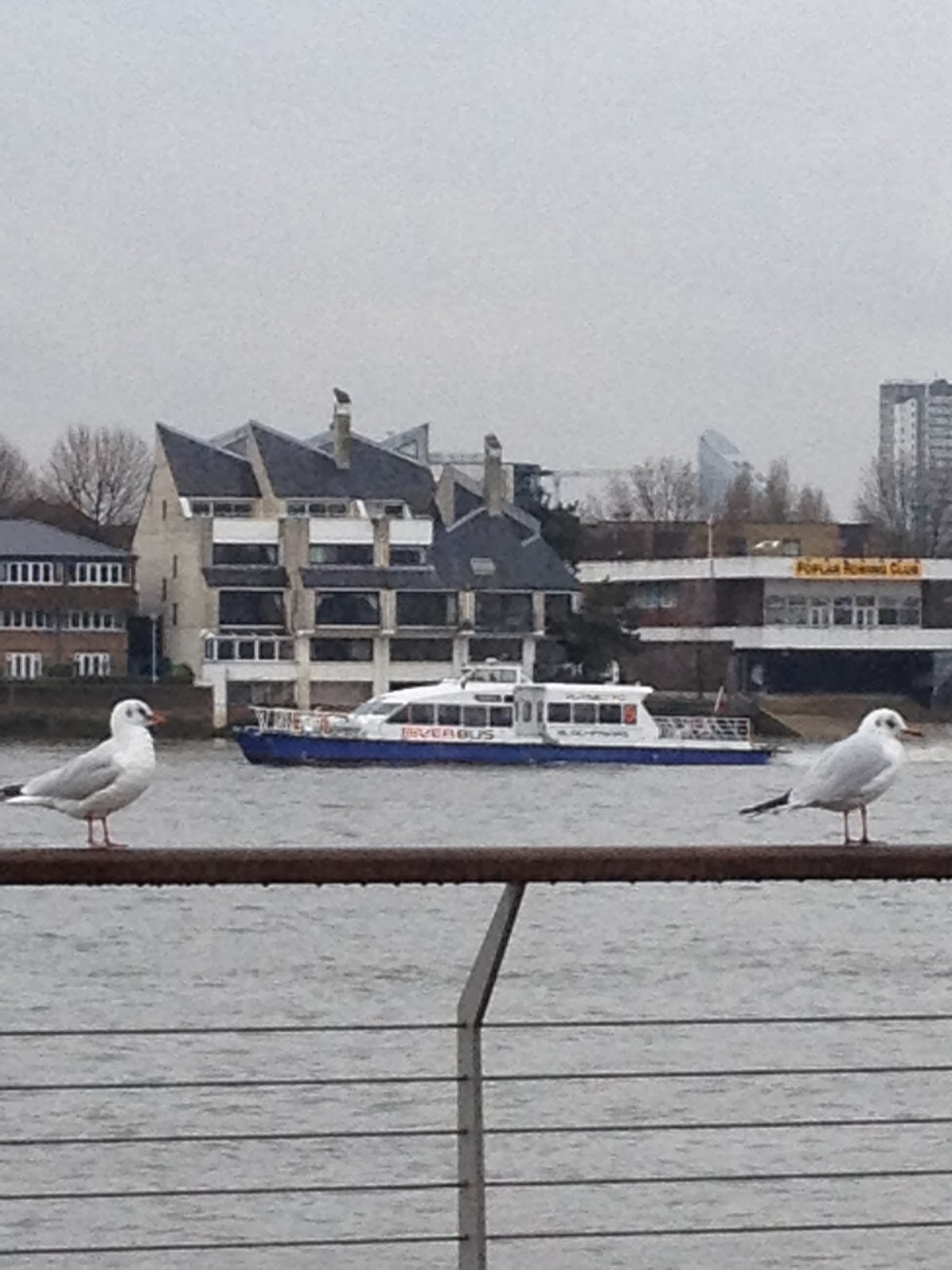 So sorry you had an unpleasant time with the box ticker. I can never understand how people do not respond to small children - what a poor example to set!
That mannequin is quite creepy.

I can remember doing "I'm going on a Bear Hunt" for a drama observation with year 1.Did you see the adult funny book that was out at Xmas called "we are going on a bar hunt"!!Very funny.Keep plodding on.We know you are doing a great job.

I love the photo of Cassie. I thought she looked as though she was waiting for her supper before I read your comment about waiting for treats. I also liked the photo of the 3 gulls.
Seems strange that there isn't a common terminology for what you are working with. She sounds grumpy to me and shouldn't even be doing the job if she can't even be bothered to talk to the children. But at least you don't sound down about it. Have a good weekend.

Teachers work so hard and put in so many hours off the clock and yet, in most cases, are still so unappreciated and poorly paid. Even though teaching is a rewarding career in many other ways I still think there could be more cash for educators and much less for movie stars and sports heroes.

I always love popping in to see what you have been up to!!! Glad the week went okay in the end. Such ridiculousness surrounding education 'people in power'. Ones we see are just the same! Anyway, LOVE the little rug in the box room. The lady certainly appears very appreciative of it. Dear Cassie, she's such a beauty! Have a good week. ROs x

What a nice collection of photos. I like the yarns, I love to make things when I'm not sure how they will end up. I like the little "scene" with the doll best of all. I really do think things have gone too far though in education, in some ways.