This week is actually going quite well. It has been lovely to see the children and people in general seem much more positive than at the end of last term. Positivity is one of my aims for this year along with curbing my hoarding acquisitive tendencies and lightening the amount of things I have in the flat a little. Obviously I cannot become a totally different person, but I can do small things such as not going into every charity shop every week, not buying so many magazines, and using up some (lots!) of the materials I have here. I am happy with my collections of many different things and they do make me happy to look at, draw, and use for various purposes including story telling at school where things have often come in very handy. I will just try to organise some of my things better. I am trying to do a little every day and not worry about the whole thing as that way inertia lies!
I have been finding time to read and to do a little crochet most days. I have been working on this cushion over Christmas and finished it the other night. I made a tube of the hexagons then wondered how to join the ends so I could wash the cushion if I wanted to. I don't know how to make a wiggly edge straight though I am sure there is a way, so instead I added a couple more rows, then crocheted one end together. With the other end I crocheted a long chain, then used this as a kind of lace to do up this ened. It took a bit of trial and error but it worked in the end and can now be undone. 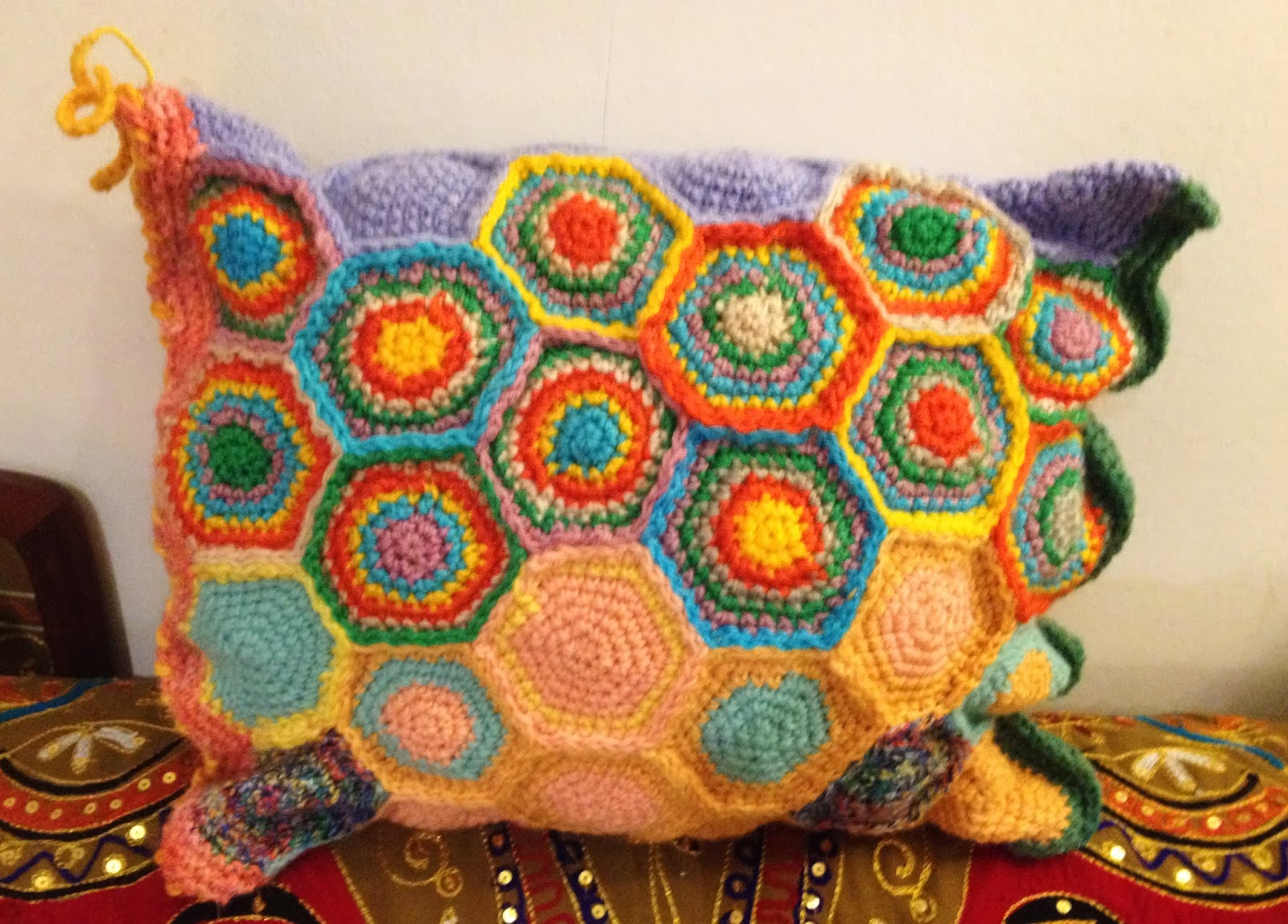 On Monday a group of us went to the cafe in Woolwich-The Coffee Lounge is its name and it does lovely coffee and sandwiches. A water main had burst and I took this on the way back up to school just as my colleague had paddled through it. Talking of paddling, we still have the massive puddles in our playground, though we have the promise of it being sorted out soon. A bit vague so for the minute the poor premises assistant man (and us) have to sweep it and the children who have wellies can enjoy a splash around. 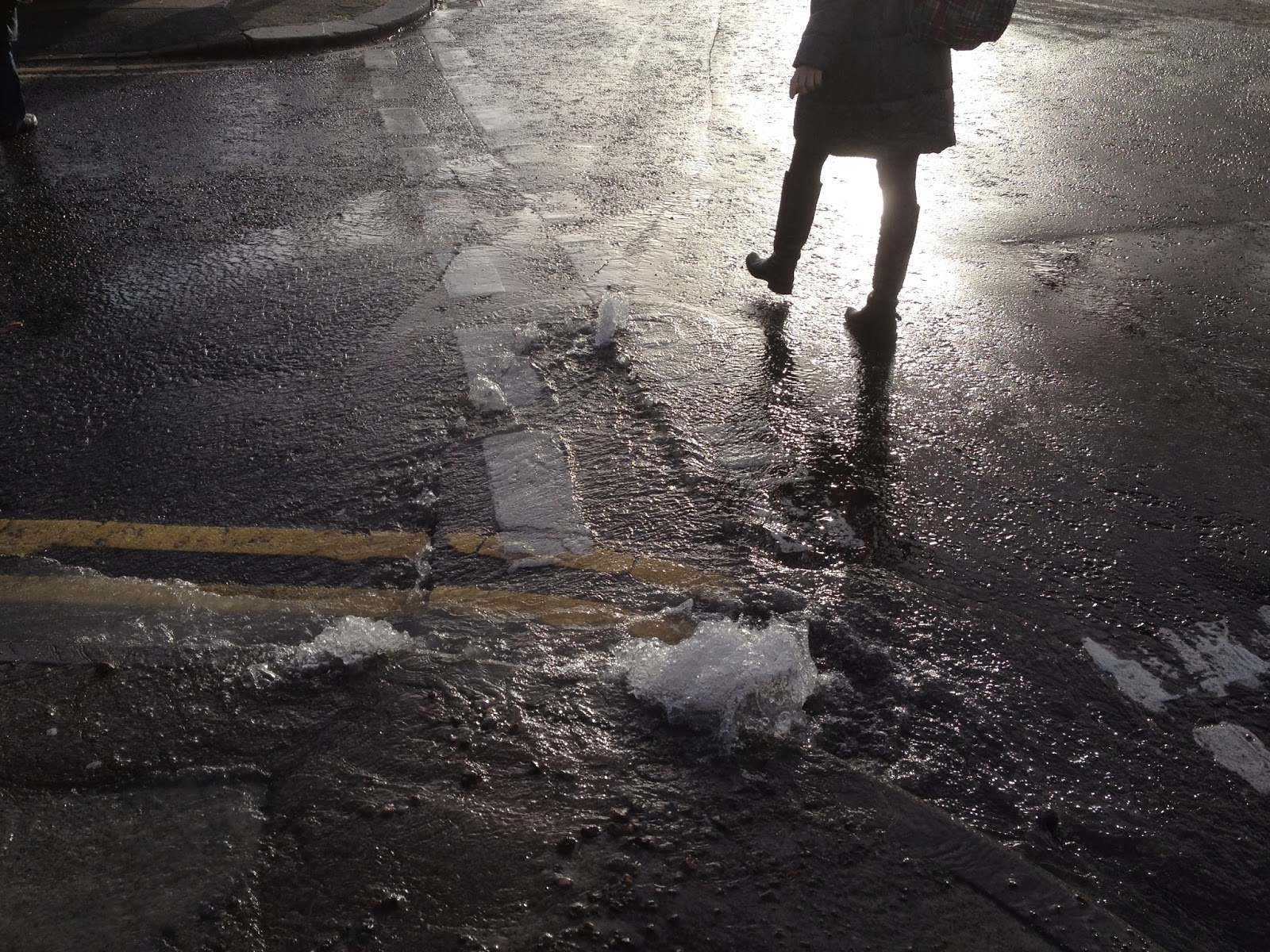 Chocolates. I didn't eat many over Christmas so am making up for it now with some late presents. These are milk tray and only a small box so hardly sinful at all. 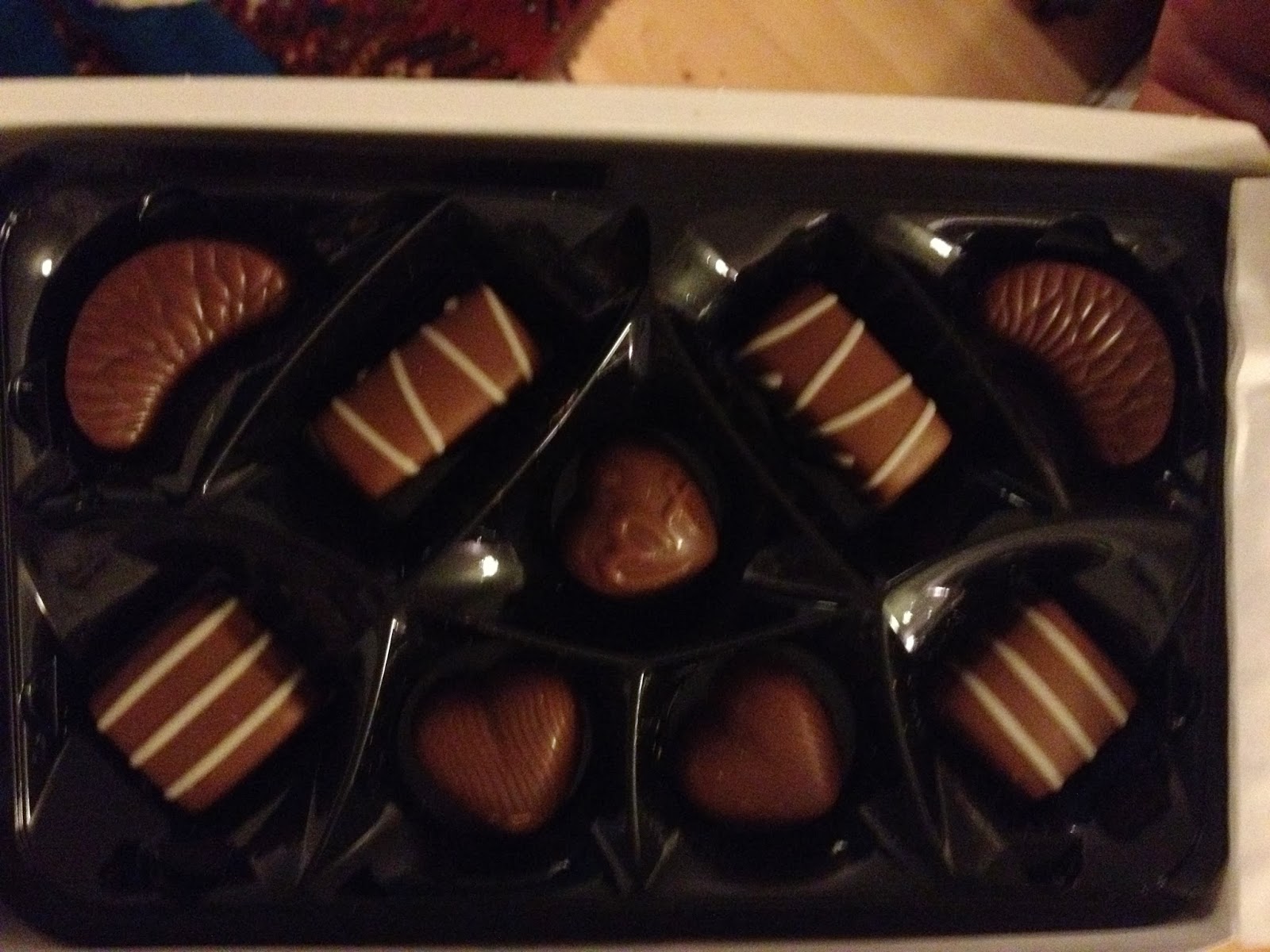 My Christmas tree went last week well before twelfth night as it takes such a long time to sort out and I was still on holiday then. I miss the smell of the tree but not the space it was taking up. These trees have become friends waiting for the bin lorry to come. 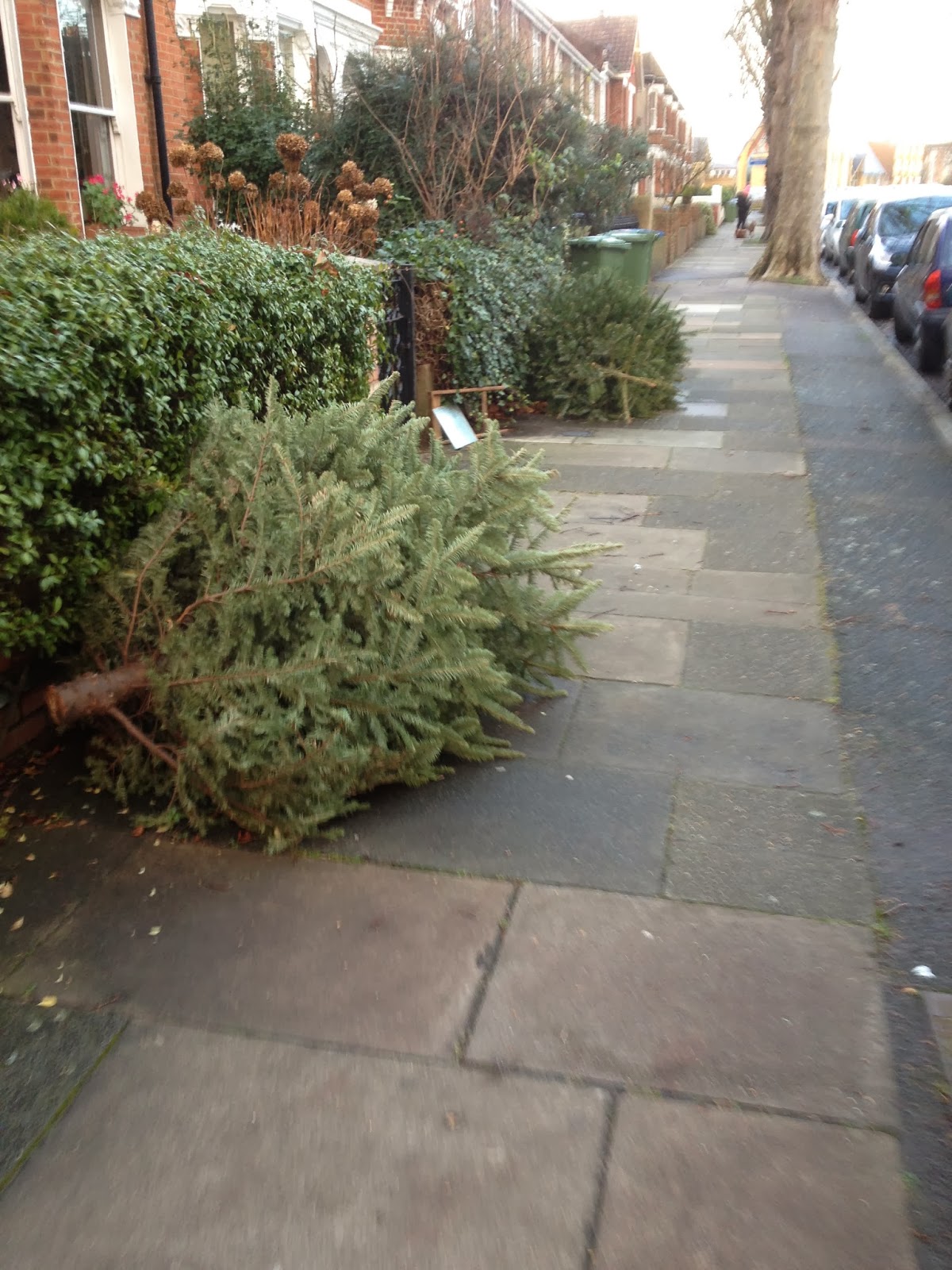 The box that Cassie has climbed into was found on my home visits in September. It is a drawer. There were three of them left on the street so I picked them up and took them away to paint and use for display. I really like them. This one had crocodiles in but when Cassie sat on them all, I emptied it for her. Later on Lily had a go too. When I came home tonight, Cassie was really scared of something. She has been staring out the back window a lot with big worried eyes. I took her outside and waited around to try to show here there was nothing there anymore but she came rushing back in as soon as I went. I have provided an emergency litter tray in case she is too scared to go outside and wee! It may have been a fox or a cat, hopefully nothing else! It would be so much easier if cats could talk and explain themselves. 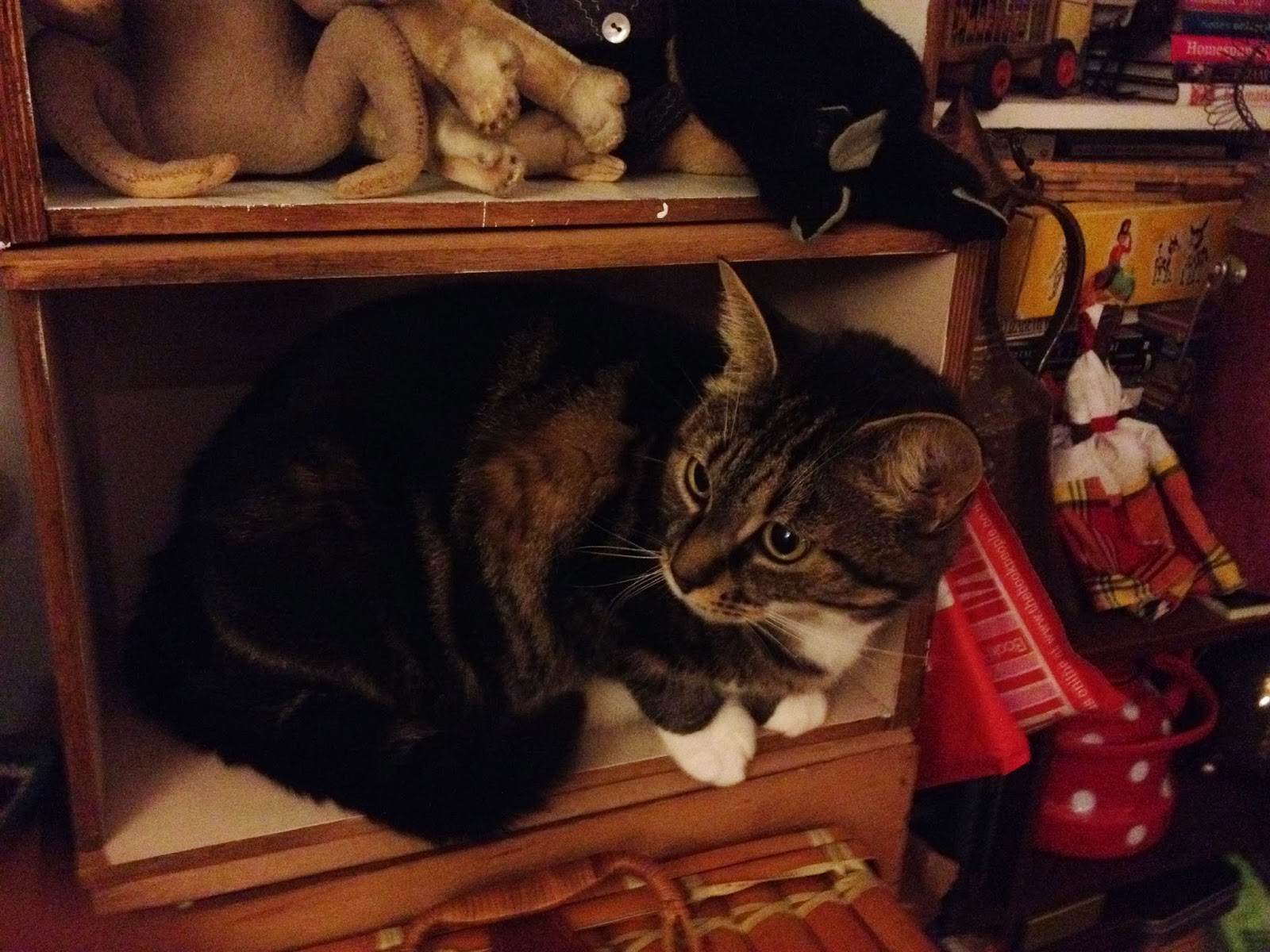 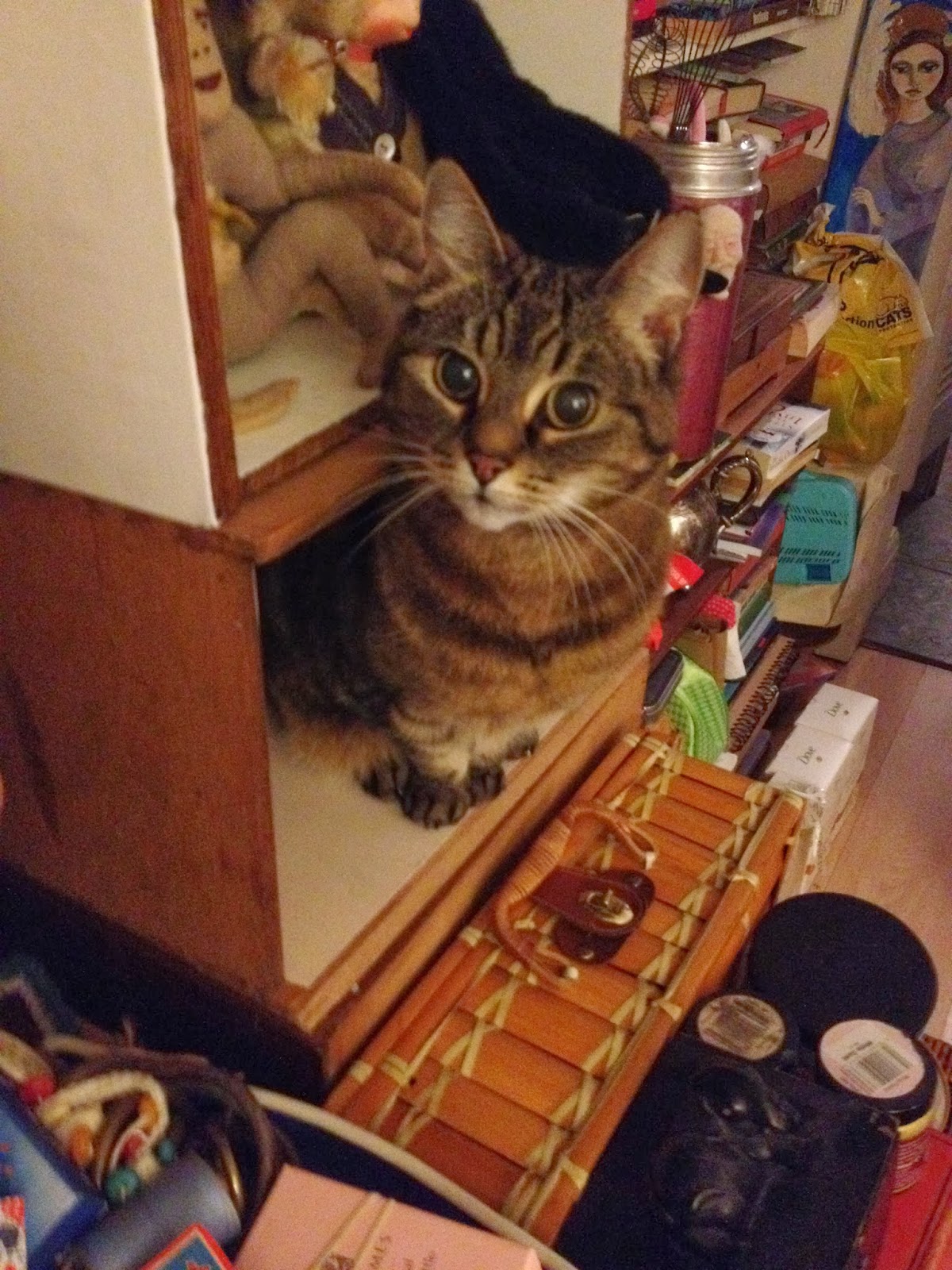 A chair in front of the fire to dry a thick bath mat. The bath mat was dry but the chair became a cat multistory with double access to the fire. 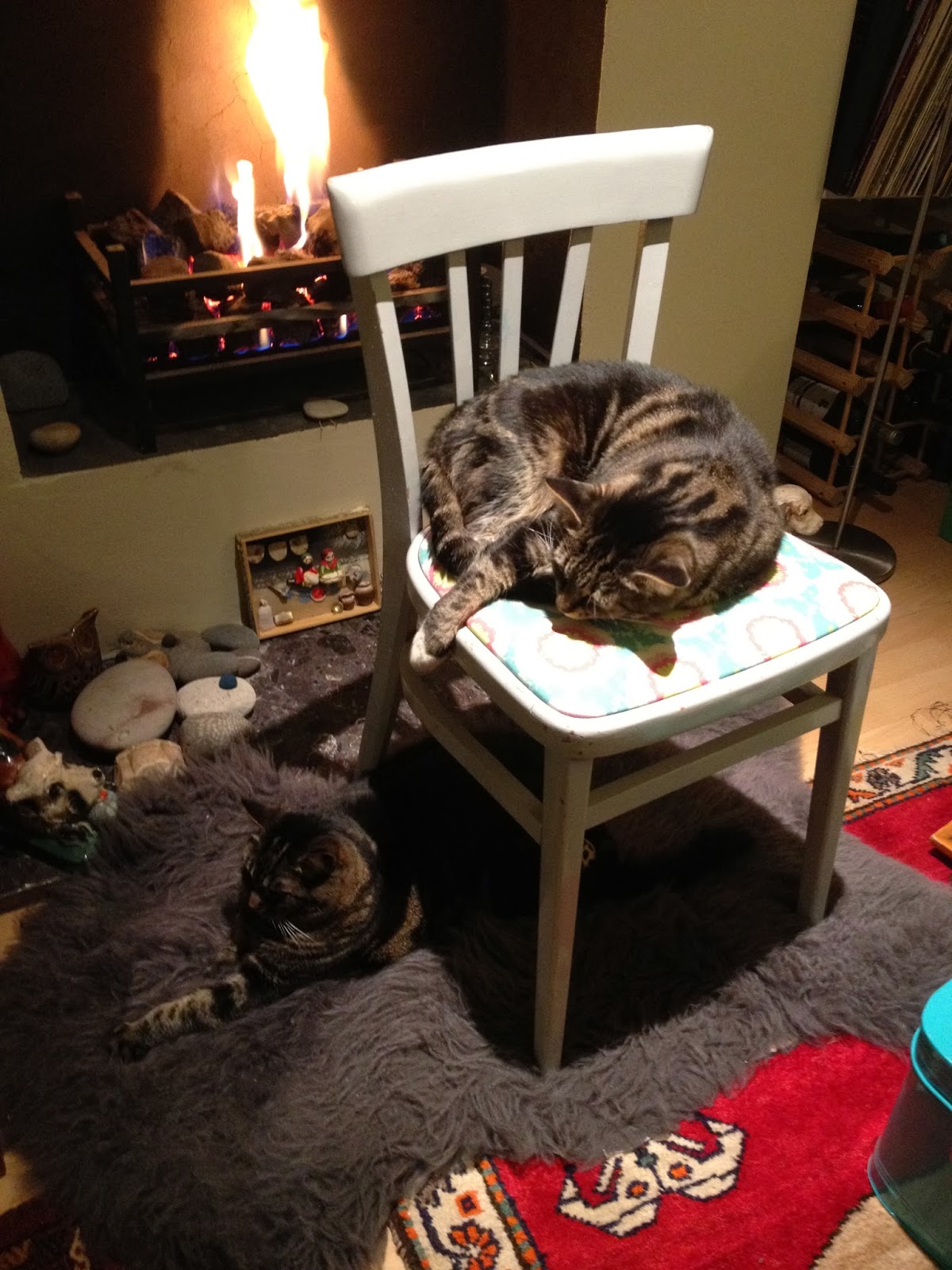 A page in my journal with a pen cat on a posh chair. 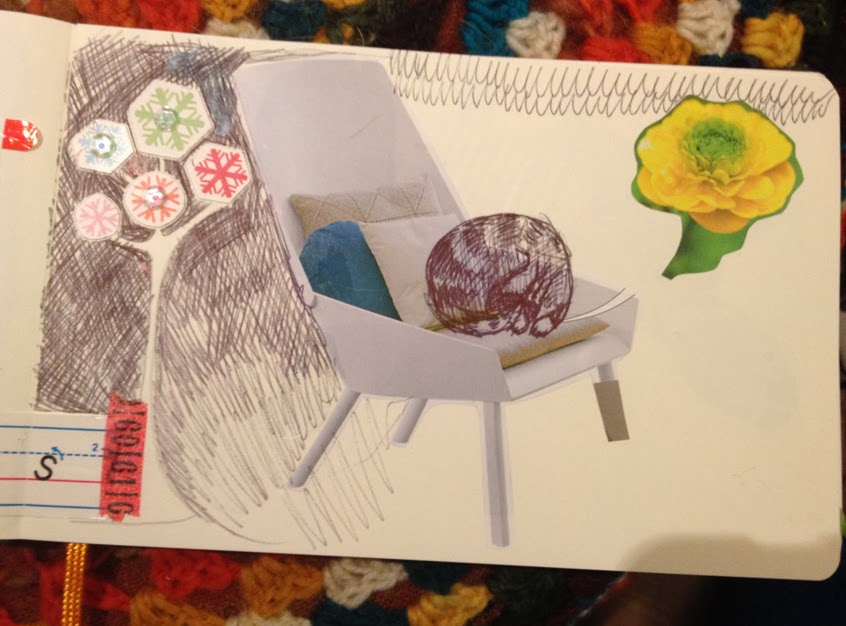 Excellent resolution, staying positive... and look what it has already brought. Such wonderful photographs of these FUN creations, great artwork, lovely sweet kittycats enjoying themselves.
Have a good rest of everything.
Candace, Still In Athens.

Just love, love, love your cushion.
I tend to hoard stuff and end up having too much. I intend using more of my stash of fabrics this year.
Those are lovely photos of Cassie too, those big round eyes, beautiful.

The work you did on the cushion is super. I like how you finished it. The photo of the street looks very artsy even with the hunks of ice. It would be very interesting to be able to talk to one's cat companions. I'm pretty certain if they chose to speak that their conversations would be very intelligent and insightful.