Cheerful is not exactly how I feel. But positive and determined despite continuing repercussions from last week's observation. I had already planned to move my writing and mark making area but had not had the time to do so. I started tonight, only to be called to a meeting to be told all the same things I have been told via email and in the feedback last week. The meeting lasted over an hour. I also got my written feedback. It suggests that I am not challenging children sufficiently, nor using my observations to plan next steps. It also says that there is not enough evidence of children's learning displayed. How they could tell, in a twenty minute observation when I was not even present, that I am not using observations to plan and teach I don't know (well actually I know how they thought they could tell-it was because the planning wasn't annotated. No it wasn't, because it was only half way through the second day back, and, believe it or not I don't annotate my planning every five minutes, and, in addition, a lot of it is in my head relating to what has just happened, and I may not always find time to note it down, or need to. It may well become part of next week's planning too. But to make a judgement based on one small element of everything I do does not seem valid to me). I try very hard to individualize planning and to use what I find out through assessment to plan next steps. Their view of my planning was not mentioned in my verbal feedback. Also there is a maths display I did just before the ofsted which consists of photos of children playing in a mathematical way, with comments showing their learning, and some evidence of how I used their play to promote mathematical learning or plan next steps. On the neat little table at the bottom of the observation there is only one tick-and it is in the 'inadequate' box-relating to progress made. If they had sat down with me and looked at my tracking they would be able to see the progress made. I am not sure what to do about this as it is a written document and I feel it is inaccurate and quite damning. Yes the mess is not too serious and can be altered but if they are saying that my teaching and planning is not good enough then I am not happy about that because I feel it is. I think I will talk to my union rep, not to kick up a fuss but just to put it on record with her that I feel it is an unfair judgement.
Thank you for all the supportive and helpful comments and I hope to stop ranting soon. My colleague asked me today if I would like her to build me a bridge/ Why I asked-'so you can get over it!'-good advice! The way I am choosing to get over it is to do the positive things I had planned anyway, not to let them knock my confidence, and, ultimately to prove them wrong!
Below are some cheerful yellow roses. They are in a lovely little rose bowl from a charity shop-for once not bought by me, but a present from another colleague who probably has an even bigger charity shop addiction than I do! I really love the bowl and the way she knew just what I would like. She also thought it would be good to put the flowers in that the children are always bringing me so perhaps I will take it into school for a while once the roses have had it. 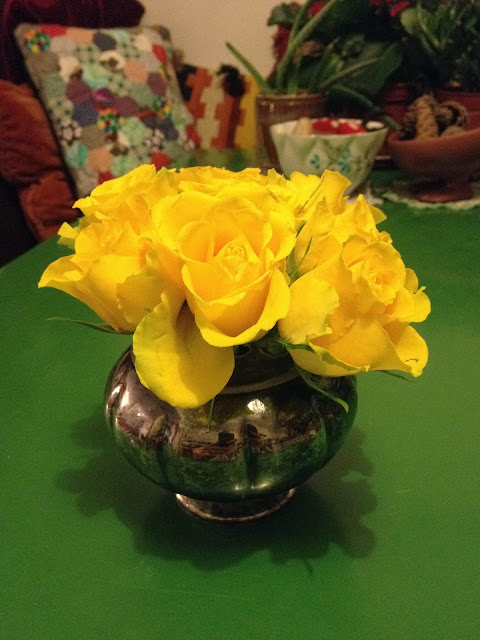 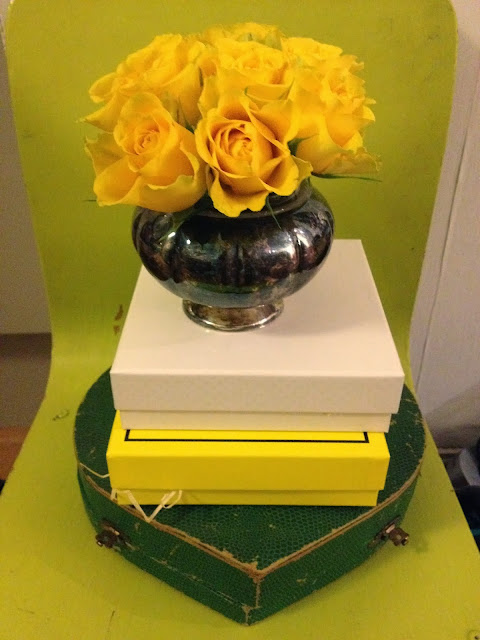 I suppose you would lose your standing as a proper british citizen if you said something like " respectfully, sirs and girl sirs, y'all are full of bullshit"...That's what I would say and then I may give them the NYC salute. Such nonsense, I should just come over and sort them out...you may not have a job but, oh, the satisfaction....

Yes and I will come with her and then there will be trouble! And then you won't have a job anymore and we could go on a jolly good holiday.

Sorry to hear that life is being unjust to you at the moment. I've always thought you are a brilliant teacher. There's too many ticking of boxes these days. I just wish the authorities would see that and consider the bigger picture instead.
I thought the flowers were daffodils. I obviously hadn't looked at them properly. Such an uplifting colour, whatever the flowers. What a lovely gift from your colleague.

Ok, coining a phrase...YOU GO GIRL! How absolutely ridiculous those in authority choose to make observations! Apparently they have an agenda! Take care Sarah! Hope this gets better soon!

As I told you before anything to do with administration gives me a migraine. The more I thought about the whole "military" inspection I wondered why they didn't write that your shoes weren't shinning too?

They need to get a life, or rent one.
Obviously too eager to criticize and too slow to compliment. Arghh/