Desolate was the word that came to mind when we went to look at the river on Sunday. There are lots of industrial nowhere roads leading down to the river and we drove down one. We cycled along there years ago and there are some houses and a pub. Then you get to the road between the river and the yards containing various river focussed industrial enterprises-piles of stones from where I don't know, which are loaded onto boats to transport. ( I think!) It is a run down area but quite frequently used by cyclists and runners, and probably people going to the pub. We only parked for a short while so I could take a few photos. There was a small section of shore down some green and slimy steps.There was a view of the barrier one way and the dome the other. The barrier has been closed a lot in the last couple of weeks due to all the storms and high tides. It has only been closed something like 130 times in all the time it has been around, but 5 more times recently. 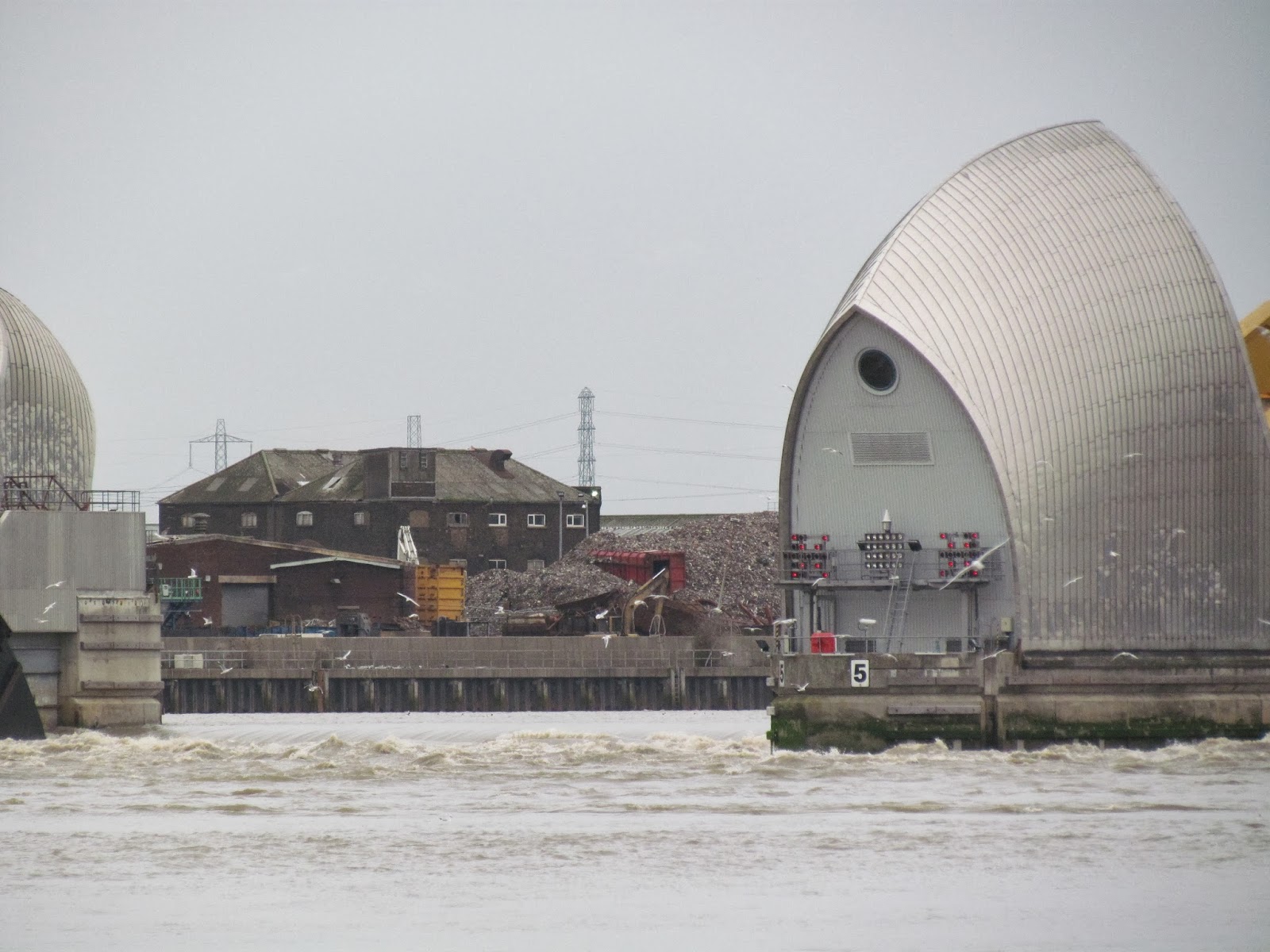 A glove and a pipe doing an impression of a severed arm. 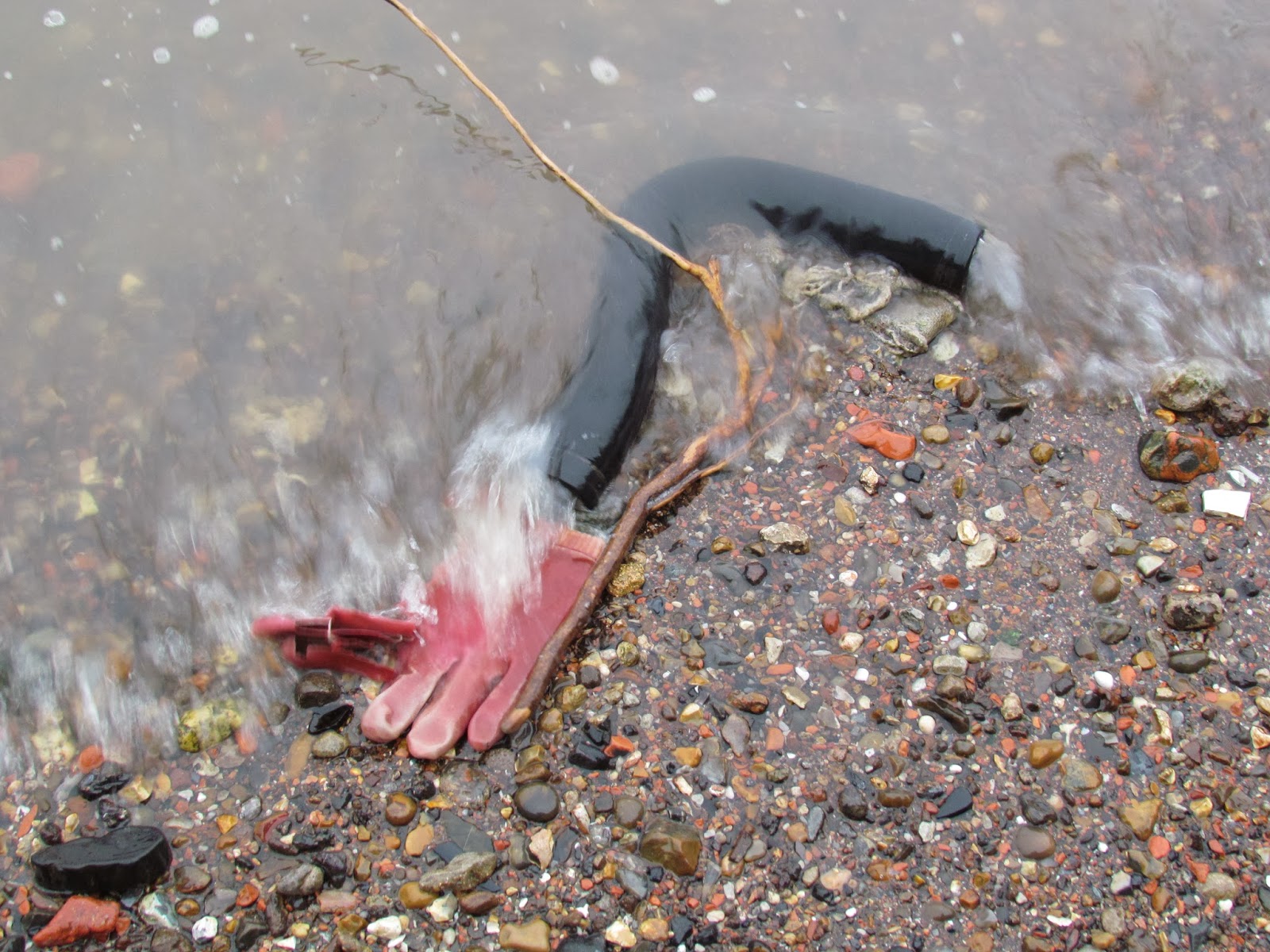 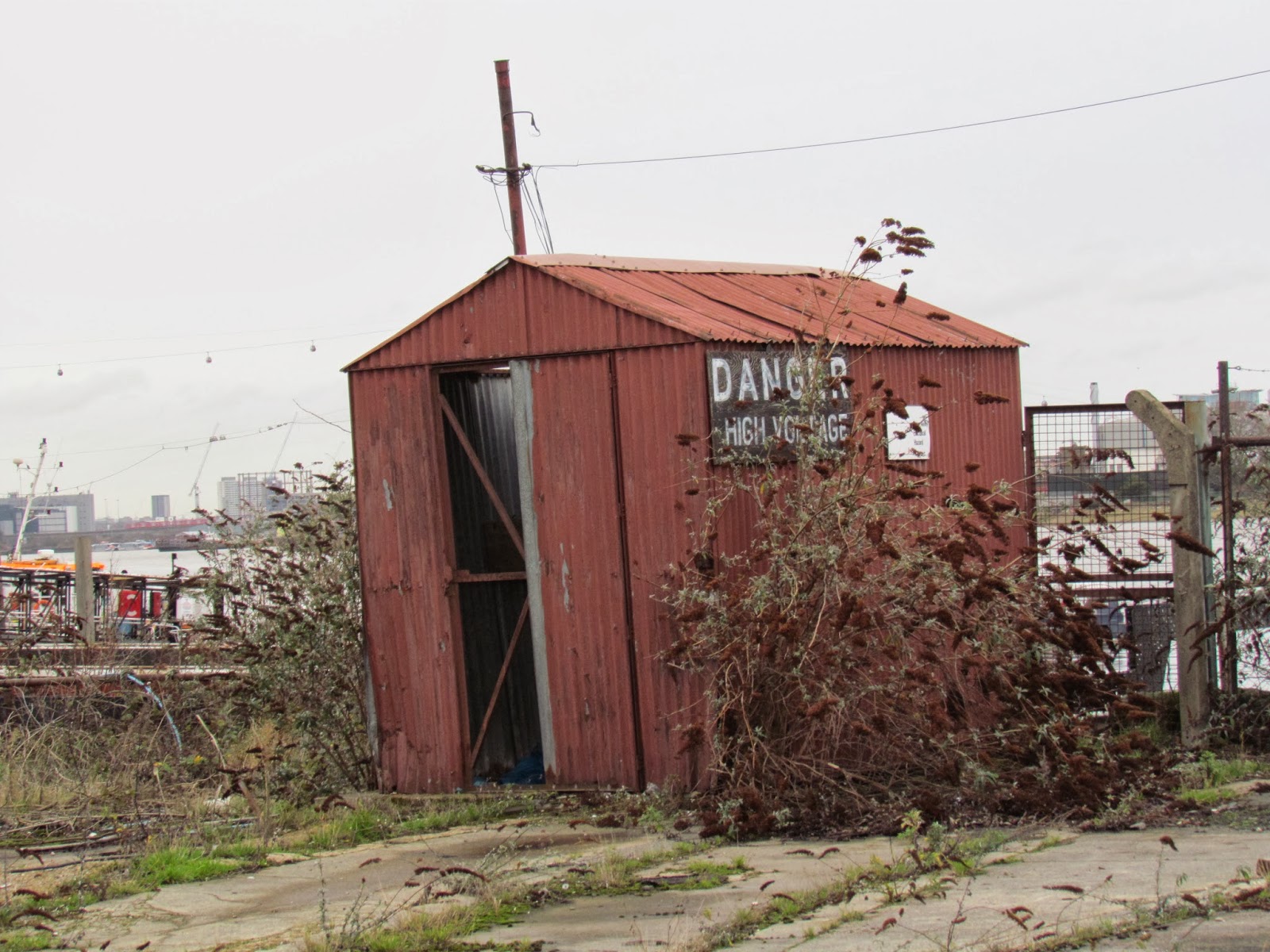 A beautifully faded 'No Parking' sign to add to my collection. I wonder who Durham Jetty Estates were and what they did. Some interesting pictures of lots of rusty beauty here on Derelict London. 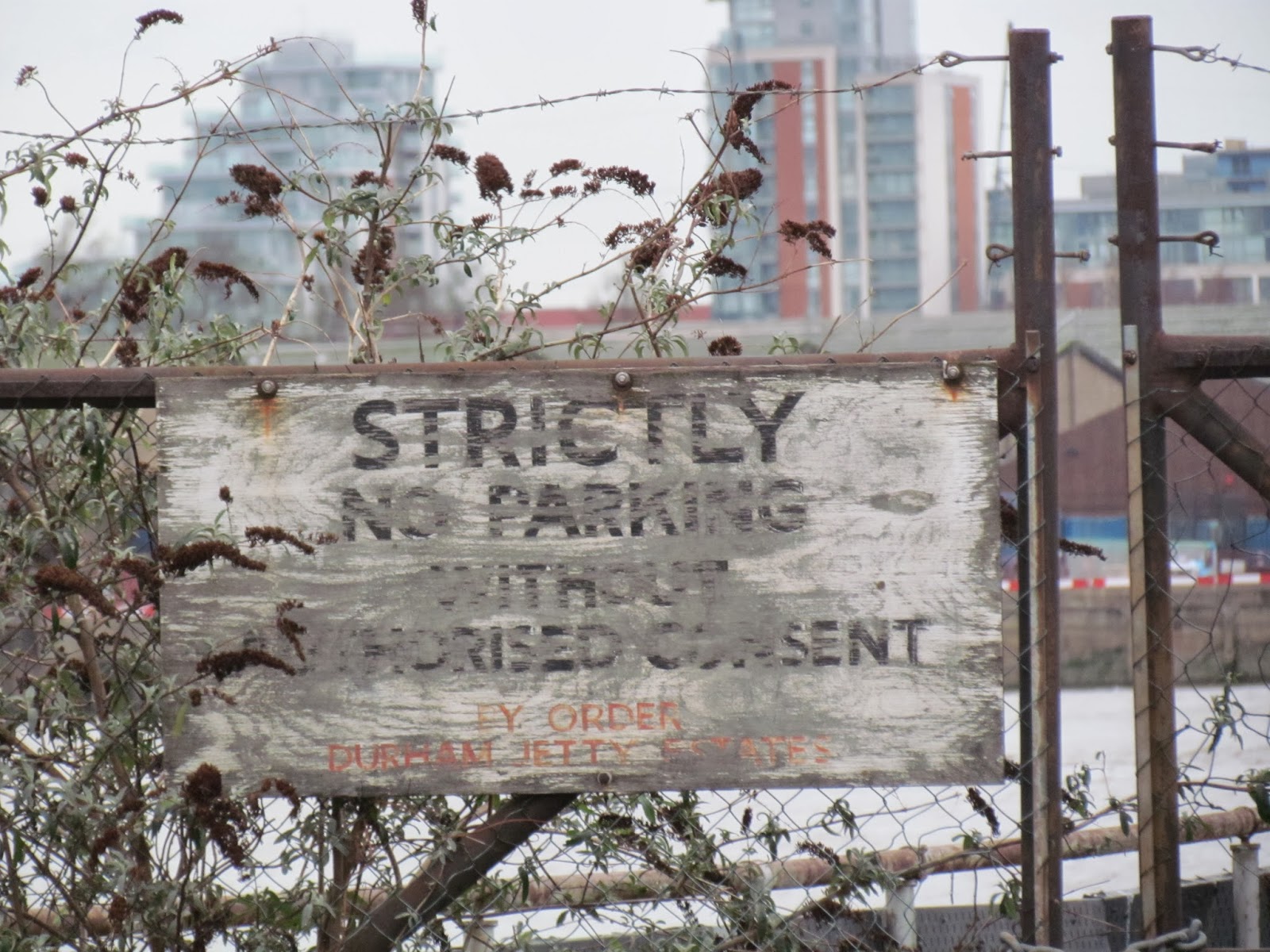 A view of the dome through the ever present Buddleia. 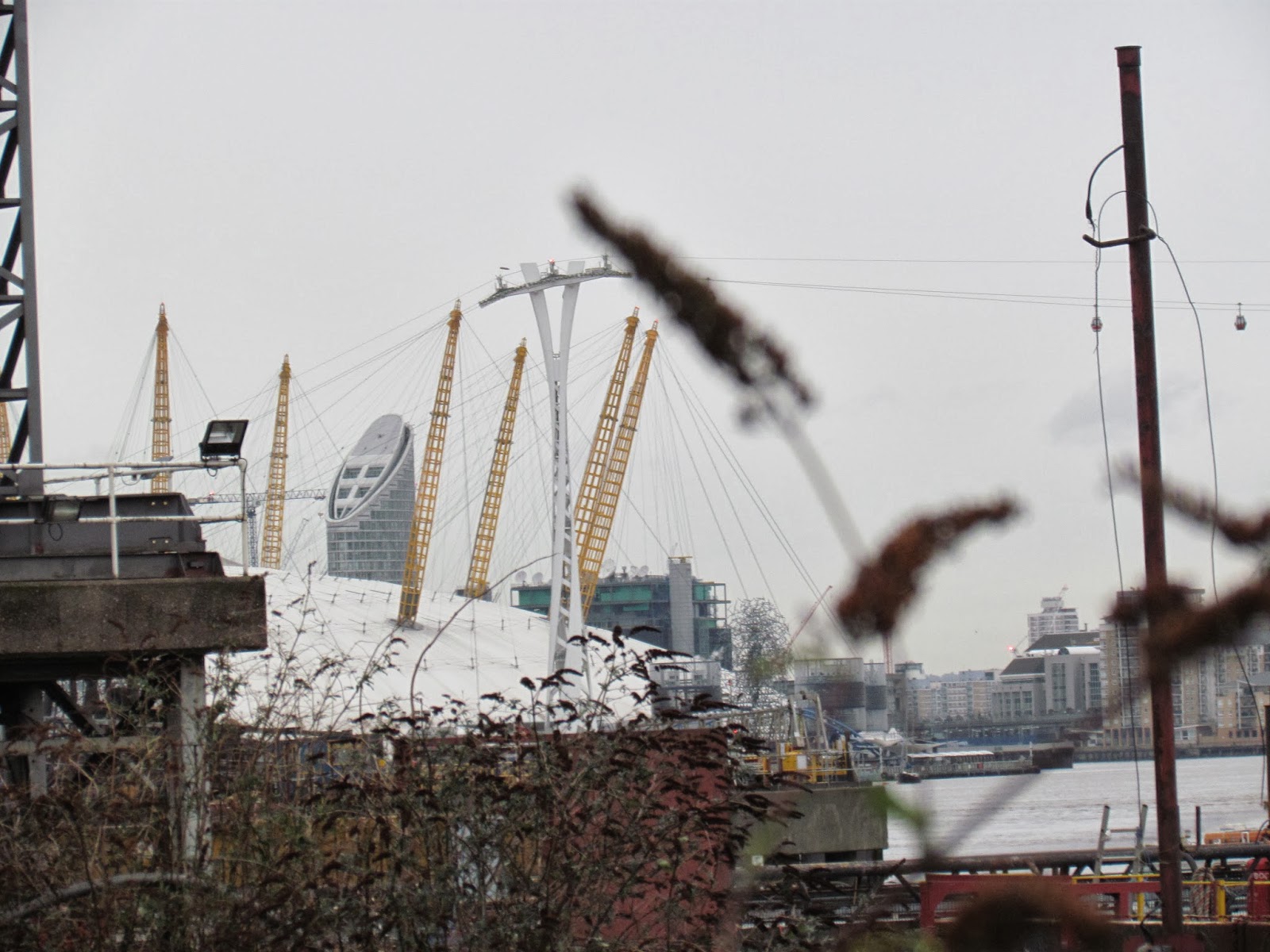 This building looks pretty run down but I think it is occupied and by the looks of the yellow light someone was in. 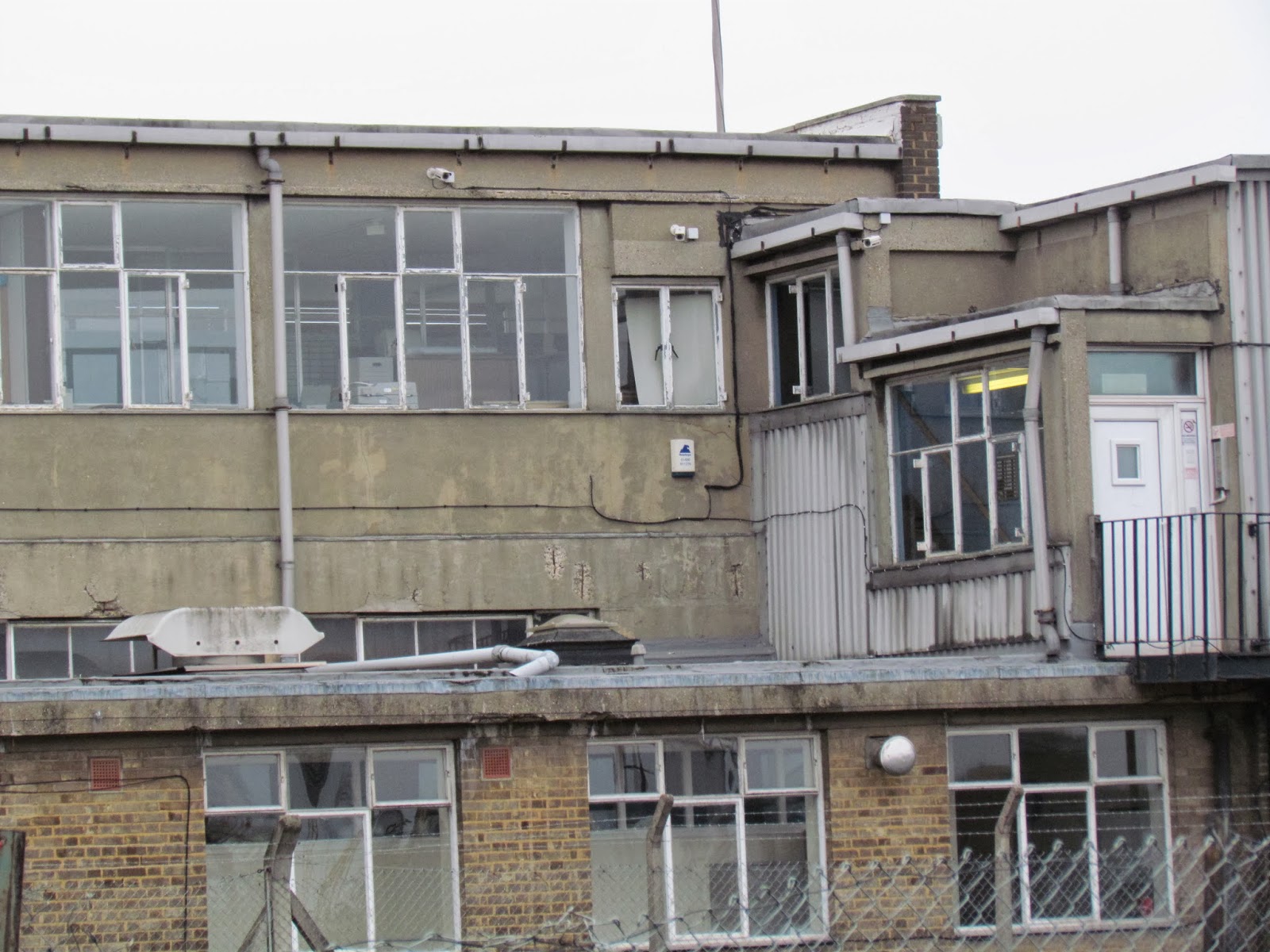 Maybe we will visit somewhere less desolate soon!
Posted by Sarah at 12:55

Happy New Year! I love your photos and your commentary. I saw a bit on Breakfast on BBC this morning (while I was on the rowing machine!)about the Thames Barrier, and how many times it has been raised in the last few days. The man in charge of it reckons it will continue to perform until 2070!

hope the weather hasnt been too bad where you are. stay warm, dry and safe.

In Y there are lots of 'ghost' advertisements -paintings and letters on the sides of buildings advertising shops that are no longer there.
I think someone once made a collection of them.
The Thames does have its depressing side too.

Your photos and adventures get better and better! The severed arm was great, lol... so interesting, the images we can "see".

Have the best ever New Year. Stay positive, you have a wonderful life.