Picketing outside the school gates-just me and my friend who is the union rep. Some of the other teachers were going to meet her on the march which I didn't go on, but I am glad I turned up to picket with her or she would have been on her own! I have never picketed before. It was quite fun. We handed out leaflets to the parents of children who were in-not all the classes had striking teachers so they were open.We chatted to the  staff going in and to the head. It was all very amicable. Striking is not done lightly but that doesn't mean it has to be horrible. The main points that are at issue remain-working for longer, paying higher pensions, no guaranteed pay progression and increasing workload. Ages ago I worked out the hours I work in a year. I get paid over a year based on 27 and a half hours every week, which includes all weeks. I worked out that I work roughly 37 and a half hours over all the weeks in the year. I am owed thousands! 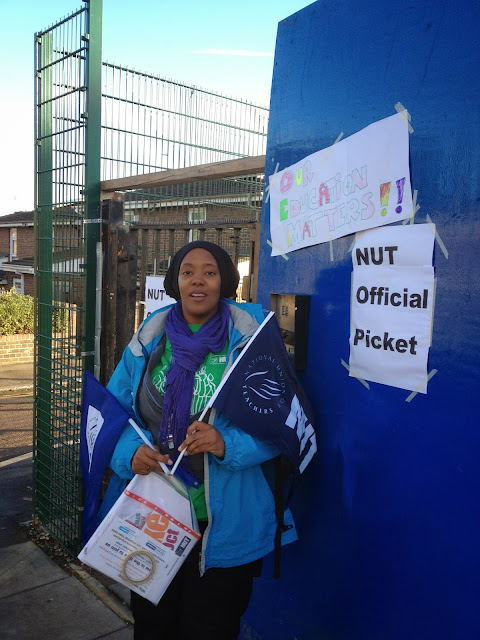 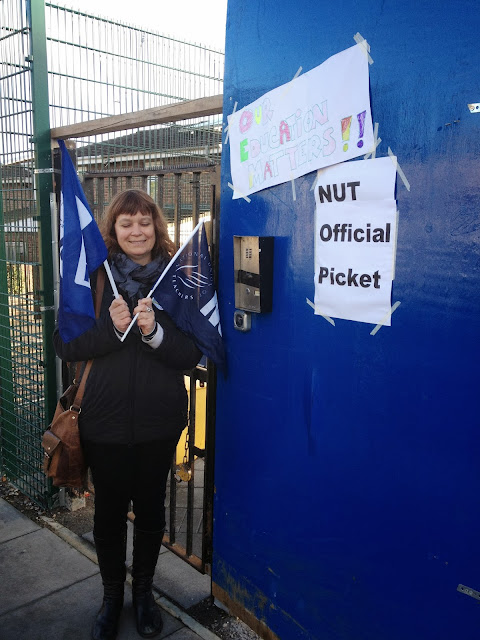 After the picket I had planned to go home, do a bit of work and then go out to Greenwich later, However it was such a lovely morning that I decided to do things the other way around. I drove to the park and as I did, I saw the geese gathering on the heath. So I parked near the gates and walked out to take photos of them and the wild flower verges the council planted after the Olympics. Or nearly wild. Very pretty with lots of pink and white cosmos. 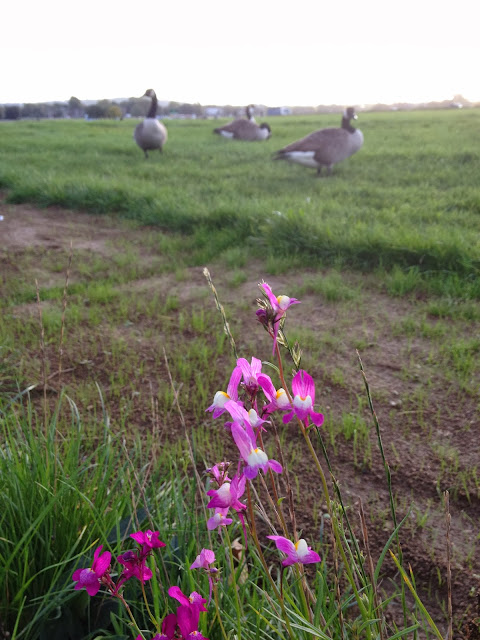 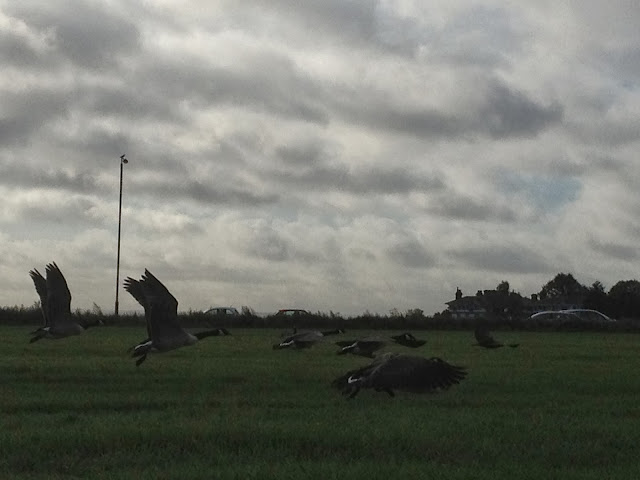 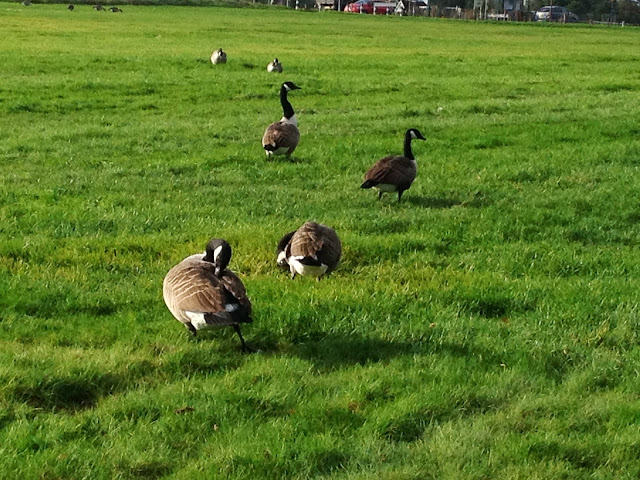 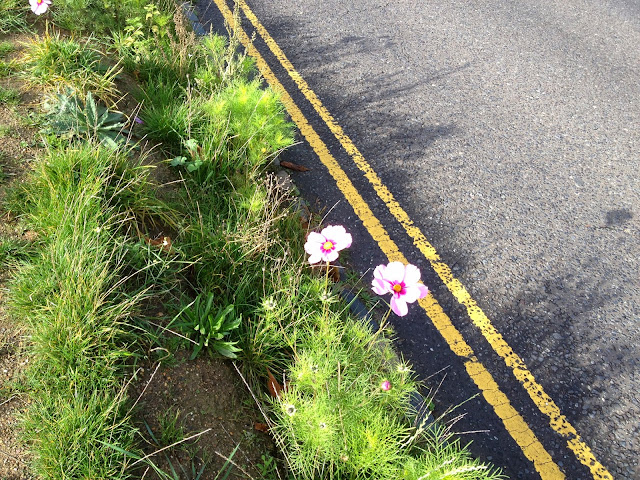 Then I walked through the park via the rose garden and Ranger's House. It was lovely and made even more so by the fact that there was hardly anyone there. You don't get that at the weekend unless the weather is particularly bad. 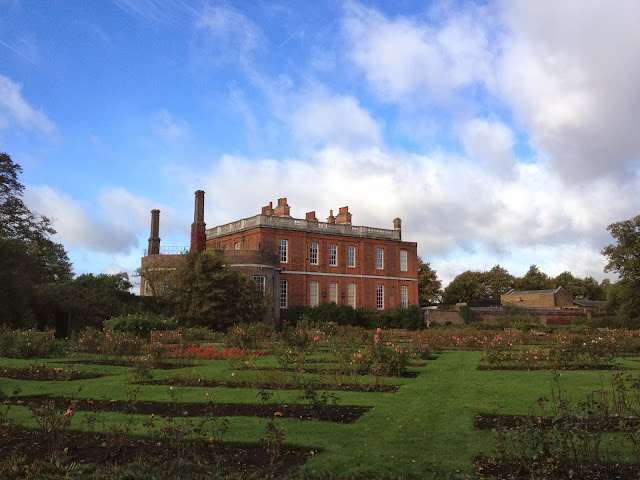 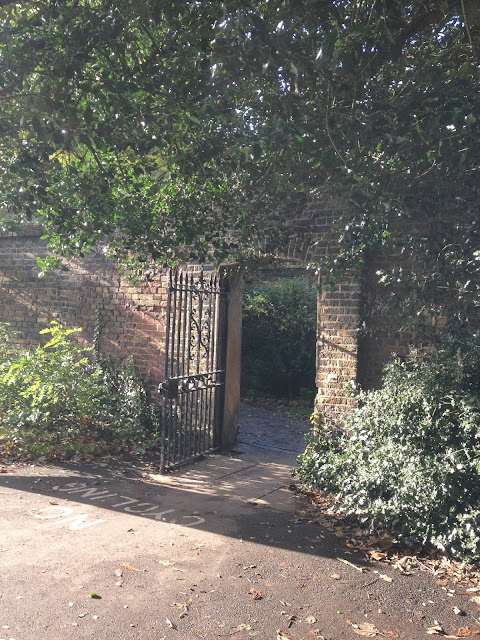 I would love a garden with a gate like this in it. Or leading to it. This one leads out of the park. There is scaffolding on the Observatory. It looked beautiful shining in the sun. I walked past the Henry Moore statue. It went away for a while and then came back. I hope it stays. It is where Moore wanted it to be. 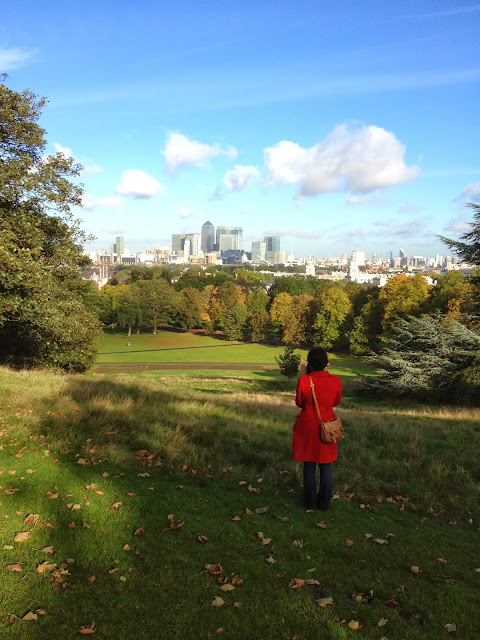 Just nearby was this woman. I couldn't resist taking her picture as her red coat made such a great contrast to the green. She was taking photos of the view I think-something on her phone anyway. She seemed totally unaware of what was going on around her. I feel pretty safe in Greenwich park but however much I am enjoying the surroundings I am still aware of potential dangers. I felt a bit worried for her. 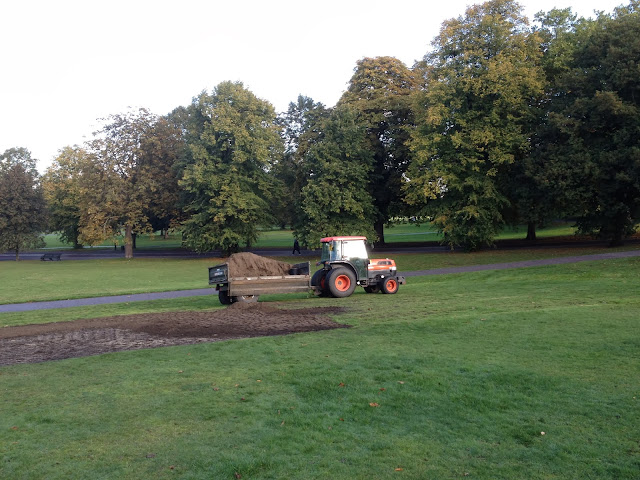 This cheery tractor was resting, waiting for its man to come back and spread some more of that lovely topsoil around. He was there later when I walked back through. 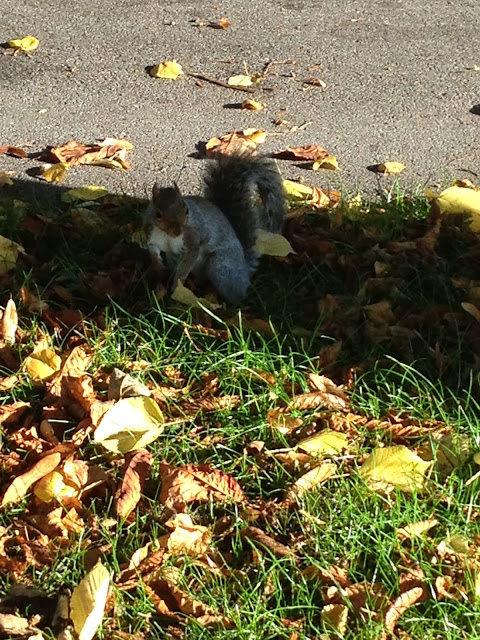 This busy squirrel seemed quite worried that I may steal his buried nuts. I saw a nature programme recently that showed squirrels pretending to bury their nuts in one spot, then sneakily moving them to fool other squirrels. They are clever little things! 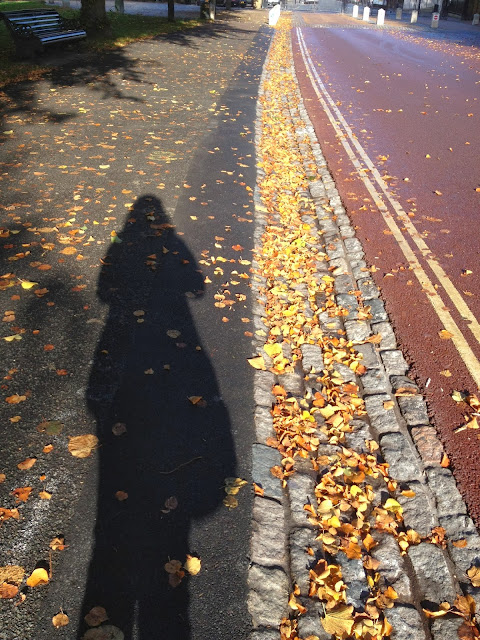 A golden shining path of leaves leading to the market. 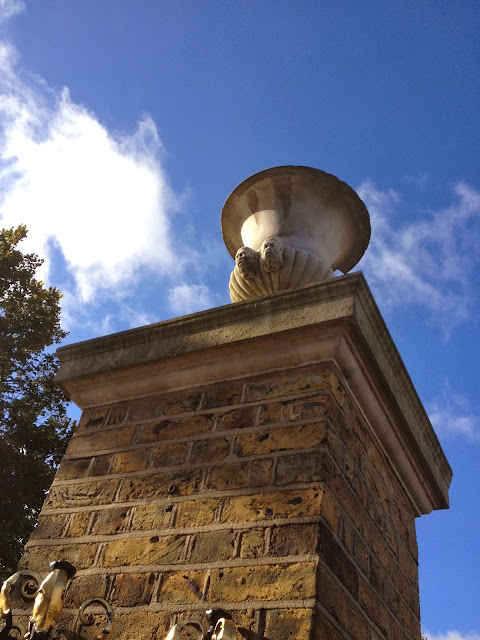 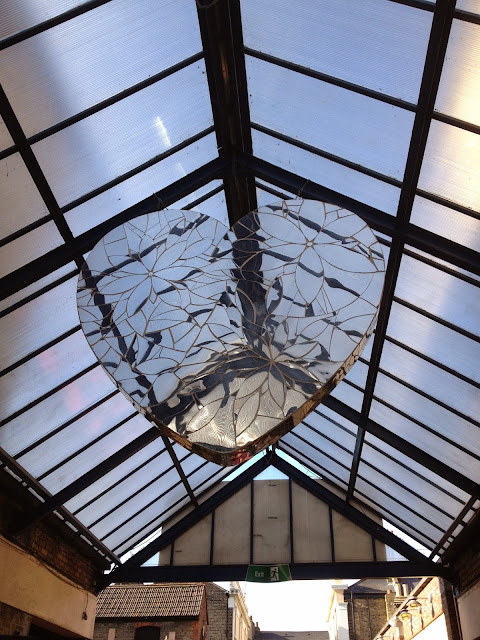 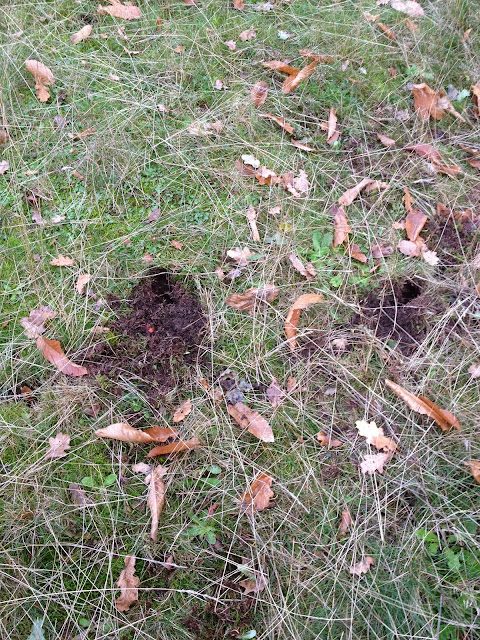 Squirrel holes? There were lots of Chinese people in the park foraging under the sweet chestnut trees, their carrier bags bursting with them. As I walked around I felt very peaceful and happy. A brief respite from the mad week. It was good to see things I would normally miss, and not feel under pressure for once. I did come home and do my work in the afternoon but I didn't have to I just chose to. 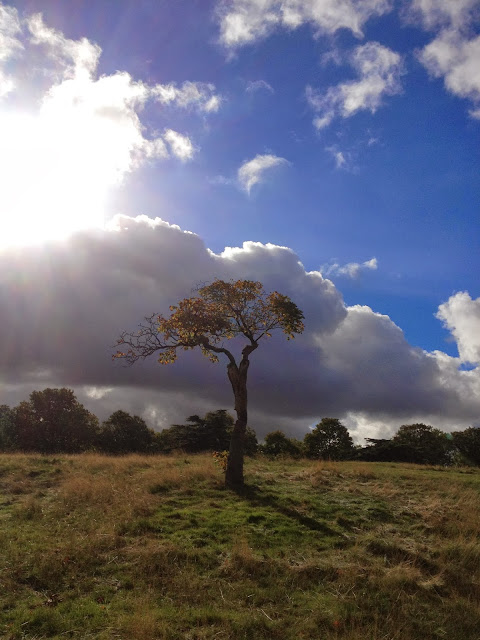 I loved this tree against the sun. So dramatic looking. 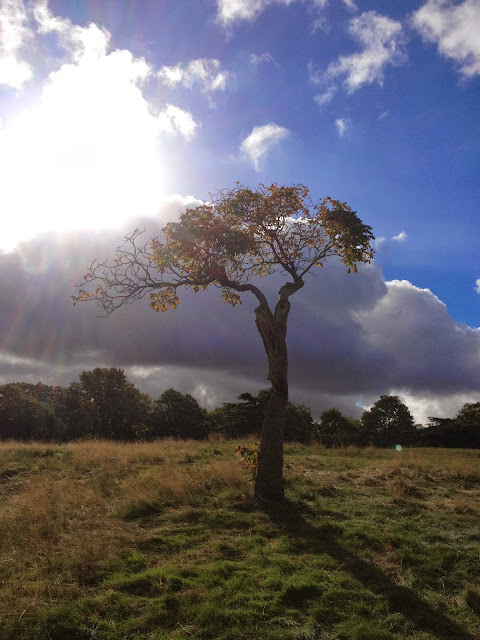 It is a wreck when you get close. 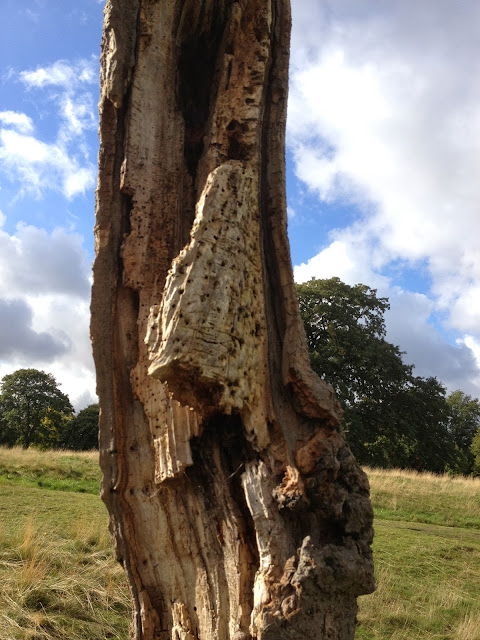 Amazing it is still standing. 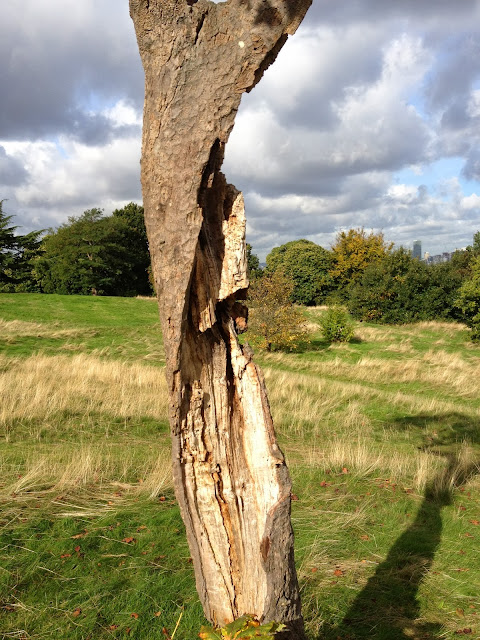 Later on I saw this sign which, with its orange netting is just the perfect choice for the season! 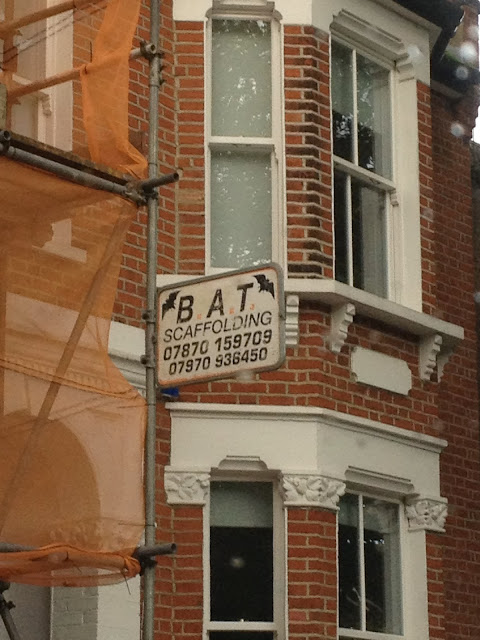 Thank you for sharing a most lovely afternoon in Greenwich Park!
Yes, teacher's hours are not at all as posted.....
who knows how many hours I spent looking at papers when I had about 130 students per day....and I was meant to teach them how to write....

Good for you, standing your ground and letting people know about the needs of teachers. It's sad that educators, who hold the future of our children, get so little appreciation while sports celebs are showered with more money and stuff than they can handle. Fun walk. Loved the squirrel

Yes, to striking. Here in NYC, it is illegal for teachers to strike which is ridiculous to me. Teachers work so hard. They deserve a lot more money than they get.
The Ranger house and the gardens you showed are beautiful. Wow..wish I was there with you taking pictures.