Holiday Pets and Other Animals

I really miss the cats when I am away, so it is lovely to find a substitute pet for the holiday. This little white dog was that pet. He ran to greet us as we arrived, and saw us off every time we went out. He loved to be made a fuss of, and would rest his chin on your arm so you could tickle him under it! Such a sweetie. He was not the only dog in the local area. There were some big, scary and locked up doberman/rottweiler crosses, a big black dog who I think was a Barbet, who was very old and just stood in his garage, and a little Papillon dog, who got braver as the week went on, and who was the little friend of our dog. I wish I knew his name, but we didn't meet his people, and he would only run into his house next door at the sound of clanging bowls. He had a territory of a square of four roads, and would appear from any direction within this area. 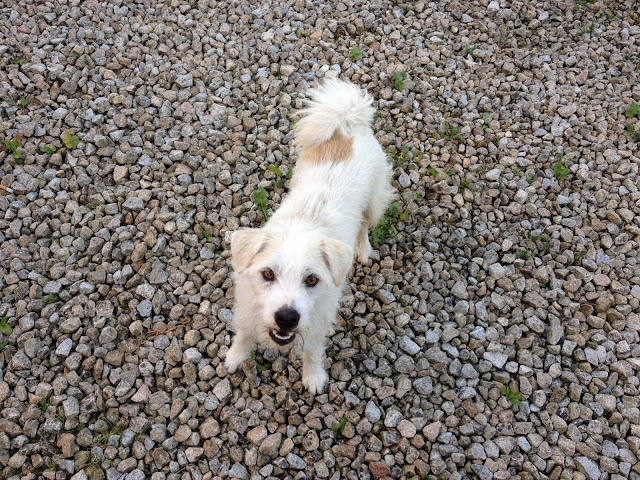 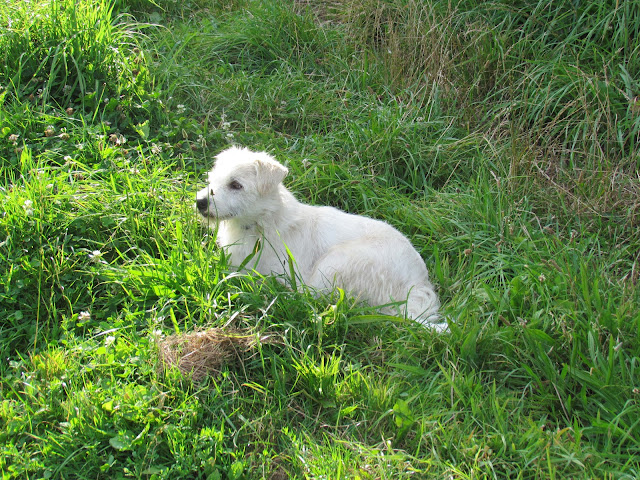 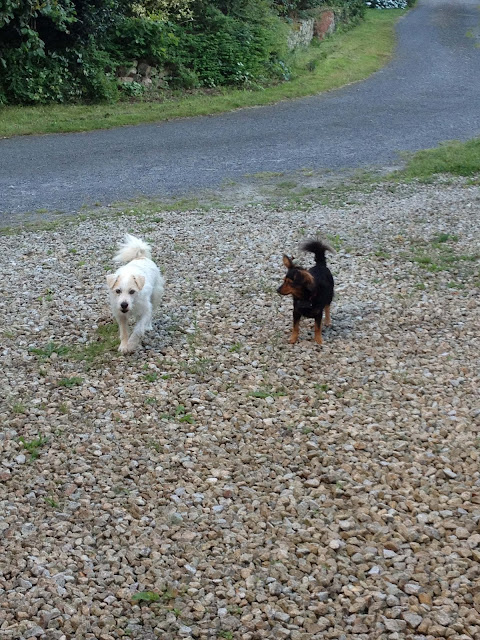 An admiring glance from the little friend Papillon, as both dogs rush towards me. Patting the little dog was not allowed, and caused  growly cross noises, and running in front of my hand to prevent the move! I didn't try after that as I didn't want to cause a fight. It reminded me of Tiger's jealousy when we are playing or making a fuss of either of the other cats, especially Cassie. She always rushes over and muscles in. 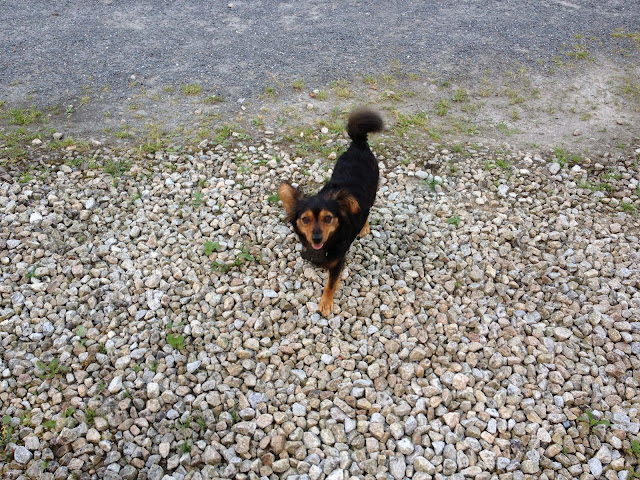 Little friend appeared on his own one day-so brave! This time he got a pat. 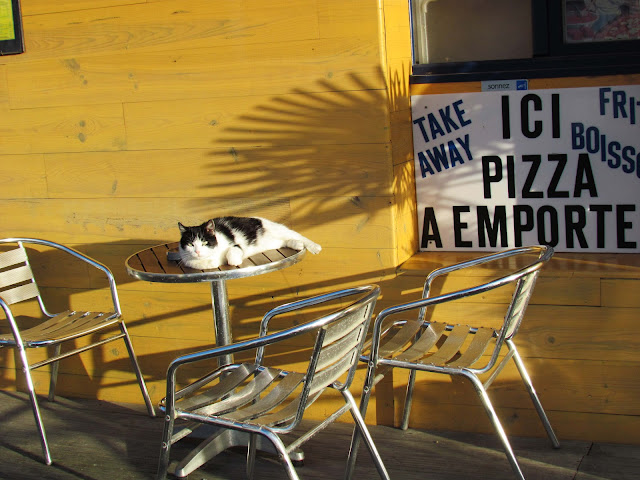 This is Chardy, the restaurant cat. My first name for him was Stumpy Joe, but on the third and last night that we ate there, the little girl,  Atilia, told us his name. 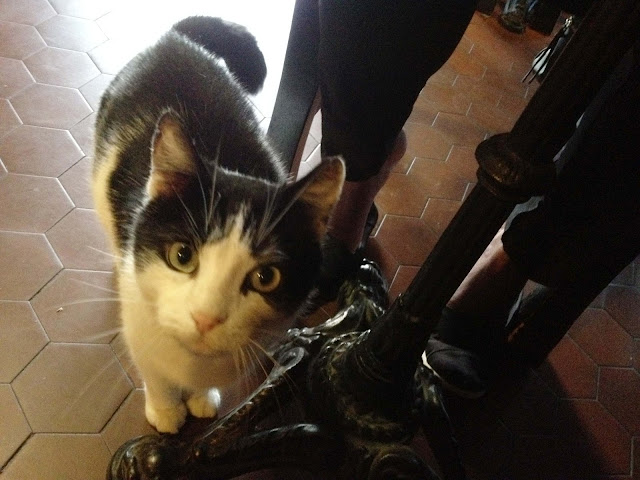 He was very friendly. We didn't find out what happened to his tail. According to Atilia he had always been like that.
Now onto the other animals... 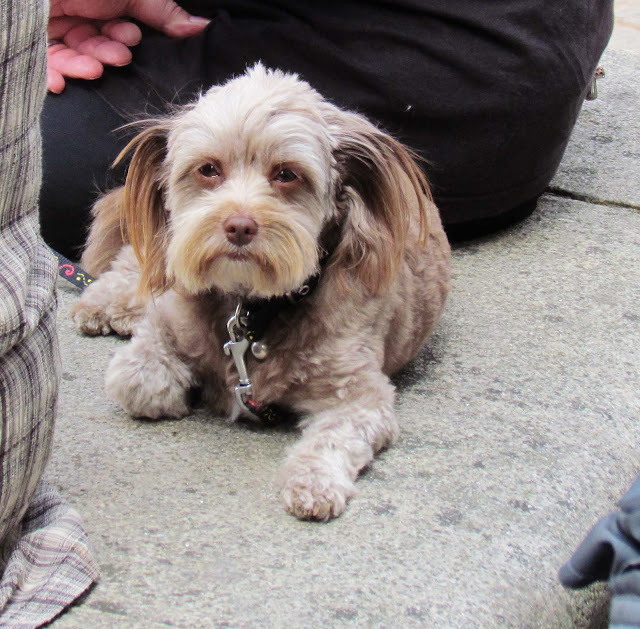 The dog with the human eyes. He was being ignored by his people, and gave me this appealing look.

The upended beatle. My friend was horrified that I had touched it, but I couldn't leave it there to struggle. Who knows-it may have been Gregor. Sad to see his outer wing was damaged.

Back to our friend. Saying goodbye. I was quite sad and so was Clare, my friend who loves dogs. If you look carefully you can just see him running after the cab. 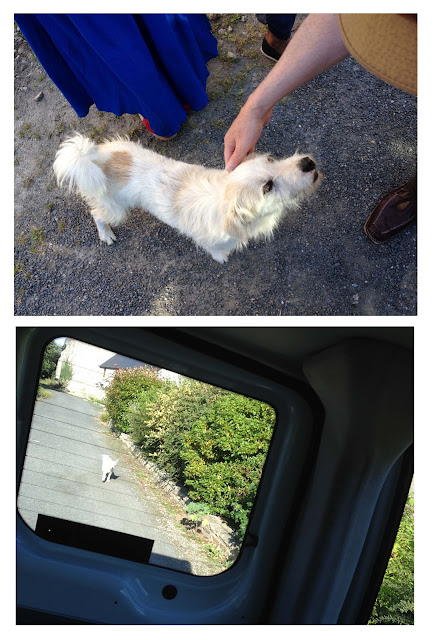 Such sweet dogs! Didn't you feel like taking one home with you? But to choose would be soooooooo difficult!

Oh, that little white dog--too cute... And the Dog with Human Eye...melting my heart! So many animal friends you met while on holiday. I love making animal friends while away, as I miss our cat-boy Charlie very much when we go away. My sister has two cats, so plenty of cat-love when we are Stateside though. :o) LOVELY catching up with & your holiday snaps, Sarah ((HUGS))

Oh, he ran after the cab? Heart-rending!

That's a lovely shot of Chardy (the close-up). I always adopt animals along the way too.

When I was in Cornwall with my aunt and uncle, we stayed at a hotel and I had a cat come in my window and sleep all night on the bed with me!

We are kindred spirits, Sarah.

Awww....so cute! I love it when we go somewhere and there is a friendly animal around.