I have been on holiday! I have been coached in the ways of common sense by Andy so did not loudly advertise the fact here before we went-though I really wanted to. We went to Brittany in Northern France, and it was lovely! While I was away, the promising nasturtiums became a tower block for cabbage white caterpillars. I saw a few fluttering around before we went and did wonder if they were laying eggs. I am glad it happened while we were away though, as now it would be pointless to do anything about them as the plant is destroyed! So instead I became wildlife photographer and film maker. I am certain you can hear the caterpillar chewing-on the ribs of the leaves. It is a very efficient eater, methodically moving its mouth from top to bottom. 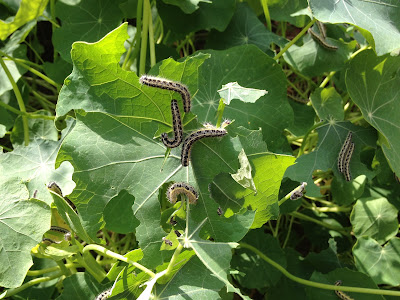 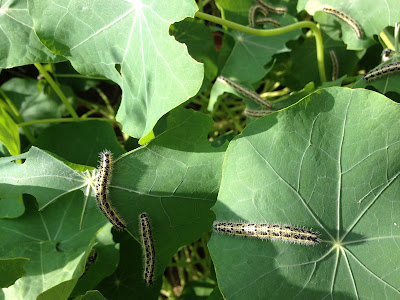 Can you guess I have many photos of France?! I will be back at the end of the week with some of them to share, as I am off again tomorrow, down to Devon with a friend.  We could not get the cats back from the cattery today as it is not allowed on a Sunday, and we were too late last night. I can't wait to get them back in the morning as I have missed them. I am going at 8.30, so as to have a couple of hours quality cat time before I go to get the train. Though the cats may have other ideas and wish to sulk!
I hope you have had a good week, I have missed all of you and will be visiting via my phone whilst away! x
Posted by Sarah at 14:01

mmmmm-munch. Why were you forbidden to blog about your whereabouts? Did Andy think that I would come over and burglar your house...he is correct, i might have.Love the photos on FB- too much fun - too beautiful!
Stella and I were talking about how cool it is for you to be able to travel just a few miles and be in a whole new world- we can travel for HOURS and be in the same spot...You certainly have the advantage living where you do. In all respects!

True it is so easy to go somewhere new. Andy was thinking of more local threats I think-though most people I know here live as far away as you!

VERY exciting about your trip to Brittany, Sarah... can't wait to see/hear more about it! But so sorry you've been invaded my creepy crawly caterpillars. Have you tried a natural insecticide soap or spray? Hope they stay away... eeewww... Happy Week (HUGS))

I'd be happy to have the caterpillars then the butterflies but I understand how mad you must be as well!
Looking forward to seeing pictures from your holiday, I love France and it's very photogenic!
Well done with all the crocheting, you'll be blanketed up like the rest of us soon!!!

I hope they don't feel sulky!

It's amazing how fast caterpillars can turn vegetation into compost. Too bad they can't be trained to take out the weeds and leave the flowers. I also enjoyed your Facebook vacation photos and am looking forward to more.

Linda Sue is right about so much empty between interesting, at least in the western U.S. Sometimes there are also way too many people jammed together in some places to suit me.

I think I'd prefer caterpillars and butterflies to blackfly, which is what usually seems to colonise my nasturtiums!

will these become butterflies?
a holiday in france! niiicee

Very nice, thanks for sharing.

I love Devon! My aunt used to live in Newton Abbot. Take some photos while you're there as well.

Sorry about your plants, but the little video was really well done!

I know that they can be destructive but I find caterpillars just beautiful!