A few views of some of the places I saw in Devon. 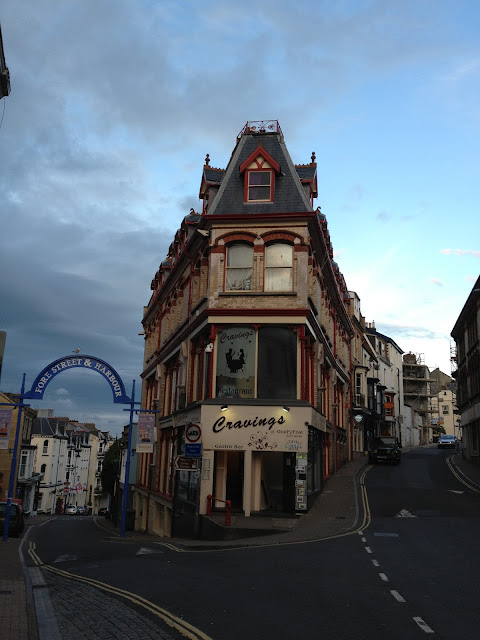 We stayed in Ilfracombe, in a guest house up from the town. The landlady and her husband were typically slightly eccentric, but very helpful with local area advice, and the breakfasts were delicious! The high street in the town is quite run down. I think the recession has hit hard here. I don't think the fishing industry is what it was, and the tourist industry probably isn't either. My friend felt that the town was upcoming again, but I didn't get that impression really. A bit of a sad place, but with some very pretty parts. I did my best to spend holiday money there anyway! I bought a painting from a local artist in Clovelly, and Cassie's new sheepskin rug in Ilfracombe, and we had lots of meals out and drinks. The name of this cafe seems slightly wrong-the word cravings has too many negative connotations in my mind. 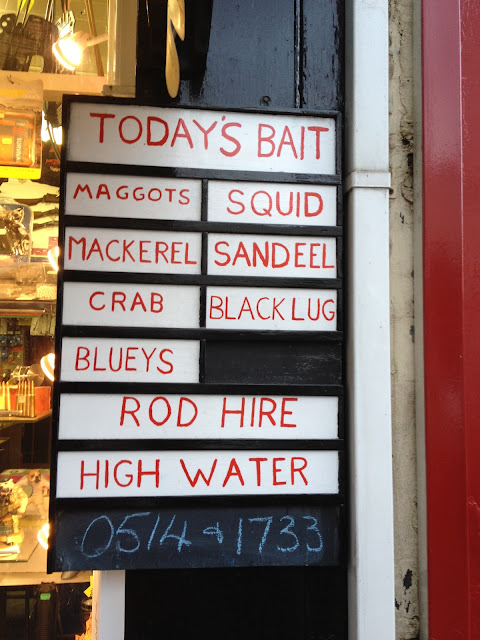 I love this sign for bait-and it did change a little each day, so it is not lying when it says today's bait. 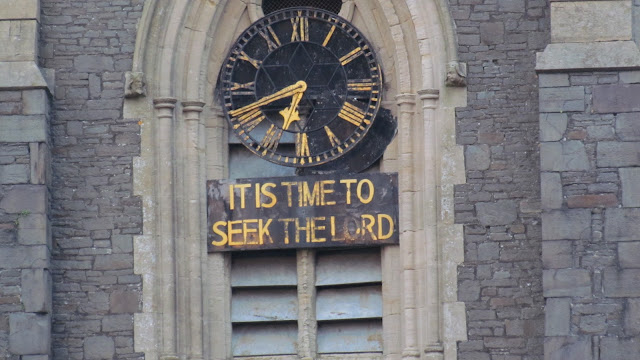 Victorian advice on the church in the town, a very gothic  looking and  imposing building-there is a picture of it at the end of the post. 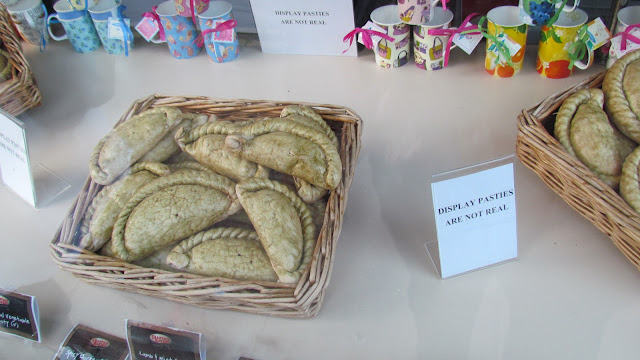 This made me laugh! My friend was once fooled by some pretend cakes in a cafe in Rye, so maybe this is necessary information after all! 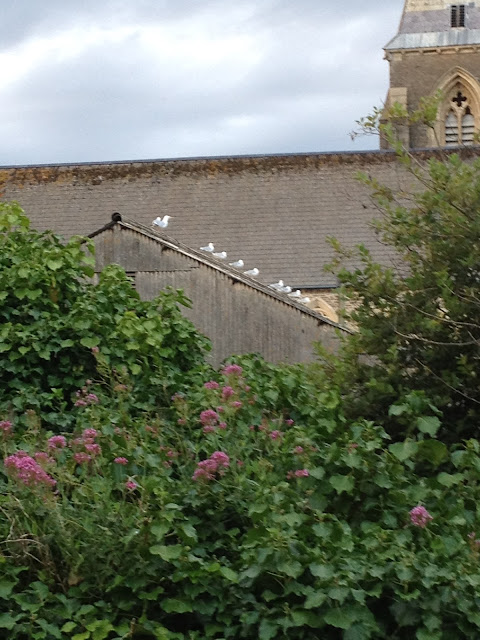 A row of seagulls. 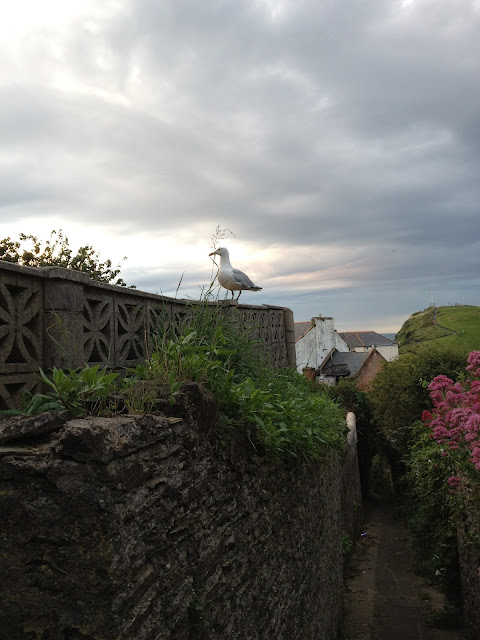 We went for a walk along the high street-beyond the shops, but planned to go to the harbour for dinner, and it would have been a long way round to retrace our steps. I made the daring decision to venture down this alley as there are always these sort of alleys in steep seaside towns, connecting the different parts. I think my friend was dubious but off we went, and were rewarded with a couple of interesting views, and it did end more or less where we wanted to be. 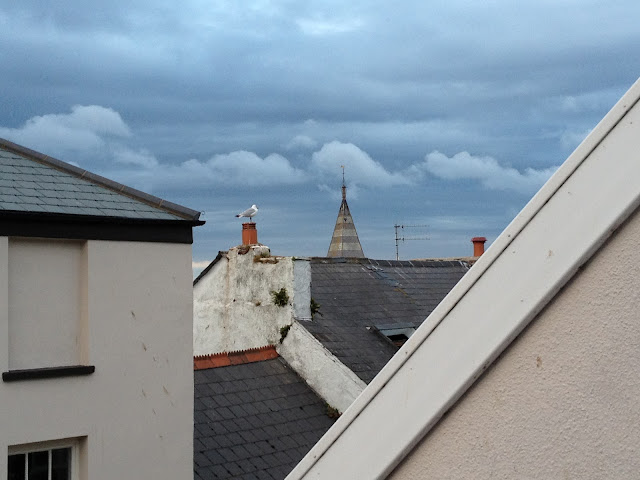 The roof of the Victorian church in the distance. 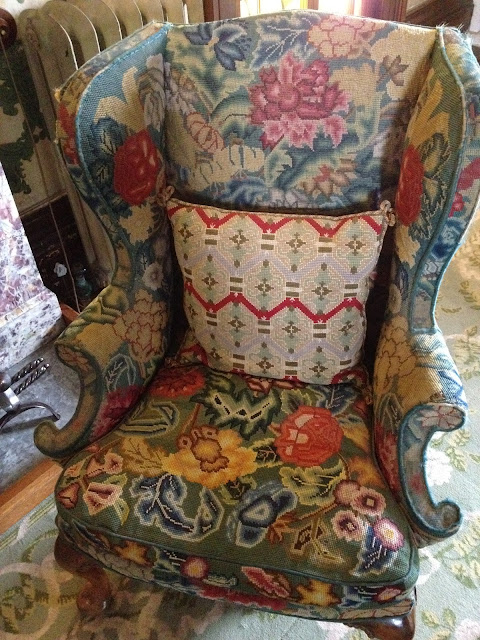 We visited two attractions-Clovelly, and Arlington Court, which is a Regency manor house owned by the Chichester family. Members of the family were big collectors, and especially interested in natural history, so I found it a very interesting place. It was also quite small for a manor house, and somewhere it was very easy to imagine living. It houses a carriage museum which was quite interesting too. The chair above is from there, as is the little moonstone mouse below. Though he may be glass, I am not sure. 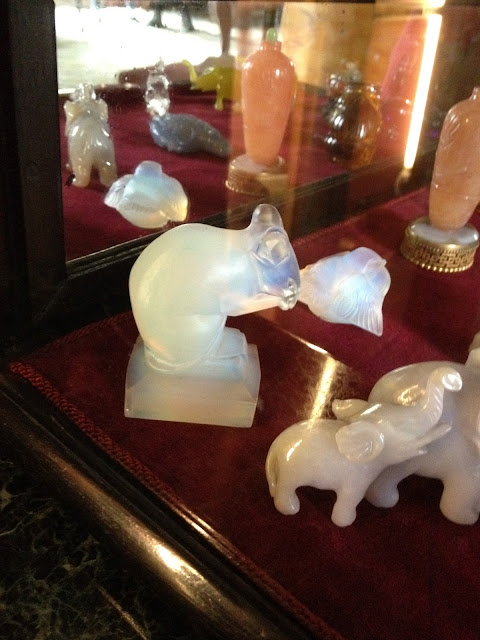 There was a touch feely dress up room, aimed at children but which I quite liked too. This poor old fox stole was very soft. Much softer than my stuffed one. 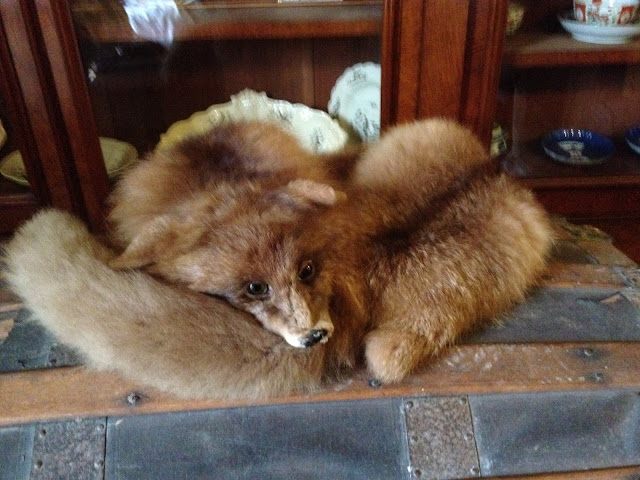 Below are a few pictures of Clovelly. It is a fishing village built on a very steep hill, with cobbled streets made from stones from the beach. It is very steep! It is also private-so you pay to go in at the top. People live there and their homes are basically one big tourist attraction. It must be a weird place to live. I wonder if they get really excited when the tourist season ends-I think I would. 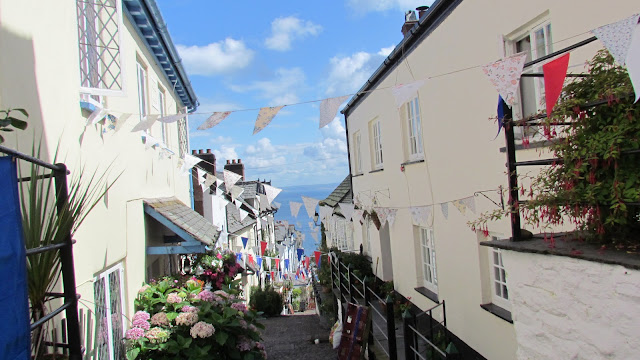 It is a very pretty place, and the sun made it especially so. It was hard to get photos with no people in-in fact most of them have. I love this picture and the next one-the colours and the bunting. 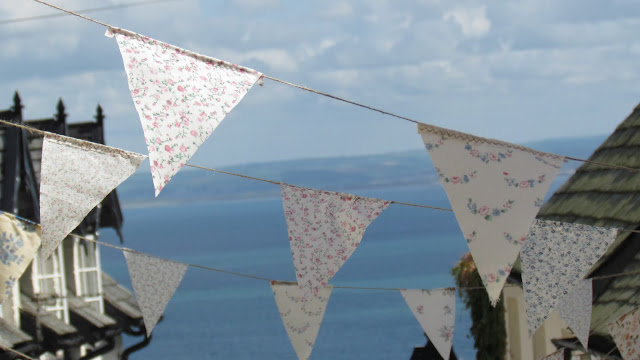 There were quite a few cats in Clovelly. This one really reminded me of Lily. She rolled over for me to tickle her tummy, then got me! Just like Lily does sometimes! She is also the little ginger belly that Lily has. She is her Devon double! 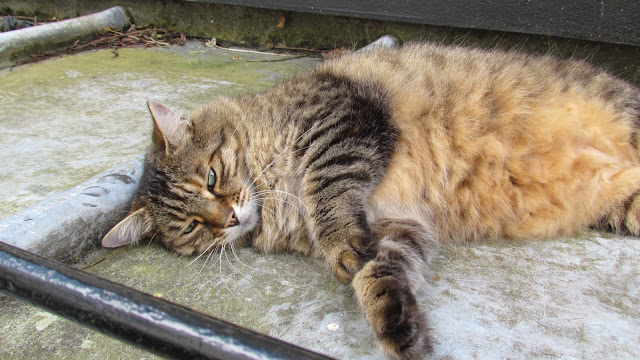 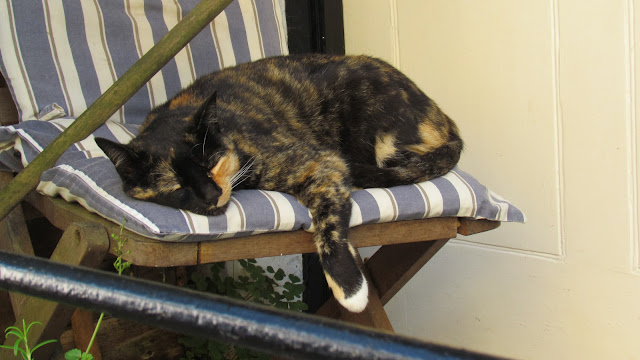 Back to Ilfracombe. This sign is for the Tunnels beaches. There are tunnels dug through the slate cliffs which allow access to the private beaches. 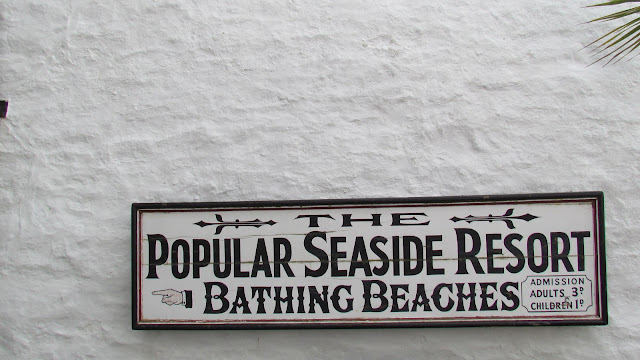 I love the sign below with the ferns growing out from between the tiles. It actually says discounts not disco, and was one of those hardware shops with everything, like a cavern. It sold wool and crochet hooks. I bought two balls of wool and two hooks as they were so cheap! 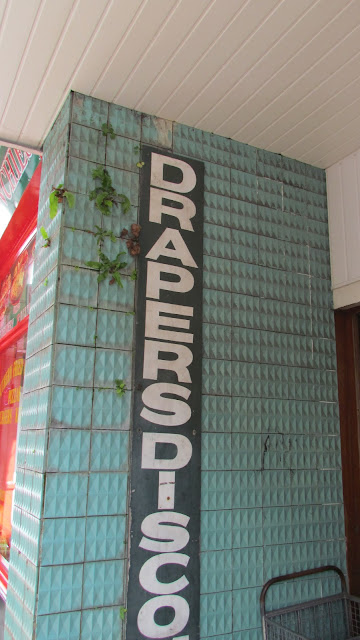 Back to the church to finish. It is quite scarily imposing isn't it? 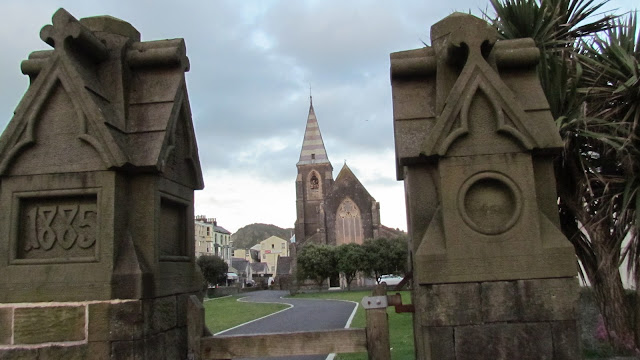 I really enjoyed your photo tour of the place. Sad to learn such a picturesque town is struggling in this rotten economy. Loved all the architecture, the kitties and I especially liked your photo of the street between the white buildings with the strings of flags and the blue sky. Looks like art.

Sarah, you get to wander through all these interesting towns and villages. The architecture is so different from what we see in Nanaimo. I really enjoy reading your posts. Happy week to you.

What a great series of shots, it looks like such a lovely area to visit, full of history, and those gorgeous buildings

What a lovely visit to Devon. I do hope you had some cream teas?
Especially liked the bait sign and those super pussy cats.

I had a very small one though it wasn't proper clotted arteries cream unfortunately!

i went to Ilfracombe as a teenager with my family. We had a very old car and it seemed to take forever. It was lovely then, shame it's not so well-off now, but then it's happening here as well. Lots of shops have closed down and the town is starting to look a bit shabby. Recession...

Oh, how WONDERFUL! And Clovelly too... I've long wanted to see the West Country of England--it's on my life list! So happy to see where you've been and your unique way of sharing a place, Sarah. So glad you've been making some great trips & seeing places this summer.
Lovely to catch up with you after a brief two-week blog/online hiatus! Happy Weekend ((HUGS))

i love going on trips with you and seeing all these places..i read a LOT of historical novels and some of these places you go are in the stories so it is nice to see if they coincide with my imagination
:D

Looks like you had a lovely, relaxing time! Ros

What a beautiful place! I can only imagine what an awesome time you had!