It makes sense to me, considering how many times I have watched it, that I should finally have my own 'Spinal Tap' moment. It involves this rather attractive and rather large, rather larger than I in fact expected, Tiger. He is from freecycle, from a lovely and quite mad (the good kind of mad) lady called Hannah, who had a beautiful Alsation called Cleo. Her message in the freecycle list said '2"old cat/tiger soft toy. Here is the message in full-having met Hannah I can hear her saying it.
''hi
I have a cat/tiger soft toy, still got all the stuffing she is old and needs a bit of a wash/scrub up but shes cute. Has a chain round neck so not really suitable for a small child. She is a little hard not a squidgy soft toy.

hope it finds a nice new home. It would be a crime to put in landfill.

will give to first to ask for and collect.

p.s if you say you are coming please turn up, if you change your mind PLEASE let me know so I don't wait in and waste time or save this for you when someone else wants it ''

The crucial mistake Hannah made in her message was to put " not ', which led me to believe that, even if I was not keen, what is the problem when it is only two inches high? Two feet high is a different matter altogether! 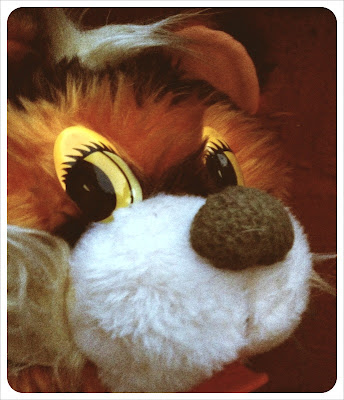 Hannah identified her house, as the only one in the street with an eight foot high hedge, (she got that right!) and a wrecked camper van in the drive. I got there, with the aid of the trusty sat nav, and rung the bell. While I waited I was entertained by the beautiful sound of wind chimes, and by curiously looking at the work she had been doing in the garden, then at the snail that was living inside the camper van window. A large sounding dog barked at me while I waited. Hannah opened the door and I was greeted by the cat/tiger toy. I said that the children will love him and she was really pleased. It is twenty five years old and was her daughter's. We then proceeded to have a most interesting conversation covering many topics, while I held the toy in one hand and stroked the lovely dog with the other. Hannah said that she (Cleo) was a good judge of character and that if Hannah was scared of me then Cleo would bark and be fierce. But she wasn't, just gentle, gracious and beautiful. 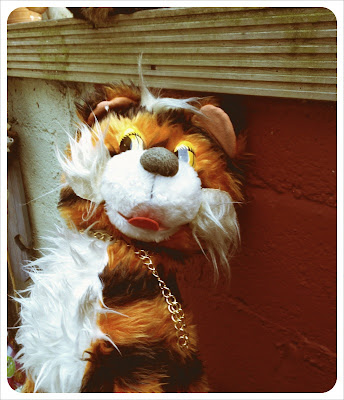 Our conversation included many things, amongst them, how yahoo, (who run freecycle) are selling whale and dolphin meat, and Hannah is trying to put a stop to this, how she is having a total spring clean and is surprised at what she has been able to freecycle, how all the windows on her estate were replaced with double glazing, and how, since then, the burglaries on the estate have gone up massively, (she suspects the contractors are casing people's houses, and she has not been burgled because of Cleo), how, when men (workmen I think) come round, she puts Cleo in the garden before letting them in, to give the impression that she is much more scary than she is, how she wishes she was not going to be here during the Olympics, due to the traffic disruption, and how cycling is the only way to get around then (she had been on the way to the shops on her bike earlier when I rang, and had told me in great detail what she was going to buy) and how good Cleo is-she runs alongside the bike, and is very good at roads usually-unless distracted.
This is a very long and rambling post, but I really want to remember our conversation as it was fun! I really liked Hannah, and if I see her riding her bike around with Cleo will stop and have a chat.
Anyway, back to the cat/tiger. He is not the cleanest of cat/tigers I have ever seen, so is currently sitting in the garden, before being washed tomorrow. He will not end up in landfill, never fear, though he may undergo a few operations before he is usable.
Posted by Sarah at 13:06

And I meant to add, he is quite cute!

Hurray! Richard Parker is very pleased and delighted to hear of the great rescue.

What a brilliant story! And what a beautifully kitsch tiger xx

Hannah sounds wonderful and also wise - cycling certainly is the best way to get about and I bet that the double glazing did increase crime! Not surprised you intend to sttay in touch with this interesting sounding woman .

What a wonderful adventure!!!
Have a great weekend.
Always, Queenie

Good thing the silly spinal tap error was between two inches high and two feet high and not toy tiger and real tiger. But the tiger brought you together with another interesting person with a lot of good stories--a very good ending to your post.

What a cutie! I hope he doesn't mind his bath...

Good story, it's great meeting characters who brighten a day! Was it really a 2 inch tiger you were wanting?

It made me think of a little tiger I used to have when I was a child and I thought it might be like that!

I wanted to see a picture of Cleo!
This sounds a wonderful adventure and I'm so happy the tiger will have a new home.
Have a super weekend.

How funny! He is a very lovely cat/tiger though.