Almost a Luddite, but not quite

I am certainly not an 'early adopter', an annoyingly jargonish term. But I do get there in the end. I was pretty late to get a mobile phone, not feeling that I needed one. What was I thinking?! Though I am not a person who has their phone glued to their side, and often don't look at it for a few days, so am annoying to people who are trying to contact me in that way. Recently, I got an iphone. I have thought about it, saved for it and pondered on it for a couple of years, and then the mortgage payback thing came which decided me. My friend Clare explained to me how I could go on the O2 website, and get a phone the next day, so, in half term, on the day I was in bed due to too much wine the night before, I took the plunge and ordered one. I have not used the phone aspect of it much, but really like the internet side of it. It works quickly and well, and means I can check my emails and blog when out, a novelty that will soon wear off I am sure, because waiting until I get home is really not that much of a problem. I like the camera and the hipstamatic app, which these pictures are taken with. It has a non-controllable little circle to look through and the view alters and wavers between shots, so you don't know quite what will appear. I have also joined instamatic, but have not a clue how to navigate it, and don't really want to. I quite like their photo effects too though. I can read my kindle books on there which is great. It is a magical little machine.
The only thing that is not so good, is that it does not seem to want to use my wi-fi at home, so I have used up more of my monthly download allowance than I should. I have tried various things-re-setting the network settings, turning off the 3G, and forgetting my network then re-joining. The wi-fi symbol was displayed for a day, then not again, apart from the occasional flash, yet it says the wi-fi is on. I need to ask my sister who is a computer genius, but if anyone reading this has any ideas I would be grateful! 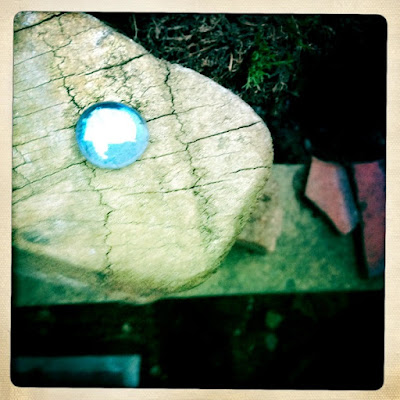 I found this little iridescent glass pebble on the way out of school tonight. I found it in my pocket as I looked around the garden tonight, and put it on this piece of wood. Pretty. 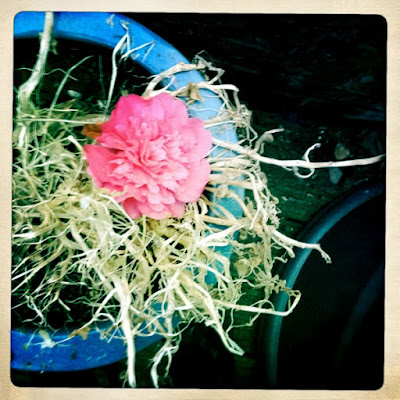 I found the camelia flower on the ground, then put it in this straw like dead plant-the pink, grey-blue and straw colours look good together I think. 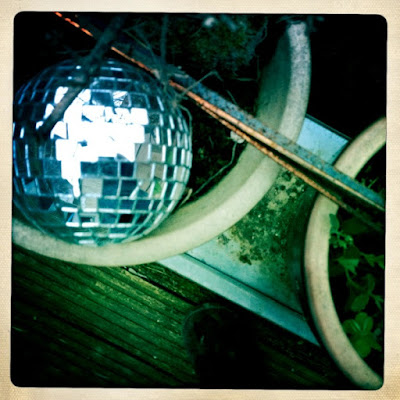 No garden is complete without a disco mirror ball. 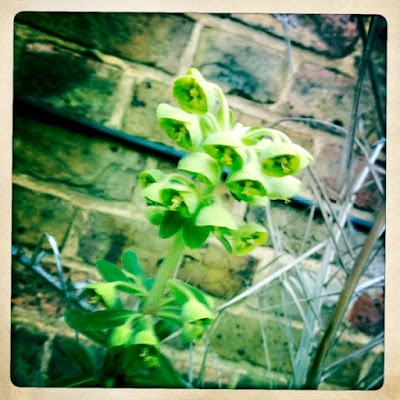 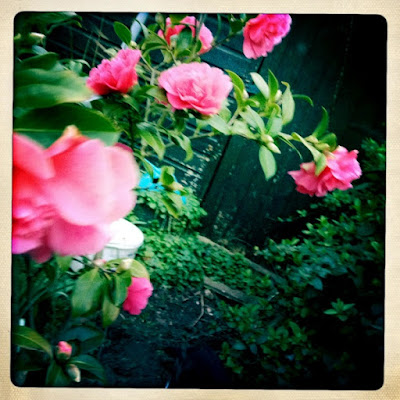 Camelias again.
Posted by Sarah at 13:58

Dear Sarah,
Your garden photos are a treat.
I'm madly in love with my iphone too and have used up all my minutes doing Instagram back and forth with my daughter....! If you join INSTAGRAM, I am biffwix and Claudia is claudschmid.
I wish I could help you with the wifi, but am too stupid too and it may be different in England.
You should get OldPhotoPRO (free) it make cool olden days effects
also Camerabag (not expensive) andFrametastic ( I read an article about the best not too pricey apps.

Hope you have a great weekend.
ps Frances of CityViews/ Country Dreams is coming to London very soon. She is a real world friend of mine.

Thanks Elizabeth-I shall look at all of those!

When Malcolm was going to get me an ipod, Stuart told him to get the touch, so that I could also use it to access the internet. I now use it more for that than for listening to music, as I can check my emails instantly, rather then waiting for the laptop to boot up

Great so glad you finally got an iPhone!!! Great isn't it.