"We would be warm, below the storm
In our little hideaway beneath the waves."
What a lovely thought, to be in an octopus's garden, in the shade. My octopus is out of the sea and enjoying the tulips. 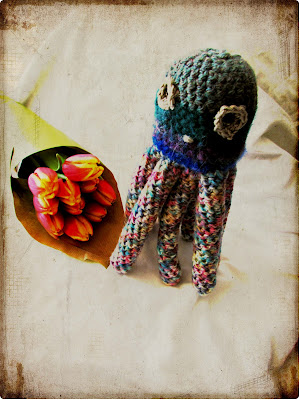 When I sewed him together, my main concern was fitting all of his eight chubby legs around his little body. The exciting side-effect of his fat legs is that he stands up. He looks more like one of those enormous alien like squid with giant eyes. A creature I would love to see-though at a safe distance-maybe from my yellow submarine! 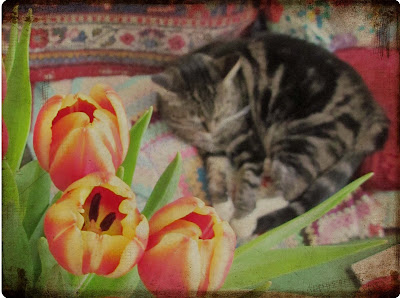 Cassie requests that you tip toe, as she is fast asleep. 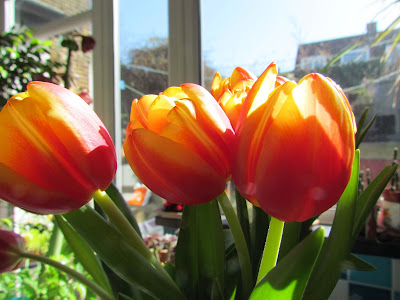 Aren't they lovely? PPA this afternoon, and had to go to the shops on the way home, and couldn't resist them! 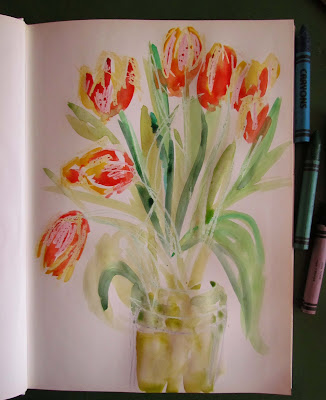 We had an inset day on Friday-which nursery somehow were not included in at all-which gave us a day to really get going with the packing. We have done almost all of one of our big cupboards. There were a few finds of things that have been in there a long time. Some were thrown away, some kept, and some rehomed by me-a metal dentist's tool (too dangerous for play, but perfect to add to my clay tools), a horseshoe, two giant pinecones (from a large box of them) and two lovely blank paper sample books-donated by our lunchtime supervisor ten years ago apparently. I am afraid the children have been deprived, and I have brought them home to use as sketchbooks. They have glossy paper which I thought would be good for drawing with pen. It turns out it is also good for watercolours. 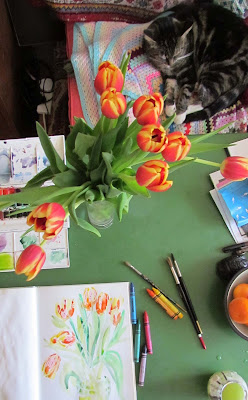 Sometimes, I feel like I am playing 'artist'-like I feel as if I am playing 'house' when I put a vase of flowers on the table. A double whammy today then! 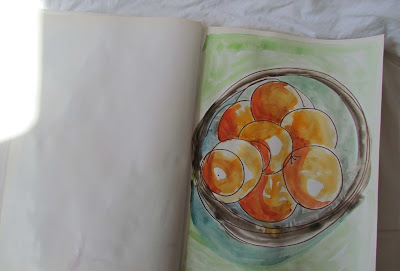 My bowl of satsumas. 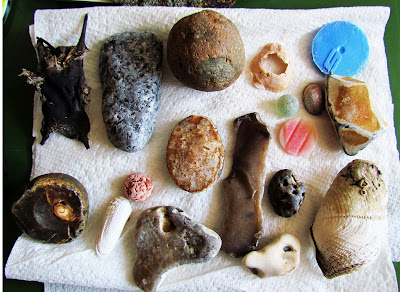 My beach finds from Saturday-flint comes in such a variety of shapes and subtle variations of colour. I love your paintings - especially the tulips. Interesting finds - all I find on the riverbanks here is litter!

Your blog is always a delight to come to
like having a cuppa with a chum.
Love your tulip pictures and the beach finds.
I think I once went to Reculver in another life

I know WHAT you mean about "playing", but trust me, you are the real deal!

I couldn't resist those tulips either, Sarah; they are gorgeous!

That is the cutest octopus! I would like him on my desk!

I have been thinking of making an octopus in clay! Love your photos! Love the tulip painting!

Your octopus has wonderful personality, such a cutie!!
I love your painting! So full of color, freedom and life!
Have a great day,
Always, Queenie

haha.. your octopus has such presence, Sarah...what a cutie! And so is your Cassie. I love the tulips--such a wonderful fiery color. I love peeps in your sketchbook... and you always find the best things, so fun to see your collections. :o) Happy Week, my friend ((HUGS))

Cats know what is important. Relax, enjoy the warmth and the flowers and the sunshine. Your beach finds are super as is your art. Best wishes with the big move.

Hi Sarah, I love your octopus but I'm a wee bit nervous of the real things. I'm afraid I won't be joining you in the Octopus' garden in the sea.