Keys To Many Doors

In the key cupboard at school there are many keys, with boring little labels such as ICT cupboard and PE cupboard. Most of them are so boring they just have numbers and correspond to a list on the wall. The one I want at any given time is not in there.
In the last week or so the children in the nursery have been making keys from a toy called cleversticks . They use their keys for bikes(cars) and the play house. When I asked a child what his keys were for, imagining castles and bear's houses, he looked at me rather pityingly and said "the door" I asked what door? Again, the flash of pity(she doesn't know!) then, "at home"
Anyway, all the key making gave me the idea of getting some old keys from somewhere, and, naturally, Ebay obliged with a box of one hundred keys for a very reasonable price. Most of them have ended up at school, to be used for doors to the home and other, yet to be decided purposes, but a few were far too lovely to give away.
What can I do with them? I thought about it for a while, looking around our little flat. Then I remembered my conversation with the very pragmatic four year old and thought, no, I want my keys to be to places I wish I could go at any time, like Alice, through little mystery doors.
So, I made a fantasy key holder, to combat the boring real ones around me. I have been to four of the places in reality and would like to go to the others.
The little rusty key made me think of Neptune and the link to his palace is what came up when I googled it. I thought it was a reasonable alternative to the real thing! 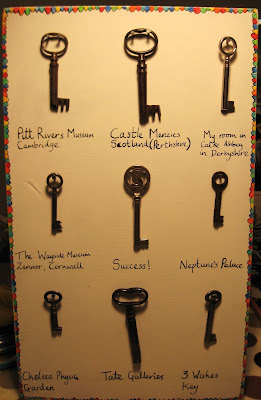 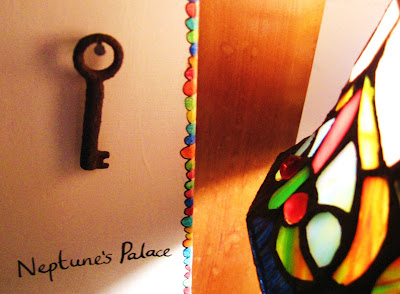 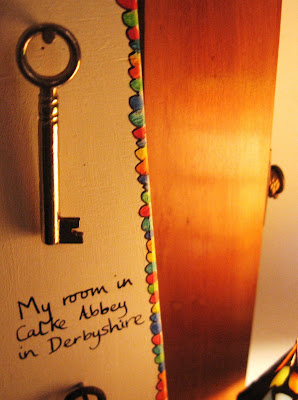 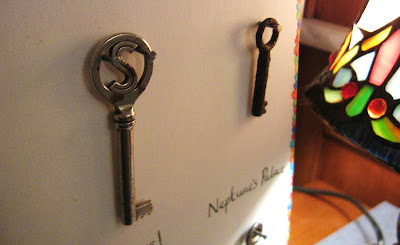 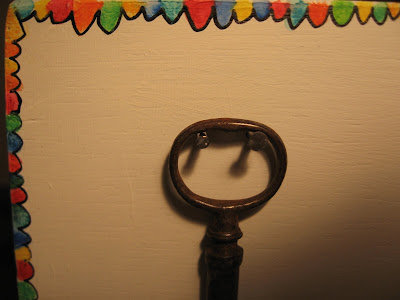 Pitt Rivers Museum, Cambridge
Castle Menzies, Perthshire, Scotland
My room in Calke Abbey, Derbyshire
The Wayside Museum, Zennor, Cornwall
Success
Neptune's Palace
The Chelsea Physic Garden, London
Tate Galleries
3 Wishes-entitles the keyholder to three visits to places not yet dreamed of
Where would your magic key take you?
Posted by Sarah at 14:46

Sarah, what a lovely idea. I have boxes of keys - some of them very strange. I want a key-rack like this now.

Sarah, that was fun! What a great idea!

Oh you across the pond must have some really fascinating keys. Key art I should say! I am envious!

Hi, Sarah! What a great idea to have keys to magical places on display! I love it! I think some of my keys would be to: (1) a cabin in the woods with hiking trails nearby, (2) the Outer Banks of North Carolina, (3) a beach on Molokai, Hawaii, and (4) Vancouver, British Columbia. Wouldn't it be great if simply picking the key up transported you straight there like a sci-fi transporter???

That is such a wonderful idea. A dream board or wish board. When children look at keys they imagine all the wonderful places they will go. You have sparked some great ideas!

Sarah, I love your key holder; keys hold such mystery (especially old ones). A very creative use!

I love what you did with the keys!! So imaginative. I have keys to take me to Electric Ladyland, Dagobah, Paris, Tahiti and Lenny Kravitz' place.

LOVE, love, love this! I am sorry to be such a horribly blatant copycat but please accept it as a compliment to your creativity, because I have to do this too.

P.S. you sound like the sort of teacher that every child should have!

What a fantastic idea. You are so creative. I wish I had as much creativity as you! I don't know where my keys would lead.... maybe Disney World, Bahamas, & a cruise ship.

What a fabulous idea Sarah! I love it.

We inherited some large old keys with our Swedish house and lead to some interesting places such as the boat house and the loft.

If I had one of your keys though I would wish it to take me to an Alladin's cave. Instead of being full of jewels, it would be full of gorgeous colourful fabrics and all that was needed to sew. It would all be at my disposal, and no matter how long I stayed there, only a few minutes would have passed in the real world.

How lovely! Have you seen the key room at the Victoria and Albert Museum? It's got lots of huge scary black keys that look as though they open dungeons and vaults of pirate's loot!
I would like two keys- one to the imaginary museum-within-a-museum at the V&A where all the secret things that sensible people don't believe in are kept, and the other to all the lovely dreams I have where the sea is just over the back wall in the garden, and where the tortoise I dreamt about really can come out of the dream and live at home with me. That sort of thing.
This posting has made a nice start to the day Sarah! Thank you!
x :)

Thanks everyone!
I would love to see your key rack Roddy and yours Kendalee.
Thanks Janine and for the doll group invite too!
Thanks Anne-I wish that would happen when I picked upi a key. Your places sound beautiful. Hi Anji! I might well take the magical key board to school, or make a children's story one.
Hi Lori-nice to meet you!
Hi Shell.YOur places sound great-though I have to look up Dagobah?
Thanks Kendalee-I do take it as a lovely compliment and would love to see where your keys will take you.
Thanks Liz! I would love to go to those places too. Perhaps we could meet there?!
Thanks Lynne-that cave sounds very enticing!
Hi Helen!
I have those dreams too but mine are always an extra(usually huge and lovely)room I never knew I had. I have at least one of those dreams in every place we live and I even had one about my classroom the other day! Glad you enjoyed reading.
I loved reading all your comments!
Sarah x

What a fantastic idea!! I love this so much. I wish I had some old keys, but sigh..

Sarah, thanks for stopping by. As you can see by my previous blog I have a soft spot for 3-4 year olds. They have an uncluttered outlook on life. Also,the magical keys are a great idea. As for key places...I will go with Anne's list and add a beach called Akumal near Cancun and the Louvre.

oh i'd be VERY tempted to wear the 's' one on a chain around my neck -
ESPECIALLY if my name were Sarah!

i'll say something soppy like -
i'd love to give someone the key to my heart.
sad but true.

Keys figure so prominently in my writing... mmm, what a good idea to put them on this keyrack.

My magic key would take me through time and not just place. I think my keys would take me to fictional places, too. Wouldn't THAT be grand??
Altho I would be happy to go anywhere sometimes. LOL. Just to get away, right?
Candace