Yesterday evening as I was driving home there was a beautiful blazing red sunset. I went down to the river to take photos but it had gone down, leaving a glowing evening behind it. 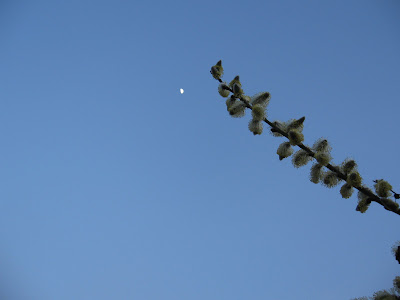 The catkins stood in front of the moon. 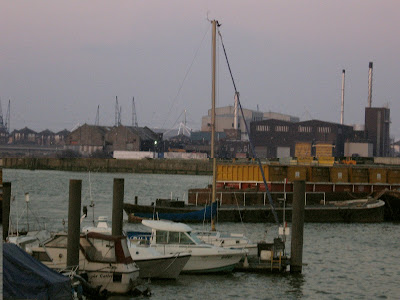 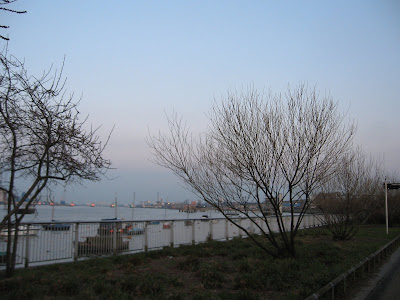 The trees stood out against the sky. The lights of the barrier twinkled in the background. 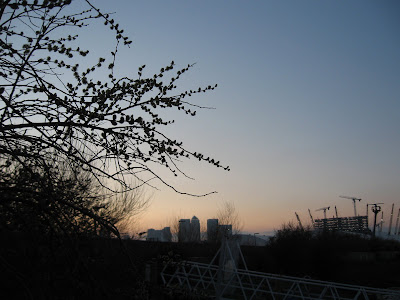 The Isle of Dogs rising up in the distance. 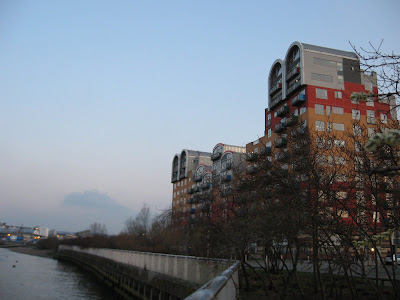 It was lovely by the river but I did get some very strange looks from a man in a UPS van. I gave him strange looks back but I don't think he noticed. Michael Jackson was on at the O2 so I was lucky to park.

Some morning sunshine in the kitchen. 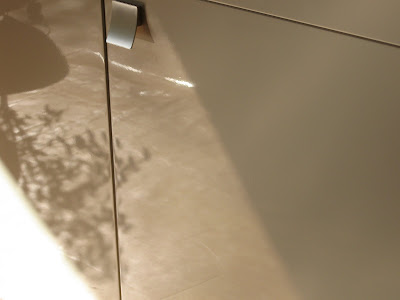 Hi, Sarah! Love the picture of the catkins in front of the moon. They lead you right to it! Nice framing.

And thanks for your sweet comments on my blog about my video! :-)

When your page loaded up the catkins really caught my eye.
When something takes my eye, like a beautiful sunset, I just want to be able to bottle it up and keep it for some future time. I suppose the camera is the closest way of doing this. Love the way the branch points to the moon.

Thanks Anne and Lynne. I know what you mean Lynne about wanting to bottle beautiful things up. I did love the catkins and they looked so sweet against the moon.

Beautiful pictures! I love that time of day just after the sun has set. I think some writer or poet called it L'heure vert - well, something like that anyway. The sky takes on this glassy green hue ... Do you have to drive far to get to the river? I have just seen little bits of the Thames when I was in London, I always thought it must be so great to live near its banks. Of course, then I took out this (rather awful) DVD about some massive storm hitting the UK and the barriers could not hold the water out and people drowning all over London and getting trapped in subway stations and after that I was cured. Curious the power of bad movies on the impressionable and imaginative mind ...

Thanks Anairam! Was it Jules Verne? That may be nonsense but there is a great French film based on it whoever wrote it (The green ray? My memory is so bad) It is a romantic film and really good-I have it on a free dvd somewhere and if I ever find it I will tell you!) Right at the end of the film the sun goes down over the sea and this green light spreads.
The other film you mentioned-I have seen that- it is truly awful! In fact, despite it being about a tragic event, it made me laugh quite a bit! The river is about a ten minute drive from here-just down below us. As long as I live in London I want to stay in the South East as I love the river.
Thanks Liz too!