A couple of weekends ago, Andy and I met my Dad and his wife Joan in Loose village near Maidstone where he grew up. His Mum's family were from Sheppey like my Mum's but Dad grew up here in this amazing little village. You turn off of a fairly main road into Maidstone, and after about a five minute drive, you end up in this idyllic valley. A little river runs through it below the church. Dad used to skid on the ice on the path you can see in this picture. From all the tales he has told me recently I think he was quite mischievous and adventurous as a boy. He told me a story about how he and his friends used to collect the bangers from bird scarers in the local fields, and put them all together to make a kind of bomb, which they put into the wall of a little bridge near where he lived. On their second go of this fun pastime, the local policeman caught them in the act and told them all to go home, tell their fathers, and for their fathers to repair the farmer's wall! He also used to play knock down ginger by tying a string to door knockers so people couldn't see who it was. 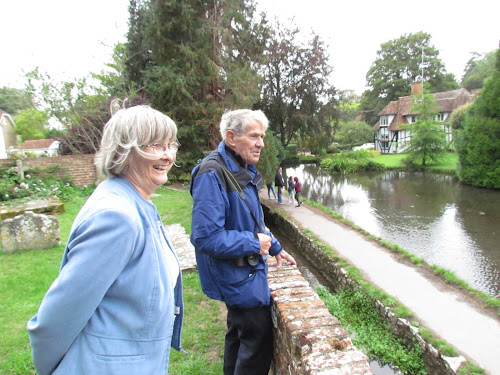 The smirk of someone remembering school boy pranks! 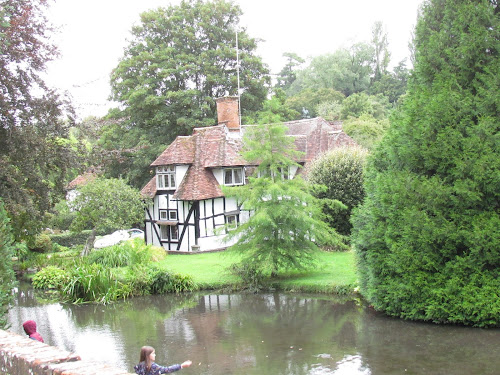 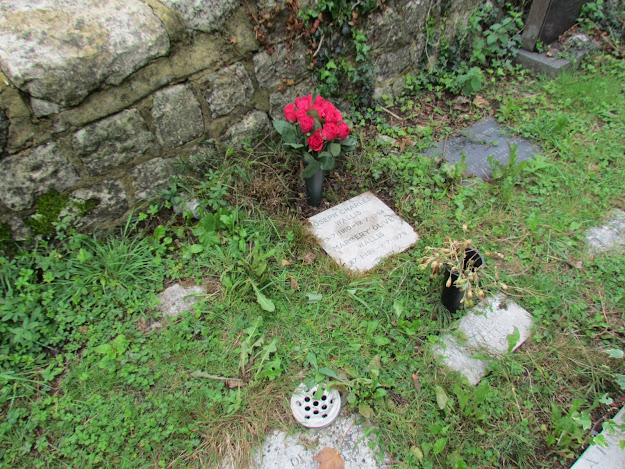 This is the stone with my Grandparents' inscription on. For all this time I thought my Gran's name was Margery Selina. I found out that it was Margery Olive. Equally lovely name but where did I get the other idea from?! 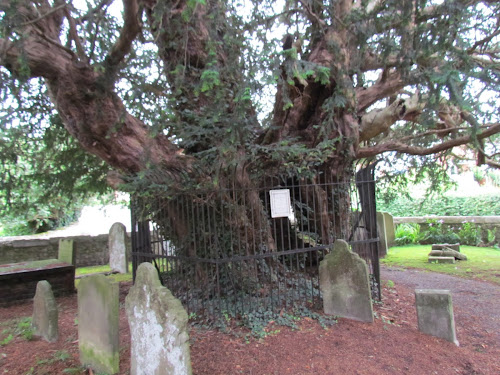 This tree is approximately 1500 years old. It is a yew, a traditional churchyard tree. There are many possible reasons for so many of them being found in church yards, such as that the churches were built on sites of much older Druidic worship, that the trees are poisonous so animals could not easily reach them in these places, and that the heart wood, being red and white, represents the body and blood of Christ. Whatever the reason, I suppose the church yards are a fairly safe place to grow really, really old. 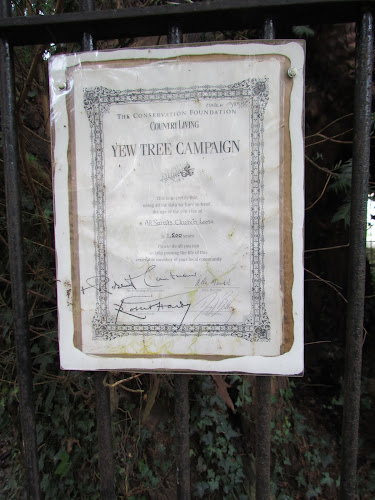 My Dad showed me this notice box which he made when his Dad died and which is in his memory. I like how a practical thing that can still be used all these years later was made. Dad is a practical person who can make many things, and so was his Father so it seems appropriate. The brass plaque was very tarnished, so I decided to go back soon to clean it. 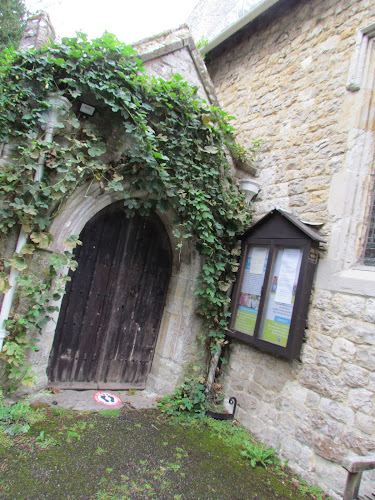 This is a recreation of a sign that used to be at this junction. 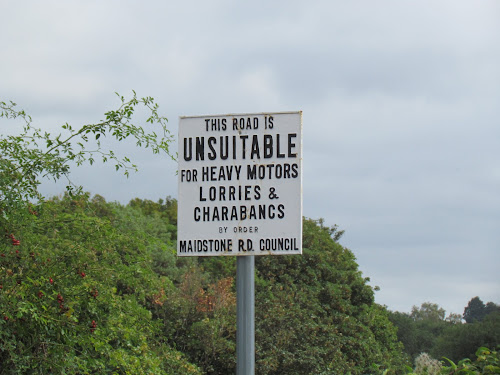 Over the road from Dad's old house lives this magnificent Highland Cow. With some cow friends. 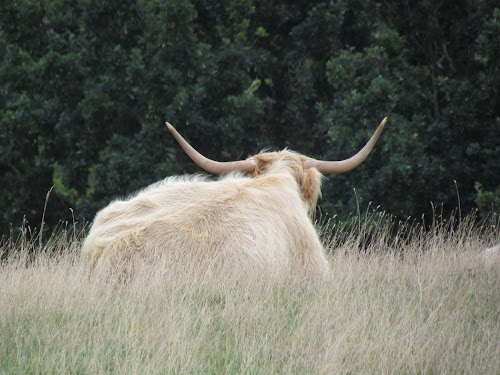 The house on the left was my Dad's. 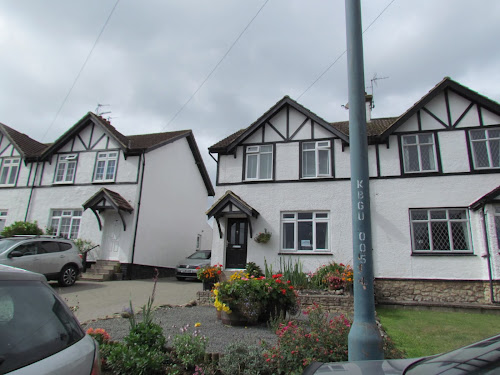 These photos are what started the idea of visiting his childhood home. This is my Grandad and his army pals who were all from Yorkshire. (I think, I will check that!) He is the one on the top right. 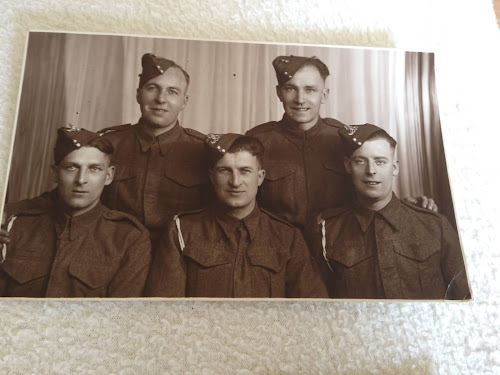 Below is my Dad, and his little brother Norman. I think the dog was called Judy. 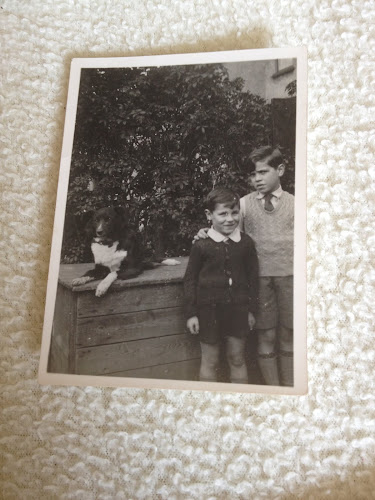 This is my Aunt, Brenda when she was about ten, standing on the grass in front of the house, and my Granmum and Grandad in the drive way. Another tale my Dad told me, was of a V2 rocket. He and my Gran watched a fighter plane nudge the rocket, as, if you did that, their navigation device wouldn't carry on working so they could be made to land in a relatively safe area. He knew what would happen, so he rushed around the house shutting all the windows to protect the house. Sadly, the opposite of this would have been the right choice, and when the rocket landed at some distance in an orchard behind the house, many of the windows smashed! He was only eight, and said he was trying to be the man of the house while his Dad was away! 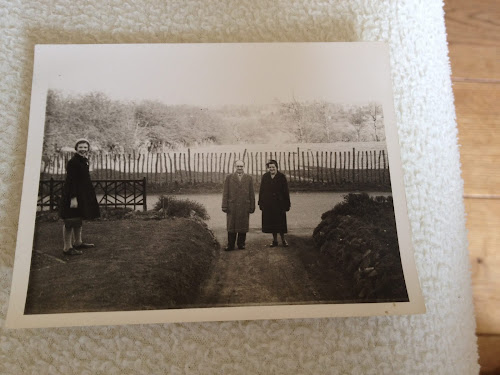 I did go back to polish the plaque. It was much harder than I foresaw, but I gave it a good twenty minutes and this was the result. 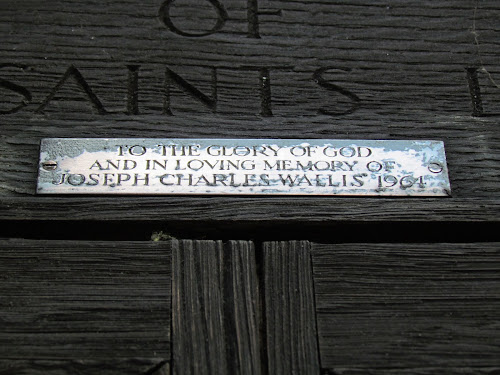 Then I walked around the corner of the church where I hadn't before, and came across this strange head. It is called the Charlton Memorial from what I can find out on the internet, with not a lot of other information. It is to a local family. I am not sure when it dates from but it looks pretty old. It is a little spooky I have to say! 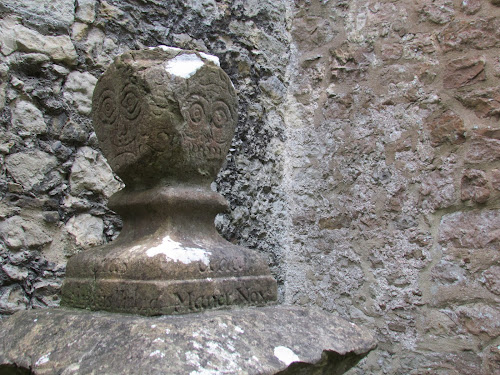 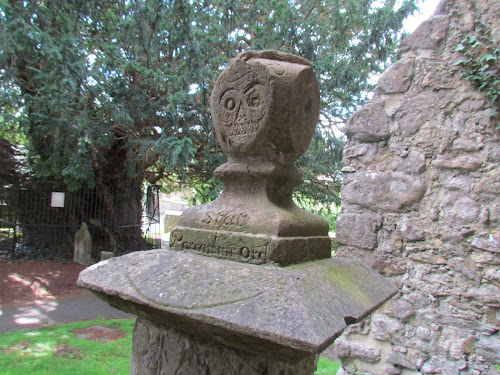 I love the photo of your auntie Brenda standing on the grass, it is surreal and would make a very nice painting. I am not sure how those lads kept their hats on all cocked to one side, defying gravity and wind. Your are right, that is an ideal little village and the bovine is a lovely thing! You father has been a lucky man. I see where Antony gets his penchant for carving- how odd to find a skull , Antony's favorite thing, near to where your grandmother has her name in stone.
What a beautiful day you have had!

What a lovely thing to do, polishing the brass of your grandfather's memorial notice box---and what a wonderful memorial--something attractive and really useful.

I love seeing old photos--the backgrounds of people's lives. Thanks for sharing these.

I also like signs. "This Road Is Unsuitable"---such a polite suggestion. ("you may not want to go down this way...")