Another Day, Another Walk

Since going back to work I get so much more exercise, all walking but better than before. Today I was not at work though, as I had a hospital appointment for some tests. I am pleased to say that they turned out ok, and other than worrying about the appointment I had a nice day. 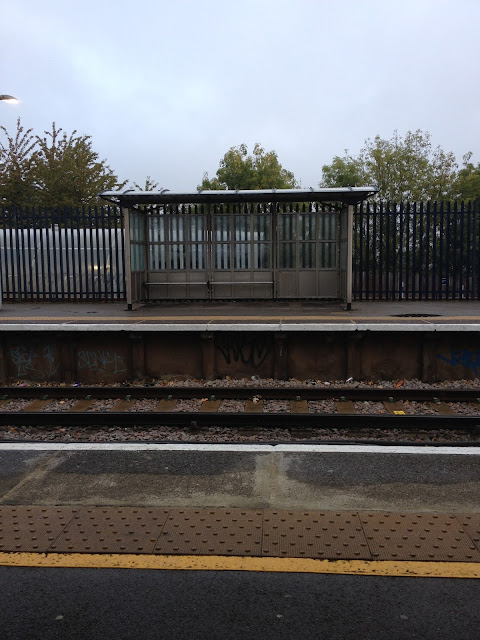 View from the platform. I like all the horizontal lines, the different textures and how grim it looks. 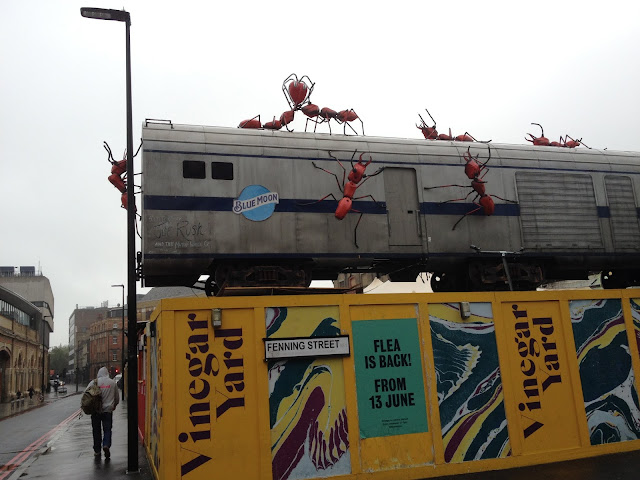 Pre-appointment walk (I was an hour early) up St Thomas Street where I was pleased to discover large ants taking over a train carriage in the air. I have not heard of Vinegar Yard, but it looks great. Not even sure if it is open at the moment, but one to remember for the future. 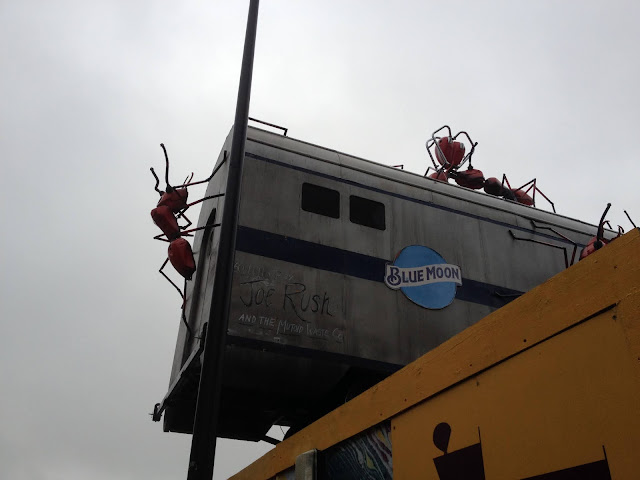 This delapidated warehouse was just round the corner. 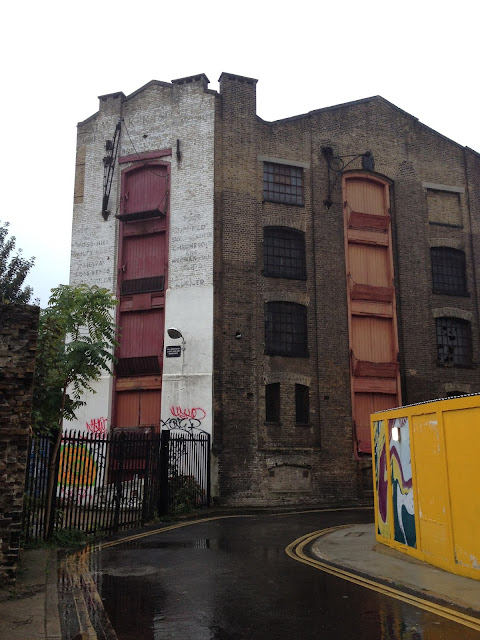 It was wet and misty and all the tops of the buildings were in the clouds. 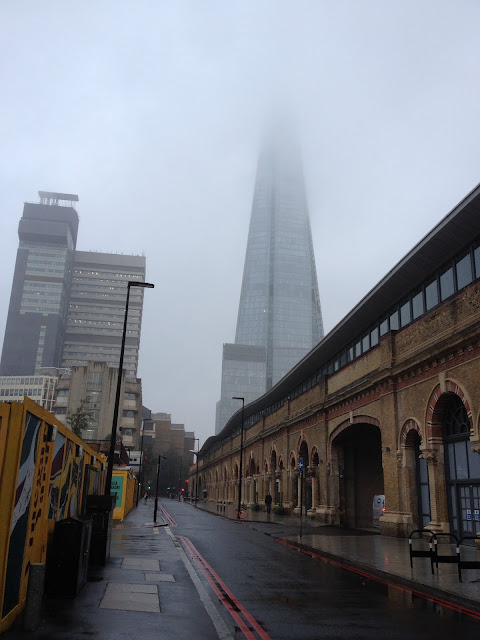 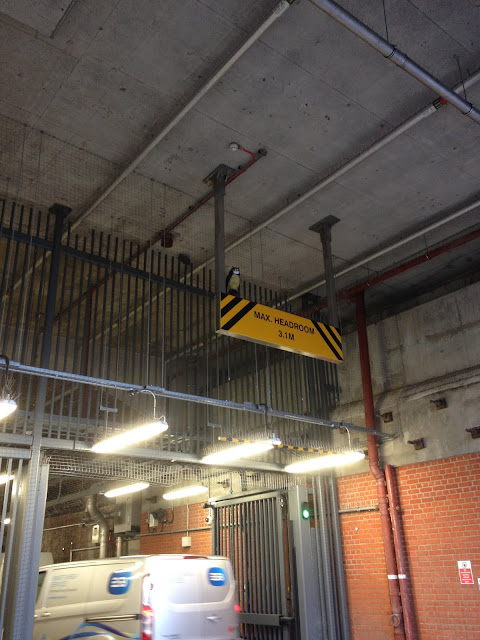 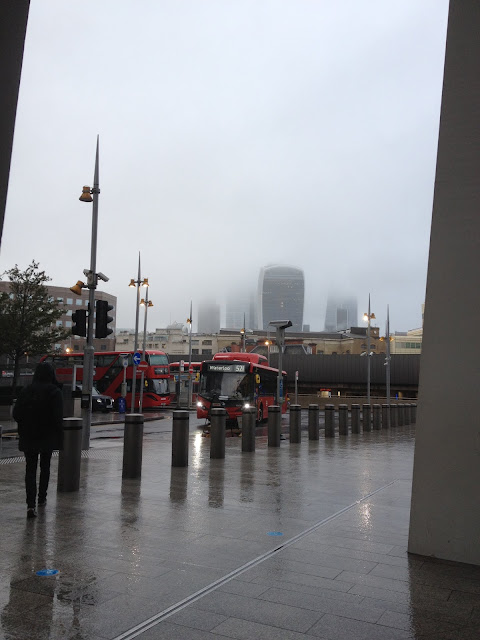 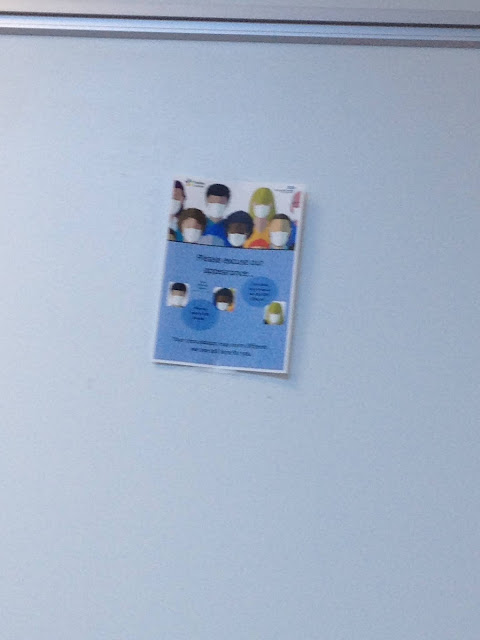 I liked this poster. I was sitting too far away to get a good picture but you get the idea. 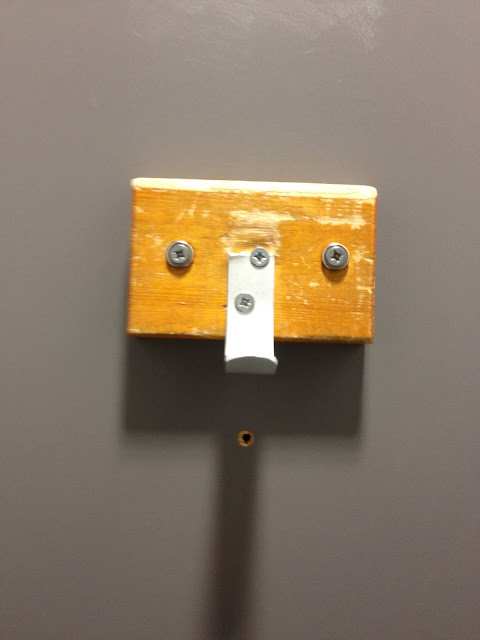 In the loo. Too like a face not to take its picture. 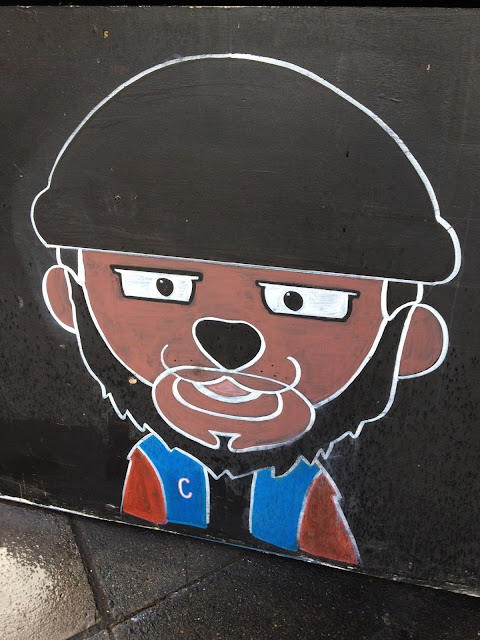 At the coffee van where I got coffee when I had finished in the hospital. 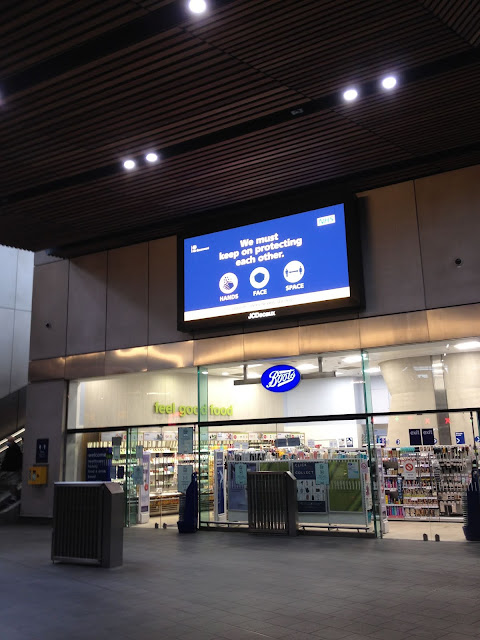 Hands, Face, Space. No people in shot as it was really quiet. On the train too. 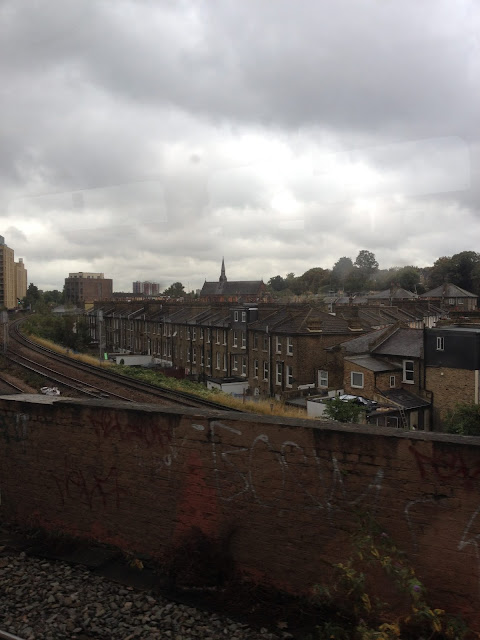 The train stopped on the way to Lewisham and showed me this view. I got the train there to feed this week's cats who live right by the station. 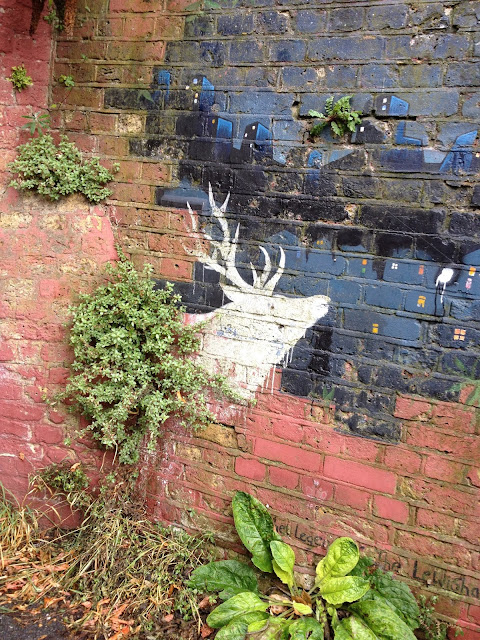 I got slightly lost on the way to the bus home. I thought I might walk to Blackheath as it is not far but I went up a street I have never been along and ended up on the heath rather than in the village. This was in the underpass which was my way out of the dead end street. It was worth getting lost as I like it a lot. 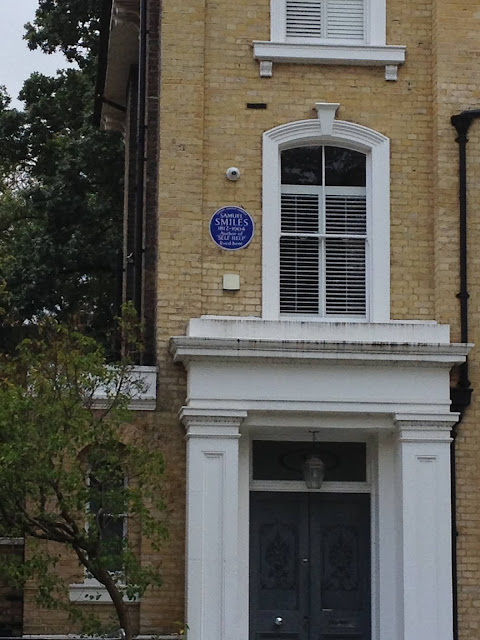 The street that the underpass led to was a how the other half lives place. Massive Victorian mansions, possibly flats but I think some were whole houses. I came across this blue plaque to someone called Samuel Smiles. A great name I had not heard of. He was a Scottish author and government reformer. He thought that new ideas rather than new laws would lead to more progress. He wrote a book called 'Self-Help' which promoted thrift and attacked materialism, and cited hard work and education as the route out of poverty. All sounds pretty sensible to me! Sensible Sammy Smiles. 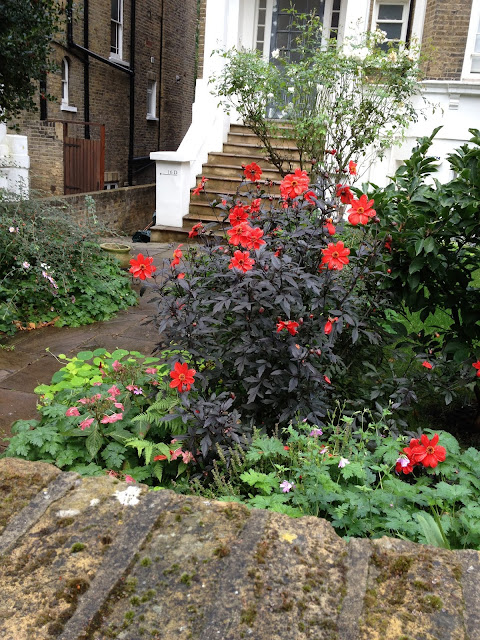 These two gardens were my favourites. 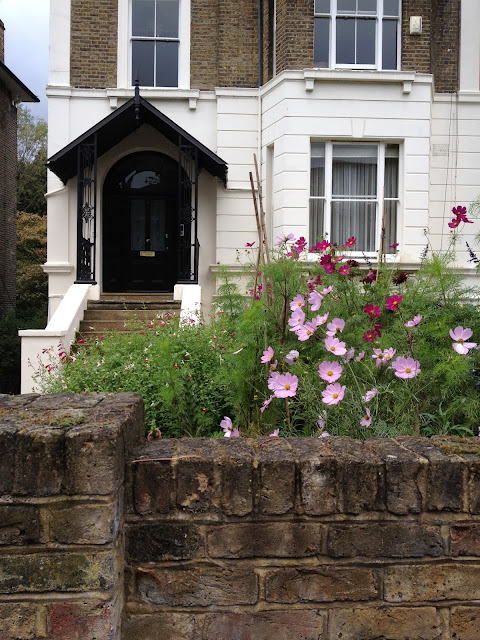 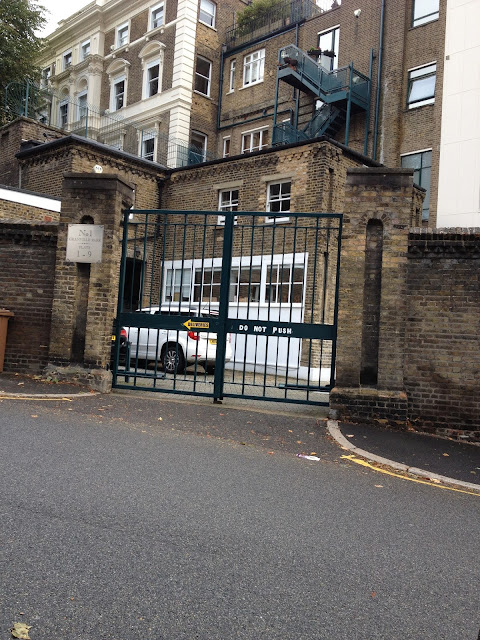 Not the village. Looks like the edge of the world. 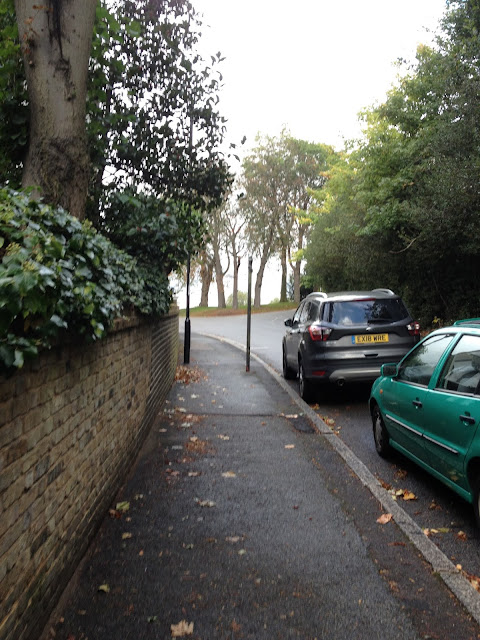 But was the edge of the heath. I walked across it to get a bus. One drove past me even though I was at the bus stop. So I got one of the ones that goes everywhere. It went back across the heath then terminated in the village. So I had to get another one. I should have just walked all the way! 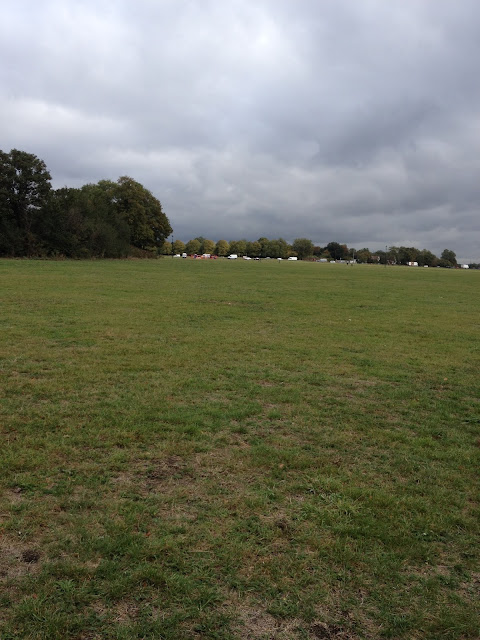 Giant ants! I hate ants, even fake ones. They love me, they think I'm lunch.
I like the flower gardens.