Yesterday we visited Canvey Island in Essex. We have not been there before and so didn't know what to expect. To be honest, fish and chips by the sea was one of the main reasons we went, and it was delicious, eaten in the car with a view of other people eating fish and chips. We couldn't see the sea from the car as it was on the other side of the massive sea wall, as Canvey is all below sea level. In the floods of 1953 59 people were killed. The entire population of 13,000 were evacuated, but those unlucky 59 didn't make it. The sea wall was built after this. The population is around 40,000 now, living in 7 square miles. There are a lot of houses!
Modern Canvey begun in the 1600s when the Dutch came over to build dykes. Only Dutch was spoken there until 1700. There are two houses left from this period but we didn't see them this time. Its name is thought to be Anglo Saxon in origin, meaning 'Canna's land.' There is archaeological evidence of Iron Age and Roman occupation, and the Romans produced salt there. We only saw a small part of the island and I would like to visit again to explore more, and also when the tide is out.
Here is the part we did see! 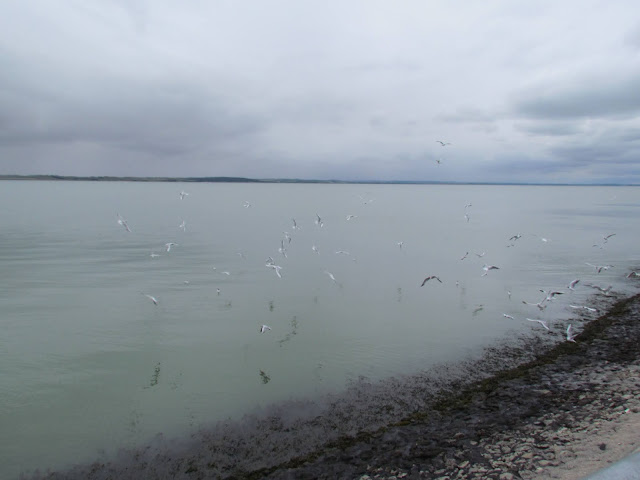 The water looks so soft. There were people and a dog swimming further along. There was lots of seaweed, so maybe it is fairly clean. 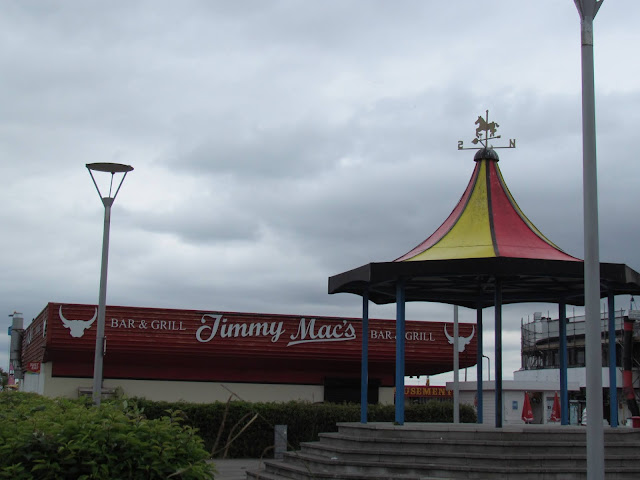 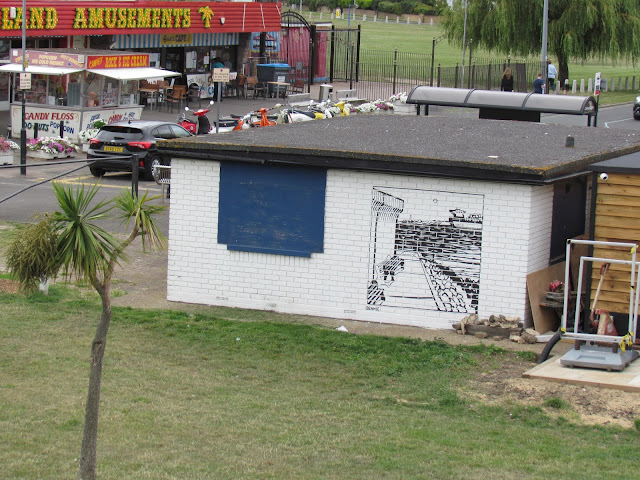 This is part of a sweet mural on the sea wall. 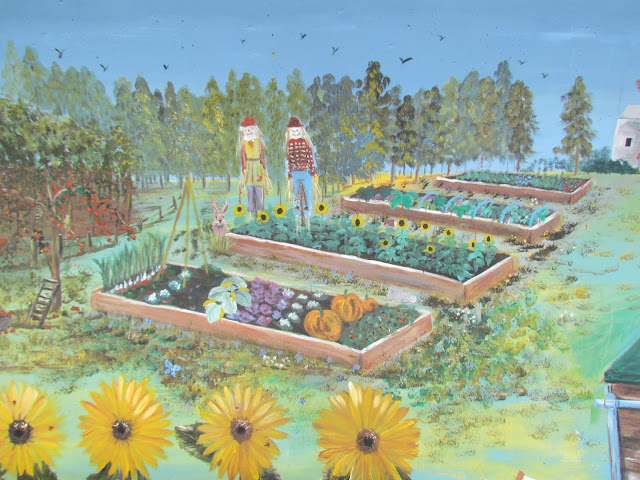 These three girls in their matching outfits looked so sweet. 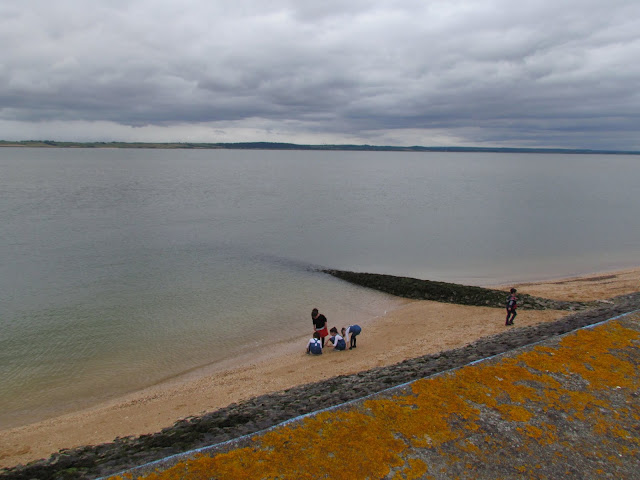 This is the top of what I would think is a nausea inducing ride that goes up, then down a bit, then up a bit more and so on. 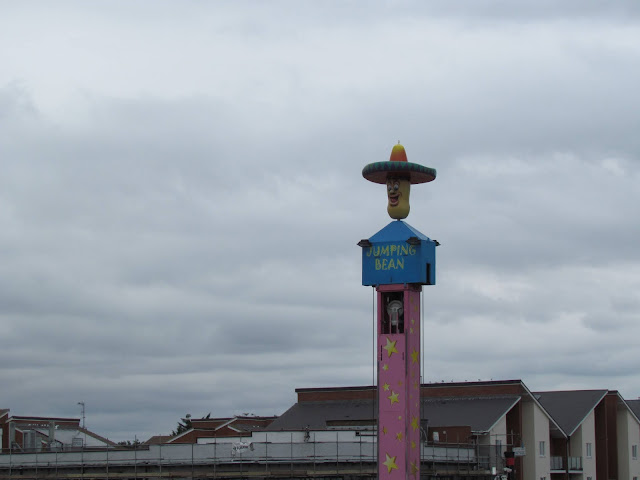 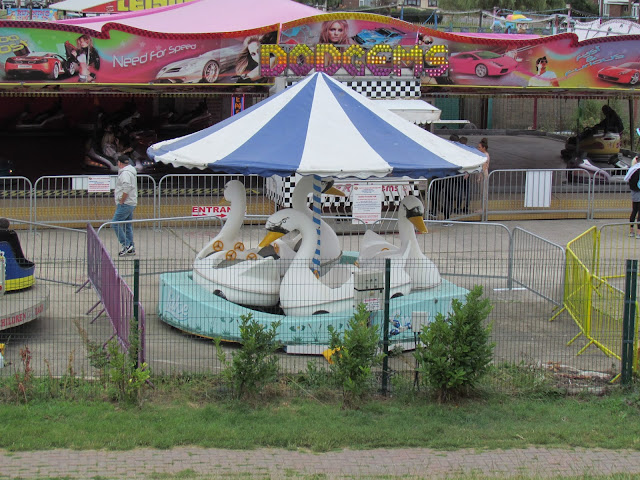 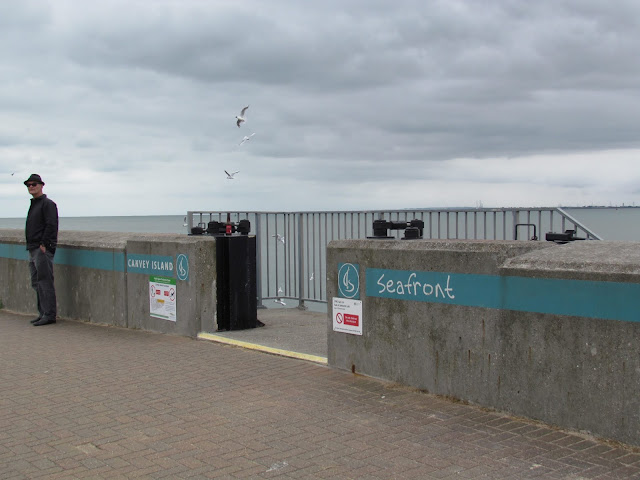 Industrial scenery across the other side of the estuary. Not sure where. Possibly the Isle of Grain. 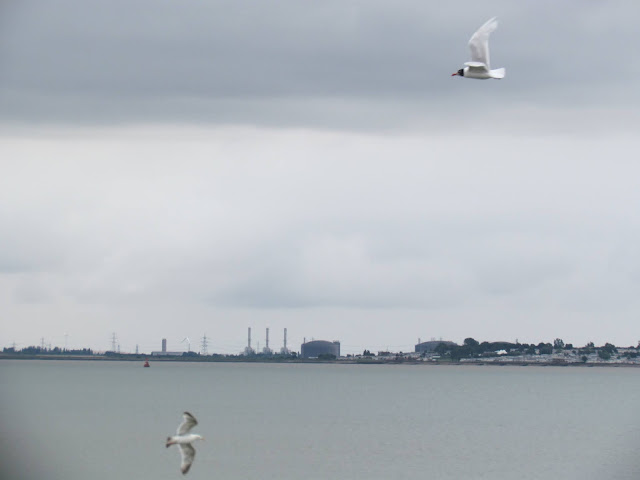 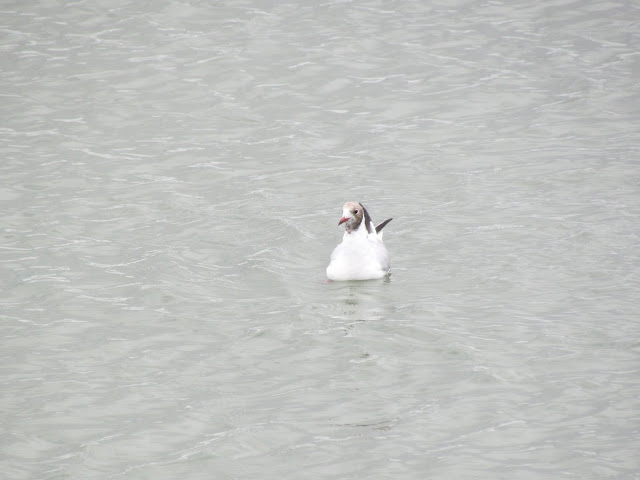 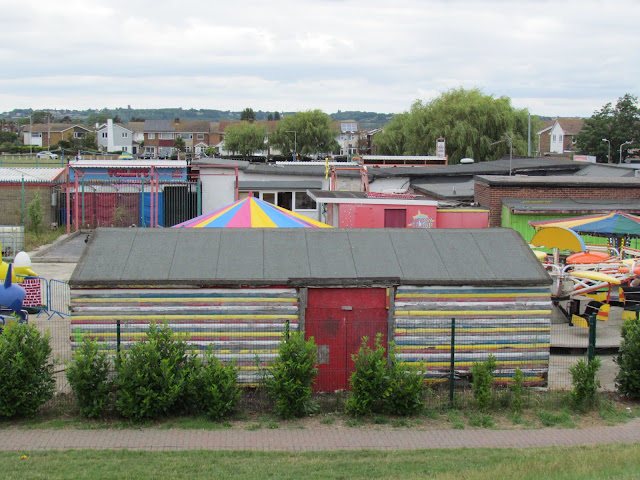 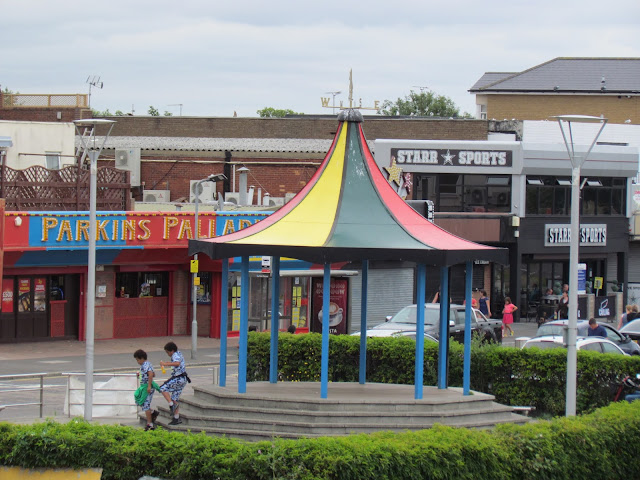 This rose was one of a number of plants along the side of the steps up the wall. They were in memory of someone. 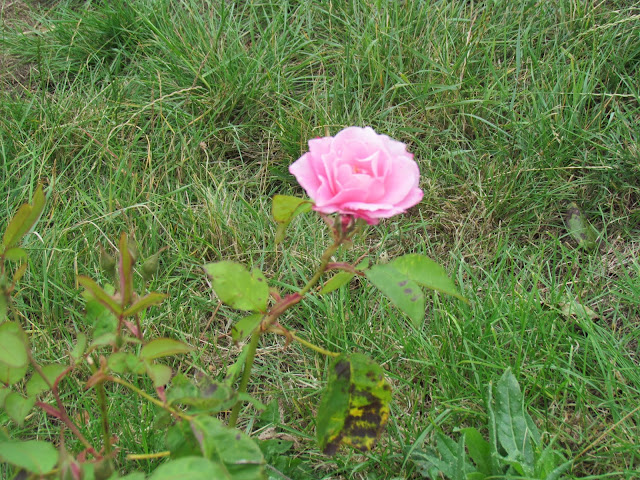 Just in case you were thinking of having fun... 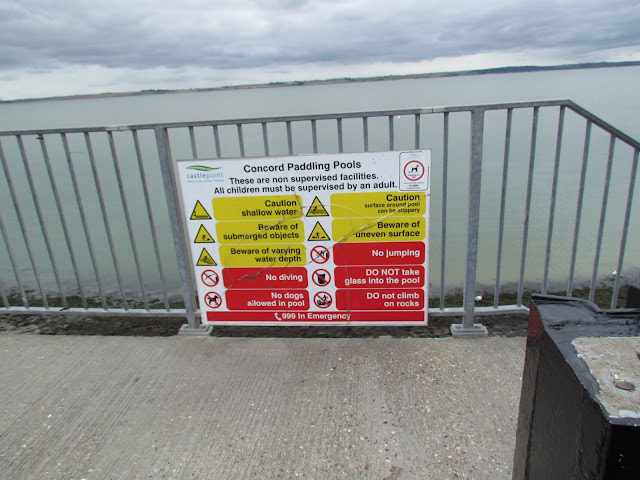 Just in case you didn't want to have nightmares about someone watching you while you paddle... 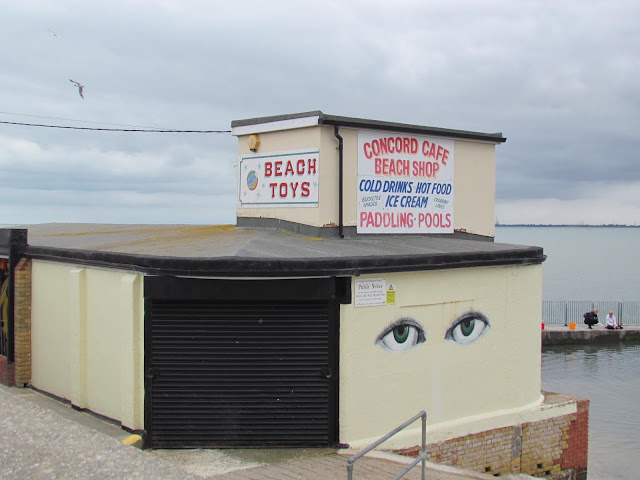 This is one of the paddling pools. They are actually a good idea, meaning you can still paddle at low tide, and reasonably safe, despite the warnings. People were catching crabs in them too, so maybe there should have been a warning about nipped toes. 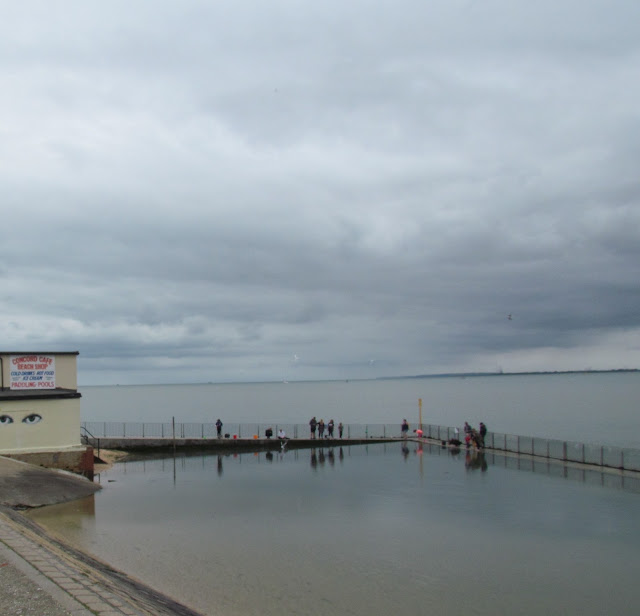 I love the names of this couple, Bill and Doll.
You can see the sea from their bench, as it is on top of the wall. 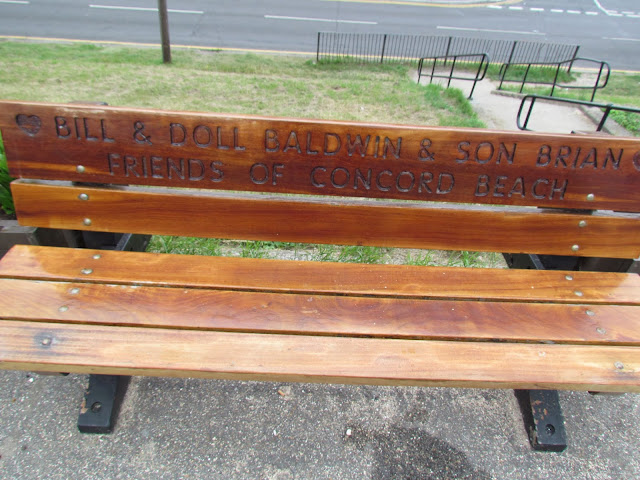 Looks like a fun outing! I really need to find a way to explore a little more. I've never heard of this town -- but I'm not too keen on the idea of living below sea level. Makes me think of New Orleans.

I know I very unkindly mocked the neighbor who was pre-planning a beach vacation in Belize, but I have just written to Linda Sue suggesting that when All This has abated and we can fly again (will our wings grow back?), perhaps we could meet for tea in London---or fish and chips on the shore!

Are you game?
Maybe Steve (above) could come too?!

A girlette will soon be flying to you---I've been out of work while the thrift store detoxifies (I hope)... I mail things at the post office near the store, so ... soon!
She wants to go to see things, she says...
(Warning: a girlette can come off as very demanding. But if you set her up where she can watch cats and the goings on at home, she'll soon settle down.
They're very adaptable and amenable.)

That would be great! Definitely game. I look forward to meeting whichever girlette decides to travel to see me, and will try to make her feel at home!