Stuck in the Mud

Ages go I got told off by a man watching me on the foreshore when I nearly got stuck in the mud. It stayed in my mind when I was planning another mud larking doll. She kind of developed as she went along. At first all I wanted to do was use half a broken bottle to make something. It had a good shape and colour. The doll is just a head and wired rope limbs. She ended up like this as her hands became a pair of earrings inspired by Frida Kahlo. Not sure what happened to her feet! I was going to make a doll on the theme of drinking as the bottle says 'LIQUOR BOTTLE SCOTLAND' on the base. I used wax to make the edges less sharp, and also thought I could stand the doll in it as she only has wire for feet. Then, as I was playing around with her to see if she would stick, the second idea occurred to me. The wax was like mud. I tried colouring some but that looked horrible so I didn't use it. I had already had a search for the bottle with no luck, but had come across information about sailors making macrame covers for whiskey bottles. I used this idea to make her shawl, using a very simple macrame pattern I learnt. Her black dress is made from a piece of oilcloth I found at Dungeness a long time ago, which was the perfect surface to write the quote from the man on the path. Her hair is made from the same cotton yarn as the macrame. She is wearing a St.Christopher pendant I found lying around as it seemed a good idea just in case. The wire M, and that around her neck is also from the foreshore. 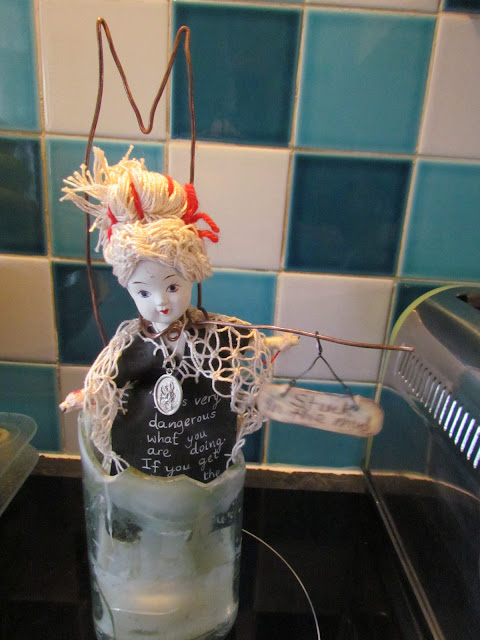 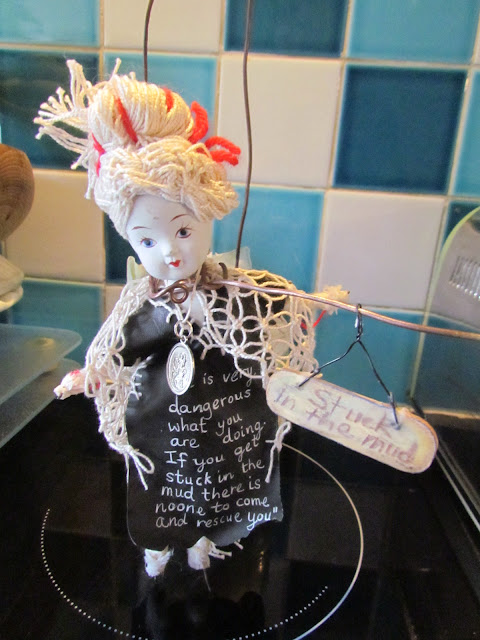 I see lots of watery (muddy?) connections, including St. Christopher--didn't he carry the baby across a stream?
(I had to look that up. Yes, he helped others across too.
I don't think I ever paid attention to the painting "St. Christopher Carrying the Christ Child" by Hieronymus Bosch before. Wow--it's great--there's a fish and his walking pole has a W /fish-mouth––shaped top too.)

I hope you don't mind me saying---once an artist friend said she didn't like people to analyze her art.
Personally, I'm always curious what people see in things I've made--often unintentional on my part.

I remember the post about the man yelling at you--it made me aware that the shore could be dangerous. Like life...
We could get stuck with no Christopher or anyone to help.
Poignant...

Did the sailors make macrame so the bottles didn't break? Interesting!

Interpret away! I like what you saw and now I can see the fish too. And the netting. Also didn't know too much about St.Christopher, just that he keeps travellers safe. Will look up the painting now. Yes they did. I think it may have also been a case of something to do like scrimshaw.

I am glad that you have headed the grumpy man's warning, I would hate to lose you in the mud, though that would make a wonderful story. Your dolly is wonderful, more treasure for the shelf!

I definitely don't want to get lost in the mud! It is so easy to put your foot in a sinky area!