Last Saturday we took a trip to the seaside for the first time this year I think. We went to Warden Point on the Isle of Sheppey. We go to Sheppey a lot, but have not been to this particular part before. I probably did when I was a child but I don't remember. My Mum's and Dad's families are from there, and had farms almost next door to each other. Mum grew up there and I lived there for a very short while at my Nan's house I think. 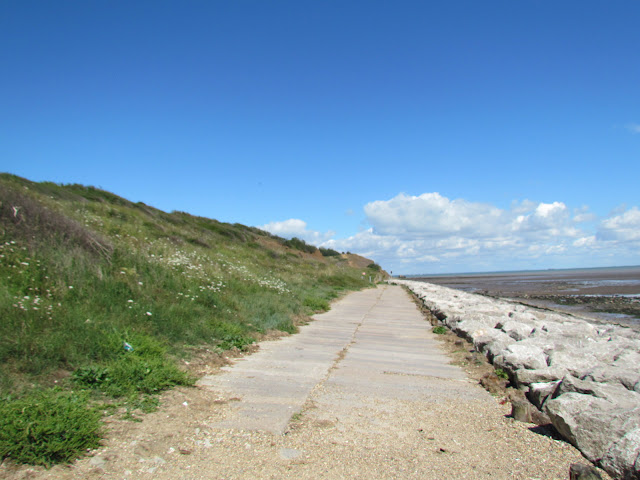 I saw this site about fossils, so that was what I was hoping to find. I didn't find any, apart from a big one, but the place was lovely. We got there quite early, to coincide with a falling tide. There was nobody on the beach, apart from a family camping further along. (Unwisely placed, in my opinion, under one of the more fragile looking pieces of crumbling cliff. It is made of London Clay, dating from around 52 million years ago, and containing around a million years of sedimentation. There are all sorts of fossils, plants, animals and fish. Looking again at the pictures, I would say that you have to really know what you are looking for. I did find some gypsum though, which I had learnt about from a mud larking video. It is a sulfate crystal and is found in sedimentary layers. There is a lot of information about it, most of which I don't understand! It is very pretty though, and the pieces I found were glimmering in the top layer of clay. It reminds me of mica pieces that I have used in craft before. 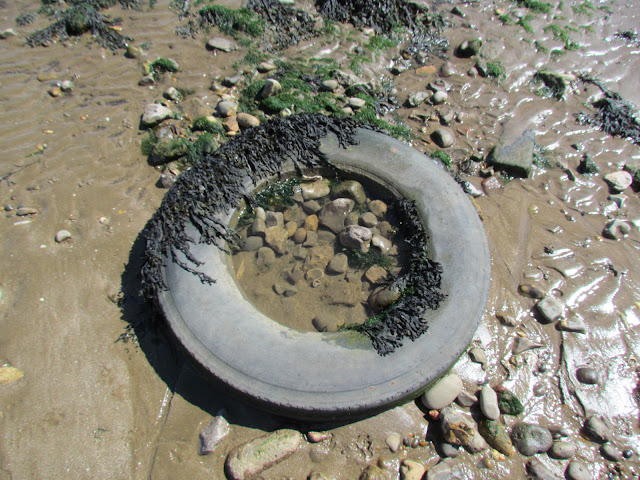 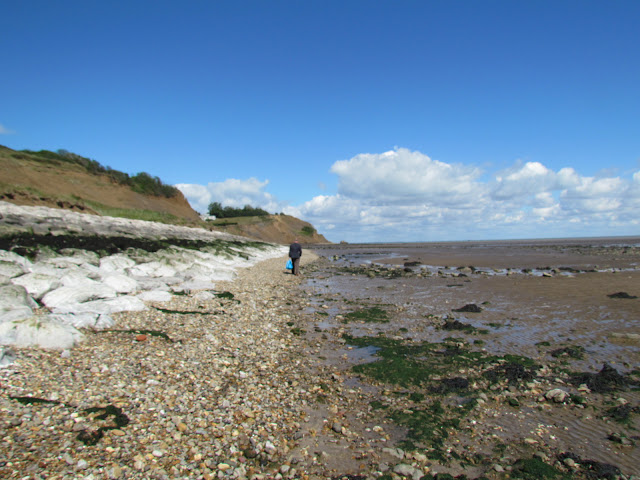 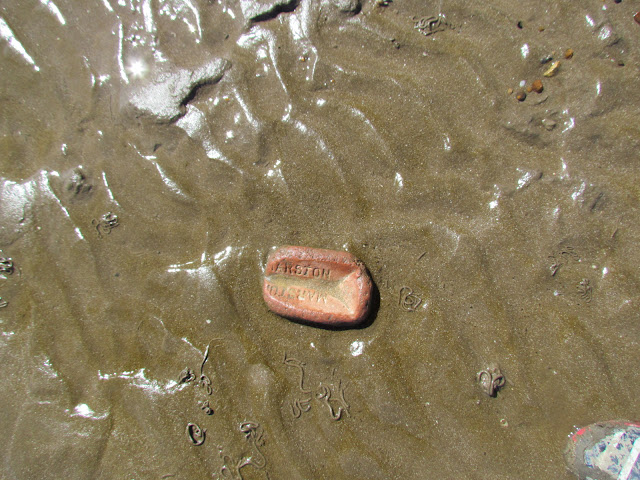 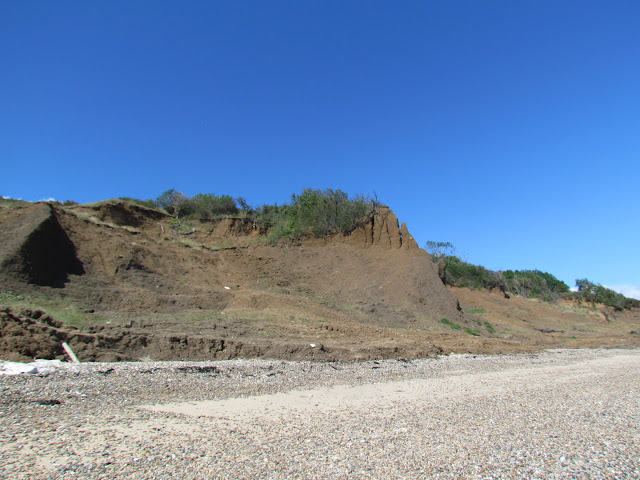 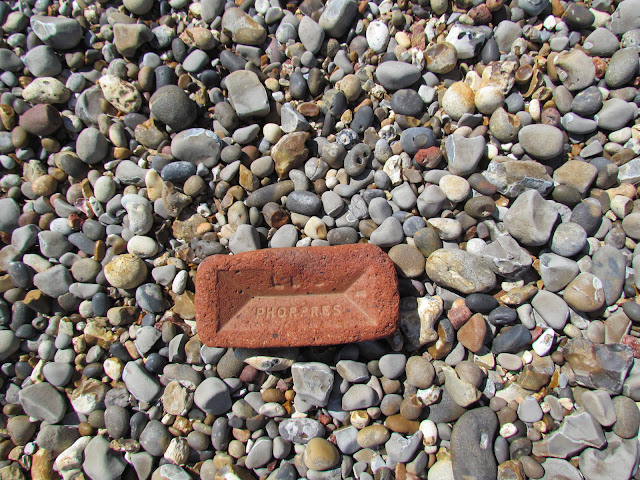 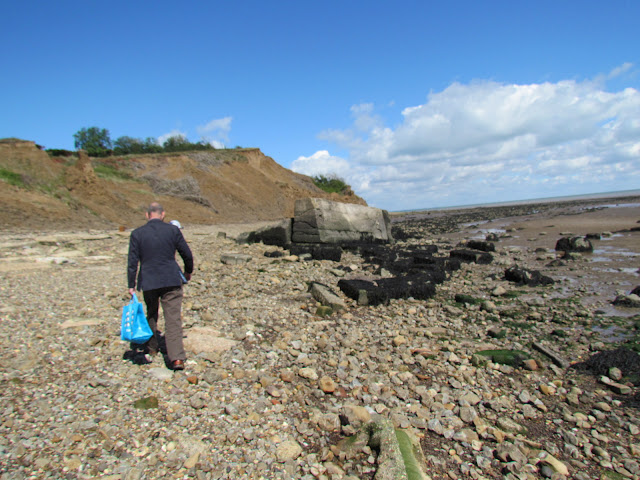 Andy is always ahead. I am a dawdler, taking pictures and looking for stuff! 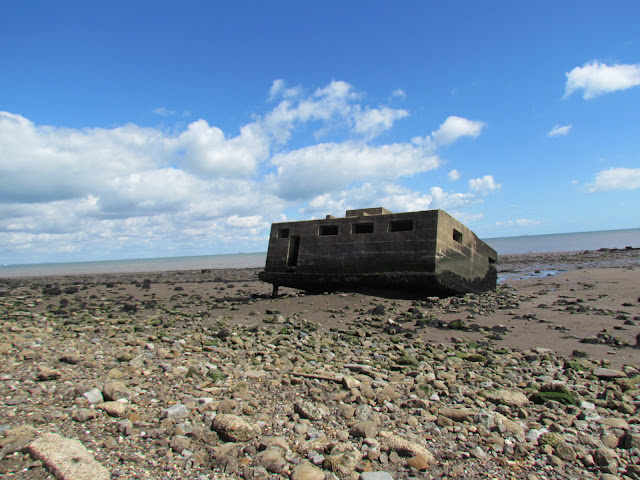 A military building from the war, built on the cliffs but now on the beach. Andy is disappearing around the other side of the building. 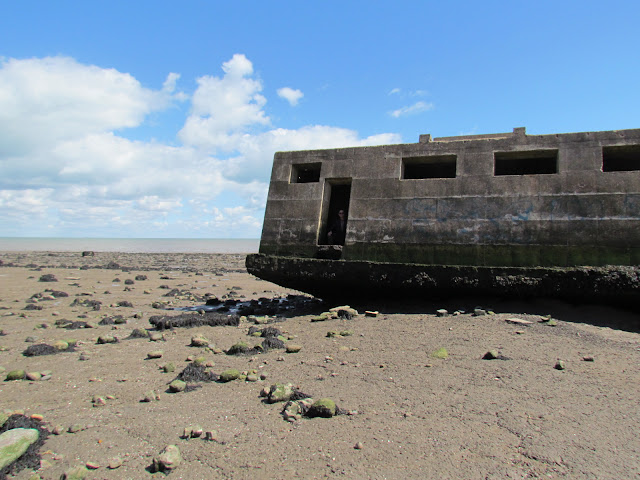 And reappearing inside! I didn't dare, as it looked very slippery and I was wearing wellies. He said there were steps inside, but I don't think I could have got past the entrance part. 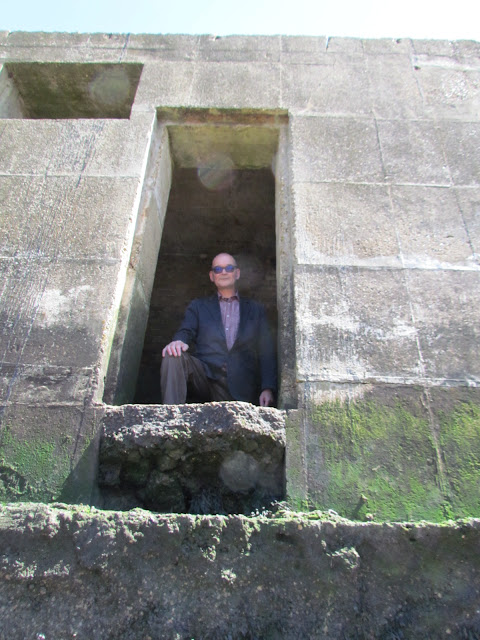 Would you believe he took the picnic bag inside?! I was filming him coming out, but had to put the camera down to help him, and the first thing that appeared out of the door was the bag! 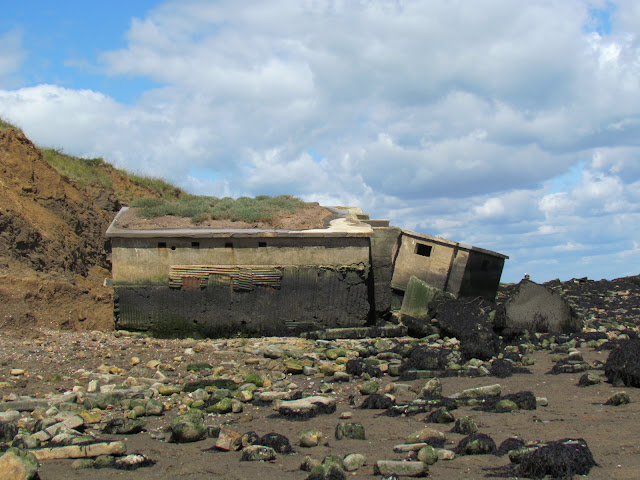 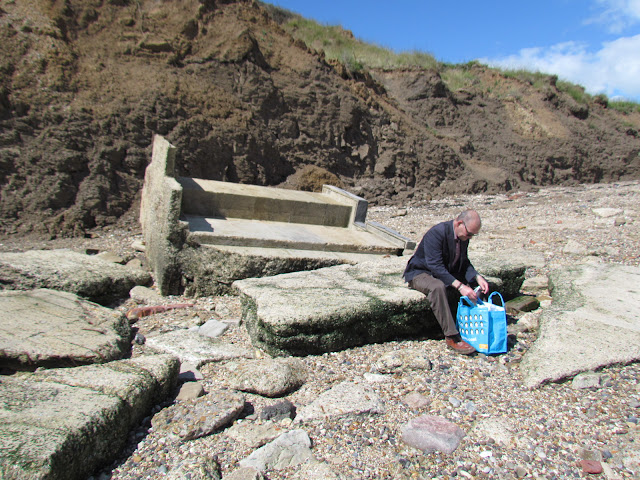 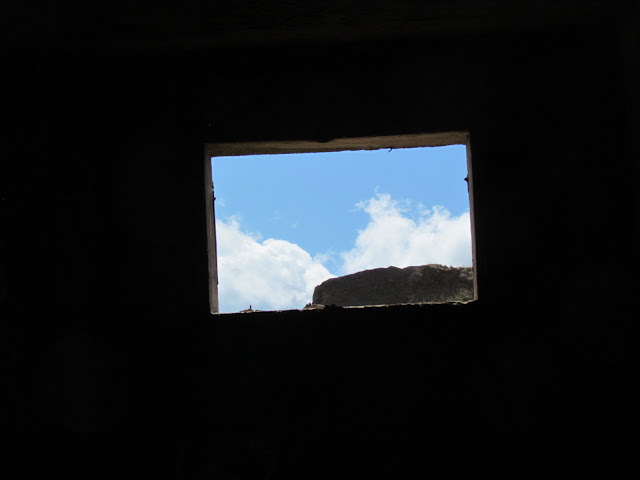 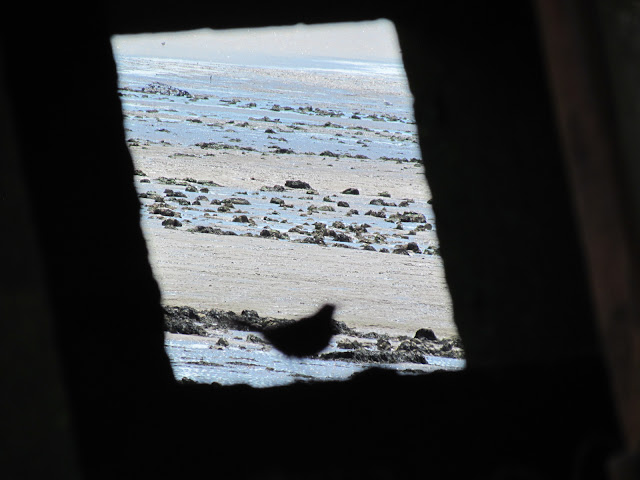 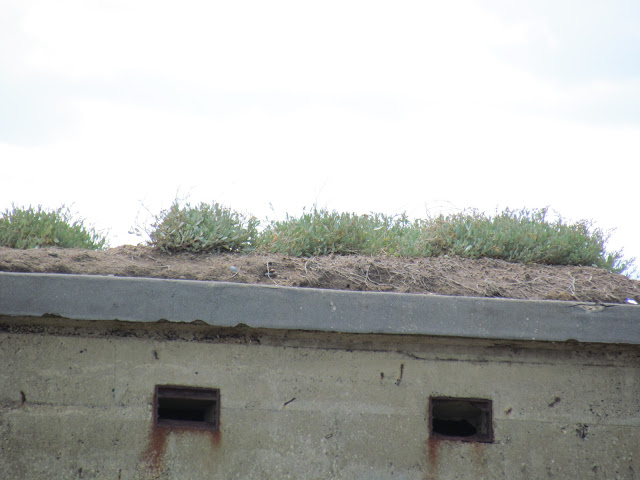 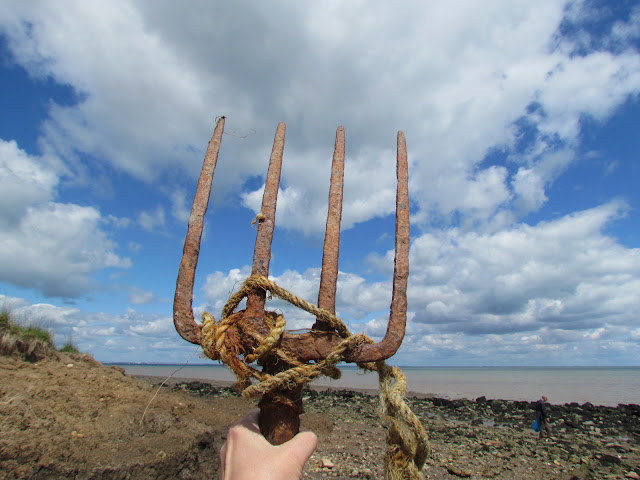 I left it behind but love the rope coiled around the rusty tines. 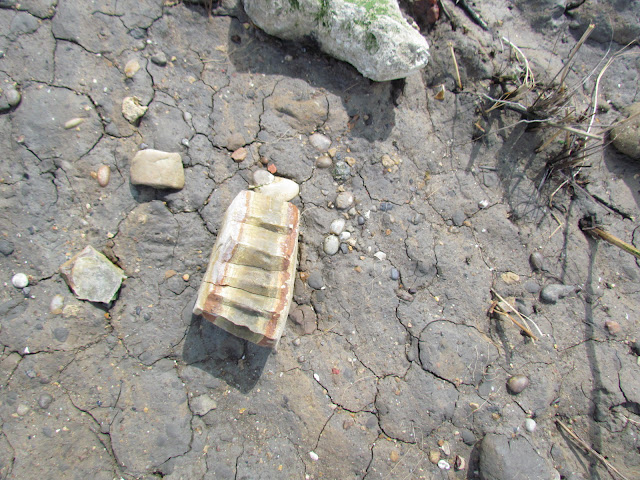 There is lots of rock like this. I don't know what it is but it is beautiful. 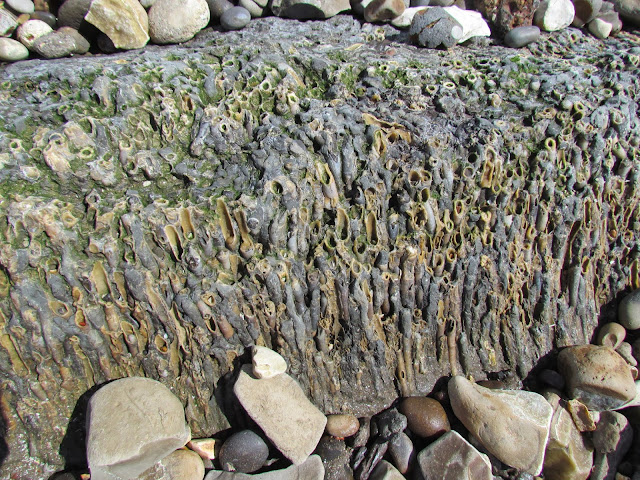 This is my immovable fossil. Looks like worm casts. 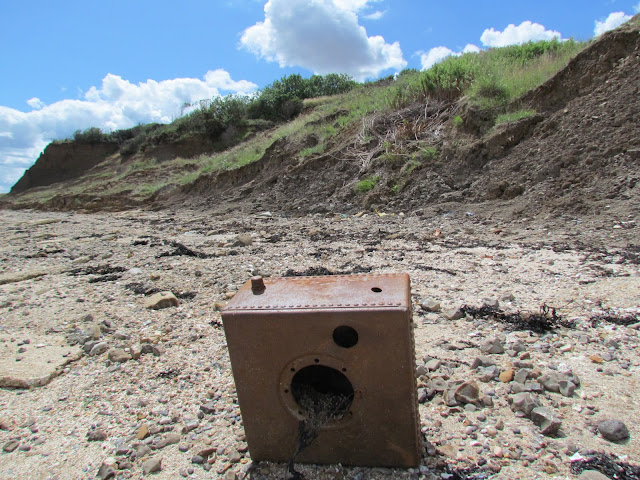 Not sure what this is but I like it. 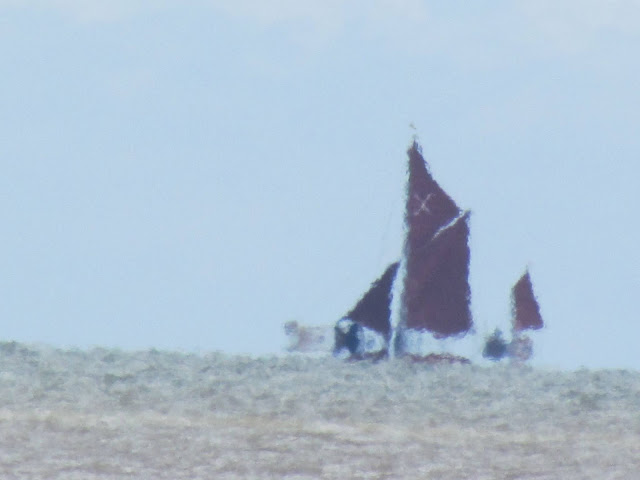 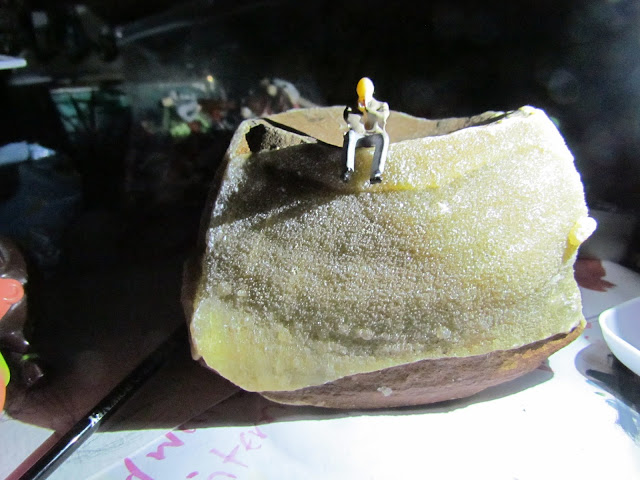 Little man on a rock. The yellow layer is only on the outside. The bottom is mud.
Posted by Sarah at 04:02

Poseidon's trident with an extra tong, So cool, I would have brought that home! The tyre wreath- I would have had that too! and of course the rusted box, You must go back and collect those things, if Andy can carry the rather large lunch he could manage a truck load of "trash" from the sea, Good to see him! Love the one in the window, very 007 looking, in his smart jacket and shades!
Such a curious shore- wonderful dirt and stones, fossils. Sheppy - take me there next time, OK? I must believe that there will be a "next time".

I've wanted to visit the Isle of Sheppey. I even looked it up trying to figure out how to get there via public transport but it seemed like a slog. (Enough to discourage me, at any rate.) Wasn't there a big house collapse there a couple of months ago, where a cliff fell into the sea and took a house with it? Or am I thinking of someplace else?

Thank you for taking us along to the shore.
A lovely outing.
But... I was waiting for

I said to Andy that I would take you there next time Linda Sue!
There were bacon and egg sandwiches and coffee. They were very tasty!

Not sure about the big house Steve but it wouldn't surprise me!
There are s few stations. Perhaps you could stay overnight in one of the caravan sites. There was one just on the cliff above where we were the other day.

A bacon-and-egg sandwich with coffee on the seashore sounds fantastic!

B&E sandwiches aren't really a thing here in the US Midwest---you can get something like it ("Egg McMuffin") at McDonald's, but it'd be unusual to take them on a picnic.

May I ask, how do you assemble them?
On buttered toast?
Or, mayonnaise and fresh bread?

On buttered toast. Omelette and bacon. We took that because it was a breakfast time picnic, which is a first!

What a wonderful place! Thanks for sharing it.