The chamomile arrived in half term, but due to lack of time I only got around to planting it yesterday. This is the ground prepared last week-I have endlessly dug over, added compost, removed stones, and last week added a lovely layer of topsoil and some more compost. I dug a trench around it mainly to mark the area but hopefully it will stop the snails munching away on my little plants. 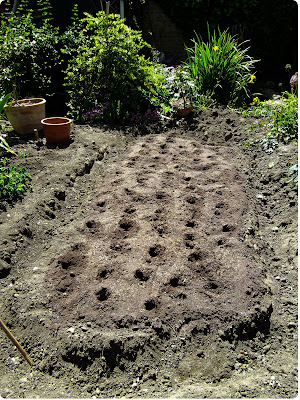 This is the chamomile I had left over-I think I will fit it into the gaps, or I might do a pot of it. 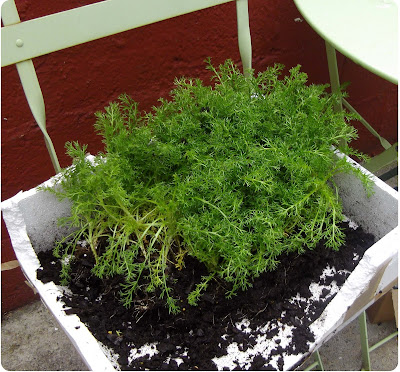 The information with the plants recommended planting them at about six inch spacing. I did this, then watered them in carefully. It is supposed to take about two weeks for them to settle in, then they will start growing and spreading out to fill the gaps. After I watered them, it started to rain-and rained for the rest of the day, all last night, and up until lunchtime today so I hope they are not too drowned. 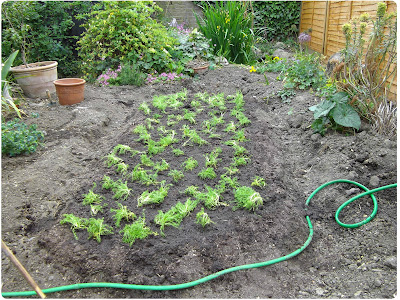 I think I will gradually fill the trench around them with sand, then gravel or pebbles of some sort and maybe plant some of those ice plant type plants-their name escapes me at the moment. I have now also bought a bamboo-to start my dream of having a screen between us and upstairs. It is a lovely plant-like a small tree! Cassie started complaining yesterday-so we tried the normal things-a couple of treats-some biscuits, some food, a fuss-but no-I think she was telling us off because it was raining! (Lily also does this-as if we can stop it!) In the end she just gave up and went out anyway. She spent quite some time sheltering in the empty compost bin, then just got soaked looking for frogs!
Posted by Sarah at 13:51

So nice to see your kitty and your garden- I LOVE how the resin things turned out- they are awesome! You could probably sell them on ETSY to journal makers- Love the little hands! And the picture with the lace- WOW!

You are making good progress! I wonder if I can find a spot to have a chamomile lawn - I like the thought of walking across it with bare feet, in the early morning dew!

A chamomile lawn... that sounds so dreamy, Sarah! Be sure to show us how it grows and gets on. Sweet Cassie...she does look a bit put out. ;o) Happy Week ((HUGS))

we are gardening too. our little hopeful plugs are of low creeping flowering thyme!

it's looking lovely over there! can you share the rain?

I love chammomile! It's so pretty, just like tiny little daisies (my favorite flower), so I'm thinking a chamomile lawn would be wonderful!

Your chamomile lawn is going to turn out so pretty!

I like Lily's idea, she's clever! Thanks for sharing this, very interesting indeed!