Alice met her Aunty, Anachronistic Alice, who was sitting on a table with her friend the White Rabbit. He was worried as usual, as he was late for something important. Aunty Alice had to rush off with the rabbit, but before she went, she told Alice a story about going on a journey to a strange land, with talking animals, and Queens made from playing cards. 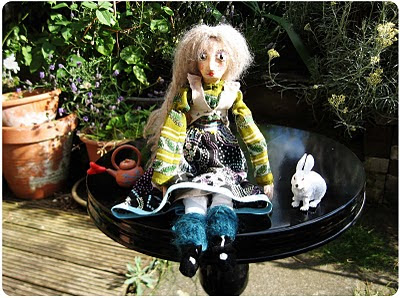 Aunty Alice showed Alice her journal page, a picture of a Queen wearing a china dress. The writing said that she was just like the Queen in Alice in Wonderland, except that she smiled. Alice listened to her Aunt, wondering, as usual, what on earth she was on about. Ah well. It was always interesting to see her. 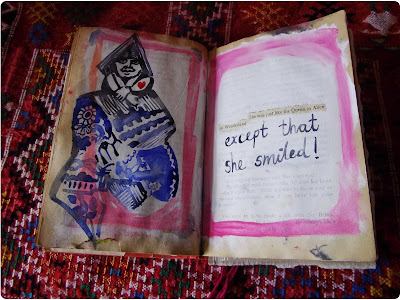 When her aunt had gone, Alice felt very tired, and instantly fell asleep. 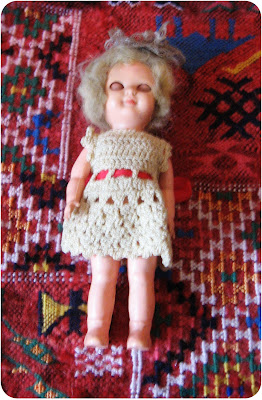 
She wondered if she was still dreaming. 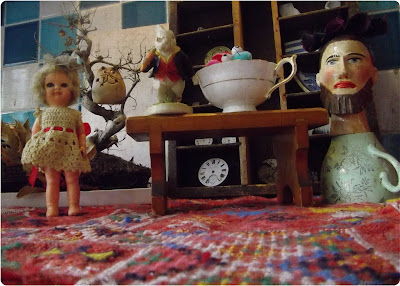 There was a terribly mad person using a teacup for a chair. There was another white rabbit, standing on the table! ''How naughty!'' thought Alice. 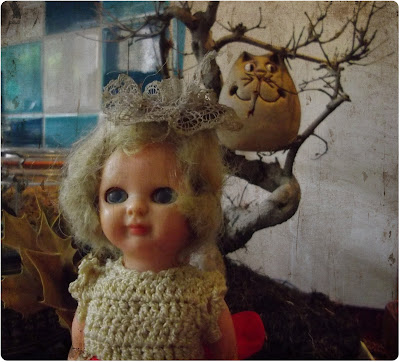 There was a friendly, but slightly disturbing, cat in a tree, that wouldn't stop grinning and kept fading in and out of view. 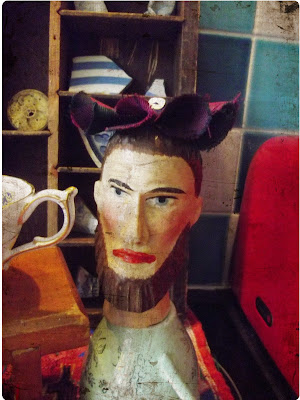 The wooden man on the chair was wearing the funniest hat. 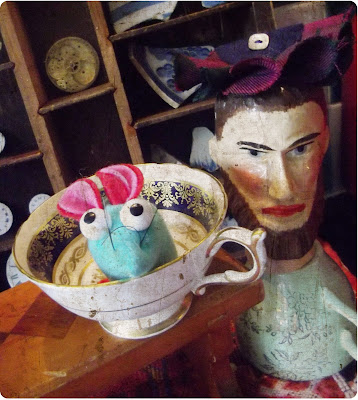 ''Could I have a cup of tea please?'' Alice asked. But as she spoke, a little dormouse popped his head out of the giant teacup! He had been fast asleep in there! 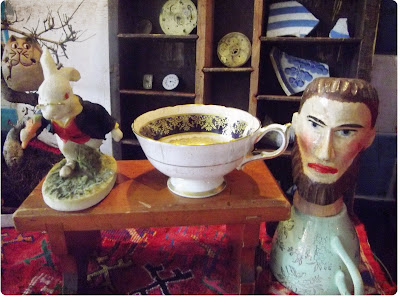 What a day! Alice continued to dream and dream. She dreamt of many other parties, all starting here at one spectacular party hosted by Vanessa! ''Oh this is such fun'' Alice thought in her dream. I hope I can stay asleep long enough to visit all of these parties!

Your blog is interesting, has left a great impression.
Best wishes
Jonas

what a wonderful party! thanks for inviting me!!!

Yes, quite the odd time, but so much fun for Alice and me! What a delightful time! Thank you so much for inviting me over!
Hugs,
Terri
http://artfulaffirmations.blogspot.com/2011/06/mad-tea-party.html

Such a fun party...thanks for inviting me along.

I had a lovely time. Thanks for inviting me! Twyla

What a hoot! Love the tea party. I just may have to return the favor. ;)

thank you for a lovely tea party! i love the dormouse!
cheers
lisa

Adorable! The almost hidden kitty in the tree was darling!

I hope you'll stop by my party.

I love the cats and mouse, your party is so pretty!

I'm also taking part in the Mad Tea Party blog hop and hope that you'll visit my party to have some fun there too :)

I loved this post! All of your photos are fantastic and I love your art journal. Great stuff! Hope you're having a nice day and are enjoying the madness,

So sorry I am late
For this important date.
But you're the thirty first blog on the list.

With too little time
I'm leaving this rhyme
For I'm adamant about wanting to persist.

All this running about
Has left me dry in the mouth.
Might I have a cup of that tea?

The rabbit, the door mouse
and all who are here,
make me wish I could stay and be.

Oh my, the time
It goes so fast
I must be on my way

But fear not friend
I shall return
Please……Have a beautiful day.

What a lovely tea party, and I love that little dormouse :) Thank you so much for inviting me! ~Lauren

I had a lovely time at your tea party. Everything that I saw and did was great. I hope that you will visit mine.
momentsinaneye.blogspot.com

I love your reinvented characters! Very clever! Thanks for sharing!

Sarah, loved your figurines and your party.

So much fun! I loved your party.My lion? Well,you caught me-I just found it on the internet-EEks! so nice to "meet" you from so far away. Denise

I have enjoyed your party very much.
Happy UnBirthday to you !
Blessings,
~Myrna
http://daylily777-myenchantedhome.blogspot.com/2011/06/mad-tea-party.html

Loved your tea party! thanks for inviting me :)
xo,
Karla

How cute, Sarah! I love your white rabbit and the doormouse! I couldn't find my stuffed mouse to use in our party. Thanks so much for visiting my tea party!

What an amazing tea party, loved it :D

Thanks for stopping by my blog xx

Yay! This was fun...I loved your little dormouse - cute! Thankyou so much for hosting a lovely tea party x

Fun! I love the dolls, especially the carved character.

I'm having so much fun with all of these parties. Thank you for sharing this adventure.

I have a little party of my own and gifts for all of my guests. I do hope you can stop by.

Your blog post made me laugh and laugh. Well smile broadly and smile broadly. It was great. Creative and fun. Thanks for doing this for us. *smiles* Norma
p.s. it really was fun!!

Thank you for a lovely Mad Tea Party visit for this grandma and grand kids. We so enjoyed your intriguing characters, your lovely tea set cup, and your fun book. Thank you.

I am in love with the tea cup sitter- he looks smart! What a great adventure/party, it will give me dreams tonight I am sure of it!
Awesome, Ms. Sarah! As usual!

What a great storyteller you are. And what lovely images! Love the header.

What a fun party! I love the aunt of alice! Sorry for being late(like the rabbit)! Do drop by for some tea!

Incredible!!! I like Alice, but I must confess, the wooden man with the funny hat caught my eye. Great party post! I loved it.

It was nice to visit with you today....If you'd care to drop by and say hi, I'm leaving my Sunday's Link for you---HERE

Have a glorious week ahead.

What a fabulous Mad Tea Party! Thank you so much for inviting me - I enjoyed my stay. Enjoy all the festivities!!!!

What a wonderful Woodem Man! So stiff upper lip and all... thanks for your visit and thank you so so much for inviting me to this GREAT party! It's always a treat!
Candace

Oh I meant WOODEN... mmm. might there BE a Woodem Man? Let me check my records!
C

Your Tea was the Absolute best Sarah! Especially, I like your "set"!!!
What fun!

I have checked out the older Alice's adventures and wonder if younger Alice may fall into similar behaviors. She seems curiouser and curiouser enough!

I love all the fun guests at your party! I'm glad I've visited so I could meet them!

Please visit with me when you have a moment:
http://gossamertearoom.blogspot.com/2011/06/mad-tea-party-2011.html

Oh my word, what a fun time I had at the party. The guests were just wonderful. Thank you for such a great time! Ros

Such a wonderful and magical to-do, thank you for inviting me over to share your tea and enchantment!

Great party and I like Aunty's journal page!
Thanks for having me!

You are such a love!!

Thank you for sharing your slice of Wonderland with us!!

Thanks so much for inviting me to this enchanting tea party! I had a lot of fun! I hope you will visit my tea party as well!

What a wonderful tea party with so many mad guests! Lovely Alice. Thanks for sharing, Michelle

I felt as if in a dream, too....thank you for letting me sneak in :D

So sorry for the late arrival to your tea party, I'm slowly making my way round them all.

Such a fun tea party it was too, I loved all your little characters.

very cute story and props :) thanks for the invite, please come visit my party :)
Susan