I don't usually do much cooking. I am lucky enough to live with Andy who does lots and is pretty good at it too! I am prone to burn things and to forget they are cooking at all-which is maybe why they burn. 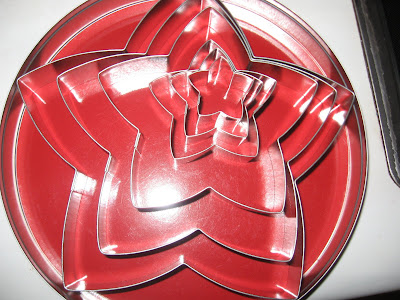 These star cutters are designed to make a Christmas cake-you make a biscuit of each size and then pile them up and ice them. It looks very pretty on the tin but I have not tried it. They are the only cutters I have got so I used a medium one to cut out some stars. They are cut from flattened (with a rolling pin) white bread though I am sure any bread would do.
The cling film (Saran?) is to roll the bread in between. 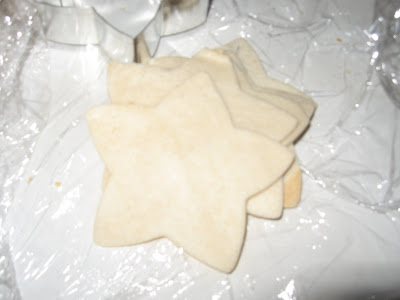 Next you brush each side of the shapes with a little melted butter-I melted far too much. 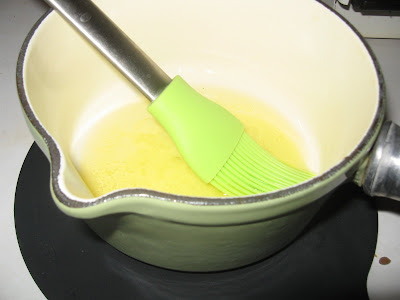 Then cook them for about ten minutes in a moderate oven(whatever that means-I put them on about 180C) They go nice and crispy. 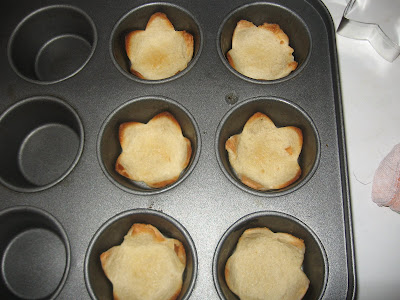 Then put whatever filling you fancy in. I was just trying them out and so put what I had in-a weird mixture of guacamole and smoked salmon-quite tasty. The woman who I saw on a cookery programme doing them had some kind of avocado and smoked trout mixture. I would tell you her name but I can't remember it-she is blonde, Irish and pretty and called Rachel something. 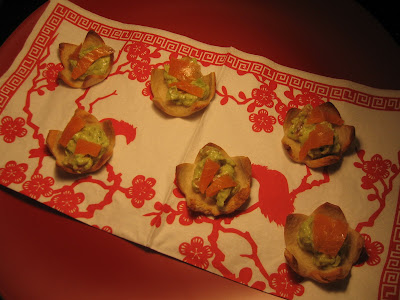 I was going to make them anyway but I made an effort to make them look pretty so I could take photos!
Posted by Sarah at 04:59

They look good. I think I might have a go, and amaze the Social Secretary with my creativity!

These look totally like something I can manage. And yummy. Thanks for sharing, Sarah! (Love that sleepyhead cat.)
Happy New Year.

Lucky you, having a man that enjoys cooking. Mine's quite a good cook but hates it! But he does cook for the dogs!
Like the idea of the bread with filling, I think I will give it a go sometime. Thanks for sharing it.
I also like the idea of the star cake, it's the sort of thing I would do.

Those look so yummy!

Yum, they look so tasty! And easy to make too - a great way to use all those xmas and New Year's leftovers ...

Hi, Sarah! These look tasty! Cooking is so much fun. I love experimenting with new things. Hope they were as tasty as they looked! :-)